This is a fantastic card that makes Idyllic Tutor seem pretty shoddy. Both are there mana 1 for 1 tutors than find the same thing except one has no board presence or tempo and the other does. You can play this with few targets or relatively unexciting ones if you so desire. The only time Idyllic is really that much better is when you have literally no use for a 3/2 body or when you have sufficient mana to be going off on that turn. Certainly both are plausible in constructed combo decks but in draft decks that is basically never the case. Sadly despite all this card's promise there are very few enchantments I am that excited to tutor for in cube. Enchantments lack the range and depth of most other card types. Sure, there are plenty of good ones but you struggle to assemble much of a cohesive tool box for any given deck using them. My cube lacking things like Oath and Splinter Twin feels like it might hurt the Cleric's chances too much to last. With some of the tools from MH2 it would be very easy to support an enchantment theme in any kind of cube and have it be pretty potent and not really that parasitic. This Cleric would be outstanding for such things. If we continue to get the kind of support for enchantments that we have been then it might be the natural progression for cube design. Urza's Saga is an enchantment after all... Moon-Blessed Cleric - the most circuitous Trinket Mage! 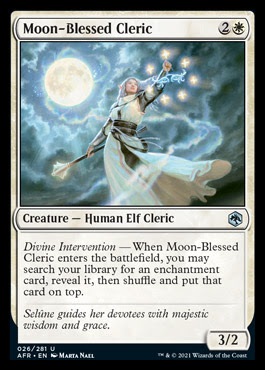 This seems very scary indeed. This has a very high threat level for a fairly low cost. I place it in the Rekindling Phoenix ball park of a card. Further to that the risk with this is pretty minimal thanks to being a pretty free discard or self mill win combined with the flash. This is how cube likes it's top end. This card is a threat with real reach. The damage is hard to stop and the creature is tough to answer. It gives you value too but again, in the right sort of way that doesn't detract from the threat of the card, indeed it actually adds to it. Policing the graveyard and exile quality removal seems like it will take a little boost to their values as a result of this set. 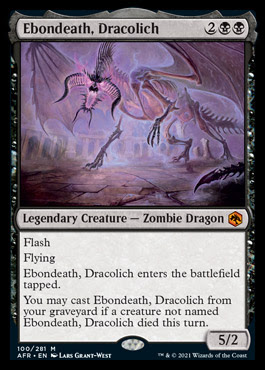 This all hinges on how intense the equip cost is. Before any need to re-equip occurs Rapier is all sorts of better than Bonesplitter thanks to flash and costing half as much to fully deploy. As soon as its first wielder dies and needs replacing the card is four times worse than Bonesplitter with an equip cost of 4! While a very long way from good at that point it is still a useful thing to have. A late game mild mana sink. A means to scale up specific dorks with evasion or other reasons to want more power even at hefty cost. I suspect this compares to Rimrock Knight roughly although I would expect it to be worse. A 4 to equip Bonesplitter is certainly a lot worse than a 3/1 for two even if the initial +2 pump is superior (thanks to persisting). The things giving this a chance are that red has good pressure and tempo meaning a combat trick like this goes a long way and often spirals the tempo out of control. So much so that you can expect this to stay on the first dork for some time if you desire it so. Additionally red has lots of stuff that appreciates buffs to power be that common first strike cards or more specific things like Dreadhorde Arcanist. Red also has some good sacrificial uses for artifacts which this supports nicely. I fear this again falls into the camp of being a little bit too much of a luxury card to last in cube but it is very close. Certainly well within the margins of error to get a thorough testing. 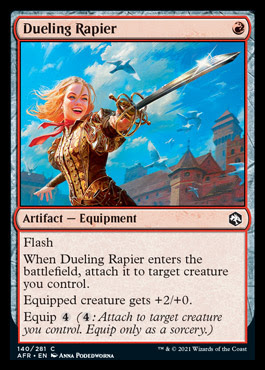 You Find the Villains' Lair 1

The bar for a 1UU hard counter is pretty high and without some pretty extreme synergy this isn't close to that bar. If this was only discard one card then we would be having a different conversation. As it stands you rarely can afford card disadvantage in your card quality, certainly not at three mana. The cycling 1UU counter seems wildly better in any sort of control deck where you might anticipate not wanting to hold onto a counter. And needing so many counterspells that you resort to playing three mana ones! The cycling counter also falls well below the stifle counter, the foretell counter, and both the scry and surviel ones. And they all fall a long way behind Supreme Will and Thassa's Intervention as far as utility modal three mana counterspells. Prospects for this are low to nil. 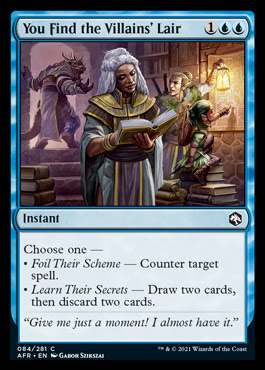 Tribal Ooze, proliferate, or a Hardened Scales type of deck for this. Beyond that it is clunky, easily answered, unthreatening, and not even good value. It can get a bit out of hand with the right counters synergy but even so, it is still slow and just churns out vanilla dorks. Good job it delays until end of turn else it would be a clean and easy infinite combo with any Hardened Scales effects. The delay keeps in more like a Pack Rat. It is certainly a fun card and does make me want to do some more counters build and that is a definition of a design win. 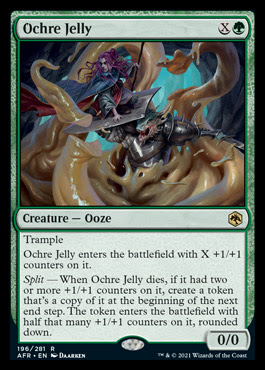 With just one of these abilities the Goblin wouldn't be quite enough, even for a goblin deck. With both it has a glimmer hope. The payoff of a 1/1 is pretty unimpressive for your fairly onerous pack tactics achievement. The pump is also pretty narrow and fairly costly. Hasting up a goblin that is at least two mana off curve isn't all that scary. Sure, with a card like Siege Gang this is filthy but that is such overkill. The Gang is fine on its own and needs no help. This card however is not fine on its own and just lacks the bite to appeal anywhere. It is the kind of card I look at a lot and think about putting in but then never do. I will likely give this a little test as I suspect it will do a reasonable impression of a four drop Rabblemaster come Usher of the Fallen if you have three attacking power already. That however will not be quite often or reliable enough and this will get cut never to see play by me again. 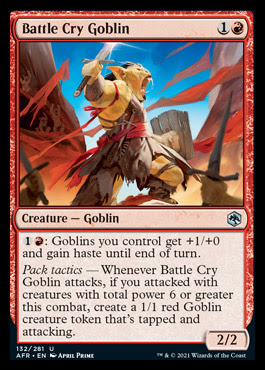 Powerful for sure but potentially too much of a beater to perform in cube. It will be rare to get a 2/2 token. Either this will eat some form of removal or it will be ignored until it can be handled in combat cleanly with a 2/4 minimum stat line facing it down. This will be a bit annoying. Smaller dorks won't be great at attacking into it and it will feel like it has evasion early. Coming in tapped does make it less appealing as a non-aggro card. The exile aspect is not to be underestimate, it rather shuts down a lot of cube cards and even if it isn't directly disrupting something with an on death trigger or in bin effect it is still taking away potential resources. I have this down as a very borderline card for my cube. My guess is that it won't last due to lack of a hardcore aggressive plan in my black presently but it could well just be cheap, powerful, and annoying enough to get around that. Find a good way for this to do some damage to dorks outside of combat and Wight suddenly looks very dangerous! Chandra's Ignition for the win! 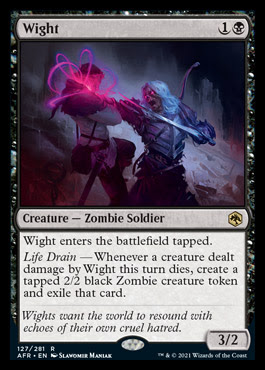 Lovely design. No good in drafting cubes as you rarely have targetted sideboard cards so you are generally going to be wishing for sub par cards well below your mana level. In constructed however this is a fine little spell. It will get plenty of things like Elemental Blast, Tormod's Crypt, Meltdown, etc. 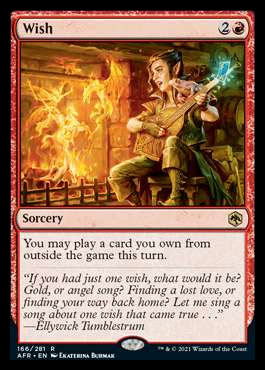 Stand alone this lacks power, both nominally and relatively. What this does offer is a cheap and playable support card to bolster the venture capacity of a deck. There will be a critical mass of venture cards within a cube that would make this something you might want to add. I doubt we will get all that close to the critical mass but for now at least this card has some hope in drafting cubes. 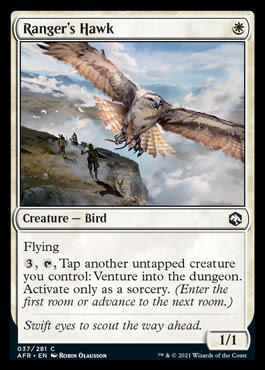 I want to like this but I feel as if the return from a dungeon level is fairly irrelevant if I can muster up six power worth of attackers... 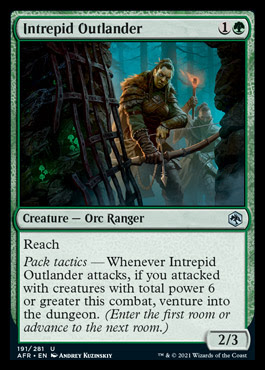 Cool, another Pridemate. This is worse for costing three and also for having a weaker stat to cost ratio. Redundancy however is always welcome and I will be playing this in basically any deck I am playing Pridemate in for the time being. Nowhere else though! 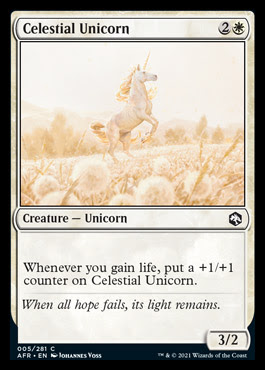 This is Claustrophobia on legs. You get flash and a near useless dork instead of an aura. I can't really see the perks of having it on a body. It is certainly easier to answer. With appropriate untap effects there might be some merit to the Dragon Turtle but if Claustrophobia isn't in the discussion then this probably shouldn't be either. 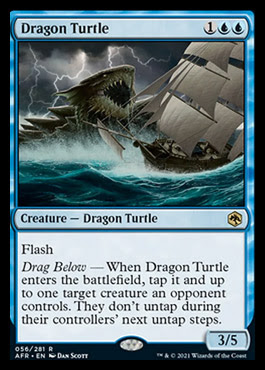 This name alone is grounds for being on a register. Oswald is however very powerful being a budget Birthing Pod for artifacts. Inability to use this immediately coupled with ease of answering a 2/2 keep this on the fairer side of things. You can likely do some pretty filthy things with Oswald and some affinity cards. Sac off Frogmites and Myr Enforcers you paid nothing for to fetch up some serious tools? There are not loads of artifacts in cubes, even in powered cubes, and Birthing Pod was already too onerous to build with needing quite strict curve discipline. If you can't make Pod work in a draft settig with an abundance of creatures you are going to really struggle with an artifact iteration. As such this is a build around only Probably around the power level of Goblin Engineer which is an impressive place to be. 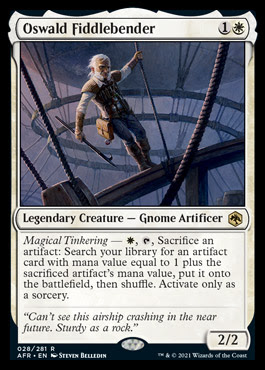