This just isn't good enough at doing the job you play it for. Play a good removal spell that works rather than lose because you chose to play this. It is sad because it really doesn't look good for the venture decks and cards like this can help glue such things together if they are competitive. Take Harnessed Lightning as an example of that in action. 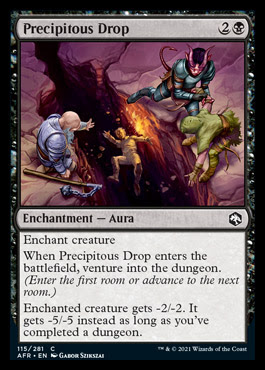 A dork Forker you say? In singleton formats this literally Forks them all which sounds very powerful. This is vulnerable, gold, and slow acting, but my dear god the power on this is silly. It is probably a bit win more. This would be so much more appealing as an enchantment (in much the same way Guardian Project is preferable to Beast Whisperer in my experience). As it is I fear you will just be walking into mass removal far too often using Volo. The power is pretty nutty when it gets going, it is value on top of huge tempo. It even greatly increases the threat density of your list. The extreme nature of the power means this needs to be tested but being so slow to act, needing of creature support, high risk and vulnerable, as a gold card, I can't see it lasting. That and a really high number of legends in cube that work less well with being copied. 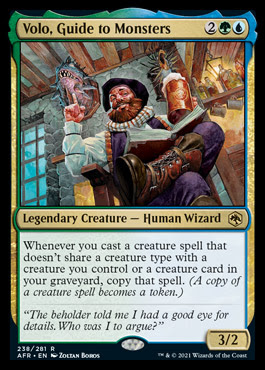 I really really hope this never becomes good. It certainly isn't yet. Krark's Thumb was a joke card for a long time... 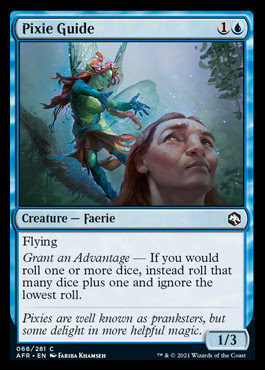 This is only being discussed due to being a cheap two permanents in one card. Likely to never be used as there are plenty of alternate options, most of which have more power or more obvious and appropriate synergies. This lacks both power (even with a high roll) and interesting uses. 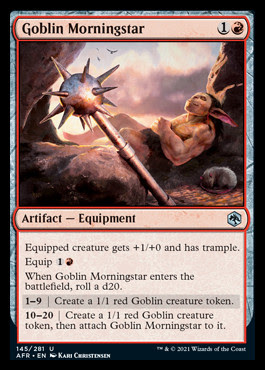 The Deck of Many Things 0

The power on this is thankfully sufficiently low. As far as stupid random swingy dice rolling cards go this is bad but it isn't the worst offender by a reasonable margin. The tempering of the dice result based on hand size is an interesting design space in that it slightly mitigates the inherent issues with dice rolling... 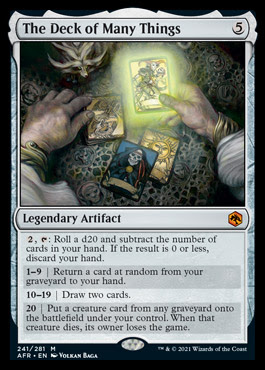 Nice to have a super all the undead lord card. This would have helped loads a decade ago before we stated to get reasonable redundancy in things. Much as this is quite broad and fairly powerful it is a four mana 2/2 that needs further mana investment to maximize. I want cheaper and more robust lords than this. Should be outstanding in more budget focused cubes. Skeletons is now the only lord light tribe on this long list but then there are absolutely fewest good cards of that type too. 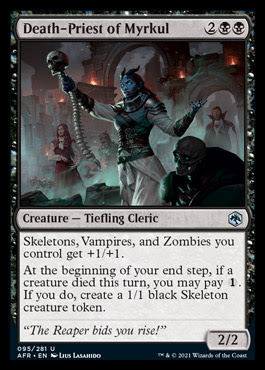 This is nearly there. Pre-Kaladesh it likely would have been one of the best pure card draw spells. Now it isn't even in the top 5 and as such should only ever see play if using dice synergies. I also hate it from a design perspective which does it no favours. This draws 2.05 cards and I think 1.15 scry. Even if my maths is off it is very much in that kind of area which isn't super impressive. Scry 2 draw 2 is better total value. 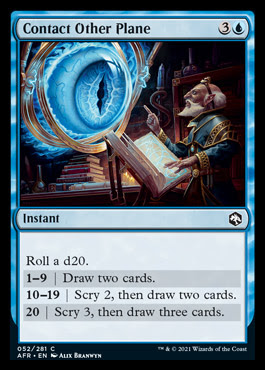 Speaking of dice synergies here is a reason to do such things. I'm not sure I can bring myself to do so, I really hate dice rolling in my games. This is fine with one trigger and gets good quickly with more. 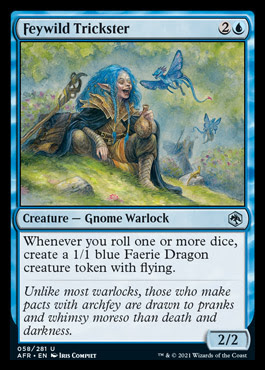 If this had haste it would be quite the card. As it is the risk is too high. There seems to be a lot of that in this set, very high power level cards that are tempered by risk. These are not great cards for game play and get the bad design label from me. Delina is powerful but undesirable. There is now a new achievement I don't care to unlock which is the Delina one shot where you just roll at least six 15+ results in a row and swing with seven or more 3/2 dorks. 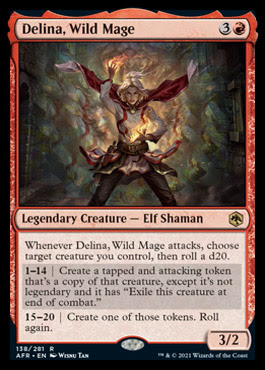 A kind of cleaner and fairer Thrasios, Triton Hero. The coloured mana in her activation makes her a lot less easily abused by the likes of Training Grounds. For normal fair use she is too slow for cube and will likely never see play despite being a lovely card that I quite want to play. 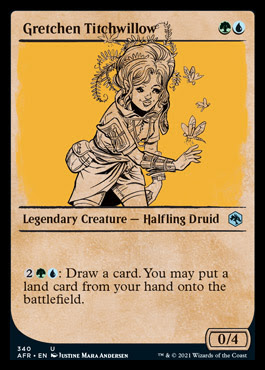 Used as designed (that being an undercost fatty with an untap clause) it is unplayable. It however has that ever dangerous combo potential of the word "whenever" with a zero mana ability. 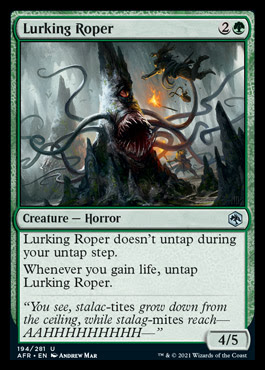 We are a long way from this being cube worthy but Hexblade is exceptional in a world where treasure is abundant. There are a couple of places I could imagine this being viable and it only stands to get better as more treasure stuff comes out. 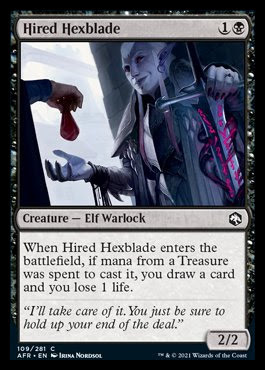 This is another card in competition for worst design, not even just in this set either.... So swingy and random. Magic is a good game because it is not like other awful games that have awful mechanics like this! This is a card designed for people who like Monopoly. Surely that is not the target audience for Magic? I have not played D&D but it is a team game and so one presumes cards like this are interesting because it injects the necessary random into the experience and because your team can cover when things go awry. In a 1v1 game this kind of thing is madness. It really seems as if the more extreme cards from this set should have been confined to the likes of a commander product. Some of the dice rolling cards would be better suited to such a place what with it being multiplayer. The power disparity between the modes is bad but the nature of the 20 roll is really tilting. I can both win and lose you the game depending on what you needed the card to do. I would be really sad to have to play this card in any format other than mental magic... 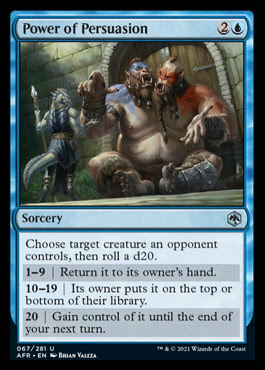