A Faerie Seer that trades a scry for being an artifact. Rather low impact to have much interest despite seeming like an OK support card for a number of possible builds. I feel like I am either playing a good one drop flier, a good artifact dork, or a Witching Well. The merge point of this card relative to those things just isn't a particularly desirable mix. Never rule out cheap cards than have things going on like this though. 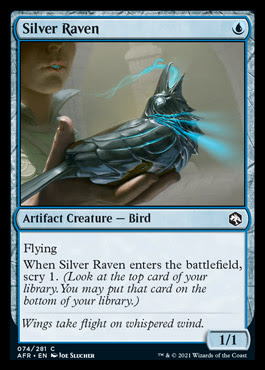 This sits somewhere between Cavalier of Gales and Dragonlord Ojutai. It compares more closely with the latter but in practice has to compete with the former in terms of chances in the cube. Ojutai is great and only really failed to last in cube due to being gold. Cavalier on the other hand has been a very solid and highly played cube card since it was first printed. Lymrith being mono coloured, and indeed only needing double blue rather than triple is off to a really good start. I also have to say I think I like 5 toughness and ward five when untapped more than 4 toughness and full hexproof when untapped. Five toughness puts it out of range of most red untargetted mass removal as well as being a lot more viable in combat. Ward 4 is really serious, prohibitively in most cases and severely detrimental in others. The combat damage trigger on Ojutai and Lymrith are really similar too. Anticipate vs. draw one to three cards. On average that is quite close (assuming Lymrth is is averaging 1.5ish cards) but I like the way Lymrith scales and delivers more in your time of need. Much as Lymrth is a total beating of a card I do still prefer Cavalier. The assured and immediate draw removes a lot of pressure on the body to attack or block however you like and with less regard to it's well being. It increases the overall safety as well as the immediate impact on the game. The on death trigger of Cavalier is pretty massive too and is a great way to increase the threat density of a cube deck. Lymrith requires a bit more hoop jumping and baby sitting to return value. Much as I rate Lymrith there needs to be demand in cube for multiple five mana 5/5 flying card draw dorks in blue as I really cannot see Lymrith trumping Cavalier despite being very close. I feel like there is room but even so, the redundancy alone will reduce the value of both cards a little. The main draw of Lymrith over Cavalier is that is has a better chance of staying in play so as to affect combat. Lymrith is a better board development card while Cavalier is a more reliable and safer all round card. 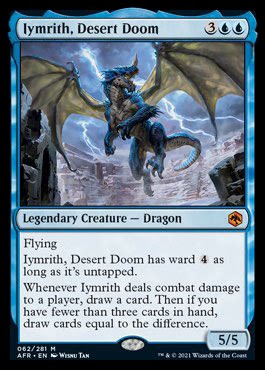 I don't know why but I dislike this card. It is just a beater and pretty dull while also being pretty top end probably being the reasons why? Forcing my way past this bias and I have to accept that this is pretty effective. This hits hard and gets out of hand fast. It is fairly big and nicely evasive. The ward mechanic also gives you a good feeling of safety. You are not just going to get blown out by dumping a sorcery speed vanilla beater into play. One hit with this and only premium removal will answer, two hits and that is rather game ending. This does 28 in the time Thundermaw does 20 and is rather more imposing too! I think mass removal and increasing numbers of viable chump blocking fliers existing in cube will just be enough to keep this out but absolutely close enough to be deserving of a good test. It is liek a Kalonian Hydra but with the main drawback (of being vulnerable to the likes of Go for the Throat) addressed. 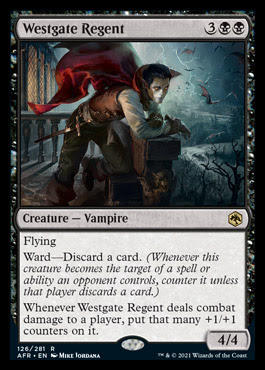 This is all a bit overcost to get much of a look in at any sort of cube level. You could lop a mana off the cost at each stage and I would start to have interest. It does have a fairly cohesive theme with landfall mechanics but it takes up so much mana to get going that it is going to be hard to synergize with. You just won't have other stuff out doing things alongside this fast enough. If you want to steal stuff enchantments and sorceries are more reliable means of doing so. You don't need the extra tempo from the body as stealing a thing is already a huge swing on top of value. Safety comes above win more! This doesn't even seem better than Sower of Temptation. Sure, the size is nice to have and a bit safer but lack of flying makes it a lot less useful and the extra cost is pretty savage. I can't imagine playing this outside of exceptional circumstances. 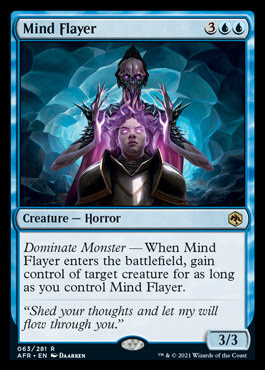 This is fringe playable. It has some utility to make up for the lack of bite on the power level terms. It isn't that much better than Arc Lightning and just down to being RR it is rather narrower. It isn't even that important of a spell to have assured against counter heavy decks. An OK card but not one I expect to see called up for duty any time soon. 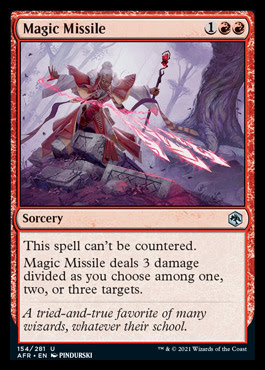 The Book of Exalted Deeds 3

A double whammy here. This is either winning you the game with lots of juicy flying tokens or saving your life with a makeshift Platinum Angel. It is a wildly narrow card needing serious attention to life gain, ideally some more angels, and a very white deck. Tick those key boxes well and this is quite the bomb. Fail and this is unplayable. A strong example of a pure build around card. 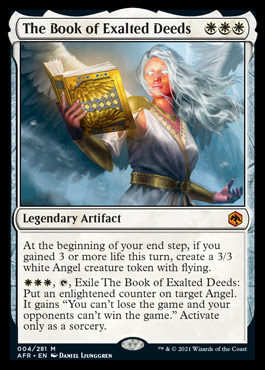 Temping in some respects but really hampered in potential with the sac limit set at once per turn. Type rather than the extra power is what gives this a tiny chance of some play. 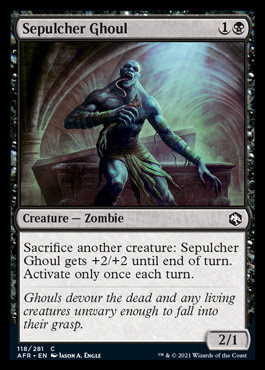 An outstanding class card and in competition for the best Anthem effects in cube. It is kind of only a single white to deploy the Anthem despite the total cost being 2WW thanks to the first white being separate. The first ability is excellent as well. It will help a lot against reactive decks, those with counters and instant speed removal. It will give you more confidence for using equipment if nothing else! The final mode is also pretty devastating. The cost isn't a bargain but it isn't at all unusable or unreasonable. It packs a lot of punch and turns basically everything into a threat. A lone Suntail Hawk will hit for 4! Better dorks and more dorks scale that output decently. The Anthem is a thing you want and it comes with free extra disruption and extra reach. Great card. 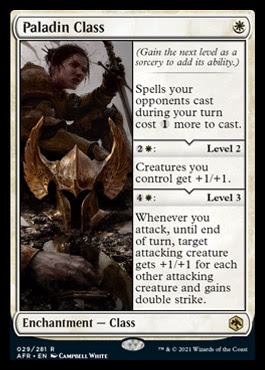 The levels on this work quite nicely together. One and three work in unison to generate card advantage and tempo via mana efficiency. The middle stage gives you some nice stall to help contain the tempo losses from setting up the other effects. I really like the way this looks like it will play and the kind of deck it would encourage. I want to play this in a kind of prowess deck, either Jeskai or Azorius. This is certainly too narrow for drafting cubes. While you can build around it effectively I can't imagine that leading to a high tier deck. Enticing, flavourful, and really fun but a little bit fair as cards go these days. 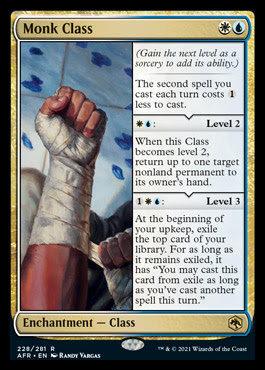