Part III to follow once I have English language card images to use.

This is a bit of a Consecrated Sphinx crossed with Terferi (the creature). Locking your opponent out of casting in your turn is nice and getting free cards is also nice. They don't pair up brilliantly but that isn't what ruins this card. Nor is the power level which is outstanding. It is simply that this is a six mana investment that gets you nothing at all when answered. The more I look at Xanathar the more his threat level rises, certainly well above Sphinx even without flying. Sure, Xanathar is just value but the way you get that value doesn't deplete your overall gas while it does for your opponent. A Xanathar in play will eventually win regardless of the value. It is simply how risky he is that turns me off. Xanathar is exactly the polar sort of way to make Force of Will and Negation oppressively good in a cube setting. This dude will not look out of place in a cube and will win a tonne of games for you, it just isn't the sort of card or game style I wish to encourage. I don't think it will lead to better games and I think there are better tools out there to build with as well. 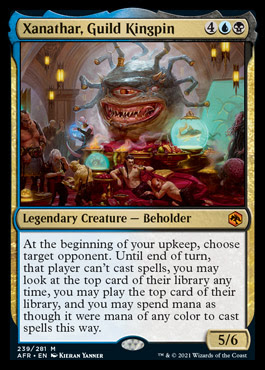 Clearly amazing. A land with a lot of threat and barely any drawback at all being untapped early and able to produce red. It is relatively cheap to use given what it offers and is very much on theme with what typical red cube decks want to be doing. Castle Ardenvale is the same cost to make a 1/1 token but it doesn't get to attack for 4 damage as well! This obviously brings us to the downside of Den which is that you have to attack with it and it only has 2 toughness. This dies to most things, be they blockers or Shocks. Much as this does harm the card it is so good to start with it looks as if I have entirely neglected to account for that. Red is able to apply so much pressure that lines are forced such that you should be able to attack with Den reasonably effectively. Some times they will have to answer more threatening cards instead of Den, others they will simply have already tapped out and left themselves exposed out of necessity. Den effectively kills in 4 attacks which will rarely happen like that but it is still a fantastic measure for the cost of the activation. No other manland comes close in speed of kill (other than Lavaclaw Reaches, and only then with horrific mana investments) or beats it for mana investment for the goldfish kill. The most efficient on the latter are the cheap Treetop Village, Mishra's Factory and Mutavault, all of which offer one for one returns on mana to damage. These cheap manland are great for a bit of free damage here and there and some extra walker control but they are not great finishers. They take a long time to close a game. Den outpaces them all for damage per mana while leaving them in the dust for kill clock, all while also churning out bonus free dorks Ardenvale style! Low risk, high value, high efficiency and fantastic suitability. Really nothing bad to say about this one. 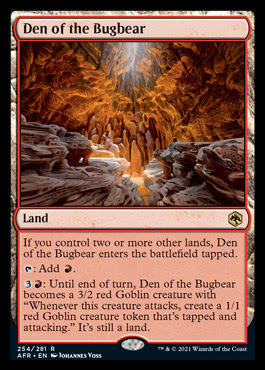 I love the design of the card as well as what it does (be a treasure or animate into a 3/3 for 2) but I don't think I can ride that bias into kidding myself this is cube worthy. It is just not very mana efficient nor is it really a modal card where both modes work well in concert. I will at least allow my bias to give this a 2 rather than a 1! 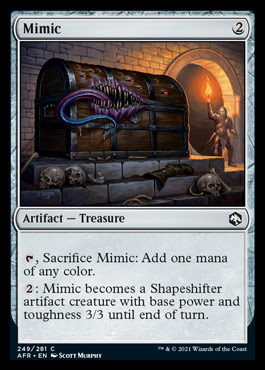 Interesting. I feel like in any other set this would be a phoenix. A 3/1 flier for 3 is OK, a little vulnerable and slow but pretty threatening. The on death trigger is good but I don't think it is as good as it looks. I feel like just drawing a card would be better. You only get value if you play one of the cards, that might force you into playing a Flameskull again which is hardly the worlds most impressive use of three mana. Flameskull isn't a persistent threat in a the conventional sense due to both forcing your hand on when you recur it and by easily tempting you with better/more important options than itself. It feels a lot more like a value dork, Cloudkin Seer sort of card. The extra power is nice but is not as good as drawing a card upfront. Mostly I think this isn't cube material as there are too many incidental exile effects that render this a bad Rishadan Airship... The relatively small upsides don't feel like they offset enough but I will certainly test this as cheap aggressive card neutral cards are generally what you want in cube. Icing is not a word than conjures up threat. Icing death sounds like some form of onset diabetes. Naming aside this appears to be a bigger Flameskull in white. Both Icingdeath and Frost Tongue are fine things to have in play. The equipment is surprisingly threatening and a big flier needs answering. Sadly I think the exile removal is a problem again all be it less of one than with Flameskull. It makes the card polar in performance which, on top of being a little narrow (only good in dork heavy decks) and a bit clunky and slow and frankly dull. Good white four drops either have a higher threat level, more immediate kick, or just a much higher power level. Sure, this is pretty powerful. It is even quite well suited to cube style games. It just seems like there are a reasonable wealth of superior alternatives, both in walkers and in dorks. 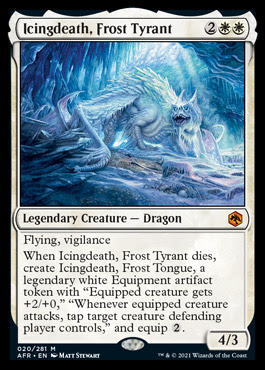 Offensively poor design here. Rolling dice is a pretty turds starting point and then it goes sharply downhill. There is no cohesion in the options while there is massive disparity in the power of the effects. If you must incorporate random stuff on cards you want to keep the cards function consistent and you want the swing to be minor. Critical fails and hits are not at all well suited to the kind of game magic is and they have been incorporated about as poorly as you could imagine on this card. If you roll a 1 with this you should lose hard while a 20 should do the opposite. At least the card is pretty bad so that I never have to consider playing it. Sadly there is almost certainly going to be a cube worthy card requiring a d20 roll. 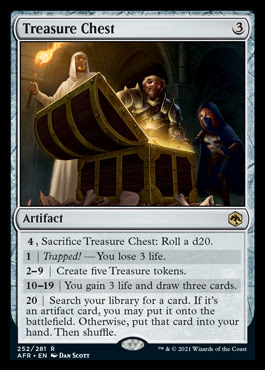 You See a Guard Approach 1

Cheap modal cards are great but tapping a dork is not enough of a thing to merit a card. Hexproof is but it is too narrow to include by itself. The impotence of the tap consequently fails to be the crutch this tool needed. I might play it in a very aggressive deck with high value dorks like a merfolk deck but in practice I can't imagine using what little space there is for non-fish cards on a card like this. 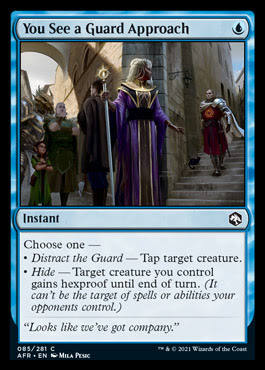 Cradle on a stick! A GGG stick with a single toughness sadly. This is a similar sort of card to Rofellos but worse. Harder to cast, riskier to scale up with, and slower to ramp while being just as fragile. It isn't even less restrictive as Rofellos as needing GGG means you are forced into a list pretty near mono green. Not that being worse than Rofellos is a bad thing, he is very strong, just polar. The reduced power of this solves the polar issue rather but not in a way that really helps the card look appealing for cube! Probably getting action in most elf builds at least. 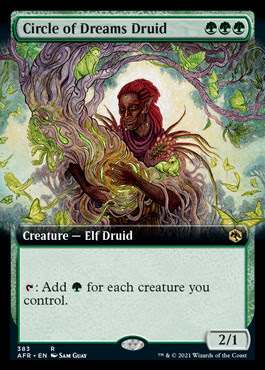 Manic Vandal with a fairly significant modal upgrade. You wouldn't play this without the Uktabi Orangutang function but unlike You See a Guard Approach the treasure Grey Ogre is enough of a crutch to support the more powerful narrow side. Ramping into a five drop is no bad thing in red. This is just a fairly playable little answer card. I would happily play this in most red decks that didn't have answers to artifacts. This helps with splashes as well and as with most Shatter effects should be even better in powered cubes. It is not a powerful card but it is absolutely the kind of card that will save your bacon over and over again. A big addition to the sparse dwarf tribe too. 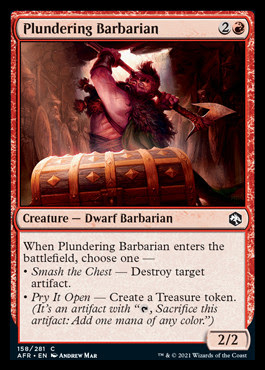 This has some potential. The bounce is fine. It is pretty universal interaction and trickery. Unlike many of the better cube bounce spells this lets you bounce your own stuff which is a win and good to see. The find a crossing mode is narrow but will help with all manner of things from closing out games, to ensuring face damage triggers, to killing planeswalkers. The things holding this back are no card advantage to be easily had and somewhat on the situational side. Sure, bounce is usually something you can cast but it is not as often something that is good to do. You Come to a River is versatile and covers a lot of ground. It entirely merits testing. I would guess that it won't quite make the cut but more for technical reasons like it being a luxury kind of card that is hard to fit in rather than actual performance. I can totally see this winning me a bunch of games in testing. 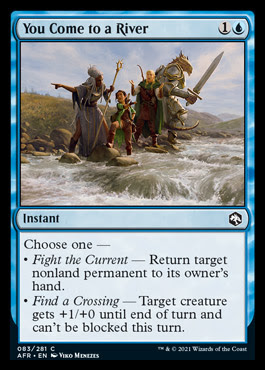