There is a lot of power here. Luckily it is trapped behind a paywall of seven mana. I am not Tinkering this out and so I suspect I am never using it. 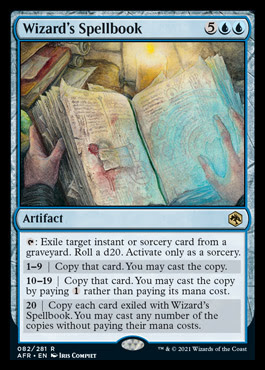 Much support is required for this but the power is not lacking. All told I think the difficulty in moulding the perfect support for Demilich in cube draft balances out the power neatly enough leaving this as a playable little card. It will rarely be free but will often cost two or three. At that point it is seeming quite good. If they answer it you will have it back at some point and if they don't you are getting some value in the short term. It is reasonably meaty for something that needs to attack and thanks to the other abilities it is not something you mind too much about trading in combat. One trigger and a trade per cast and a total of one cast from hand and one from bin is more than enough to make this impressive. You should be able to manage that reasonably well in your average Izzet tempo deck. If you build around it in some form of constructed deck then making it for free and expecting more than one recursion per game become more realistic considerations. One of the things I like about this is that I am happy enough to toss this away to a loot effect. It gets better with loots and it makes loots better and it all becomes a big happy circle jerk of synergy goodness. In a deck focused around casting this and the likes of Stormwing Entity it can become oppressively good. 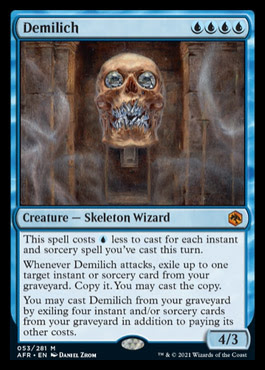 Low power and low use but Wily Goblin gets a fair amount of play and this is mostly better. Very much a synergy support card and almost exclusively played for the treasure, the 2nd ability is pretty poor on top of being narrow. 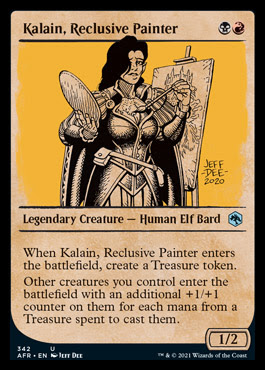 This is a funny little card that is a counterspell to a removal spell, be it spot or mass. Against spot removal it is a nice two for one as the 3/2 body will survive. Failing that it seems to be just a vanilla dork with flash. Not the worst floor but certainly not close to expected power level for cube. Overall this card is too conditional. You don't want to just hold it but equally you don't want to just cast it. 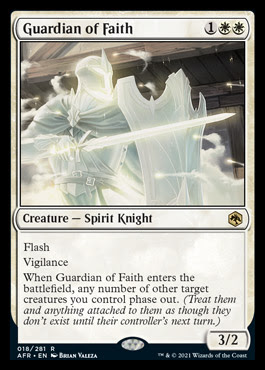 This is pretty cool but I can't see it being better than an Oblivion Ring. You just give away options and in this case it is to give up hope on their thing and take advantage of an extra mana. I would certainly rather not give away that option and so I wouldn't play this. 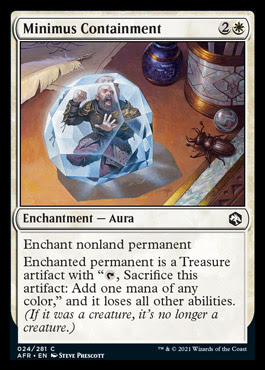 This is a good rate on costs to pump and will make quite a significant improvement to any dork you slop in on. The on death clause is neat too. It lets you cash in the Sword for a threat when you have run out or just when you need some evasion. Ward is cute and the equipment becoming the creature is great, it makes it far less susceptible to bounce and opens it up for some mild trickery. The utility and power to mana on this card is all good but the issue is it being a little narrow on top of a little bit fair. You only run this in aggressive decks and not all of them. I suspect I just want higher impact cards in deck slots where you can fit cards like this. Maul of the Skyclave wins games pretty directly, this takes a lot more work. 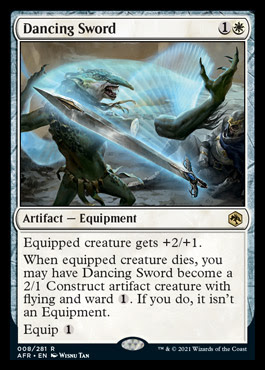 This is fine but there are enough better cards at doing this that it isn't likely to ever be a consideration for anything. 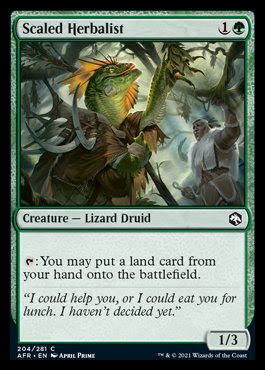 I hope never to have a deck with enough dice rolling for this to be good. This does scale very well with such things so it wouldn't take much. A total build around card with quite the aggressive lean, perhaps ruling out a lot of the potential synergy cards to go with it as a result. 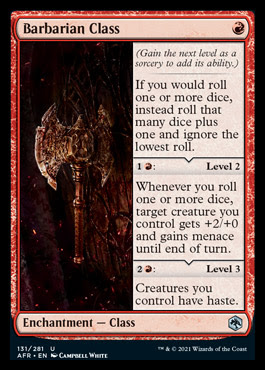 Not enough treasure stuff in cube to entertain a card like this however quite the mainstay for a treasure themed deck which are looking more and more viable. The kind of card that will one day be the centre piece to a combo engine. 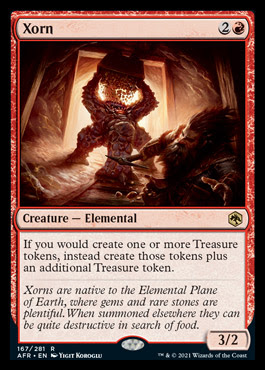 Powerful but really just a very over costed Curse of Opulence. You want mana early and finishing late. Gnawbone looks very cool for EDH but seems wildly overkill and unsuited to heads up play. 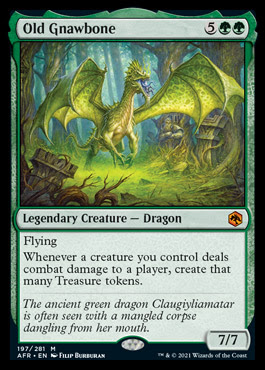 I am a big fan of these new style of level up saga in the Class cards. Obviously I had to dump on dice rolling in the Barbarian iteration but I am excited to play with these cards overall. This Warlock one is fascinating blend of stuff. A really minor Blood Artist to begin with which is great to have but not worth a card by itself. It will nibble away and be really tedious to the point that it will be game winning in long close games. I can see it easily doing five damage by turn 8 if made on turn one. Level two is a nice instant speed Ransack the Lab (Strategic Planning) which is great card quality and yard fuelling. These two things combine very nicely. The single mana cost of part one doesn't get in the way of the overall tempo of the card. Equally I think Ransack at instant speed would be pretty impressive in cube and see a good amount of action. It is a touch narrow but I feel like I would play Warlock Class with just the first two modes in a number of decks. But wait! There is more. For seven mana you can play double damage which is anything from do nothing to game ending. A nice threatening and impactful final mode to slap on an otherwise quite playable little tool. I like this more than it is powerful but that is no bad thing. Likeability is an important part of design. It is at least broadly playable what with Ransack being a big part of the card and it being such all all round spell. In practice this card is likey a good black Omen of the Sea. 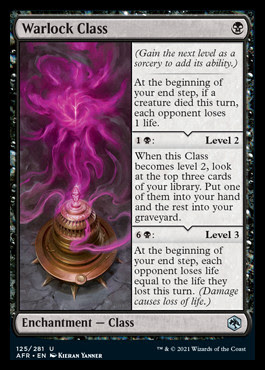 This is sadly a build around only card as it does far too little without other effects frequently causing you to gain life. This is sad because Class cards are ace and this is ace. I want to gain more life and put counters on things. I really enjoy the various iterations of Soul Sister decks and would play this in a bunch of them. It isn't the most mana efficient but it is quite robust and does seem to help your game plan on all fronts. It would be more self contained and thus playable in a draft setting if it were an Ajani's Welcome on level one and then put a token creature into play every turn at level three but then it would also be less interesting. Level two does give you another Spike Feeder infinite combo. Level three can get Feeder back from the bin too for that all in one combo card! 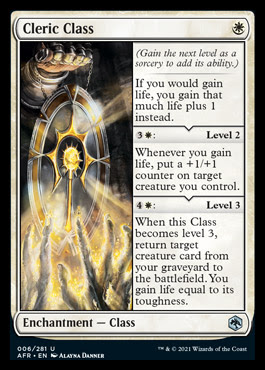