Powerful value and token generator that ends a game pretty quick or provides a tonne of fuel to empower other things. Sadly this is gold, top heavy, and slow acting. I want tokens earlier than this. I also want my late game reach cards not to get locked out by a couple of 1/3 or bigger blockers. This has less threat than Assemble the Legion and that is too slow for cube. This needed to compete with Paradox Zone and it really doesn't come close. If I can apply the skeleton buff part of the card to some other things I am running this grows in value but it is not a common type, especially in cube. This has the power but it lacks the suitability. 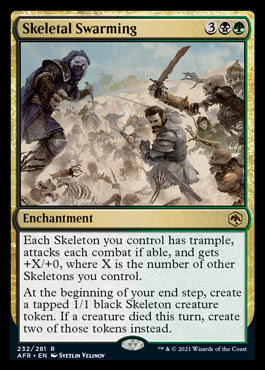 Much like the other colour hoser removal spells from colours already with access to removal this one just lacks the bite to appeal. 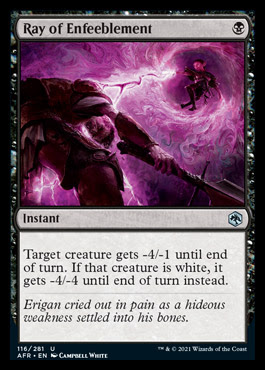 Monk of the Open Hand 6

This is very interesting. Clarion Spirit did well in cube but a 1/1 flier is a lot more return than a +1/+1 counter on a 1/1. This isn't a case of how many triggers make it good but also a case of when that happens. If you only get 1 trigger but it is on turn two then the card is good. If you get two triggers within a couple of turns of making this early on then again the card is good. If it is all happening late then I am rather less impressed. The issue is sustaining the double spells. White is not good at card advantage and so I can see this being a late game limp draw that fails to threaten ever getting bigger, or at least big enough to be relevant at that point in the game. A vanilla 3/3 isn't really getting it done late. A Stromkirk Noble is a bad lategame top deck but it is at least threatening. It can continue to grow without support and benefits a lot from some mild evasion. Monk of the Open hand can really hamper a curve too, you might chose to play inefficiently with your development just so as to make the Monk do something. Playing Tithe and Thraben Inspector just to buff the Monk instead of Precinct Captain or Adanto Vanguard on turn two is almost certainly wrong. Monk is narrow being an aggro card but it extra narrow wanting ideally both a very low curve and a high degree of card draw. There is a lot of potential in this card and I can see it doing a lot in contstructed settings. In the limited ones however I think this asks a little much and offers not quite enough back. Close enough to be worth testing. Mostly it is a 2/2 and that is great. If it is a 3/3 or bigger decently more than it is a 1/1 then it should make the cut. 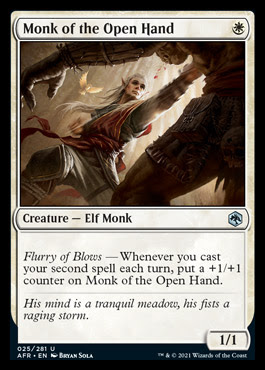 I like the design here a lot but with half the activated abilities relating to a specific other card this is going to have a hard time getting on in cube. This in practice is a dormant threat. It sits there stalling a bit and then becomes a 7/7 beast of a flying dragon. That is pretty much all you can expect from this. Far too little in the way of options to really cut it as a planeswalker while being too slow and unreliable as a threat. Even with Monk of the Opening Hand in your deck the Grand Master of Flowers lacks options and punch. Gideon of the Trials is a better protector, a cheaper development, and immediately relevant as a threat. 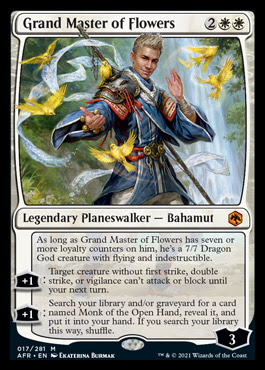 Now this is a trick with a whole pile of potential. It is cheap and does a lot more than most. This offers stats changes rather than a stats buff which means Wild Shape is best with smaller dorks. Sometimes you can get +3 power but only if you started with 0 power etc. Luckily the cube is mostly cheaper cards and so Wild Shape mostly offers a good array of stats boosts. Turtle mode is basically just hexproof and will help save key dorks from removal. Spider mode does a few things, sometimes it is gaining up to five toughness, sometimes it is chumping a big flier and sometimes it is sniping down a small flier. Perhaps it is a massive mana boost with a Devoted Druid! Elephant mode is the damage side that will allow for some trample damage to kill walkers or a stats boost to take out a dork in combat. The competition for this is Snakeskin Veil which is better protection but less versatile over all. Where Wild Shape starts to get really naughty is with dorks where the majority of their stats are found in counter form. Wild Shape my Hangarback Walker into a 7/7 trampler sounds very nice!  You cannot have too many cards like this in a deck or cube and so it needs to be better than alternatives rather than just good enough but it does look promising. 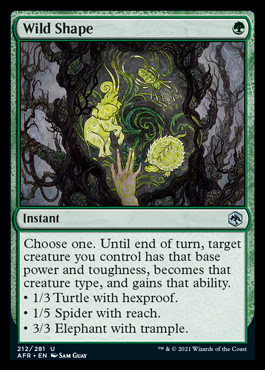 I am impressed at how much D&D lore has seeped into my world without my knowledge. There are a number of names and places that I am somehow familiar with such as Mordenkainen despite never having played D&D before. As for the card I am unimpressed. Will Kenrith is a superior top end blue planeswalker if you are intent on such things but really a sorcery speed six drop is not how blue plays best, not unless we are talking about Upheavals, Time Spirals, and Minds Desire in the powered and combo cubes at least. Mordenkainen has a very potent +2 which is powerful card quality and puts you up a card. Putting stuff on the bottom is nice but usually that is because it is expensive stuff you want to retain access to but not until later. Once you have a six drop out later is now and there shouldn't really be cards for later any more. As such the bottom perk is lost and draw two discard one might be better. Generally card advantage modes on six drops are less interesting than when found on cheaper cards. You are really looking to close the game at that point. Card draw is there to help you find those game ending cards along with the mana to play them and the tools to survive to that point. Flopping out Mord and going +2 is no defence or tempo or even that much threat. The -2 addresses these concerns but not well. It leaves Mord on 3 loyalty with only one vanilla token defending. It might be an 8/8 token but it could easily be a 2/2. It might die to some random Mind Rot. You might not even be able to make a dog if Mord is the last card in hand. This is really poor protection as well as poor consistency. Even the emblem is poo but it doesn't matter as the rest of the card is a prerequisite to it and it beats it to the punch on being poo. Mord obviously has a good ceiling being a source of card advantage, having high loyalty, and the capacity to churn out a couple of back to back 10/10s. Sounds a bit like Karn, Scion of Urza but neither 4 mana nor colourless... 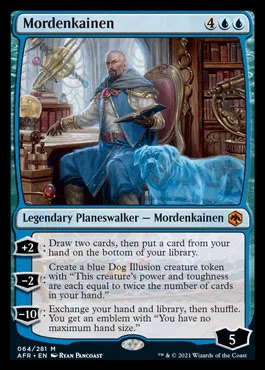 This really hurts. Two life adds up fast. I like how Eye firmly sets the rate of card draw at 2 mana and 2 life. A couple of decks can play this. Those that stand to gain a lot of life and those that stand to win pretty quickly and powerfully. I can imagine this being great in artifact heavy combo decks and equally great in white lifegain themed decks. Cards like Endless Atlas and Mazemind Tome are also great but they are slower than Eye of Vecna among other shortcomings. The power is sufficient that I will test this in my cube but it is likely going to be too polar. It will body some of the control decks while being a shocker against the more aggressive lists. This card remains very direct, cheap, and clean while also being pretty universally desirable of an effect and cannot be overlooked as a result. This will see a lot of play in a lot of places. It will not seem broken all that often within the context of a deck (rather than against specific decks) but it will be a top rate support card. This is exactly the sort of card that makes The Book of Vile Deeds start to look like it might have a chance of both seeing play and summoning Vecna. 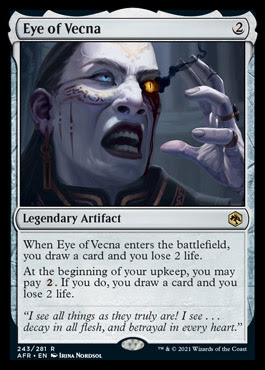 Sadly this is the kind of card to dash the hopes of any would be Book operators looking to summon the big V. It is not so much that Hand of Vecna is bad, more that it is not a good pairing with the others. You don't want a big clunky equipment in many places. Especially one that needs you to reliably have a big hand (in an aggressive deck none the less) and likely wants dorks that scale with stats given that is all the Hand offers. There are a couple of potential places I might play this new equipment iteration of Empyrial Armour but probably never will unless I can somehow justify the rest of the set as well which seems quite a push. 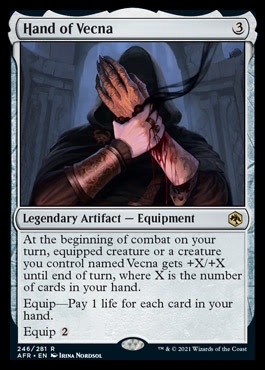