Cave of the Frost Dwagon 8

This is a touch weaker than Colonnade but then Colonnade is one of, if not, the best manlands ever printed. This loses a power and vigilance on Colonnade, the latter of which can effectively mean this costs an extra mana to use aggressively. This also has perks over Colonnade in that it is less narrow being in just the one colour and in that it can come into play untapped. Overall this is a very solid card I imagine I will play in basically every white deck I can. It occupies a lovely middle ground of usefulness. It doesn't kill as quick as the red or blue options from the cycle nor does it offer the utility of the black one but it is well costed and will do reasonable work in aggro decks all the way to control decks, both on offence and defence while being suitably robust. 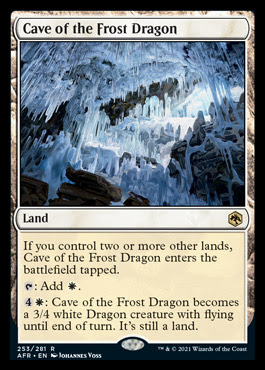 The Blackstaff of Waterdeep 3

Great little tool for the Ensoul Artifact decks as well as having some other uses. The power on this one is fairly low but it makes up for that a bit by being itself a cheap artifact and thus doing good work empowering the other kinds of thing you might expect to find in Ensoul Artifact builds. This helps reduce the cost of a Thoughtcast while Ensoul does not etc. This is a lot better in singleton that it would have been thanks to the recent MH2 printing of the indestructible artifact lands. Doing cute stuff with dorks like Walking Ballista and vehicles like Colossal Plow sounds quite fun too! Far too narrow for most cubes and really a bit of a build around, if not directly. Fun, useful, and reasonably powerful card. 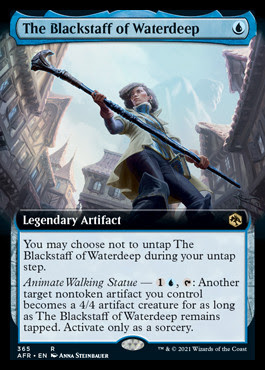 I want to like this but it is just bad presently. The only ways to really get treasure early come at quite the cost. At that point you might as well be running Unmask. Without treasure this is rubbish but even with it the card is still a discard card and rapidly loses value as the game goes on. Just play a decent two drop discard spell like Agonizing Remorse before being tempted by this. 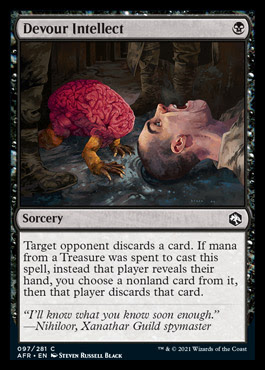 I want to like this as it is great utility in white. There is an increased number of enchantments in cubes these days but the average cube still has twice the number of artifacts compared to enchantments while mine is around a third more. Utility is nice but power is also important. If you are not destroying an enchantment worth destroying this card is dangerously low powered. I am not sure I could bring myself to running this in any deck blind. With a higher enchant count this gets better pretty fast. I'll give this a quick test to start with under the assumption it will not last however I will keep it in mind for the day enchants outnumber artifacts in my cube. It may surprise me. Callous Bloodmage has been outstanding and his exile mode has been an unexpectedly high percentage of the reason why. 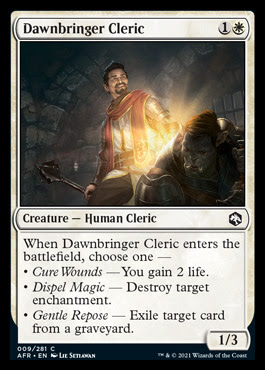 You Hear Something on Watch 1

Barely playable due to being fairly low power, situational, and having poor overlap in the value of the modes. 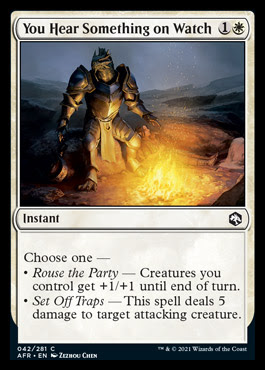 This is very much a Hostage Taker kind of card. But rather worse. Two extra power and one less colour is nice but just give me a nice safe Ravenous Chupacabra over this all day long. I really don't want to have to pay a whole bunch of mana to get rid of your dork properly when I am not getting it into play myself as reward. This is one of those cards that is quite powerful but performs a role where by it is simply outclassed by too many alternatives. Power wise this deserves higher but playability kicks it down to 2 at best. At least it clears the now embarrassingly low bar of Faceless Butcher! 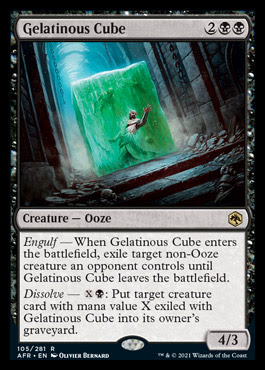 You See a Pair of Goblins 6

This is fairly low power but has some good potential due to the good overlap between the good modes. Trumpet Blast (charge them) is situationally very powerful in an aggressive red deck, especially any that are trying to go wide. It can be that one turn Torbran effect that does critical damage. Befriend them however is always playable and affords some nice scaling with things like Purphoros and Goblin Bombardment. Instant is cute for prowess and general trickery. I suspect this is one of those cards that will over perform in cube. Even so it could still fall short simply due to the pretty extreme power level of red three drops. I cannot see myself playing this over something like a Rabblemaster. Suitability is seemingly becoming a thing of past magic, increasingly it is just about raw power. 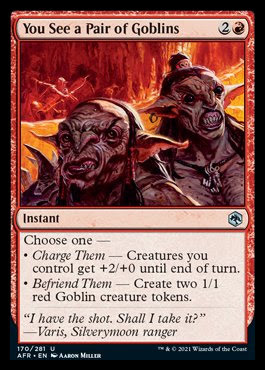 A little bit costly for a combat trick, even if a powerful one. Killing a flier is always a lovely addition to a modal green card but it remains a requirement that the other bits of the card would be playable without it and this does not meet that bar. 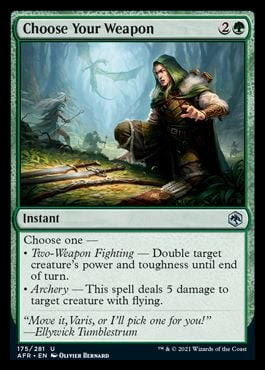 Cunning Evasion on a capped Edric. Very potent. This offers a lot of value and threat in combat. If you have overlap on (non-token) dorks you can attack, draw a card, or at least a removal spell, and not risk the death of any of those dorks. Graz works really well with any sort of cheap dork with relevant EtB effects as well as evasive dorks for the card draw. An Ophiomancer is a nightmare with this, either they block the snake and live under an Abyss or let you draw a free card every turn. All this utility and value on top of just being a 3/2 for 3 in blue. Blue not being overdone with cheap dorks and Graz being double blue is a little bit of a concern for his chances but I think power level will keep this dude in cube and likely result in some good supporting cards joining him. 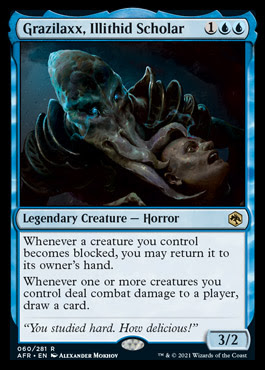 Cool card in flavour and design. Sadly it is all a bit too much mana for the actually useful modes. Climb over just isn't doing anything most of the time. If venture is good but needs more support this has a small chance but I wouldn't hold my breath. 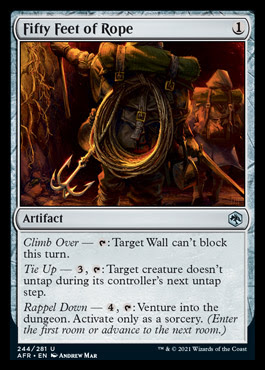 Nice little mana rock for specifically tribal dragons. Super narrow and not even a very strong archetype but at least a lock in for it. Quite the super Signet. 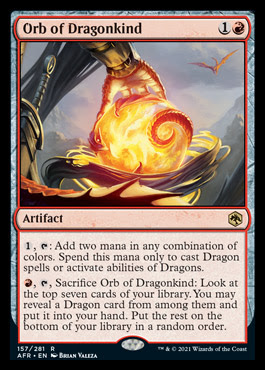 I think this will be a perfect fit for the way green is going in cube and really help power up the colour. Green has lacked decent tempo two drop cards other than Scavenging Ooze for a long old time now. Pure beaters like Goyf are not well suited to cube and that mostly left green messing around with Elvish Visionary style cards and ramp cards which rather limited the directions you can then go on to build in. This is a high tempo threat with value and even some reach. It is half way to the pack tactics trigger by itself and only one power off if using the buff ability. Being so cheap it is hard to imagine this not drawing over a card on average. Even half a card would be very impressive for a mono coloured Watchwolf with multiple upsides. The transform mode is great too and not just for assisting the pack tactics. It makes blocking this a real pain and likely reduces the value of planeswalkers that protect themselves with blockers rather significantly. You cannot easily hold this at bay with chumps and there are not that many dorks that block this as a 5/3 and live to tell the tale. The ability will do most of its work simply by existing and not needing much activation. Simply having four mana up will force people to respect it. A deck containing cards like this, Old-Growth Troll and Esika's Chariot sounds terrifying. Green is rising to the top of the pile again in cube and this is exactly what it has been looking for. 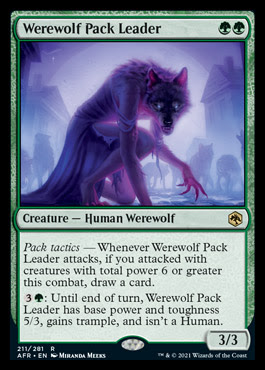 The Book of Vile Darkness 2?

Cool as this is I cannot imagine it cutting it in draft cube. Certainly it doesn't get there with the first ability alone. Sure, losing two life is easy but it is not quite so easy when drafting and a BBB cost on top of that keeps this horrifically narrow and not even that powerful. The other two things/cards you need to sacrifice for the third ability would need to both be rather better than this to give the whole set any chance at all. Even then it is likely quite the meme card. Trying to draft and assemble such a specific three card combo in cube draft is a fools errand. Might be a fun comedy deck to do in a constructed setting at some point though. 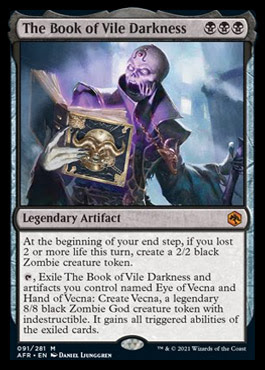