A fairly average power level planeswalker with the happy fortune of being broadly quite well suited. Tossing out devils is nice and can scale very well with a number of red tools. Tibalt (3) is just about hanging on in the cube for doing that just a couple of times although will likely not last alongside Zariel. The threat of giving haste and a little pump to a bunch of cards is quite scary. It isn't great but it has to be respected. It isn't that great on the turn you make Zariel as your mana is tied up but there after it is a free and universal giver of haste which can allow for some very big swings. It is also fine not using it and just hitting that devil button every turn. Zariel's ultimate is surprisingly tame, it gives a nice advantage sure but it isn't a probable and quick win like most. I mean, it is with a Glorybringer... I think this is probably most comparable to Elspeth Knight-Errant. While she used to be a very heavy hitter and big name in cube she has rather fallen out of favour in my cube for reasons I am still to fully comprehend. Zariel, very playable, very average, very red. 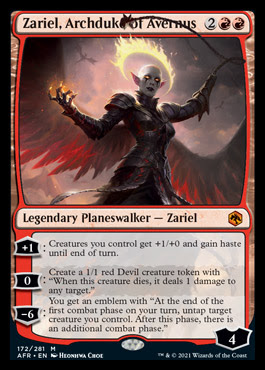 Just a fancy bear. Gold, conditional, bleh. This has lots of bells and whistles but they do not do much to impress or excite. Fitting in the word trample somewhere would do a lot to improve this card. 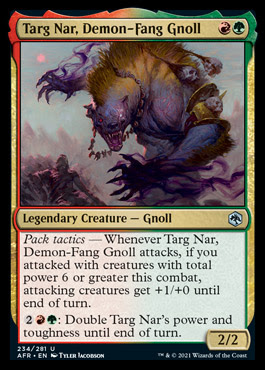 This looks good but isn't at all. I wouldn't pay 2 for a spell with all the effects of the trigger if you added draw a card to it. That fails to bode well. There are better ways of getting unblockable and far far better two drops. In cube this will perform very comparably to Lumengrid Warden. Better sure, but a very long way from enough better. Some mild tribal hope where being cheap and not plain vanilla might be enough to cut it. 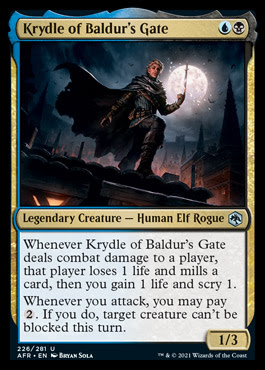 This is interesting but mostly as a build around sort of thing and even then not exactly powerful, just one of the better ways to get venturing done in any reasonable quantity. I feel like this probably has to be part of any blue single deck built around the venture mechanic. Either you slap it on very safe hard dorks or you find other ways of protecting stuff and slap in on something that really merits having evasion. It is starting to seem like there are so few good venture cards that none of the support ones will get in which in turn will really curtail the power of the few venture cards with potential to the point we might very well end up with none lasting in cube at all. 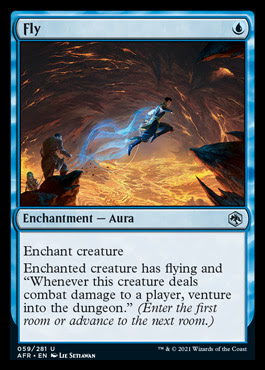 Narrow doesn't really come close with this but in mono green vs some blue decks this is the best removal tool by a good margin. Might well get a bit of sideboard love as a result. 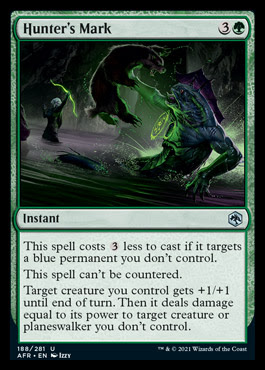 A Weirding Wood but narrower and likely less powerful. Downgrade to a card we didn't ever use and yet still somehow not able to get a 0. 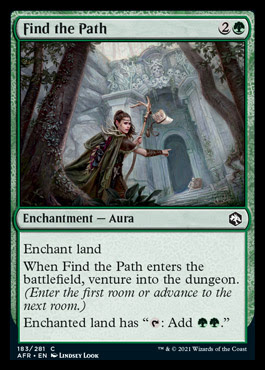 Obviously a big fan of this dude but I doubt it makes the cut for cube. It is very slow and clunky and not doing much for your threat or board presence. Aristocrat decks are unlikely to be this desperate for a sac outlet. Lots of utility and options but too lacking in the power and tempo department. 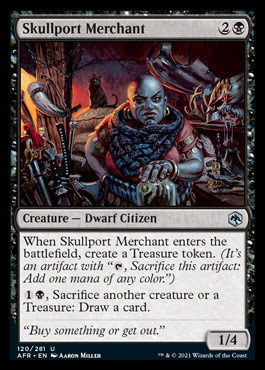 Despite this looking like one of the better removal spells in blue against specifically red dorks I am not sure I would ever play this. I think I would need aura synergy somehow while also not being white (where far far better options exist). 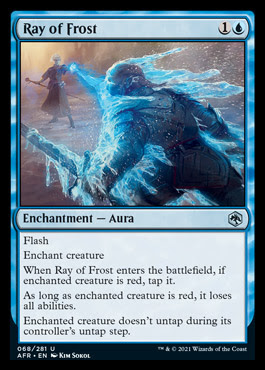 Aegis of the Gods that loses the enchantment type and gains a benign ability. White has more of these self hexproof giving cards now than it really needs. This is certainly playable but it is narrow, really a sideboard kind of thing. And it certainly isn't exciting. 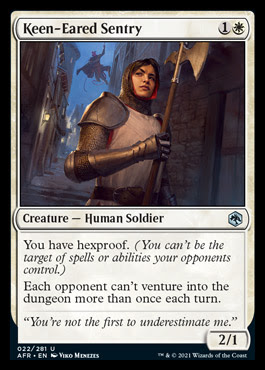 This is a lot less potent than Exclude but it is also less narrow and still a counterspell that helps pull you ahead in some metrics. I am a big fan of counters that hit both walkers and dorks as they are the two main types of threat you face in cube. A card like this helps you feel safe. It is also nicely splashable. I don't think this gets there but I am willing to give it a chance. We will need some venture cards to test with and I have not found that many others thus far... 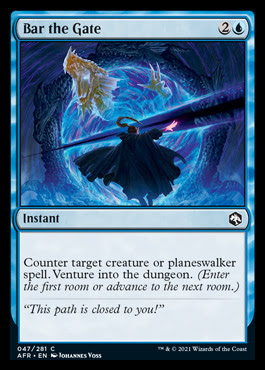 Redundancy for an effect not used in most cubes although gaining some attention thanks to the exceedingly potent evoke dorks from MH2. I might play this in a deck built around such things. Too situational and narrow for cube draft. Not exactly high power stuff here either. 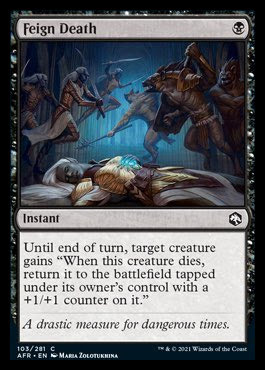 I do like this both flavour and effect. Trading away instant speed on Naturalize is worth the extra mode in this case. What I doubt is whether this appeals more than something like Vivien Reid or Acidic Slime. As soon as you move away from draft cube and towards more constructed decks this gets less appealing with the likely irrelevant exception of a dungeon deck! The 3rd mode is not powerful but it is always useful and keeps this card from being dead. That makes it better in limited settings. In the constructed ones you are just going to play more powerful and suitable effects that you actively want and won't need that dead card protection. 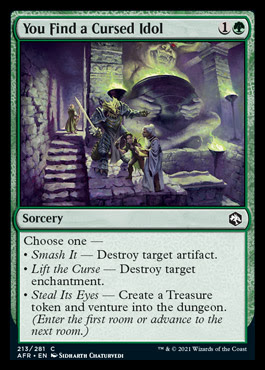 Along with Fly this is one of the cheapest ways to get repeat venture triggers. On paper this seems comparable to Glint-Sleeve Siphoner. With more venture support it should easily outclass Siphoner, without it will be a more tight run thing. That should probably be enough to make this cube worthy. An unblockable two damage is no bad thing either, annoying for some walkers, and ultimately a threat. I would likely play this in an Izzet tempo deck with it being a cheap effective threat with reasonable returns. What this has over Fly is being a fine stand alone card and not risking getting two for one'd and that stands to give this a chance at being a stand alone cube card. 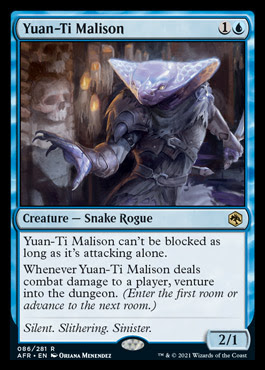 You're Ambushed on a Road 1

The return to hand is too narrow and low tempo, the combat trick is too underwhelming. Overall dead too often and yet still unimpressive when not. At +2/+2 this would look a lot better and likely be just not good enough as opposed to clearly not good enough. 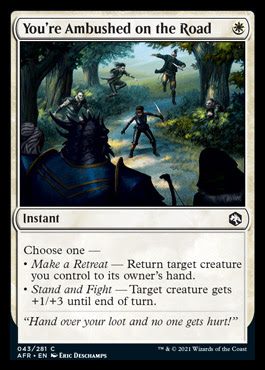