A little bit slow and vulnerable as far as a card draw tool goes. The body is decent defensively and the treasure perk is excellent. Power wise Prosper gets there but being gold and being outclassed as a card advantage tool by numerous safer and/or cheaper enchantments rather kills this dudes chances. You just don't want your pricy card advantage engines bolted onto dorks most of the time unless that advantage is EtB somehow rather than ongoing. That means that despite this card having extra functionality and uses as a body, overall it is a drawback. You are not playing this for a deathtouch dork. It would be fine in cubes but you can do better. Where it might not be so easily surpassed is when you can pair it with other play cards from exile effects. Then the ongoing treasure supply will be exceptionally nuts. A bit like having both sides of Birgi out at once! Indeed the Horn is one of the better things to abuse this with. 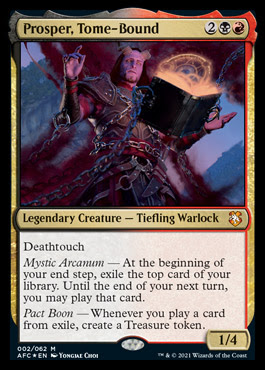 Sefris of the Hidden Ways 3

A bit too needy for general use in addition to being just a 2/3 by itself. This is only needy for having dorks going to the bin and for being three colours. The power is likely enough that you don't require other venture cards to supplement although that obviously helps. Sefris seems best with self mill and discard effects allowing you to quickly and cheaply gain dungeon triggers. You want lots of small repeatable effects rather than big ones so as to get the most venture. Ideally instant so that you can get a trigger in your opponents turn as well. Self mill (likely supplemented with discard) also lets you put extra large dorks in the bin and cheat on lots of mana when completing dungeons and recurring your dorks. Sefris isn't quite exciting enough just to play and get value from things dying. Not when you can play the likes of Midnight Reaper. 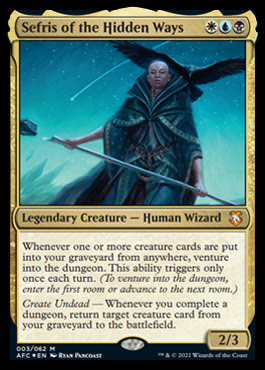 A powerful enrage trigger but on a top end card with all sorts of vulnerabilities. You need to be enraging this dork else he is awful. You are likely not packing many dice rolling cards either... I can see playing this in an enrage deck but beyond that it feels as if the threat of Doom Blades hangs to heavy over this dork. 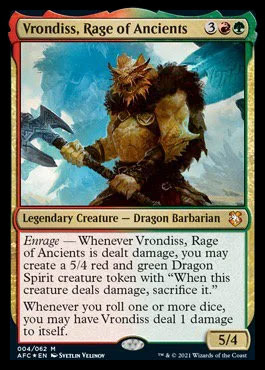 The effect here screams to be played in both pebbles and boggles decks but the four mana 4/4 body rather gets in the way of that. This is exactly the sort of thing I want in play when I have a Puresteel Paladin or Kor Spiritdancer in play but it is a bit win more and a bit slow for those kinds of aggressive synergy decks. I imagine a more midrange build of such things is possible but it likely isn't great for the formats you can actually build them in. Without a really heavy aura and/or equips in your deck Galea isn't worth playing either so it is ruled out of most normal builds. 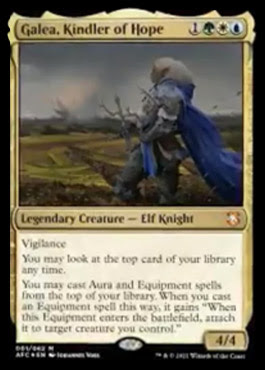 Shockingly poor floor with a big ceiling. Stick this on a Walking Ballista and roll well and that could be enough to take down the game in one swing. Too much synergy needed to make this good and once you have that synergy this then isn't good enough. 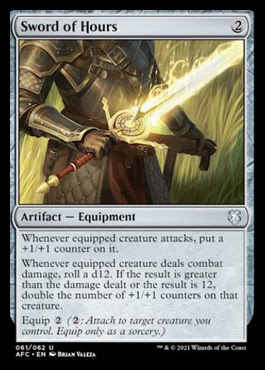 What an odd card. This is very situational. Yes, you can scale it well but that is a lot of effort and is just walking into a two for one. Just play a card that buffs or a some kind of Quicken, Scout's Warning, or even an Alchemist's Refuge should flash be that important to you. Rolling a buff into the flash effect just makes it harder to pull off usefully. 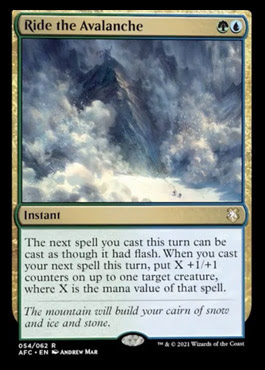 A lot of words for what is a bit of a Bear. More of a Knight I guess thanks for colour intense cost and first strike! The power isn't all that exciting here without synergies and the issue there is that equipment synergies are Boros not Selesnya. This is a narrow and unenticing card in the wrong colours. Reasonably powerful when it all lines up but still nothing jaw dropping. Not a card I expect to play. 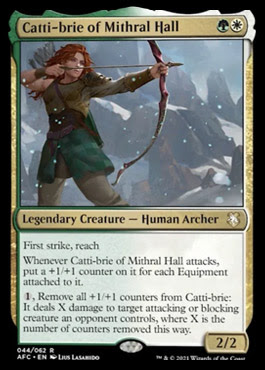 This can get a whole lot of life. Get back two big cards and you can lock in 15+ life. Restricting this to permanent cards limits the appeal and big recursion tools are very easy to come by in green without having much call to action. Life, even a lot of it, isn't the pull we were after when it costs functionality. 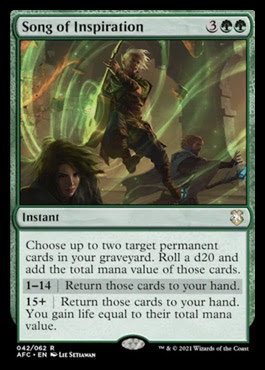 This is cool design and likely in the right sort of set. Best with 0/0 dorks with counters, well no, best with things that cheat equip costs. Really this isn't all that playable outside of the Colossus Hammer style of combo deck. Even then I am not sure they are splashing for just this, green needs to offer more than this to temp the archetype in. 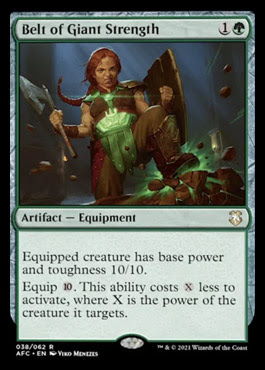 This turns most things into a hard to handle issue. While a powerful card it isn't doing much by itself. I think enough cube decks would want this for it to be worthy if it were not for being restricted to blue decks. Blue likely wants this least of all the colours. Being restricted to it tips this into the overly narrow camp. 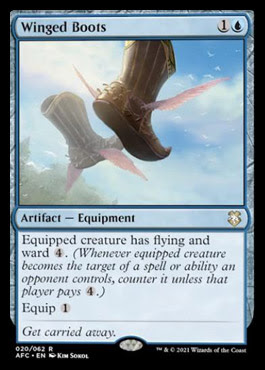 By itself we have a scry 2.5 then draw 0.25 of a card each upkeep. Not even close to good enough for four mana. This is also horrifically random. It gets a bit better with more dice cards but then you are playing more dice cards and your deck is bad. 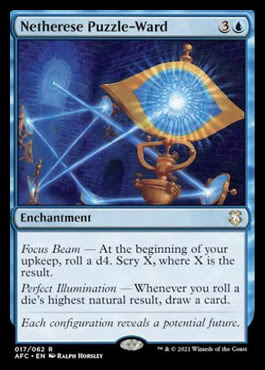 Much like big green recursion there are many more appealing draw X spells of which very few get action. 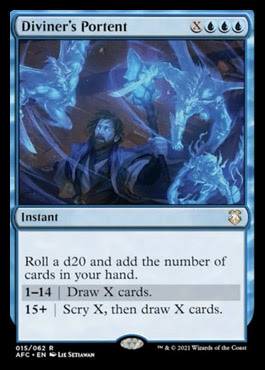 These are some of the most egregious dice rolling card designs. The ceiling is amazing and the floor is shocking. Yes, the random is reduced by having two dice and an element of control however the outcomes remain unacceptably wild. You can double high roll and fail to kill the things you need or you can double low roll and just have a really over cost Wrath. A bad Wrath where the floor isn't even a Wrath? Eeek. Never play this. We could chat about how the average of this kills all dorks with 3 or more power and makes 4 knights but that is pretty meaningless. Either it does what you need and you probably win or it doesn't and you don't. You probably have a good 75% chance or so of hitting what you need to but then have some self respect. Believe you can win without needing to roll well. Even in commander I suspect these will get old very quickly. One dick at the table will love them and everyone else will groan whenever they are played. Eventually these cards will become as uncouth as flopping out a Winter Orb or curling out a literal shit on the game table. 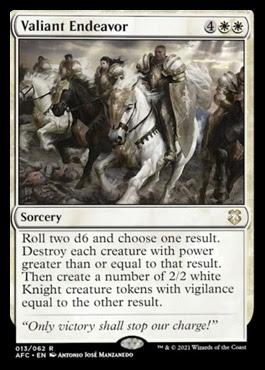