Robe of the Stars 0

In principle I like this but in practice it isn't the kind of thing you want. This does nothing by itself and is very defensive. Few decks look for that mix and fewer still can afford the space. There are so many more useful or appropriate means of dork protection that don't sink a load of your resources for a potential of zero gains. 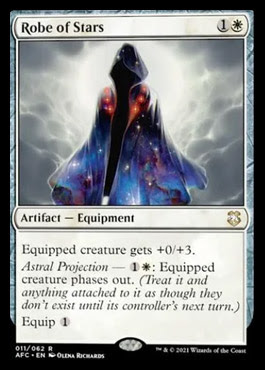 Mantle of the Ancients 2

This is a powerful build around card. It is too clunky and reactive to play even in a normal aura deck. What you can do with this is play a load of looting effects to power through you deck and find some kind of cheap hexproof dork to play while filling up the bin with some well placed auras then one shot the opponent with a Mantle of the Ancients. A bit too much of a fiddle to be all that powerful and rather putting all your eggs in one basket as far as strategy goes. 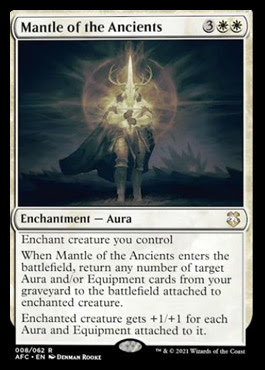 Nope. Don't play this. It is quite bad to begin with and then has a big of helping of narrow to go with that. Just imagine the deck that could make good use of this and how slow and bad such a deck must be. 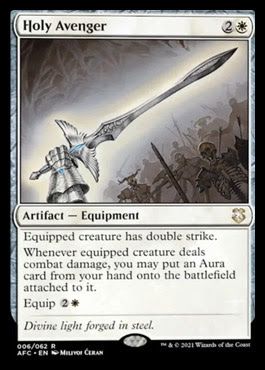 This is a useful ability and one that white quite wants. Mila offered it but on a fairly puny 2/3. This is a 4/4 but then it also costs four rather putting it out of the utility area and into that which requires a bit more threat. The attack perk is nice but somewhat minor in addition to pretty situational. It is again, quite comparable to Mila. Much as I like this card and want to draw cards when my threats are targetted in white I don't see this quite being the card to do that for me. 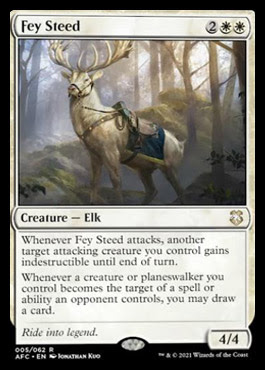 Very gold and very costly for what isn't really all that much threat. This kind of cost needs a near perfect threat and that is a long way off what this is. Insufficient reach, mediocre tempo, and no value to speak of at all. 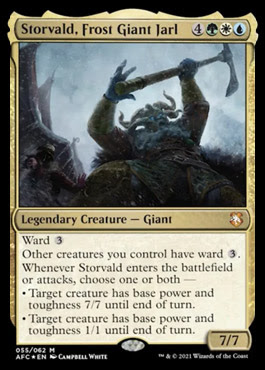 Broad spot removal on a land. Sadly a dice rolling land. At least this will always leave things a couple of draws away and will sometimes be very deep indeed. This is useable although the self exile clause stops it from being actually good in some kind of land synergy build. Without it you could really control a game. For general use this is a little costly to use and will not see much play. Certainly too narrow for drafting cubes. While it is playable it is not very high up the list of colourless lands you actively want in any given deck. Further to that it is the kind of card that doesn't get activated much. I suspect things like Mishra's Factory and Rishadan Port getting used for the abilities well over ten times more than this. 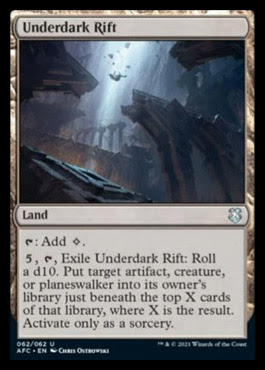 This is a powerful mana rock. It costs the right amount to deploy and has a lot of utility down the line in closing out the game or even just controlling planeswalkers. I will try and avoid having it in the cube as it is filthy design. The effect is just so wildly polar. Even making it range from a 2/2 to a 4/4 would be a massive improvement on the card and it would still be a polar feel bad card. I'll very much try and stick to Mind Stone over this where possible. Activating this at any point in the game before a low resource top deck game is pretty much living or dying by the dice. Try and take out a walker and fail to roll high enough is likely a loss and that just isn't how I want to play my Magic. 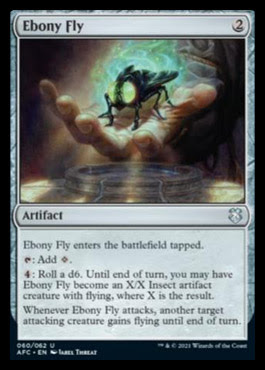 Another interesting card ruined by random dice rolling rubbish. Some random would have again been OK but the range is just foolish. 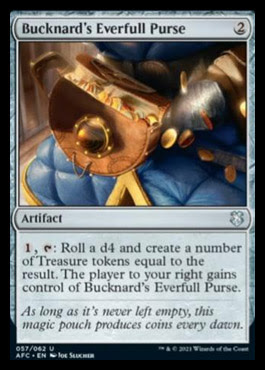 This is rather like Hostage Taker. It gains a lot of safety thanks to the instant speed and the inability for opponents to regain their dork with removal. The cost for that is no longer hitting artifacts and not getting a free 2/3 as well. I am fine with all of that. Artifacts are not the main target for Hostage Taker and a 2/3 is pretty minor when compared to the power of an effective Control Magic (plus any Etb/cast triggers). This is an answer, value, and a threat. It isn't great tempo but it is fine tempo. This is premium removal. A kind of fair Fractured Identity. 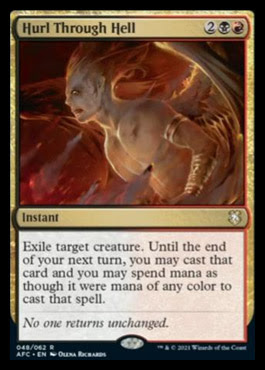 This is very expensive in all ways and is significantly underpowered in 1v1. Far too random in results too for this kind of investment. 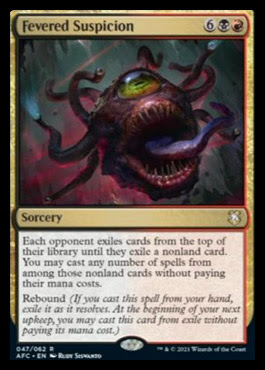 This would be a fantastic little support artifact if it were not for the exile aspect. You are not triggering a load of your "when this dies" effects with this and so you are not generating extra value easily. Even so, this is a source of value ultimately thanks to the d10 ability and the very likely predominant saccing of tokens. That probably makes it close to playable. The d10 is random but the floor is fine and the average result is well above what you need for it to be as good as endless value, or at least well outstripping what is actually available to get back. I think performance on this will be fine but it will be too much of a tempo loss and too much of a luxury to make enough decks to be worth including. 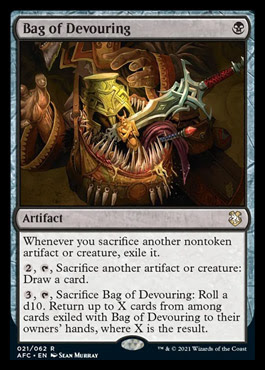 Just too needy to perform well and too costly for those risks to be worth taking. 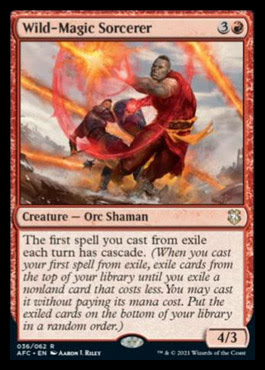 This is so symmetrical I cannot quite tell if it is good or not! It is capped at one spell a turn and in a 1v1 game it will always be 2 extra cards in each players hand effectively. So, the symmetry is broken in a couple of ways here. The best way is by having a cheap deck that empties it's hand fast thus ensuring you have more use for the extra cards. There are some mild mill uses for this in cube just playing your opponents stuff and depleting their resources. Not quick or exciting but absolutely a thing that would happen if you played with this. I wonder how the dynamic works when there are 2 lands on offer with the Spoils, do you lay one and risk exiling something good for your opponent to play with their hit on it? Ultimately this is a very quirky and wordy take on a Howling Mine you get first dibbs on the bonus card in 1v1. I am really unsure still about this. It seems like it is just not worth it most of the time but it could be pretty broken in the right place or with the right abuses. 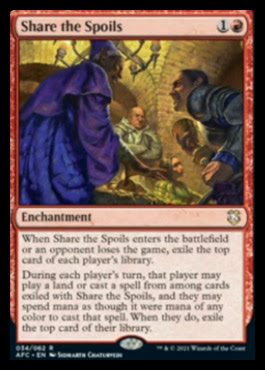 I really really still hate this design. This card is too costly for normal cube play but in decks that can cheat big things out this gets a bit scary. This can easily generate mana, it can even do it while Wrathing. The effect is a bit too potent to ignore even if the card is horrific looking. 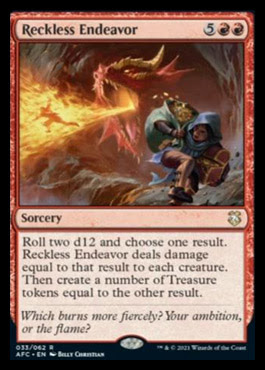 Powerful equipment but narrow and clunky. You are just not playing this in a cube over a Sword of What and Ever in your deck and thus absolutely your cube. Quite possibly too clunky even for a deck built around abusing this effect. 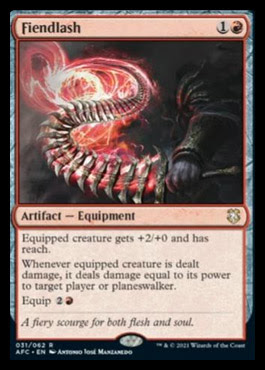 Too pricy for normal use and too fiddly to abuse for cheating out. Very powerful effect on this however. 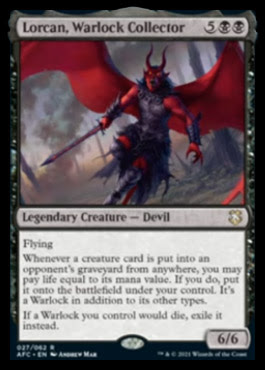 A mass Reciprocate type of card. This should crush any sort of race but as a Wrath or protection spell I think it is a little lacking and as such the end product is likely too situational. Being forced into eating a load of face damage to kill dorks is lame, it is why delayed Wraths are lame. It also doesn't help protect planeswalkers. The potential upside of killing multiple dorks for three mana is enough for me to want to test this but I can't see it being played over good spot or good mass removal cards. 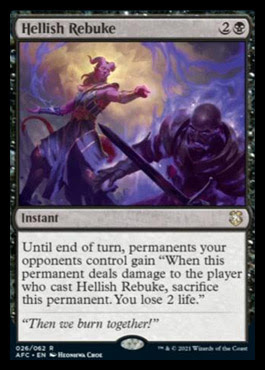