This depicts a goblin does it? A 5/3 flash for 2 is very good and would be enough for cube at just that despite being a vanilla beater. The issue is that you cannot curve this guy or play him reliably when it matters. It is a bad Serra Avenger that is effectively a dead card far too often. Lots of power but poorly suited for cube to say the least. 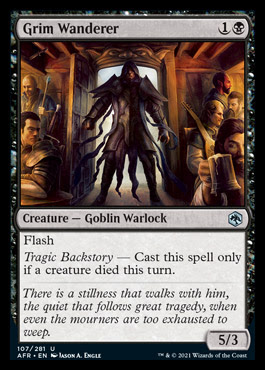 This is a top notch support card. A great sac fodder card offering ramp or removal perks for doing so. Likely making the cut in zombie tribal lists as well as aristocrat lists. I will be happy enough just playing this as a means to smooth out my curve in a bunch of decks. Incredibly tedious blocker to attack into early while still also managing to be quite good against non-aggressive decks. 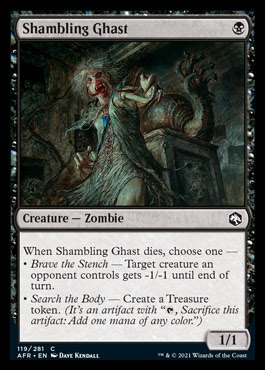 Four mana to deal 8 damage to one thing, five to split it between two things and six to take down three things. This feels like a Finale of Devastation but somewhat inverted. This is unfortunate, you want it cheap when you clear out lots of chaff not more expensive. Red doesn't really need this effect in the same way black needs Finale. You can play Inferno Titan or Glory Bringer or plenty of other efficient damage based removal cards that offer more overall. This is still a powerful and versatile removal spell but I am unconvinced about how much play it will get, you have to be relatively non-aggressive to want this in your red deck. It is also more expensive than most other removal spells, spot and mass, while being sorcery to boot. 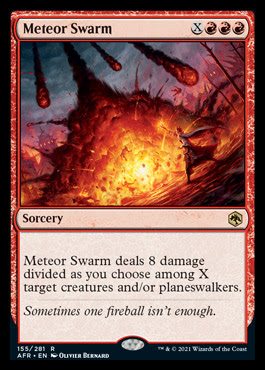 You Find Some Prisoners 8

More good modal Shatters for red. This one is either a good old Shatter or an Anticipate off the top of the opponents deck. Exiling three cards in the process too which might be pretty brutal for some combo and control lists. With Gonti it became pretty apparent that opponent's cards are typically better than your own against that opponent. This is perhaps not as true for an aggressive red deck but it certainly won't be bad. Shatter Anticipate modal card sounds like a pretty amazing card. I want to peg this around the Abrade mark. Less tempo and more utility support but none the less very strong. Better in midrange and control decks but absolutely playable anywhere as is the case for Abrade or indeed Anticipate. This subtle little card is one of my favourite from the set and one that I am most looking forward to playing with. 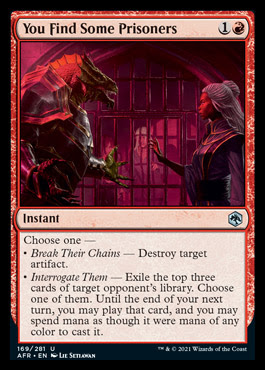 You Come to the Gnoll Camp 2

Aggressive modal card that likely does decent work if you could ever find space to play it. Sadly you just can't fit these kinds of luxury situational cards into the necessarily streamlined and redundant aggressive builds and you certainly don't want this anywhere else. A good but unsuitable card. Modal helps it with its narrow issues but not nearly by enough. 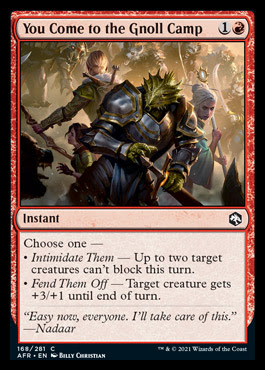 You  Happen On a Glade 2

An instant speed three mana draw two (basic lands) or Regrowth. Impressive utility that is good early and good late. Lacking in tempo and not having overly needed effects hampers the chances of this card. I just can't really imagine where I am playing this. Basic lands are fairly easy to obtain at low cost. Really if I am looking at this card I am going to play Cultivate or Eternal Witness instead I suspect. The instant speed is nice but only for a couple of decks, most green cube decks would get nothing out of that upgrade. 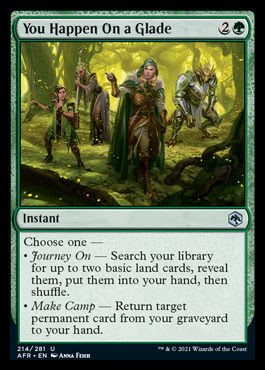 A bit of card draw with a dash of disruptive removal. The issue with this card is being very narrow and not even all that powerful. Give me Meren of Clan Nel Toth for ongoing value at this price. Just give me a Dark Confidant instead if I must. You just need to ensure dorks are dying, and that you have a plentiful supply of life to keep this ticking over and that is all too much to ask for what this offers, especially as a poxy 1/3. 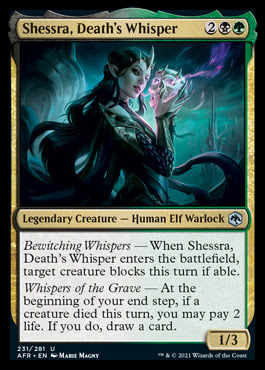 This gnome used his magic hand where he didn't ought and now he has to inform all his neighbours whenever he moves to a new area. That isn't why he gets a 0, that is due to being slow, of limited use, and not very powerful. 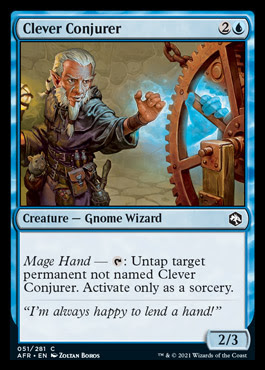 This land asks an awful lot for what it offers. It is about as bad a mana producer as you could ask entering tapped and only offering colourless. The upside then requires you to have a legend spare to tap alongside five mana... I am not even sure this makes it into a dedicated venture deck which is certain to be pretty poor itself. Awkwardly bad card. I guess it could imply I am rather underestimating the value of venture? If venture is good enough to make this card OK then some of the better venture cards must be utter bombs.... 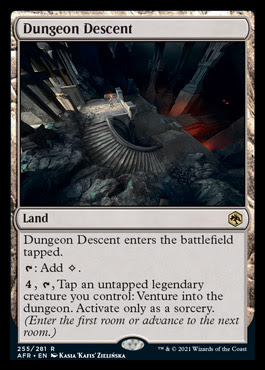 Eek. Five mana for 3 toughness and perhaps a shot at getting a venture. Zalto is just far too easy to deal with in a way that prevents any significant value. I wouldn't be hot on this if you gave it haste, that is how lame this seems. 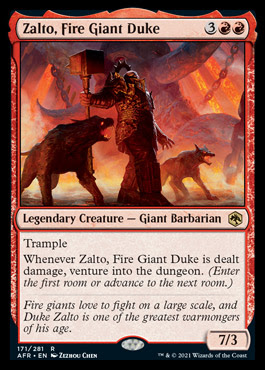 I'll play this in a venture deck and it might be OK even if the deck itself isn't. Useless elsewhere of course. The nice way to say that is to call it a pure build around. 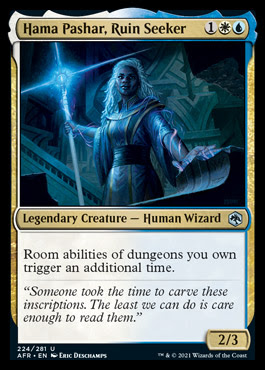 If this dude sticks around for long he gets pretty impressive. Ward 1 helps a little with that but it is hardly much protection. Varis is trying to compete with the likes of Tireless Tracker and Courser of Kruphix. This he easily does if you get to complete a dungeon with him still out. With just a couple of triggers the value is less that those big hitters but still probably enough for cube play. Flash dorks certainly empower Varis nicely to get those double triggers per turn cycle going on! Certainly one of the more stand alone viable venture cards so far. 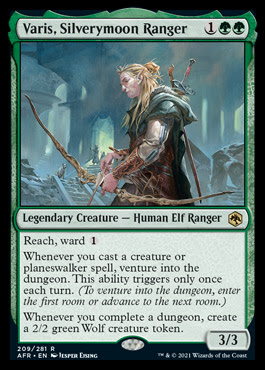 Slow, vulnerable, and gold. As a mono coloured card this might look decent and compare to the likes of Looter il-Kor. Being gold this will need to significantly out perform my expectations to have any hope in cube. 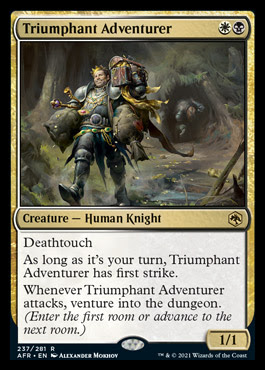