Inferno of the Star Mounts 7

This is a lot of dragon. The two red six drops other than Inferno Titan in my cube (that actually cost 6 mana) are Emissary of Grudges and Chandra, Awakened Inferno. One is a powerful uncounterable threat and the other is a six power flying haste dork. Titan as we know is a 6/6 firebreather with an immediate effect on the game. Inferno of Star Mounts is not shy on power and offers a lot of what I ask for in a six drop threat given that it looks like a mashup of the current six drops. This dragon pretty much has you dead in two hits. Yes, it dies to most removal but that removal has to be on hand rapidly. Titan dies to most removal too and increasingly so does Chandra. I think if the meta is suitably slow or slower red decks increase in popularity, or if I increase the size of my cube then this is a pretty assured of a slot. As it stands it just seems overly slap bang in the middle of the other six drops I have and that makes it a bit less appealing. For variety and option richness if all other factors are equal then you want to pick cards as evenly spaced along a spectrum as possible. Further to that Inferno of the Star Mounts resembles a lot of the five drop threats in red what with them being big hasting dragons. This has power and suitability a plenty. It might just not have the room to wiggle into yet. 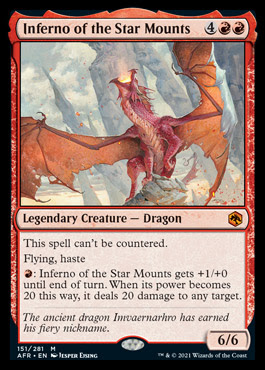 This isn't directly better than Agonizing Remorse but it might as well be. You never want to exile a card from the bin, that never feels good at all. It certainly is not a reason to play Remorse. It adds a tiny bit to the performance when you just need to answer that Uro but you tend to lose those games anyway. I love the idea that you might take a Shock over a Volcanic Hammer with this! Check for Traps is a pretty dull card that fills a gap where not enough good one mana discard exists. If there were a few more cards closer in function to Thoughtsieze and Inquisition of Kozilek in existence then Check for Traps and cards like it wouldn't really feature in cubes. As it is there is space for a card or two like this and this is one of the best. Mostly for hitting any target spell and exiling it. Reliability sadly trumps interesting. 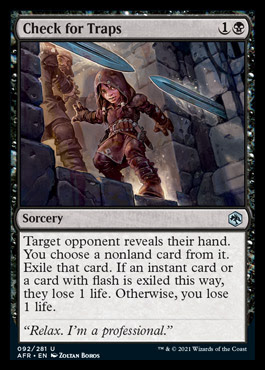 I really like this card. Part Bonesplitter and part Mogg Fanatic. Sadly this is much more cute than it is powerful. It costs too much for what it offers. There is no obvious synergies or archetypes looking for this effect either. Should help make booster draft better for the set at least! 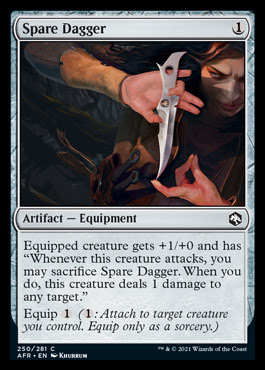 Not at all powerful but cheap, two permanents in one, and unique. I don't see ever using this but it is not impossible. 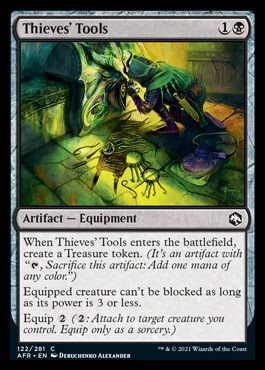 I like this and think it is quite close to cube worthy. Mostly this just pushes home the absurdity of Ragavan. In practice Robber will not work out well. The body is very low impact, especially on offence where you want it to be. It is too easily outclassed and thus negates the effect. Slap on some deathtouch or a form of evasion and this would look impressive. As it stand the card simply won't produce treasure with any sort of regularity and will consequently be awful. Some tribal builds might play this. 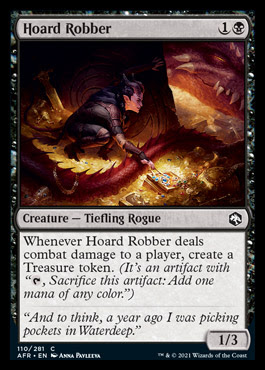 If you want some filler for your tribal deck then this is one of the better cheap vanilla dorfs. That in itself should tell you all you need to know about the present viability of the tribe. 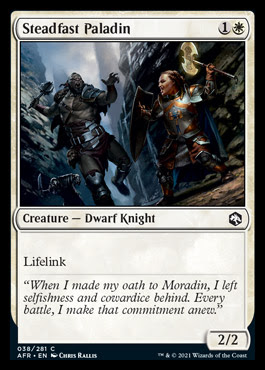 It is a little sad how exciting this card is. Green has Llanowar Visionary, blue has Cloudkin Seer, black with Callous Bloodmage, and red with a litany of three drops that win the game, some of which draw cards...White being the home of flicker effects has ached for a general purpose card draw dork. It didn't need to be good, just playable, and this ticks that box. It is almost all white really wants as filler! This will see a bunch of play in white decks across the spectrum. It will receive global buffs, hold equipment, trigger effects on other cards, eat a whole lot of friendly flickering, and generally do a lot of heavy lifting in the colour. The life is super minor, almost anything else would be better, even vigilance! It is still nice to have and marks this as distinctively white. I couldn't quite bring myself to give this an 8 due to almost shameful levels of power. It is just so incredibly playable and will see sufficient play to rank as an 8/10 card. 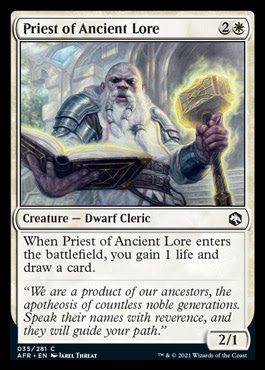 Another cute and cool piece of cheap equipment that isn't packing enough punch to be worth running without some serious synergy support. This is a very minor defensive card you want to play in a dork heavy deck. That is already a bit at odds. Equipping at sorcery speed also makes it a bit harder to get value with the ward. 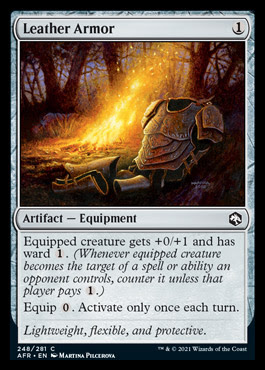 Font of Fertility, Diligent Farmhand; this is neither better nor worse than those cards directly. They are fine but not quite cube worthy. There is just enough better ramp that this is only seeing play should a number of synergies line up. 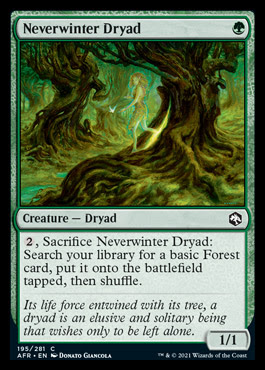 More very minor upgrades to playable cards to tempt you into building tribal dragons. This is better than Draconic Roar in multiple ways. The baseline on this is so acceptable that you really don't need many dragons to push this into the realms of the good cards. 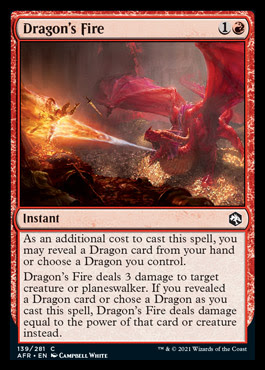 I'm not even sure this makes it into a tribal dog deck and there are only 18 white dogs costing 3 or less... A three mana 1/1 with no EtB effects is a hard sell to begin with. Doublestrike is a start but phasing out for 4 is laughable. The card isn't worth 3 to begin with, I'm not holding up four to keep it safe... 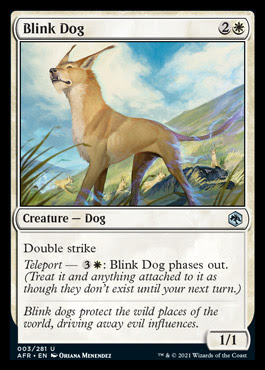 Temple of the Dragon Queen 1

Mostly dual lands are going to be better than this. This is basically a super Pathway if you have dragon support. Quite limp without dragons and not any sort of lock in even in a tribal dragon deck. 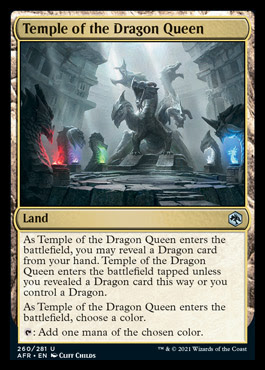 This dude does a very poor Griselbrand impression. He has a pretty unimpressive body - big but nothing else going on. He really needs more mana investment to draw cards for you is the main criticism here though. Sure, you can negate the life loss aspect with a sac outlet and some shenanigans but you are then paying 9/12 mana for seven/fourteen cards, even if it is split into a 6 and a 3/6. There are better dorks, better threats, and far better ways to get loads of cards. Best, and likely only thing to do with this is using Necrotic Ooze for the good times. Buried Alive for Skirge Familiar, Asmodeus the Archfiend, and Borborygmous Enraged for a pretty easy instant kill with an Ooze. That is almost a one card combo if you are setting it up with the likes of Grisly Salvage, Ransack the Lab and Grapple with the Past. 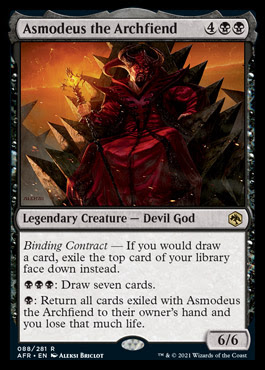 This is Knight of the White Orchid reworked. It is  slightly weaker on the land front getting it tapped and only basic. It is also less good in combat and more vulnerable losing first strike and a toughness. On the upside it hits harder, trades better in combat, often forcing it with the vigilance, and most importantly costs a single white to deploy. That latter fact makes the card a lot more playable. Vulnerability isn't a big deal as it is already a cheap two for one. On the draw this card can be quite the bomb and is a godsend in a screw. When on the play the card is pretty poor so much so that you will often board it out if you have good replacements. I cannot see many midrange decks playing this eagerly as they do not want to be missing land drops. Given that this is best on the draw and the draw is rather weaker in magic, especially powerful formats like cube, this should play nicely and bring a bit of balance to things. 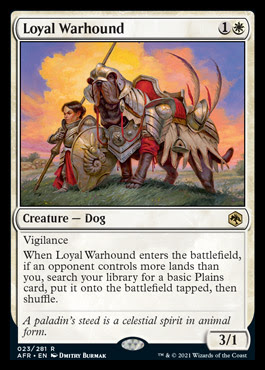