Fast acting and hard hitting. This will clear out a yard pretty quickly and do some growing and life gaining at the same time. Generally the disruption to the bin will be worth more than the life but the growing will be really scary. You don't need to trample over for much or have that many dorks to exile before this gets pretty out of hand. Imagine a poor red mage with a full bin and you sneak in with this, put it out of burn range and gain some life, threatening to do a bit more of that the following turn, all while kicking their head in hard and fast. This is a Scavenging Ooze grafted onto a Glorybringer or Questing Beast framework. Those are good cards and so I am expecting pretty reasonable things from this. Not quite as naughty as Questing Beast or indeed Glorybringer but not miles behind. I am pretty sure I prefer this to Verdurous Gearhulk. It does much more by itself, affords more disruption, more utility, and should be less vulnerable thanks to being Shatter proof. It is more eggs in one basket than Gearhulk but it does do more right away more consistently. 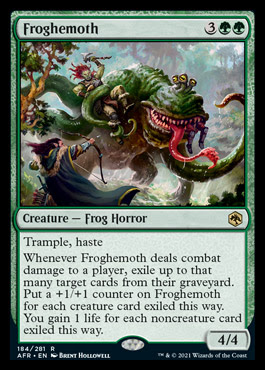 Kick in the Door 2

This does a lot for one mana and it is one of the quickest and cheapest ways of venturing into the dungeon on offer. Speed on venture doesn't sounds the most important consideration so really we are just looking at what this card does. We can basically ignore the walls bit so it is a +1/+1 counter and haste buff to a dork and an easily fizzleable venture should the target dork be removed. A single venture is not at all exciting and can be replaced with scry 1 or one of the other first room effects for cube consideration mostly. The value only goes beyond that with more venture in the deck and that isn't looking at all likely with this card. Red venture stuff seems poor. Haste and a buff are not all that exciting either. Haste effects that cost mana on the turn they apply lose a lot of their vim due to playing under curve dorks. The counter makes up for this but it just makes it not bad rather than good. I like Kick in the Door but it just isn't doing things you want. Yes, it is good value for mana but it is bad value for card and neither all that useful or playable overall. 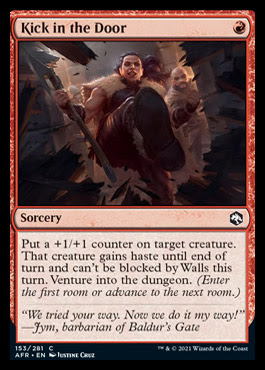 One of the more reliable ongoing means to venture. A basic three mana rock isn't impressive but it is at least useful. We have increasingly good mana sinks in cube meaning excess mana and late game mana are all good things. I very much doubt that this cuts it in cube but it looks like one of the best ways to help support venture and so I will be slinging one in to begin with so as to give venture the best possible shot of working out. I don't normally come close to testing out cards this low ranked so that is a win of sorts for this little card. 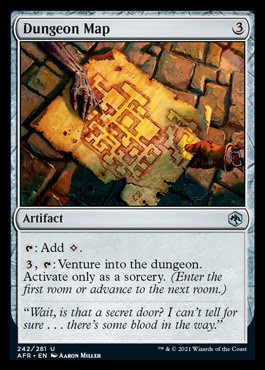 A clunky slow gold horror of a card. You can't play this without loads of venture basically ensuring you will complete one dungeon pretty consistently. As such this is a build around card at best and not even a very impressive one. 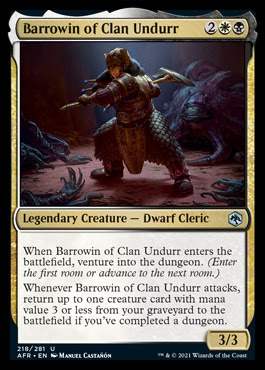 Youch, a 3 mana sorcery speed Shock... I want a treasure producing burn spell but this is so inefficient I can't imagine I would even play it in a treasure themed deck. Despite how awful this looks I can't quite bring myself to call it unplayable, it is just very clean and direct. 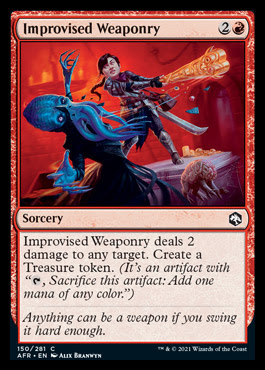 Not proactive enough to excite as a venture card and far too low powered and dull as a Raise Dead. 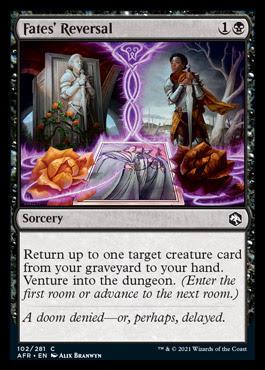 Mild potential to bulk out a venture deck. Far too mana intense and low threat to use as a Blinking Spirit type of card. 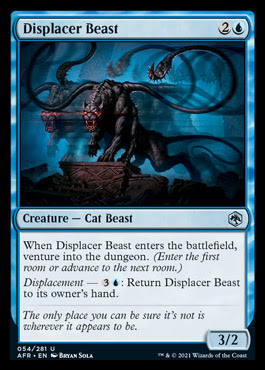 Being cheap, an artifact, a mana sink (4U to venture to those who can't speak foreign or are too lazy for google), and a Steel Wall this has application. You can use it to win with infinite mana while also helping you setup and survive. It might even be quite cool in a Training Grounds style deck but for singleton we will need a little more redundancy on that front. On the pricy side for a venture plan and far too low powered to play without significant synergies. 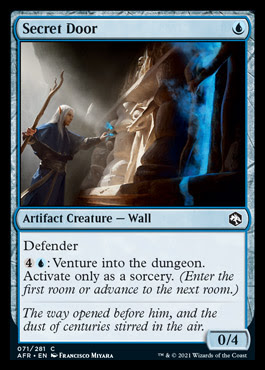 Instrument of the Bards 1

This is a pricy way to draw cards. Sure, it is a (pretty awkward) tutor and probably gives the EDH community the total horn but in a 1v1 draft setting the poor tempo of this is shocking. It is 7-9 mana before this is a two for one, all the while being the anti tempo! Tutoring is of less value in draft too. Being too slow for combo and constructed and too bad for anything else I don't expect to play with or against this. 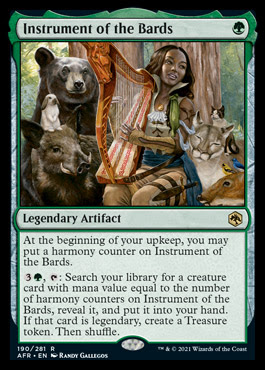 This is a versatile and high powered card that should win the game for you when you pull it off. What holds Orcus back is that he scales up slowly while being gold and very top end. You can flop him out for relatively little mana but the low end performance isn't impressive, it is just better than nothing. It is all about recovering when in trouble thanks to a massive Wrath or a mass recursion into alpha strike. These sorts of plays are going to cost you much more like 7 mana and on up into double figures. Ugin is a cube bomb and it is because he is versatile, game winning, and a powerful recovery tool which sounds liek what I described about Orcus. Ugin, like Orcus costs a lot but Ugin has no low end modes but then Ugin is colourless rather than gold. Orcus seems too powerful not to test but I think his narrowness will be his undoing in cube. He seems more than there for power. 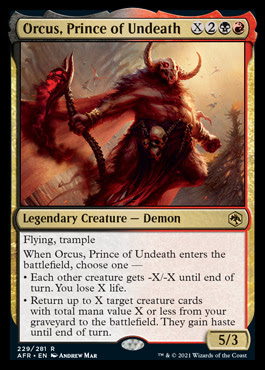 Much as I have not given this a 0/10 I can't see me ever running it. Ward 1 isn't a very exciting buff and white isn't a very dragony colour. A 2/4 for two flier is nice but in a deck sufficiently full of dragons to make it so I am less impressed. I feel like you will need removal and interaction in your cheaper cards, or at least chumps that cantrip like Wall of Omens. Your wealth of dragons should be enough power and threat to win with. 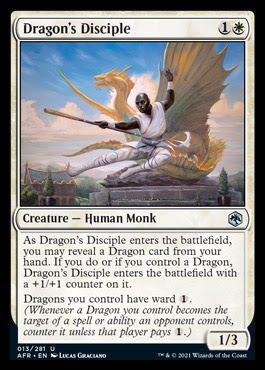 Still far too far off the mark for a standalone card. The EtB ability isn't getting you far enough along the way to helping with the second ability which is needed to give this card enough potency for cube. Birding things is a really cool effect I hope to see again. It can be used on their stuff or your own in a number of cool ways. It just won't happen very often because you won't be completing dungeons. 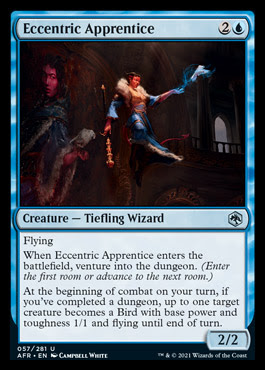