A reasonable blocker but giving away cards is dodgy, especially when under tempo pressure. As a Wall of Omens this is unplayable. Where it is potentially playable however is as a combo or engine card a bit like a Hornet's Nest. Certainly on the narrow side but not entirely without hope. 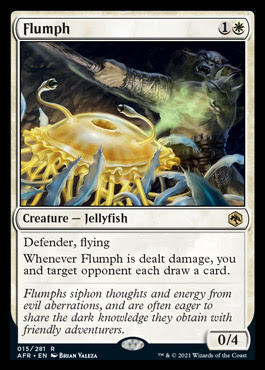 This is all a bit silly. It is not an unreasonable assumption to say the total mana value of a cube deck was around 60. This in turn makes a card on average to be 1.5 mana. This is about 13 cards. This puts it up there with the most efficient mill spells on offer and cube isn't even a format with a very low average CMC. There is now a really high density of mill cards around this power level. Landing two wins most games and landing three is game. This means you can make a very consistent and quick deck or a very consistent and very safe deck that trades clock for security. Mill was already one of the best archetypes to rotisserie draft. It really didn't need the help. Yes, you can counter mill with Eldrazi and such things but not very reliably and there are work arounds for those too. Mill is probably at the stage where it needs some degree of banning out in 40 card lists. This is a powerful card but it is a void of gameplay and fun, avoid at all costs! 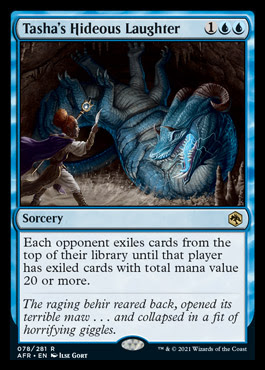 Dungeons are a new mechanic that remind me of lesson/learn. Much like lessons I will simply allow any dungeon to be available at any time to any player and not bother with having to draft them. I suspect they would be far too narrow to use in cube if required to draft both dungeon and venture cards. The less you have of either dungeons or cards with venture the less good the other group becomes in a draft to the point at which there is likely no point including any. There is a lot of flexibility contained within the venture into the dungeon keywording. This is obviously something I like a lot however the added phaff of having extra cards to dig up is a bit of a turn off. As such dungeons will have to over perform to remain in the cube. Lesson/learn has been excellent and yet they also has an uncertain future due to this element of phaff. 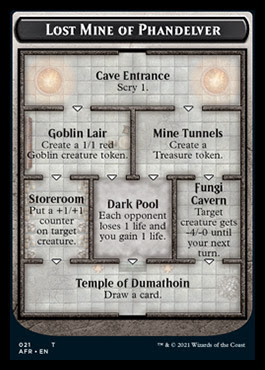 There are only going to be three options on dungeons to begin with which seems like a good design call due to each one having such a wide array of variation. Mostly the effects are worth less than a card and a mana. Only the last effects on the tougher dungeons could be said to be worth more. Those require a lot of ventures or at least some extra investments of resources. It is pretty hard at this stage to chose between the dungeons for power level as it will depend so much on the cards printed with venture. The more ability you have to venture and the ease and frequency with which you can do so will tend towards favouring the longer Dungeon of the Mad Mage. The more the cards tend towards payoff for dungeon completion the more the shorter dungeons will appeal. Tomb of Annihilation is the quirky one of the three as it allows for rapid completion at high cost or reasonable completion speed still with some extra, all be it symmetrical, costs. When you have synergies (in cube this is mostly black and red decks) involved with those extra costs this dungeon jumps in power significantly. Not only will the potency of the dungeons depend on the nature of the venture cards and to a lesser extend the kind of deck you have they will be context dependent most of all. I imagine the state of the game being the most significant factor in dungeon choice. A treasure is going to appeal a lot when you are hard on mana. Life looks better against aggressive red players etc etc. The early things you need right now will dictate much. All the dungeons potentially being viable is what you want and so it looks like the design is reasonably on point on that front. 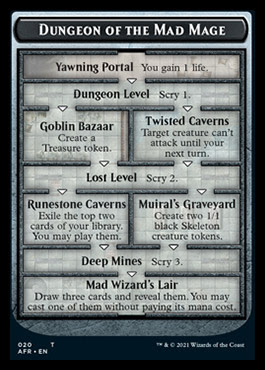 The Lost Mine of Phandelver seems like it will be the baseline for assumption of return. Scry 1 into make a 1/1 token into put a +1/+1 counter or drain into draw a card and complete. That is a decent return that is good for any deck in any situation while being fairly quick and direct. Treasure over the 1/1 will also get taken a lot but that will hurt the potential value of the third level. Regardless this seems like such a generically reasonable return compared to the others that it will be the metric I use to evaluate the power of the venture cards in a vaccum. If The Lost Mine of Phandelver was a four stage Saga I would consider it at 2 mana. At three mana I wouldn't be interested. I would also pay no more than 2 mana for the Tomb of Annihilation as a four stage Saga. It would be powerful but it would be narrow and slow. Roughly then we are getting about half a mana of value per trigger on a venture card. It is probably closer to a third of a card per trigger than it is to a quarter if you want to look at value rather than tempo. It is also less return than this at the start of a dungeon and more towards the end. This in turn makes the likely value of venture cards in cube less than my initial estimation of half a card/mana as we will clearly see way more early dungeon triggers than late ones. At a guess I suspect the scry 1 (level 1) will be used three or four times as often as the draw card (level 4) on Lost Mine. 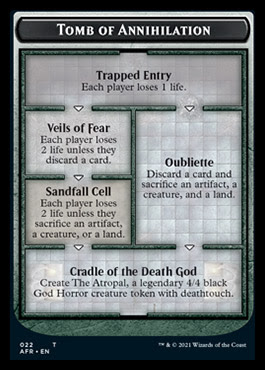 Trying to rate the dungeons is a bit silly and meaningless. They just are. They determine the power of the venture cards but trying to rank them compared to normal magic cards is neither possible nor useful. You have the high payoff slower Mad Mage Dungeon, the generically all round good Lost Mine, and the quirky Tomb for synergy and scaling potential. The first and second abilities on each dungeon will be the most important to consider as they will be the most commonly used and the most immediate of the possibilities. So, with that out of the way, let us look at some cards with venture armed with some ideas of the worth of venture.

Unplayable. A 2W 2/3 double strike wouldn't be good in my cube so a card worse than that has no chance. This is doubly bad too as it is a card that depends on a narrow mechanic without supporting it in anyway. This guy really needed some venture abilities. 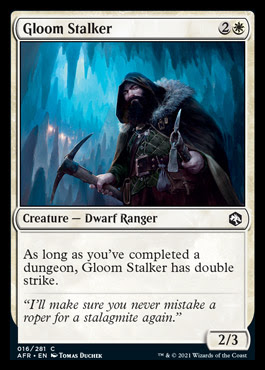 This is closer to the mark than Gloomstalker as it does some work towards completing a dungeon and a three mana 3/4 flier with some perks is somewhat appealing. Sadly this is a 0/4 most of the time  with a single scry and that makes it garbage. 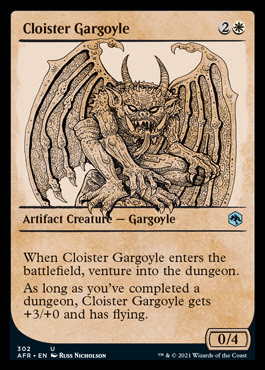 A four mana 2/5... Compare this to almost anything else half reasonable with a combat damage trigger in blue and it is laughable still. Even if we round up the value of a dungeon trigger to a card and a mana this is still shocking. Thieving Magpie hasn't been a good card for a long long time now and this is still worse. 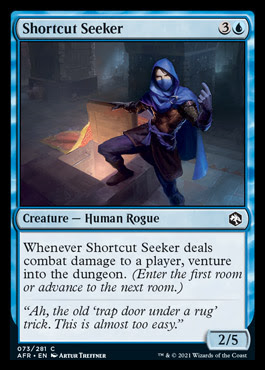 This is really only getting a rating this high as a bad Diregraf Ghoul is still fine. There is not a wealth of cheap aggressive zombies and so this will get some play outside of decks with any venture. There is a small chance there is enough venture for this to be better than Diregraf but that seems very unlikely. 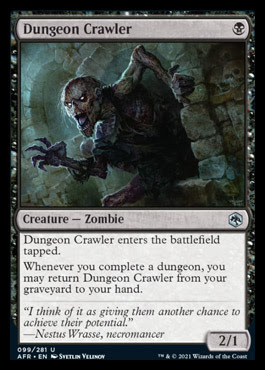 Here we have our first serious contender for a viable means of venturing into the dungeon for cube. Power wise this thing feels in the Brimaz ballpark which is cube worthy but not blowing any minds. Nadaar completes Lost Mine in three attacks which should be game winning (that third attack comes with the Anthem bonus and should be pretty devastating regardless of the bonus value up to that point). That is the sort of level of power needed from a three drop ongoing Rabblemaster style of card - game winning in 3 attacks. The last trigger is the biggest step by quite a margin and should Nadaar die before that he is rather less impressive. Other venture cards will improve Nadaar rather a lot as anytime he comes down already as a Benalish Marshall then he is utterly nuts. A three mana 3/3 vigilance with scry 1 is not a shocking floor but it is pretty weak as far as cube goes and so Nadaar is vulnerable. He is also only a 3/3 and so getting venture triggers might be tough in some matchups. I want this guy to do well as it is an incredibly option rich card which white otherwise has little access to. I am not holding out too much hope. Not holding up well in the Doom Blade test nor getting much done against any 3/4 or bigger blocker are turn offs. I think this is going to depend on other venture cards. Doing by himself just won't payoff enough and he won't cut it. If there are other good venture cards you might play with Nadaar then he seems like he will be great. 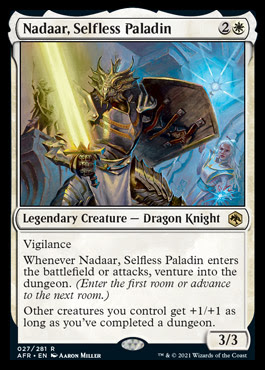 Without a lot of other (better) venture cards I can't see this being cube worthy. The starting loyalty is low. The -2 is a little narrow and does nothing to provide tempo or protect Ellywick. The ultimate is OK and will win games but it is one of the weaker game ending ultimates that can be found on walkers. The +1 needs to do a lot of heavy lifting for Ellywick to be playable and it rarely will. The early venture effects are low impact and low tempo. You cannot easily gain protection or value from them and so Ellywick lacks any real impact. You can kill her long before she is threatening or really done much relevant. With some consistency in other venture cards she might gain enough value on the +1 to become playable but that is quite the long shot. 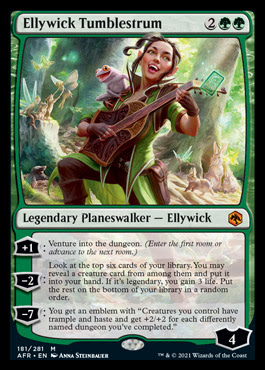