Perfect card for any sort of Hardened Scales deck. Cheap, direct, and top tier scaling with key cards.    Not doing enough for lists that are not playing heavily off synergies. 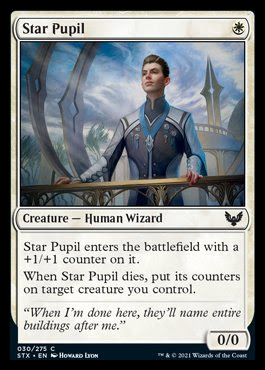 Glorious design. Finally an interesting white disruption tool that isn't dull or crap and actually feels like a white card. Orim's Chant and Abeyance are pretty dull, Mana Tithe is a blue card, one for one spot removal is pretty dull. This is great. This does a number on players leaning a bit too hard on mass removal. So much so that this could bait a Counterspell which is delightful. You don't feel bad about your first two turns of play getting Wrathed when they had to counter your turn three dork. Feels even better when they can't and you then win! This was one of the reasons that Hallowed Spiritkeeper is decent but it is reactive rather than proactive. It also only really answers other answers, it does little to nothing in the face of combo decks. The best thing about Spellbinder is that it is playable against everything. Most white disruption is great but very specific in what it deals with which is a problem in cube. Ultimately it means white lacks answers to rather more than it would like as narrow cards as such undesirable inclusions in cubes. Spellbinder provides those answers. It is a lot like Vendillion Clique. Rather than turn the problem card into a random card it just makes it cost two more. That in turn makes Spellbinder much better on curve and more of a tempo play which again feels very white. No flash is a downside and if both cards were blue then Clique would be better, if only a little. With blue having plenty of rounded disruption and white having scarcely any Spellbinder should see a whole lot more play and be rather more in demand. If they never cast the spell you hit then you get a very mana efficient high tempo two for one. If they do then you get an even higher tempo 3/1 flier with a net cost of one mana that also provided information and disrupted your opponents plan to some extent. Both those modes are fantastic and as such, so is this card. 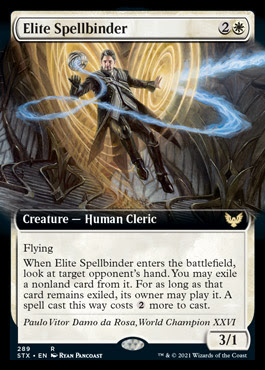 This is somewhere around Abrupt Decay and Angrath's Rampage as far as cube play goes. Rip Apart is a weaker cube card than Abrade being gold and sorcery despite having a decently bigger range than the mono red spell. Weaker than Abrade is not a problem with Abrade being one of the best removal spells in cube. Functionally this card is very impressive. It kills the vast majority of non-land permanents in my cube and should do so in most others. Those it can't kill it can at least usually contribute to their removal meaningfully with some other source of damage. Beyond that it is really only the hexproof and indestructible type of things dodging this. That makes this card a great early interactive play that is option rich and retains high value and utility all the way into the late game. It is reactive and yet rarely dead. It is broad enough in application with high enough tempo that midrange, aggro, and control will all take interest in it. There are really only two things I have against this card. The first is that one for one removal is rarely all that powerful, especially sorcery speed removal. They are inherently very fair cards. This is not that much better than a wide array of alternatives and that leads into the main issue, this is a Boros card. When I have the likes of Unexpectedly Absent, Abrade, Council's Judgement, Cast Out, red burn, even Goblin Cratermaker, then Rip Apart just feels like it might be a wasted slot. Boros is simply not a commonly played colour pairing and Rip Apart isn't a real pull to the colour. Unless Boros takes a decent jump in popularity I don't see this lasting in my cube despite having the requisite power pretty comfortably. White and red are at least getting a lot of more interesting, interactive, and generally midrange cards these days which might well be enough to push the colour combination. 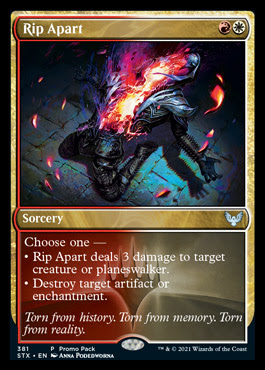 Powerful card but very needy. Too needy by far. Gold, must survive, must get some damage through in combat, must have target in bin. Otherwise Trained Armodon. Gross. 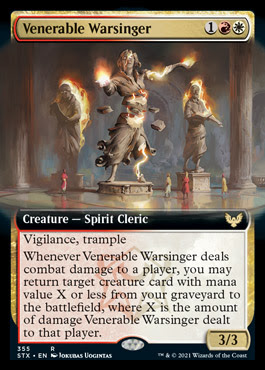 Not quite enough for drafting cubes. Potential for abuse in some narrow settings. Decent value and scaling while being a nicely cheap card. 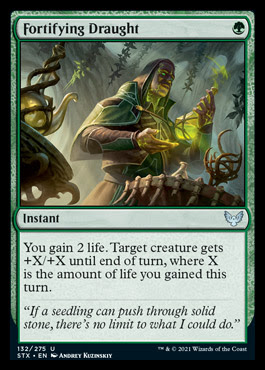 This is just a beater, often just a bear. It is low threat, low power and low potential. It looks a lot better than it is and it doesn't even look that great. 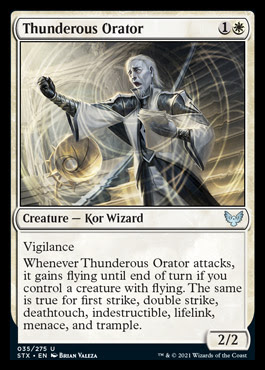 A big old flicker effect that counters removal and abused EtB effects. It is a bit too situational and pricy to get used for just the former but I can imagine this getting a mild bit of love in decks already based around abusing EtB dorks. 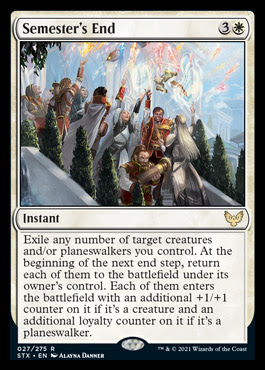 Useful to loop things, say Semester's End... but really far too expensive to play without some serious combo potential. Mostly this is only worth mentioning because of the colours it is in. If this were basically any other colours I am sure we could find better ways to do what this does. 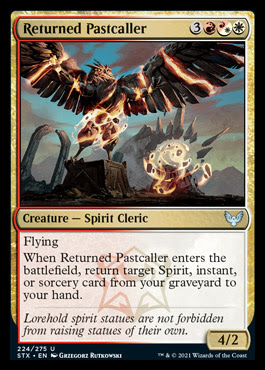 Poor body that really needs to stick around to do that much. The recursion is great but you need to have things, hit the right things, and then spend mana on actually doing the things. This makes planning hard and really narrows the card in where it might be good. Really you want redundancy in your spells. Burn decks are the only place I would want this kind of effect and I just don't want it on a slow four drop in my burn decks. Even if it is gaining me some life. Not a big sell. Either life is going to be hard to get out of this or you are not at all bothered by having more life. This is still quite a powerful card, it is just poorly suited. 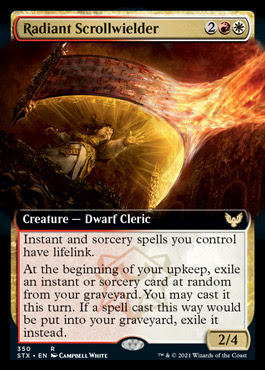 A bit of mill, a bit of life swing, and some late game low value mana sink. This is low impact and narrow all at the same time. It isn't exactly a terrible card but I cannot fathom a situation in which I might play this and I can get pretty creative and optimistic about such things. Doesn't bode all that well for this. Oddly I still quite like it. Boros self mill kind of feels like white is doing something interesting... OK, I have a suggestion of where one could play a card like this - an enchantment archetype in Boros that is some kind of lock or control deck using the likes of Replenish where this could help you setup while being cheap, having the right type and later contributing to the win. Sounds very janky and silly but at least plausible. Especially in EDH where colours matter that much more. Usually your enchantment decks just use green or blue for the various things they do well. Cards like this help let you build enchantment themed decks with Boros commanders which is great for creative and fresh building. 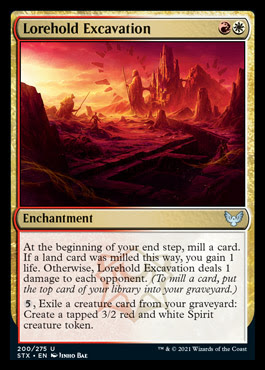 Powerful effect that you can abuse with relative ease in constructed settings and not at all in cube draft. You can make a lot of very resource efficient 3/2 tokens with this, they might even be 4/2 tokens! Sadly this is a five mana dork and so building around it isn't really a sensible idea leaving this with little to no chance of seeing play outside of a commander setting. I have built around Desecrated Tomb before and was pleased with the results. That was a somewhat grindy deck where as Quintorious feels better suited to a burst strategy. 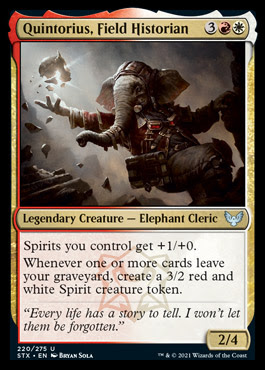 Nice lands for budget cubes. Mana sinks are hard to come by in those formats I have found, as is fixing. Not enough power to compete outside of budget cubes. 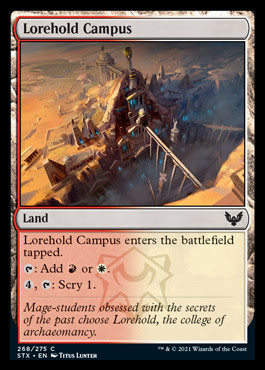 Mind Rot but with a bin clear as well. This is quite scary, cube decks hate having their bin messed with. Mind Rot is low power but not unplayable. The exile component is far more varied being of minor value most of the time, game breaking some of the time, and a blank the rest. I feel like black probably just has better alternatives to this when it comes to yard hate, either directly such as Nihil Spellbomb and Cling to Dust or indirectly with things like Elspeth's Nightmare. This is better than it looks but still neither quite exciting or powerful enough. 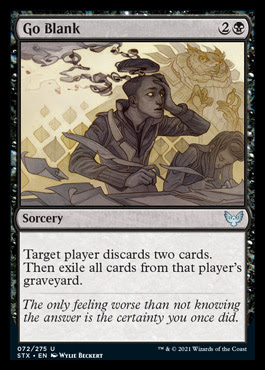 Great effects but at too much cost. Not only is this a 7 mana gold card but it also asks you to build with it in mind as well. Ignore the effect and you might well end up with Shocks half the time and nothing at all the other half. I am not even sure how I would build with this so as to get loads out of the trigger. Play another colour for some raw card draw? Sounds bad. There is likely some build where you chain this into Relentless Assault effects and one shot people. Sounds janky and a bit silly if a little fun! Outside of quirky combos or EDH I can't imagine playing this. 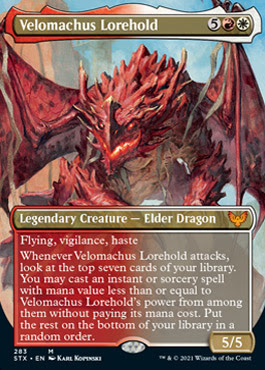