This is actually pretty powerful. The fixing element really helps the fact that this is essentially a colourless land. Normally I am pretty strict on how many colourless lands I will play in a deck but this is one that somewhat doesn't count towards that. It then also adds counters very effectively. This is a very high utility land. It comes in untapped, can help fix, and can provide extra tempo and value. This has a very real shot of lasting in cube with loads of MDFC cards with different colours on them rather pushing the desire for coloured mana access. This is still a fairly marginal card. Including might cost little, it might even help, but not all that often or by all that much. Consequently this might not be worth running in cube even if it is good enough to which is the fate of most utility lands. 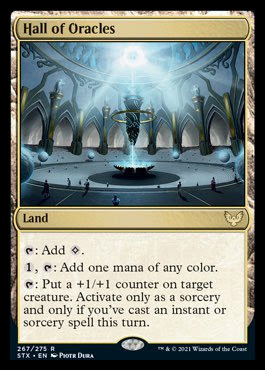 This is all a bit over the top. You can double ramp for four mana no trouble and without helping out the opponent. Giving them a land in play is certainly a whole lot worse than getting more land in hand is good for you. The six mana mode is just not at all the thing. You should be past ramping by then. If you must then at least play Primeval Titan! This is pretty exclusively an EDH card as far as I can tell. 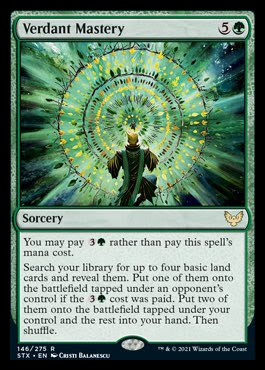 So this is two things on a bear. It is a looter that costs one mana to use and must attack to do so. That is pretty terrible. It is also a kind of madness giver to instants and sorceries. Attack, discard then exile and cast my cheap instant speed removal spell to clear the path. Sounds like I paid one to draw a card. Theorist can also just sit back and help empower other discard effects that neither need to attack or pay mana to use. While this is all quite cool it is a little bit narrow and situational. You need a lot to line up for any of the potential uses. The floor is just a little weak here and so I don't see it performing at a high enough standard. Nice card for some discard themed build around lists. 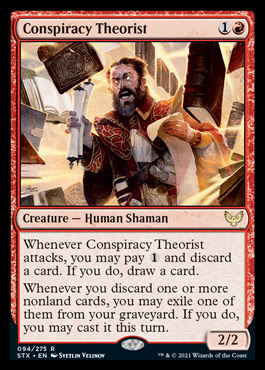 A very potent Wrath if you have the right things to remove, otherwise a dodgy Pyroclasm. There are not all that many high CMC things you can exile with this in cube and you have to get them into the bin in good time and keep them there. That is far too many hoops to jump through for a mass removal spell. You need your answers to work as and when you need them and this might well not. It has some really nice synergy with the things you can discard for treasure. They can make this a turn three Wrath with very high damage output. That is a thing for standard however and not cube. I can't imagine a cube deck that is playing this over alternatives, even if it naturally supports the Intervention. 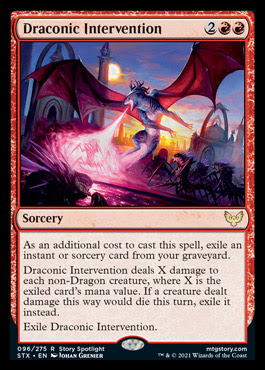 I like this rather a lot. The different names part is a blank downside for cube and EDH which leaves this card sat somewhere between Tooth and Nail and Collected Company. Those being cards that have dominated formats and still resonate as big names is a positive start for Appreciation. Essentially this finds your 3rd and 4th best dorks at X or less mana and puts them into play. Finding things in the graveyard and shuffling them back in is lovely too. It means this card scales very well into the late game unlike cards such as Birthing Pod which run out of steam shockingly quickly in cube. This is always a two for one assuming you can find at least four dorks. It then gets increasingly mana efficient as you go up in value for X. At X=3 you break even on mana and get a free two for one (in that it costs you no tempo). That is likely the sweet spot. Much as X at for, five, or six, is quite spicy it is rare that you have four creatures in those slots. They are less populated slots and are typically filled with planeswalkers. In EDH this will be mentally good as you will almost always have at least 4 great targets, quite possibly all the way up the curve to six or more! In cube it is very possible that X=6 can only find one six drop, one five drop, and a couple of four drops. I am still not unhappy with getting two four drops for 7 mana and 1 card but it is certainly not the ceiling. It is also very possible that by the time you are playing it at that kind of mana you have already had some of your top end dorks exiled thus further reducing your options and value. Even so, I don't think you need the top end for this card to be solid. Cheap dorks are good in cube. It might not be that mana efficient at low values of X but it is still decent tempo while also being card advantage. A pair one on drop mana dorks is quite nice even on turn four! You do need some redundancy in your cards for this to work. Unlike other tutor effects this cannot find your situational cards like Plague Engineer or Reclamation Sage when you want them. So, while this has significantly less build requirements than Collected Company it does still suffer from those issues in cube. Ultimately it winds up being a broader, more consistent but less powerful Company. While being playable enough for cube it might not be quite powerful enough and will need some testing to find out. Seems quite on the line at present and if I had to call it one way or the other I would go with not lasting. Interesting and powerful card none the less. 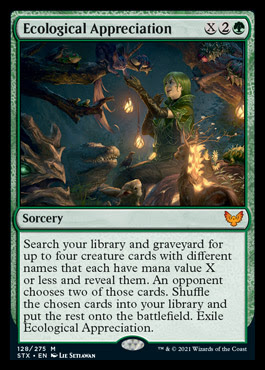 If you want to put more lands into play there are an array of cheaper and more effective dorks. The same is true of drawing cards. Having both in one place isn't a big help when neither offer a power level you can get excited about. 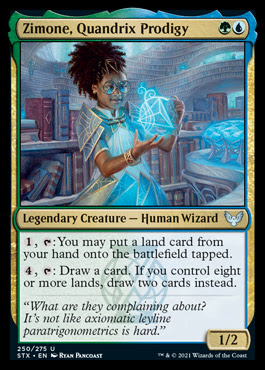 A bit narrow and a bit unreliable. Narrow as you can only play it in Simic or mono decks. Unreliable as you need this to be making at least a 3/3 to be at all interesting and even then it isn't impressive. You need 5 or 6 cards in hand before this looks good. As such, it isn't. 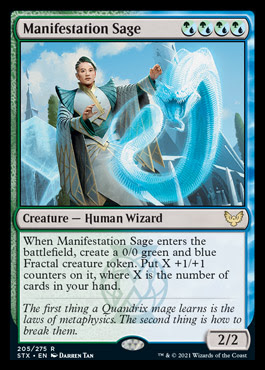 You might play this for the treasure cycling part in a deck with a lot of synergies. You shouldn't elsewhere. 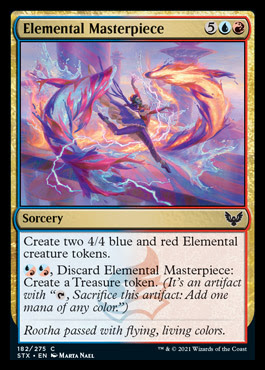 Flexible little self Fork card. Probably never using this but lovely that it is common. Opens up a lot of interesting stuff for pauper I expect. 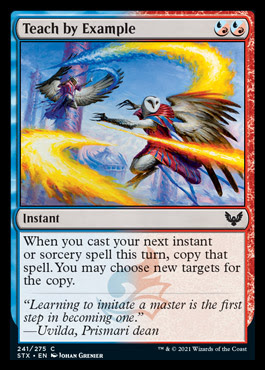 I don't like this much but it seems like it might be a viable win condition. It is too slow and clunky to play in an aggro deck. Just do more damage and play more threats if you expect to be getting a good number of attacks through. In a control deck however this could build up over time through tapping it for mana and could have a couple of extra tokens thrown in with some thopter, spirit, or even bird tokens. Luckily you need to get the 10th charge with an attack trigger to win the game which stops this from being a combo card you can proliferate up and win with in some cheeky way. Much as it is viable it isn't that reliable or high powered. There are probably even other cards that are both mana ramp and threats that would be better to play than this. 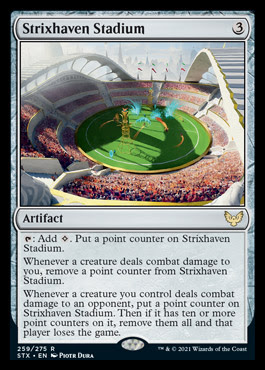 Boomerang and Recollect (ish). Not a match made in heaven. Low tempo and low value here. 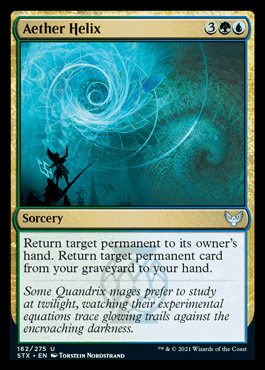 This is the other big name from Strixhaven putting white on the prowess map. An OK threat by itself and a terrifying one to face with some actual board. The fate of this is very tied to the one drop. Either both make it or neither do. Certainly powerhouses when built around but perhaps a little narrow and out of place for drafting cubes where white has few payoffs and low numbers of things supporting magecraft. 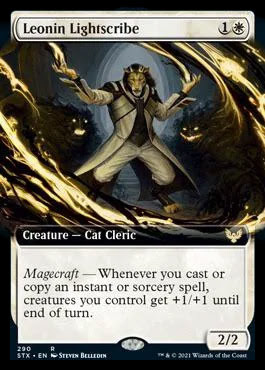 Triple Gamble at four or five mana. Seems pretty bad as a Gamble but might be more reasonable as a kind of Buried Alive style of card. Combos quite nicely with Faithless Looting ensuring you can ultimately get at least two things in the bin that you want with this. Still, four is a lot of mana for this effect when you can get a lot more done with things like Gifts Ungiven or just some looting. There are no combo decks that are good that this seems to fit in and no obvious way I can abuse this. An interesting card for sure but presently one with no clear home. 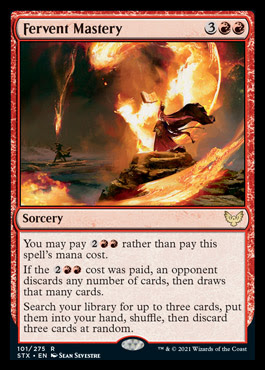 Divination Growth Spiral. While I do quite like this it is all a bit fair at four mana. Ramp matters less at that stage. If you cannot make a decent amount of tempo back with the land ramp then you have a pretty underwhelming draw spell. Mostly this is a bit gold for cube but it is a fine card. 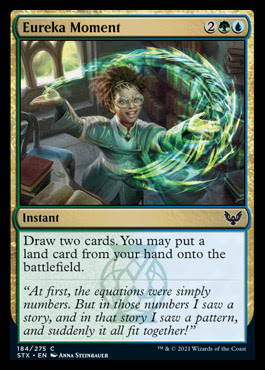 This is just worse than Rampant Growth in most cases. Off the back of a sac land a 3/3 land on turn two seems decent. Beyond that I don't want my land ramp spells opening themselves up to an abundance of removal. If you can Shock my ramp I at least want it costing one mana! This isn't a bad card and likely has some synergy applications where it is preferable to Rampant Growth, I just think it is a little way down the list as far as drafting cube worthy ramp. 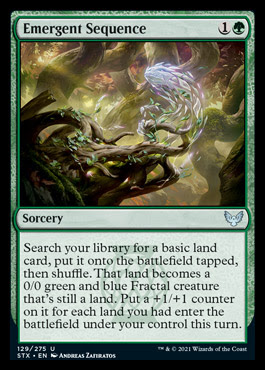 A very interesting prospect to abuse. I like the idea of tapping this for a whole tonne of mana in a lifegain deck. This is the kind of payoff I am looking for if I am to entertain green as a good colour for that archetype. Sadly this costs 4 and as such is pretty slow and risky. I would take a substantially weaker version of this at three mana over this. A lot of latent power here but very hard to tap into that power usefully. 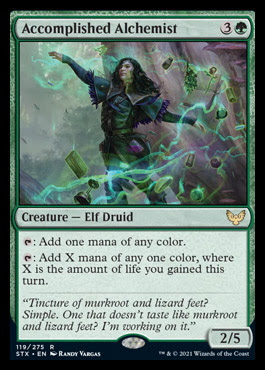 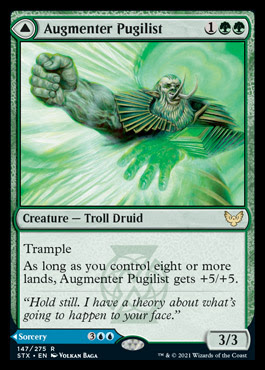 A narrow, conditional spell and a bland do nothing dork. Neither side of this card come close to appealing. Pugilist is passable in the same way that Kazundu Mammoth is fine, a dork when you want a dork is a helpful thing. Mammoth is good because lands are super useful. Pugilist hard fails because of how infrequently you would find yourself wanting Echoing Equation. 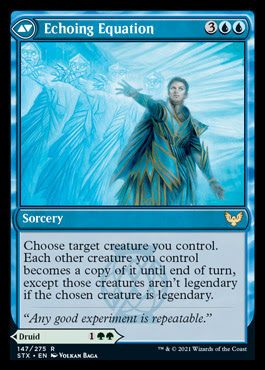 Weeeeeeeeee! This is big. A big old token maker. In EDH this is very very big. Probably bigger than everything else combined a lot of the time. Cube is about the smallest you will find this producing a token on average and it is still big. Sadly it is a do nothing token and unless you are Flinging it at people for the win I can't imagine Body isn't at all useful. 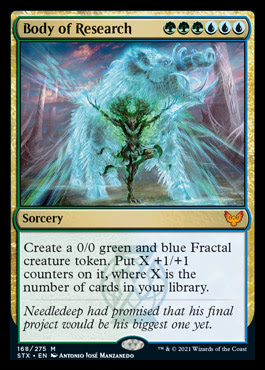 Nice clean mana rock but also too costly to get a look in with an abundance of two mana iterations. You need some pretty serious upside to get action as a 3 mana rock that just taps for one. 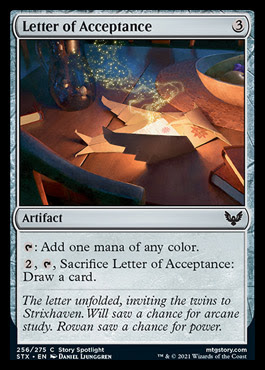 I like the design but sadly this is just far too low powered. Perhaps at 0 to equip a token and also just 2 to equip elsewhere and it would be cube worthy. Fairly bland either way. 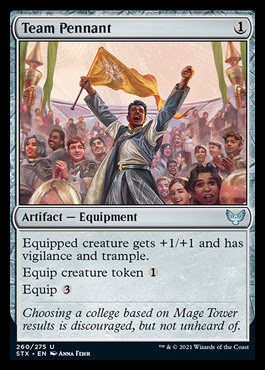 Versatile but relatively fair and unexciting while also lacking in power. 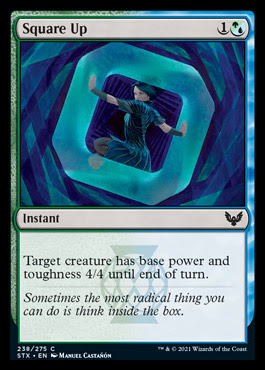 Another way of making a potentially large do nothing token. Less mana, less large, equally do nothing. 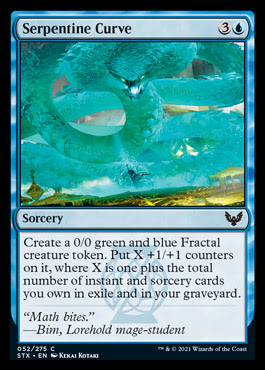