This is a removal spell I can get behind. Fracture (the other BW removal spell in Strixhaven that hits walkers on top of being a Disenchant) has 104 targets in my cube (32 Enchantments, 45 artifacts, and 59 planeswalkers) not including tokens. Many of those are not things you would waste time removing. Vanishing Verse on the other hand has 261 targets in my cube. That is over 40 more targets than Terminate has (ignoring manlands). Vanishing Verse has a range comparable to three mana sorcery speed removal yet it is two mana, instant and exile to boot. While this might not answer some of the premium threats in cube (Oko, Uro, Ugin, the best of the Teferi etc) it does tend to answer all the best early plays which is a nice place to be. Early performance counts for more than late performance in magic. I think I put this only a little behind Assassin's Trophy in cube for that reason. Trophy is obviously a much better answer with a kinder broad target range but you never want to use it early and that takes away from the utility it offers. Also, exile is pretty huge! This might well edge Anguished Unmaking out of the cube. One of the coolest and tidiest removal spells to see print in a while and we have had some really good design and progress on that front lately too. This is very clean design while remaining interesting and powerful. 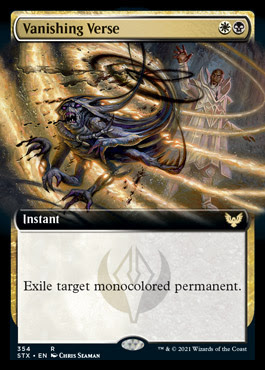 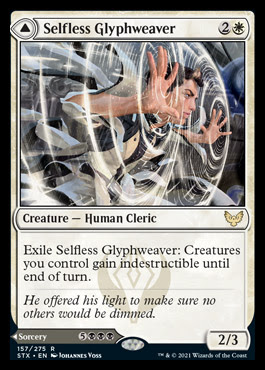 What an awkward pairing of cards. Glyphweaver is a mediocre Selfless Spirit. I might play it in white aggro decks if I had little else to help combat mass removal but I wouldn't be happy about it. Deadly Vanity is a powerful asymmetrical mess removal spell but it is 8 mana. The decks wanting Spirit are infrequently black and they never get to eight mana. The few decks than can get to 8 mana can do better than Deadly Vanity with that mana. A shoddy 2/3 dork mode doesn't do much to change that. Little cohesion between the halves and mediocre power levels on them independently. 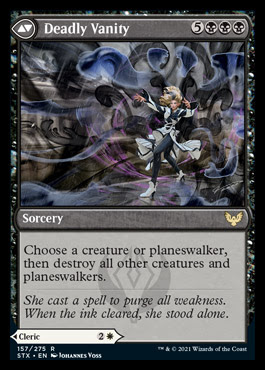 If you got like a 1/1 token when there was no target to put a counter on this might be interesting. As it is the card is just too unreliable. Without the buff there are numerous more effective hand disruption cards. 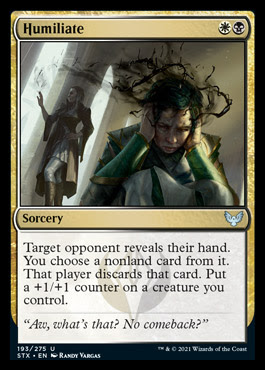 An OK body with some useful keywords. Cost reduction on buffs and removal spells is of limited use in drafting cube but could be leaned on a bit harder in constructed. Sadly not many self buff perks exist in black so I am not super confident this dude will see much play. Just a bit out of place, aimless and fair. 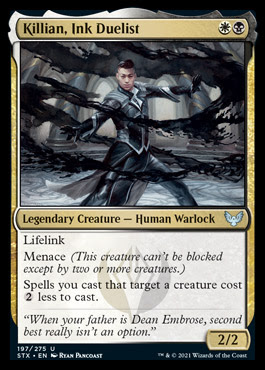 Blot out the Sky 5

Unusual card. Non-creature mass removal and token generation. The former is pricy and not all that useful. The token production however is pretty efficient. Power to cost it does a number on Lingering Souls. I suspect it is probably a little clunky, linear, and top heavy to be all that exciting in cube but the power level is there. I'll give this one a little test but with little expectation of it lasting. The much more rounded and playable Secure the Wastes sees very little play and is clinging onto a cube spot for dear life. 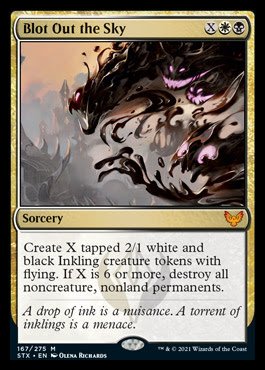 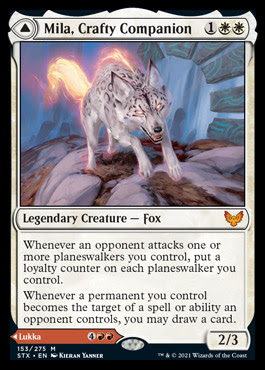 Lukka is powerful but is both pricy and linear. Really he needs support to be something you put in a list. In cubes supporting both Sneak Attack and Reanimate strategies Lukka has a little to offer but at such a high price that it is a long way from exciting. Without support Lukka is fine but far from good. Likely comparable to Koth if he were six mana... Mila on the other hand is rather more playable on her own. Mila protects your permanents from targetted things and your planeswalkers from attacks. Both of these are quite nice abilities but sadly the body is poor. Low threat, low tempo and low utility. It wouldn't take too much to make Mila exciting but a six mana red planeswalker on the backside isn't it. 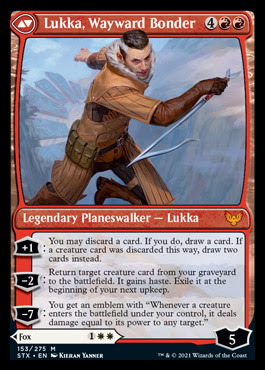 Another kind of Feather the Redeemed card. Less potent but still quite playable in the right deck. Not something you want in a list without a lot of dork buffs. Boros heroic lists essentially. 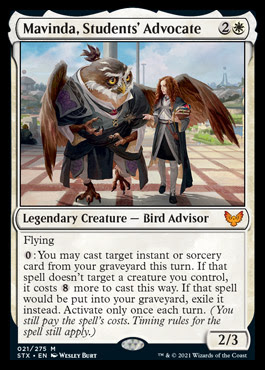 Powerful for sure but sufficiently narrow so as to keep it well in check. You really need a lot of library manipulation to make this good. Even at 50% chance of random hit (which is unrealistically high for most decks) is enough to make this land have many better alternatives. Once you have manipulation you also need to get hellbent or have a full hand. This is tricky to do in a spell heavy deck too. This double narrowness is more than enough to rule it out for draft cubes. It still has a bunch of potential homes in the more constructed end of the singleton spectrum at least. 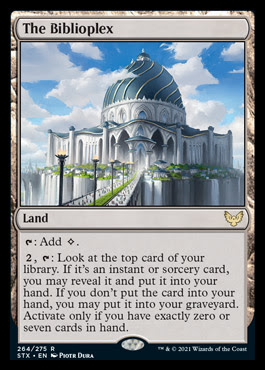 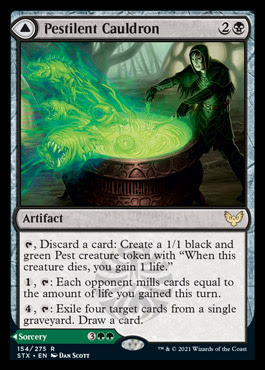 Much as I like clean design I have also always been fond of these Bow of Nylea and Trading Post everythingamajig cards. I am not saying they are inherently good or anything, I just like it when they fit into a deck, it is always so pleasing when you find those multiple overlaps that cards like these can offer. Power wise this is nothing special and sits in the same sort of pile as Bow and Post. That means that this is unlikely to see action in a draft cube setting but should find itself called upon for a selection of exotic brews. The Burst half of the card is pretty simple. It is a two for one Regrowth with some life bolted on. It is fine in the right deck. Regrowths can be pretty useful in singleton. It is slow, situational and poor tempo but it does its thing well enough to at least be playable. Cauldron does a whole lot more but is likely rather less useful in a general sense. The abilities typically need synergy or support to be exciting. The mill is only useful if you are gaining a lot of life. The discard into token mode is perhaps playable in a dredge or madness style deck but even then it is pretty slow and fair, you probably also need to want other things this card does to be playing it for the discard outlet. It is something I can see getting used a bunch as an emergency plan. Perhaps you really need to pressure a planeswalker or absorb some combat damage. At that point tossing cards away for pest tokens is probably wise. The final ability is very mana inefficient. It is at least both card draw and disruption. Mostly it is a mana sink. I look forward to finding suitable homes for this but I won't be bothering to test it in the drafting cube. 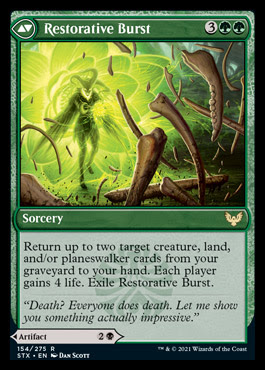 Quite an odd card. Either this is an awkward fatty or an awkward card advantage card. If you play it and sac it to itself the next turn you probably Fogged a combat, gained 2 life and got a 2 for 1 on cards. That is fine but hardly exciting. If you try and keep it around the card looks rather worse. Some decks actively want to sac dorks but those are not going to run this. As such I don't think this has much in the way of homes. 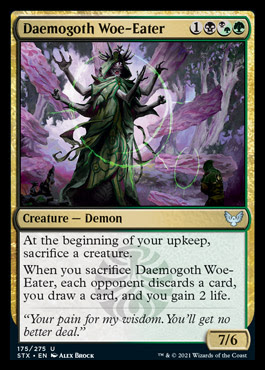 This is fine removal. It hits most targets and will kill most things as you go up the curve. Sadly it is a little unreliable and gives a little too much control to the opponent. Luckily black is well past removal that is just fine and so Flunk shouldn't really see much action in cube. Drawbacks that are known and fixed are easier to plan for and so a Doom Blade style card is going to be preferable. It gets a low rating not because it is bad, it is just too far down the list of playables doing that role to seem like it would ever be called upon. 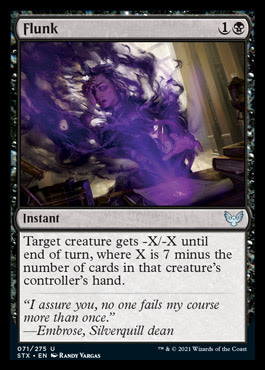