Fun card only. You can't run enough X spells outside of EDH to make this worth it. I will however certainly try to at some point because of the fun! 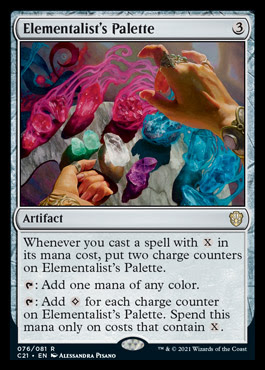 Four mana gold hard counter is a bad start but the ability certainly raises an eyebrow. This ignores timing restrictions and lets you cheat on suspend cards like Ancestral Vision. All very cool but all a little bit situational. Where you can build around this to somewhat abuse it is going to be better than Rewind. In a drafting cube it probably doesn't even clear than bar, and Rewind has never really seen much play or done much work in cubes either leaving this little hope. 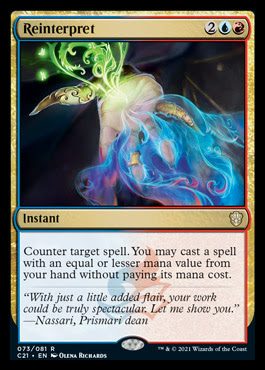 Holy hell this is overkill! Imagine just copying Fiery Confluence. Give everything +4 power and the ability to deal 6 further damage if they connect. That is just a middling card that gets a lot of play. Imagine actually getting a big serious card with this! You could get a lot done. Even so, this is far too much setup. You need a big thing in the bin, you need dorks, you need to play this etc. Not worth it even if it is potentially one of the most insanely powerful cards when it all lines up. 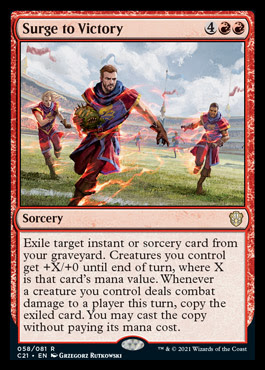 A really cool take on both a ritual and on one of those keeps coming back cards. Sadly this is ruined by relying on opponents hand size making it really unappealing to use. Ritual decks also typically have one big turn so the odds on the return of the ritual being relevant are pretty low. A very poor Lotus Bloom 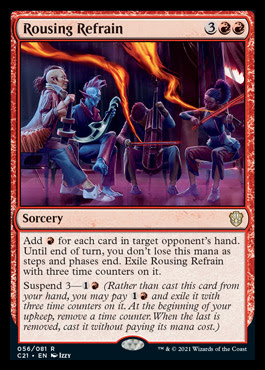 While Rionya might trigger nearly immediately like a Rabblemaster and as such usually feels like an EtB effect she is still far too much setup to really excite. Just give me a haste dragon instead of this please. 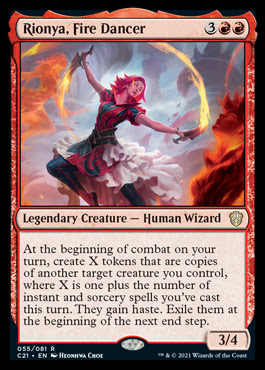 Combo card perhaps. Fun and chaotic but pricy, situational, and all a bit silly for any sort of general use. 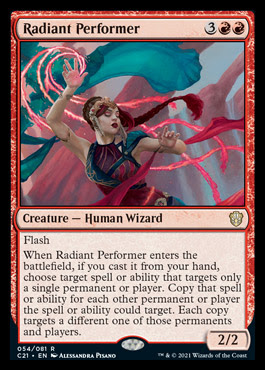 Very big potentially. It even has trample. Sadly it needs setup, costs 7 and doesn't have haste. 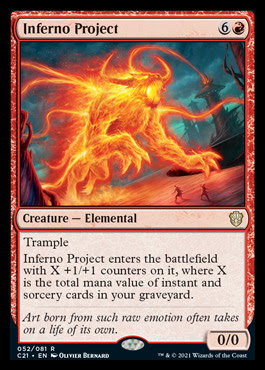 A looting storm removal spell. This can sort of be mass removal but that is pretty tough, you need high storm and plenty of high CMC cards to pitch. I might consider playing this in some narrow places but I doubt I ever actually end up doing so. 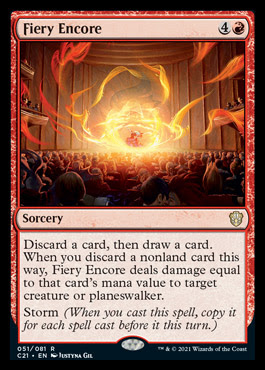 There are a few ways you can set this up fairy easily essentially thinning your deck of stuff and leaving only Eldrazi or other game winning cards. The demonstrate works super nicely on this card wildly increasing your odds on a win on resolution or reducing your needed setup time. Probably a bit too much work when you could just be playing Through the Breach etc instead. This is still quite fun. Everyone loves to cascade! 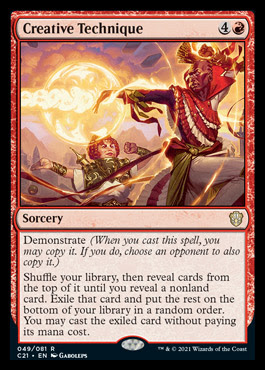 You can't play this sensibly without a lot of support. When you have enough support you probably then lack other dorks to make into 8/8s. It is still quite potent on its own but not worth all the effort of the self mill. Perhaps you can manage enough Pteramanders and Cryptic Serpents alongside Thoughtscour, Gitaxian Probe, and Chart a Course style suppot all held together with Callous Dismissal glue! Certainly an essentially hexproof 8/8 for UU is good. It is about how quickly and reliably you can actually play it. I image t4 is consistently viable but how good is your deck then? What happens when you mill your threats? I feel like self mill just has better payoffs in delve and escape and of course Thassa's Oracle. 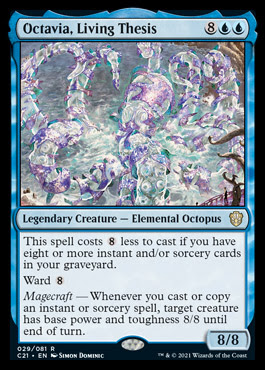 This is a bit like a blue Genesis Wave. Ideally you run this with Time Warp effects and get X in the 5-7 range such that you have a good shot of hitting and casting one. Beyond that I can't see this being playable. You need to hit really high values of X before this is close to consistent or worth the mana and being a sorcery makes that pretty rough. I like the card but it is much more on the fun side of things than the good. 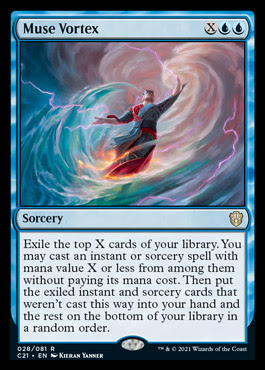 Shame this is so pricy to cast in any of the modes. You just struggle to justify taking the time to get this going. Sure, if you do it is ok in the slower matchups but might even becomes a danger late and just isn't that exciting or powerful. I think I am just always playing Ancestral Visions over this and I avoid playing that as it is. To interest me I think it needs to target a player, cost 1U to suspend and 3U to play conventionally. 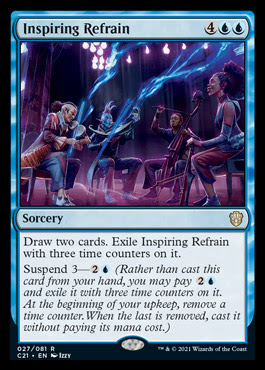 Expensive dork that needs to connect to do it's thing and has no EtB effect, no haste, and no protection to help with that. Not something we want in cubes. Far too easy to punt a game running cards like this. Sure, it is powerful but just not worth those downsides. 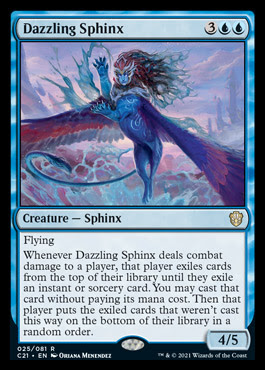 A Grey Ogre that gets two +1/+1 counters on magecraft trigger and also doubles up other magecraft like triggers you might have. The latter ability is doing little most of the time but certainly not nothing. A bonus token for a Pyromancer? An extra pump on a Swiftspear? Yes please. The first growing ability however is scary considering it is always copied. This grows big and quickly. Sprite Dragon may not get as big as quickly but it triggers from more cards, acts immediately, costs less, and has evasion. It is substantially more suitable and effective in that kind of role. I might have some fun building around Veyran but he isn't really worth it on his own, just play cheaper and better cards. Sure, he is great when you have all the payoffs but that is what the more constructed leaning formats are for. This is only good enough at a point past where it has become too narrow in a draft setting. 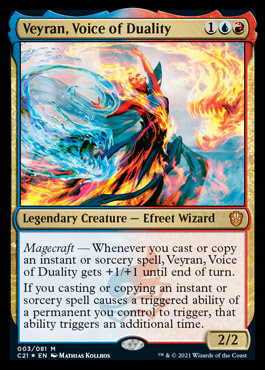