This is surprisingly interesting. It is a Wrath in colours without that ability. Exile quality too. Five mana and gold is a tall order but I think green is fine with that. This card could legitimately put Simic control into the pole position as far as control decks go. The only thing they really lack is cheap, effective mass removal and this is it. They have great potential thanks to land ramp and are one of the best places to abuse Thassa's Oracle. Oversimplify is a bad Wrath by all accounts but it is still interesting due to how much it is needed. And to a lesser extent how much green can handle a Wrath a mana above the going rate. Both colours are pretty well placed to answer a big token threat be it with chumps or bounce. This is not a good Wrath for early use where you do nothing much for the first part of the game and then just take out three or so dorks in one hit. If you do that you probably just took too much damage. It is more the kind of Wrath that you use in the mid game to answer a number of their relevant threats while only culling a few chumpy value dorks of your own. Green has always been fine at surviving early creature aggression and so doesn't need that rapid Wrath. Even if this is a card that solidifies a new archetype it is still a pretty narrow gold card of dubious power levels. You can easily be forced into using it and giving them like an 8/8 or something that they just kill you with, that would be embarrassing. 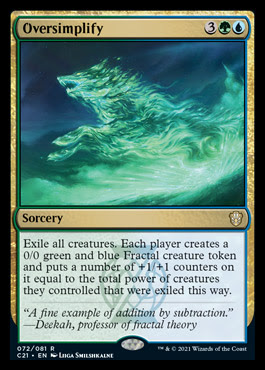 This is just a bit too mana intense for what it does. It is also demanding on there being things to exile which could consume valuable assets or just be dead. I like that it can be disruption but I don't like how unreliable it is for such a weak tempo card. 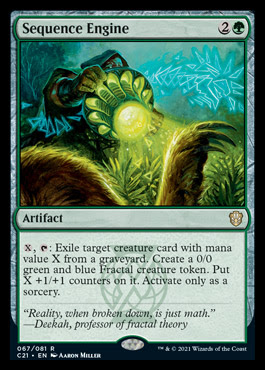 A lord for the worst kind of dorks. Pretty sure this buffs no dorks in most cubes other thank tokens. It works with cards so dull that I have no interest in even building around this... Clever to make it a bear at least as there are so few of those that you probably have to play literal Grzzly Bears in them to go tribal and once you do that Ruxa starts to look like it does something. 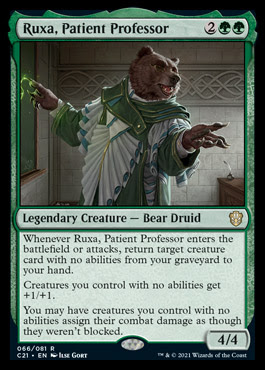 At EoT get a 2/2, then in your next EoT a 4/4, then an 8/8 and so on. The game should be over one way or another by that stage. This is a whole lot slower than the likes of Biogenic Ooze or Whisperwood Elemental but it is much harder to remove and gets out of hand a whole lot faster. Paradox Zone gives you some board presence right away too unlike a lot of the ongoing token producing enchantments. This lets you defend yourself or walkers to some extent. Zone seems comparable in power to many of the green five drop threats from walkers to dorks. Ultimately the cube chances of cards like that will be determined by how they sit in each cubes specific meta or by how much people playing and curating that cube like it. I think it is a little dull and devoid of options and would be much more inclined to run alternatives. I might also just be undervaluing the power here and despite being dull it may deserve a slot. 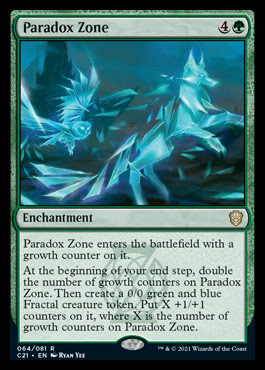 No use in formats without a commander but absolutely an EDH staple. I suspect this will be one of those Dockside Extortionist or Fierce Guardianship cards that each commander product has. Quickly a 20 of your local currency card minimum. 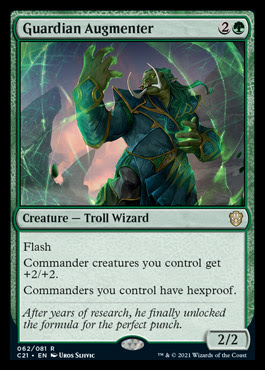 Wildly overpriced, not exciting or even very threatening. A four mana 1/1 that attacks itself into a 2/2 and then if it is somehow still alive attacks itself into a 4/4. A five mana 2/2? How about a six mana 3/3? It doesn't improve much as you go up values of X. It is also pretty reliant on a token or at least having a lot of counters in your list. This is just a very bad cube card in multiple ways. It is bad all the way to the point that it is total overkill. 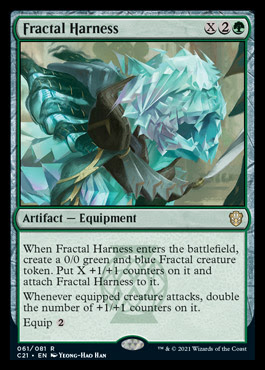 Just play Exclude? Or Remove Soul? Or really anything else. This is bad as value or tempo and also bad as disruption. No matter what you are trying to achieve with this card other things do that job better. 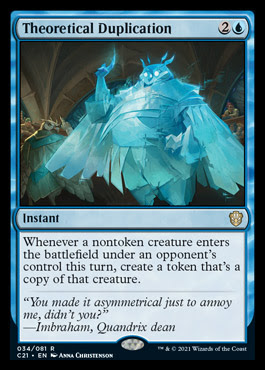 A big over priced for a build around but I do quite like the idea of using cheap changeling cards to churn out 9/9 tokens with this! Perhaps one day when there are more in the way of payoffs for these big blue types. 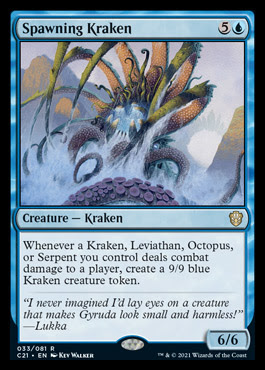 Interesting but expensive and narrow. I suspect you are mostly using cheaper cards than this if you are in the market to Clone stuff. You are not running this without strong synergies and as such, probably not at all as you just want the cheapest ways to do things when you are doing that. 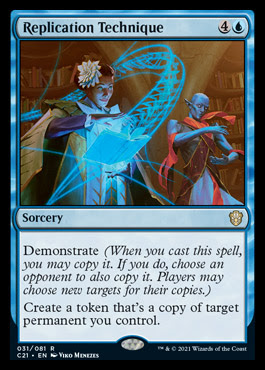 Nice but too awkward. This is mostly just worse than Evacuation as when you want a mass bounce it is because you are behind on board. In that situation you don't want to leave your opponent with stuff and this will usually force you to do so. It is far too hard to draft in a way to abuse this such that you clear their stuff and leave yourself with a board of dorks. Evacuation also doesn't get love in cubes so being less useful than it is an awkward place to be. Big cards like that want to do more than stall. It has no threat or value and so isn't wanted. I can imagine running Test in a deck that was all about the tokens but then I can't really see that deck being blue or wanting to splash for this. 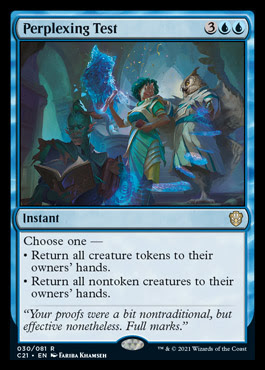 Really naughty when protected by Force of Will. Make this, make a 5/5 while wasting their turn/answer. Force of Will, untap, do anything, win. Much as this has good top end performance it is also a 5 mana 3/3 that needs supporting. Fail to trigger this and you are very behind. You just can't afford to take those risks in cube and so I can't see this getting play other than for a chuckle. 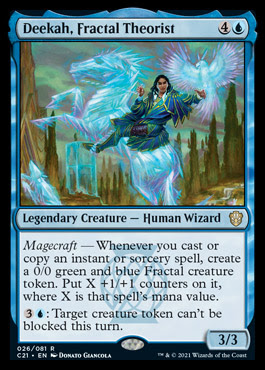 My cube is so token rich that this is nearly there. Phantom Monster isn't a terrible floor and it is not at all unreasonable to hit it with a Thopter or a Spirit or whatever. This is a solid card but cube is pretty extreme now and solid doesn't always cut it. You are looking more at floor and threat level for your cards that are 'mana value' four or more. This is primarily value. It is also that little bit too conditional which is the real killer. Certainly the kind of card I would look at in a constructed token deck at least. 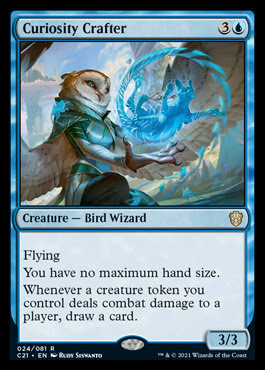 Very much an EDH card not a cube one. Sure, this does cool things but it is slow, overkill, and all a bit too much work. Just play threats that are always threats. 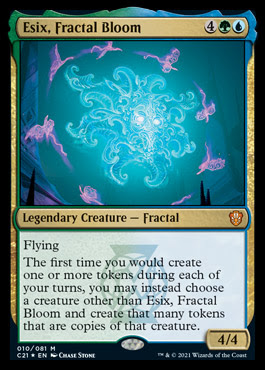