If this was just one mana to activate I would be most interested. It would then be a sidegrade on Frenzied Goblin that made it more rounded and convenient. At two mana it feels a bit expensive to make good use in cube. I suspect it will still perform OK but will just suffer a little from low power and low tempo. 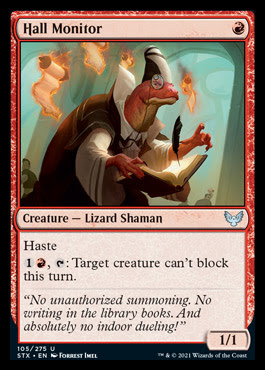 At two mana this is bad Opt. At three it is very weak Unsummon. At four it is some OK stats but just stats and on a token. At five we have finally some decent value and tempo but you can get far better deals overall from the like of any card drawing dork or any sort of interactive dork from Cavalier of Gales to Dream Eater. Is the low end utility this offers enough to offset the low overall performance? Perhaps the card type helps a little too? My gut is that had this been an instant it would have got there but as a sorcery it is just a little too clunky. You are only tapping down to Opt early if desperate, the same applies all the way to five. I will test this out but it doesn't seem like it is a desirable card even if it is fairly playable. 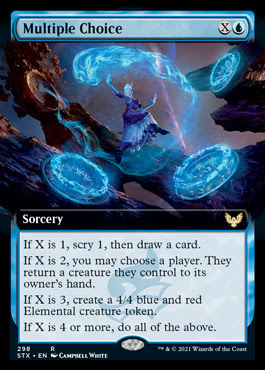 Cost reduction is nice but on four mana 2/4 dorks that needs to attack we can look elsewhere. 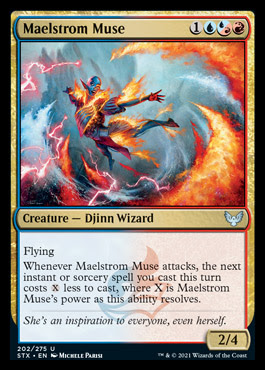 Not exactly a thrilling card but reasonable stats and devotion. Might see fringe play as such like  Frostburn Weird has in the past. Certainly much more of a blue card than a red one. 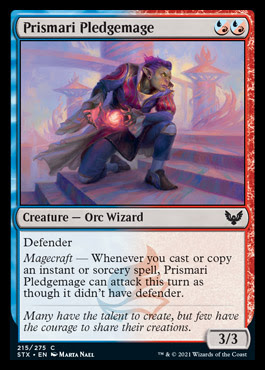 Ok, this is another cost reduction card I am happy to call unplayable in cube. A first time for everything! Narrow on what it reduces as well as being gold while also low powered fragile body. 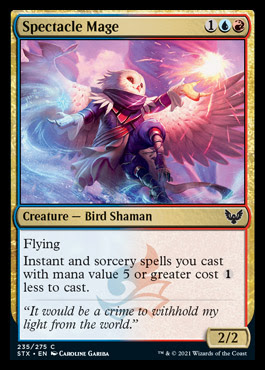 A fine enough card but too costly and gold given how comparable it is to mono coloured cards of the same ilk. 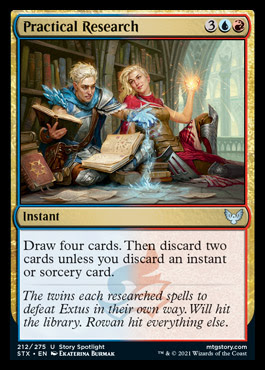 Useless other than to copy things and clunky, unreliable, and inefficient in that capacity. 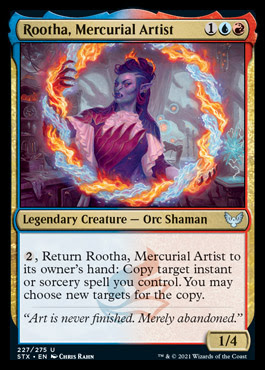 Extus is slow and narrow. He is like a poor and unreliable Meren of Clan Nel Toth. Extus alone is quite powerful but wouldn't make the cut by himself. Awaken the Blood Avatar is more interesting and probably more powerful too. The token is very odd in flavour. I feel like a 6/6 haste would have just been cleaner in design. I like my tokens simple. Eight mana for the token and an Edict is over priced. At less mana however the tempo can be pretty brutal. It all hinges on how much chaff you have to toss away. Red and black are pretty good at that. If you can bin a couple of low value things and play this for four it is savagely good. Glorybringer levels of good. The thing is, that is all getting very situational. Edict is not a good start on that front with so many token producing things out there ruining the plan. Big threats on tokens are rough too. Haste helps but still, there is a good chance you wind up doing more damage to yourself than your opponent with this. Overall this card is just far too much of a mess for cube. Blood Avatar is powerful but savagely narrow and situational while Extus just isn't exciting or powerful enough. The option on both might just have pulled this to where it needs to be but that being in three colours, despite being quite splashable, somewhat scuppers that angle too. I shall try and give this a test simply because it is such a crazy card with so much going on. Expectations are basically zero but it will still lead to some cool and powerful plays. 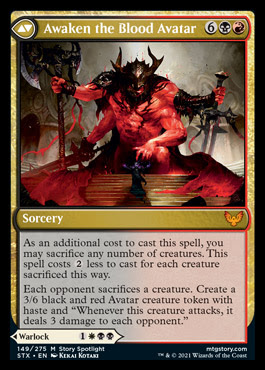 Amazing, what a lovely card. Dynamic, option rich, powerful and yet fair. Handle a threat a threat 1 for 1 at a low tempo rate or do so as a 1 for 2 with far better tempo returns. I still have Eat to Extinction in my cube as instant, exile, broad removal, that is splashable and has upside and with all that it is fine. This is quite the upgrade on Eat. Sure, you lose the yard scry but you also lose the main drawback the card has which is being pretty slow. If removal continues to get this kind of love (which is a really good thing) then Hero's Downfall is going to get cut from cubes soon and that was a benchmark premium spell and good reason to be black when it was first released. For now this is just a very easy replacement for my Eat to Extinction. 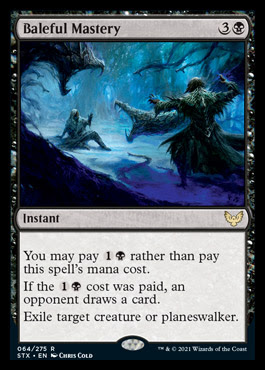 A very strong reason to now be considering white for prowess decks. This is a very very dangerous card. There feels little chance this wont get used in some legacy or modern deck to brutal effect. Steppe Lynx with much higher scaling potential is pretty much what we have here. This is no Monastery Swiftspear. Lacking the haste, the base stats, and having a slightly reduced range on actual triggers all keep it a lot less powerful in a limited setting. In a deck built to use Lumimancer however it should do a good job of outputting more damage. If you can cast an average of above one instant or sorcery a turn, which is not that tough to do at all in a deck built to do so, then this is one of the best one drops on the market. Sadly this is probably just not quite well suited enough for drafting cubes despite the potential for it elsewhere. White has far too few things to trigger it so the card basically has to be blue or red in part. While white is on the table for constructed prowess decks it still only has a couple of cards you want to run (Monastery Mentor, this, and the two drop team pump thing from this set) and that means it is rather less worth supporting in cube. All that means this very powerful card isn't presently looking like all that much of a cube card. Broad playability is just such an important consideration. 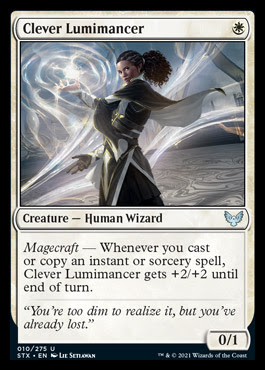 This is pretty cool looking but it is super weak. You have to go big with it and the returns are just going to be laughable. For 10 mana I want a lot more than 3 cards, 3 treasure and two face damage. Even in a deck with all blue red gold cards the returns are shoddy. Play burn spells or play draw spells, play big X spells if you must. 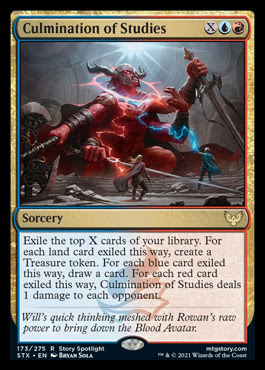 Interesting little card. Angelic Ascension has seen a bit of action in cube but is mostly used to make a token for yourself rather than as removal. Ascension makes a better body and removes generally more powerful things. I also don't expect Angelic Ascension to last despite it seeing plenty of play for the time being. I think blue isn't going to be into Resculpt. It is either bouncing or countering or stealing stuff. It isn't about killing its own stuff for tempo or conceding a pile of tempo to answer something. It is too much work to exile something and then bounce it most of the time to be worth and too punishing just to eat a 4/4 in the face. That kind of thing in white is all somehow more appealing. I will test this but I don't image I will ever find myself wanting to play this so likely won't actually get to cast it. It is at least both versatile and something a little unique in blue. 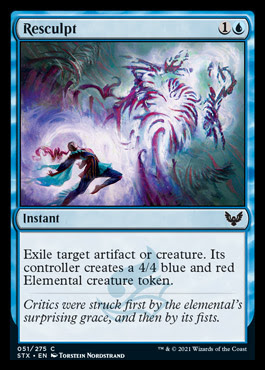 Treasure and combat tricks don't jump out as something with much overlap. Sure, mana is nice everywhere but in that case just run a cheaper combat trick. I typically like cheap cards that make treasure but I am not overly seeing where I could usefully incorporate this. 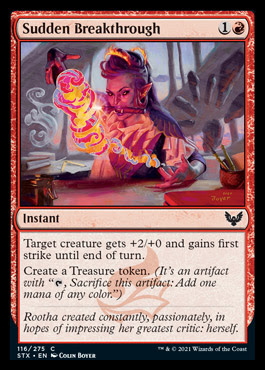 Really cool limited card! Quite a way off in power for cube use. I do just quite like this card and want to play it... 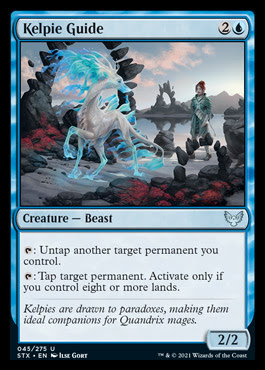 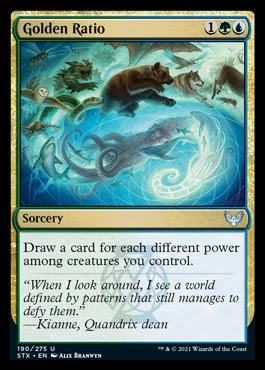