This is not a card that works well 1v1. So much so that we can safely call it unplayable. Four mana and a card to give your opponent an advantage. You pay all the costs, they get all the control. Oops. 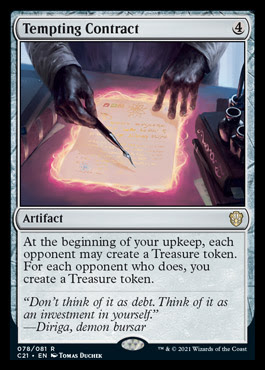 The power level on this is pretty absurd. I feel like I would almost always rather cast this than Settle the Wreckage if given the choice. Settle is obviously less mana and only one colour so there are plenty of occasions you simply couldn't play this instead. You would also expect it to be better. The thing is one is a removal spell and the other a token generation spell. The notion that something is that much more powerful that you would forgo doing what you wanted to be doing to do the powerful thing strikes me as quite extreme. This is passable when preventing two damage. It is decent at three and is just pretty savage as you go on beyond that. So often you will simply be able to untap and attack back for the win. At the very least winning the race should be dawdle. Sadly this card doesn't help protect walkers and is a situational reactive five mana gold card. Power for sure but playability is more questionable. I'll give this a little test, likely utterly wreck at least one person with it, but ultimately conclude it is too narrow to improve a drafting cube environment. A kind of Trading Post on legs. Fain might be one of those do nothing immediately cards but he has sufficient perks for that to not ruin his chances. He is a 3 drop where such problems are still manageable. He is well statted for a utility dork. And he just has an impressively high power level complete with great synergy potential, option density and all that good stuff. He just does so very much. A sac outlet, a combat trick, ramp and fixing, board development, mana sink, reset a persist trigger! Cube is the perfect environment for a card like this to shine. He is a bit too all over the shop for constructed and a bit too low impact for EDH but in cube he is just the ticket! Fain will absolutely bring us some very cool lines of play to wow the crowd. He is good but he isn't great. He is useful and convenient more than he is threatening or powerful. The kind of card that lets other cards impress. 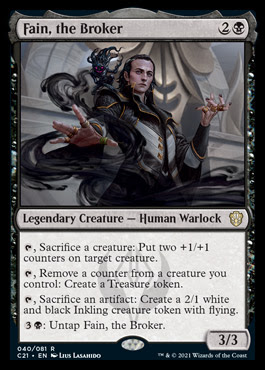 This is powerful but it is also something that is matchup dependant and something that is under the control of the opponent. Against an aggro deck they can likely just ignore this and kill you thanks to the tempo loss suffered playing Rhetoric. Against a control deck it usually does nothing beyond making the game longer. A mill five card would probably be more dangerous to them! Midrange might suffer a bit but not always. The best thing Rhetoric does is protect planeswalkers or at least compensate you for them getting attacked. While that is quite potent I want a card that is better on its own and more even across all matchups. Sometimes this will be devastating to play into but others it will be as good as blank and that is enough to kill it for cube draft. 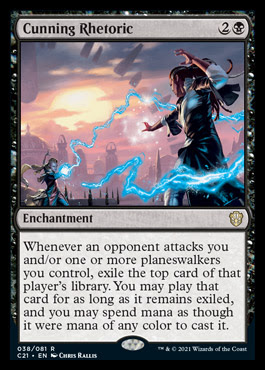 This is shockingly bad. The floor is a joke and the upside doesn't even impress when it fires. You entirely rely on opponents to stop this being bad and they mostly will not do that. Gonti but worse. This is a mana more, lacks deathtouch, lets your opponent know what you have, and might not even have any targets. Sure, it has some upsides on Gonti such as an extra power, potentially increased range as yards fill up, disruption from removing the yard, and knowing what you are going to get before committing to playing the Author. It is an OK card as a result of the upsides being somewhat less than the drawbacks when compared to Gonti. Too slow and clunky for my liking but not so bad that it isn't playable at all. 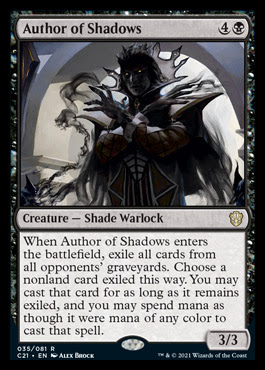 This is pretty powerful and works very well with the demonstrate. If it is good for you to have Zombify then odds on it is going to be much better for you than the opponent. As such getting double Zombify while conceding one is going to be better than just the one hit for you. Mill five is nice, it helps you play this without support. Getting two dorks is a big old swing too. A bit Tooth and Nail with a reasonable shot of winning the game on the spot. The big downside this has is that it is five mana. That is super slow and expensive for the kinds of decks trying to recur big dorks in cube. I occasionally run the likes of Living Death in such decks for their big swing potential. I can see this tempting in that kind of role but I am not sure if it will actually get any cube love. 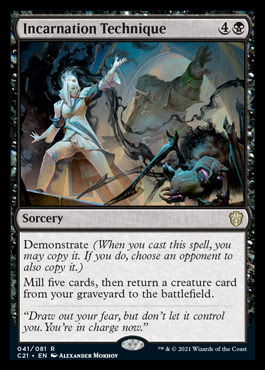 A kind of symmetrical Dark Confidant. I can see this being excellent in Death's Shadow lists where you can pack a pile of delve cards to smack your opponent for 8 or so while taking useful damage yourself and drawing cards. Symmetrical draw effects are normally a bit dodgy but at least this one gives you first action with your new cards while costing you no mana. It also is on a body and deals damage all of which pose questions and move the game away from being about the value. There are big downsides here though. This is never card advantage. You really don't want to be giving those red mages cards, especially not while doing yourself damage. You also don't want to put yourself at the mercy of your opponents top deck. They could just murder you with a Divining Top or Sylvan Library and some fairly meaty card. A Brainstorm and an Emrakul could be game over pretty easily! I like this card but it feels a bit too risky and insufficiently rewarding to go in drafting cubes. 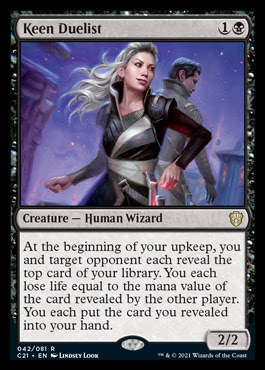 Cool effect but on too costly of a body. I want this on a card costing three or less. I might go for it on something a bit pricier than that if that was an otherwise good card too but six is a lot pricier. If this Archon looked and felt a bit more like a Baneslayer Angel for example then we might well start to take an interest. 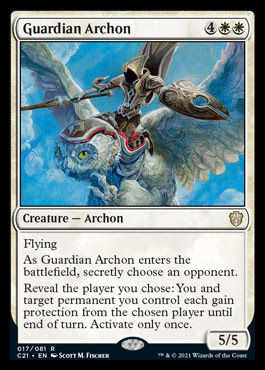 Really this is too expensive for a situational ramp card and utterly fails to challenge the likes of Knight of the White Orchid. Or even Solemn Simulacrum for that matter. There might be some combo with this and Squandered Resources or other means to get lands out of play for a big benefit. 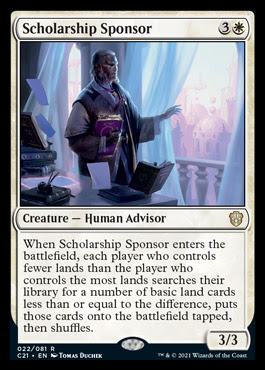 A five mana Wrath that lets you keep a dork yourself. The dork your opponent keeps is effectively Pacified but that isn't going to matter than much if it is a dangerous card with relevant abilities. This is only really brutal if your opponent only really has combat dorks and you have an actually good dork yourself. Technically the sacrifice aspect makes this good against indestructible but loads of things solve that. You don't need a dodgy five mana imperfect Wrath for that. This certainly has situations where it would be pretty optimal but I fear they are too few and far between. 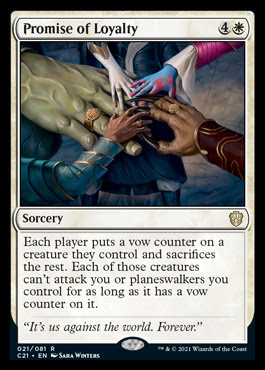 Novel card that has plenty of power but isn't very well suited to any real archetypes. Nils is at worst a 3/3 for 3 that grows a bit each turn. Not great but better than a lot of floor performances. At best he is also a kind of Moat effect too. He is pretty slow and a little dangerous when it comes to turning off opponents attacks by himself but there are a lot of counters things going on in cube and so you can be pretty sure Nils is also shutting down a bit more than an extra mana each turn. Control decks don't really want a random dork and would just play Ghostly Prison if they wanted that sort of thing. Aggro decks certainly don't want this over a more pressing and purely aggressive threat. Midrange might like this but would likely prefer a card offering value. 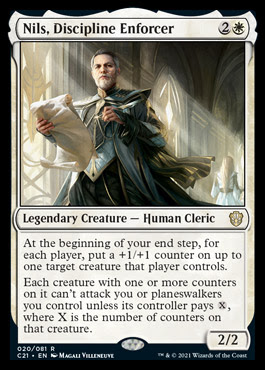 This is one of those cards that is worded for multiplayer and is a bit confusing in what it does 1v1, which is only over making tokens for you when you attack. This is not far off a white flying Rabblemaster. You need to attack but it can be with anything and it can be on the turn you make this. Assuming you manage that you get a free 2/1 flying haste each turn. That seems like it wins pretty fast. This is an Emeria Angel that is far better suited to aggro decks. They attack more than they make landfall triggers (especially from four mana onwards) and they like the pseudo haste and extra power on their tokens a whole lot. I even have a friend who will 100% at some point lose a game to the Inklings not being able to attack line on this! This should be good enough for cube but it is also a bit boring and has a lot of strong competition from planeswalkers and dorks aline. White is really really heavy on four drops so I can see this relatively linear card getting left out of a lot of cubes. Doubly so as convoluted and dull commander cards don't get tried and tested in draft, standard and so forth and so don't get to prove their worth to the wider community and so are typically overlooked. 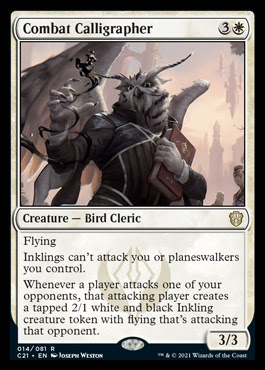 A foolishly potent means of producing tokens in terms of potential and returns. Sadly it is bolted onto a fairly mediocre 3/2 flier body for 4 and needs you to be building with counter heavy creatures. If this mentor is your only support then this has zero chance of being worth it. Decks with sac outlets don't tend to be those with lots of counters. As such this will see fringe play at best but will at least be quite punchy when suitable. Certainly a long way off a drafting card. 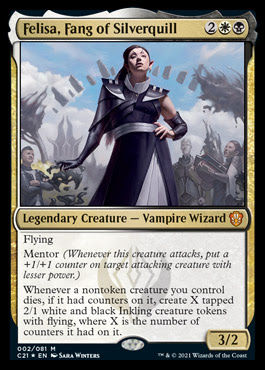