I like the design of these big spells with the ability to discard them for treasure. Opus does a whole lot of stuff but it is also 8 mana. Yes, the total value of what you get is more than 8 mana worth of things but all of them are well past the mark where those things impress. Fire / Ice is the kind of level you want this kind of card. When Prophetic Bolt is a little too steep of a cost the Opus looks really dodgy. Sure, you can use it at two mana but a single treasure for two mana and a card is not something you want to use often. I just can't see you getting to play this often enough. Mostly I see these cards as being support for build around cards like Mizzix's Mastery or perhaps Omniscience. Useful tools here and there but not things you can just play in cube draft. 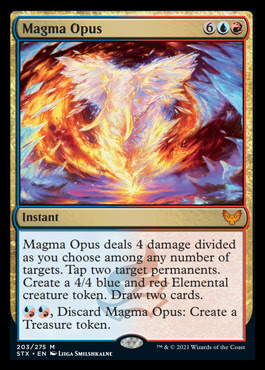 Lovely little card. This is a gold and sorcery speed Telling Time that can two for one. It is like a Sleight of Hand with a Light up the Stage. The only thing that stops this being an absolute bomb is that you cannot play it on turn two and have it be fully effective. Not without all the free spells in your deck I guess.. This is more the sort of card you want to play on turn four so you can either drop a land with it or have mana up after for doing something with. Much as I would be happy playing this in most Izzet decks it is a little bit superfluous. Neither colour is desperate for this effect. Yes, it can be more efficient than alternatives but Behold the Multiverse or just a Sleight of Hand are generally more convenient and playable. I want my gold cards to be a real pull to the colour or offer something new. This is just a bit of extra efficiency if you are willing to jump through some hoops. Power wise this is plenty for cube but it is ultimately not going to improve drafting cubes. 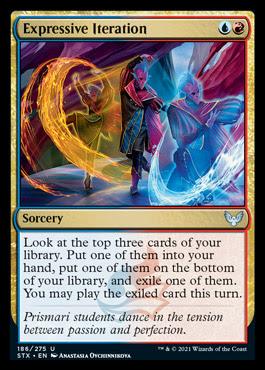 What a messy card. Power wise it is fine but a long way from exciting. Mostly just way too much messing about to be a good card. Body is fine but a long way of being a reason to play this. You probably then do yourself loads of damage holding up things or wasting things just to trigger the effect so as to feel like your card isn't rubbish. 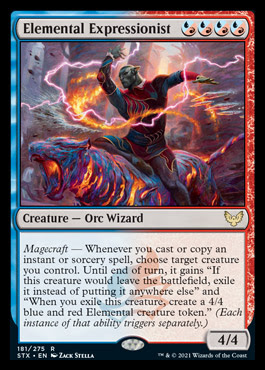 A bigger Prophetic Bolt with the option on having a treasure instead. At 7 mana this is not an efficient or well placed spell. The treasure doesn't offset that either. I can only see this being viable in decks already running Magma Opus to which this would just be a mediocre bit of redundancy. 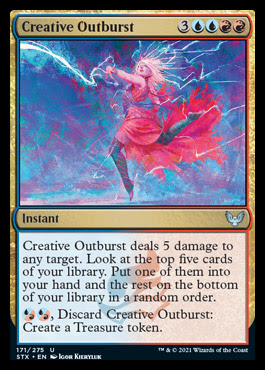 Just a Fabricate style of card. Three mana tutors that find a specific type of thing are fine. They get occasional play in combo decks that use the specific card type. Mostly things like Spellseeker, Mystical Tutor and Merchant Scroll will get action over this but not always. This is just a nice fair little tool that has a bunch of uses. That Mizzix's Mastery deck is looking better and better! 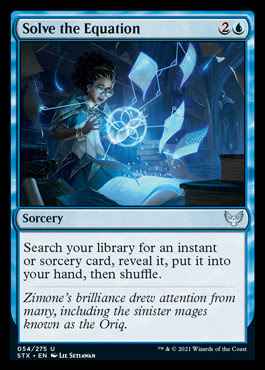 This is a lot of mana! The only chance this has is in some combo deck where you can play it for free. Then the ritual side of things might help you continue to go off in some way. Seems very unlikely to get played in such a capacity and seems unlikelier still that such a deck would be anything other than bad. 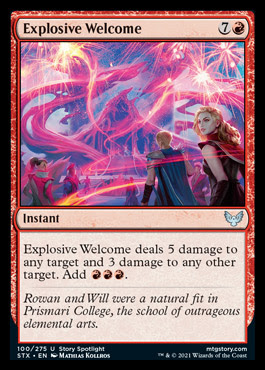 Overly situational. As pump this is mediocre and hard to do much with. As a way to make a dork it is low powered and hard to pull off. I can't think where I would want to play this but being a one drop that isn't utterly useless I cannot bring myself to give it a 0/10 rating. 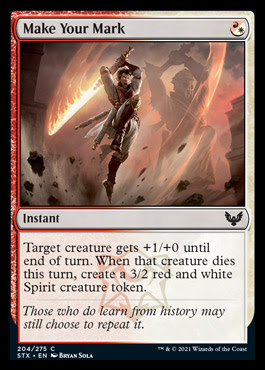 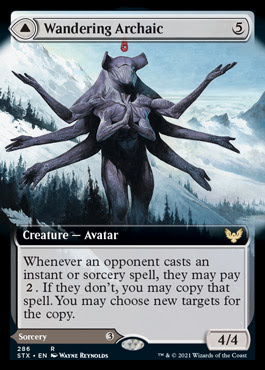 Archaic is quite cool but as a 5 mana 4/4 the card isn't very good in cube. This is the kind of effect I want on a two mana 2/2 or perhaps a three drop body that is a bit more useful. Mostly it will do nothing as it gives sufficient control to your opponent. As for Explore... it will make you popular in EDH? You can break the symmetry with relative ease as a lot of decks will miss on the instants or sorceries and not care about the lifegain. Even with those assumptions you basically just have a Silundi Vision without the MDFC aspect being useful. I can't see this in cube drafts pulling it's weight. I can see it in some places as it is such a unique card. Sadly colourless decks have some of the lowest instant and sorcery counts as that is the sort of deck that I can imagine running a card like this. 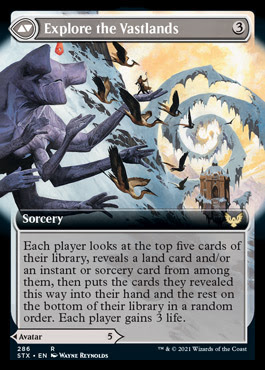 Very high potential one drop beater that is a little too narrow for general cube drafting. It is probably still too narrow even if you support flicker themes. They are typically value based where as this is tempo based. This is also harder to scale up than things like Flourishing Fox as it only triggers once a turn and only in yours. This will be good in an aggressive flicker deck but not really anywhere else. 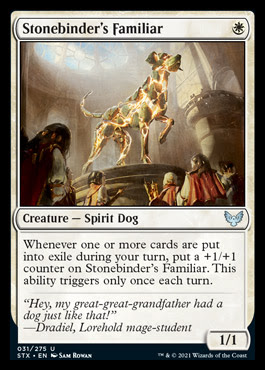 This is a very neat little card. It is a relevant body that is cheap. You can flop this out turn five in a control deck and have two mana left up for disruption. Sooner if you have other random artifcts kicking about. You can slap it in a deck with high artifact synergy/count and potentially have it generate mana the turn you make it. Probably less useful in that setting as artifact heavy decks naturally have lower instant and sorcery counts. Galazeth is no Urza but then Urza is fairly foolish! The way most Izzet decks look in my cube, from aggro all the way to control, is pretty spell heavy, and often containing more artifacts than your average cube deck. As such this has a reasonable chance. Much as it fits in quite well it is also rather on the fair side of things. Just a dork that flies and helps a little with ramp. This effectively fails the Doom Blade test. Sure, you have a treasure but you are still a mana down overall and equal on cards. In plenty of settings you may well just be better of with a Serendib Efreet. I suspect the general fairness on top of being gold will ultimately see this cut from most cubes. 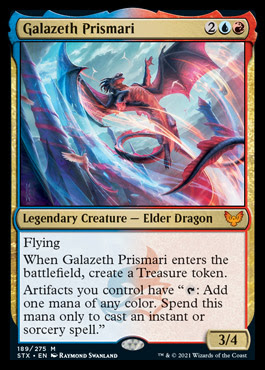 A card with two things going on. The doubling of counters on EtB and the changing of power on attack. The former is generally a bit narrow and will often do little to nothing. The latter however is rather more serious with so many Simic dorks being small utility critters. Tanazir is somewhat of an Overrun every attack. A good way to get value out of all your mana dorks and cheap cantrip dorks. Even so. This is a five gold card that needs to survive long enough to attack in order to be all that relevant. I like my cards more reliable or more immediately impactful. I certainly like them less narrow. I am pretty sure I would want God Eternal Rhonas in my cube long before Tanazir. Simic is an especially hard guild to get into in cube these days with one of the deepest and highest quality selection of gold cards. I am not even sure this would make it into a counters theme deck of 40 cards which is a little awkward for it. 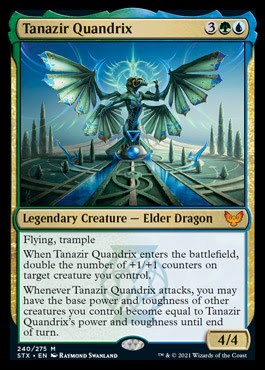