Wow, a five for one in Boros! If Kaldheim hadn't just given us Showdown of the Skalds I would be far more impressed with this. This is still efficiently enough cost card advantage when two off the mark. As a 3 for 1 it is fine, 4 for 1 it is great and a full 5 for 1 it is getting pretty filthy. It is certainly a late game card but that is generally fine. Your big refuel cards are the things you play last. There probably isn't quite enough support in my cube for this but it is pretty close. A couple more Boros flavoured Omens and Saga, a Spellbomb or so and you could absolutely have a deck that consistently cast this with 3 or more targets at a suitable point in the game. Sadly all the usual issues of being narrow and gold apply and so I can't see it lasting in cube. It does at least make me want to build a Boros control deck using some of the more interesting white and Boros interactive, disruptive, option rich tools we have recently received. I will return; Cast Out, Rip Apart, Lorehold Command, Pyrite Spellbomb, and Ajani Vengeant. Good Luck. How about Lightning Helix, Urza's Bauble, Fiery Confluence, History of Benalia, and literally any planeswalker... Five cube cards of varied types you might find in a deck together looks real good in a list together, or indeed in a hand. You can get back a Heliod and a walking Ballista with this too.. 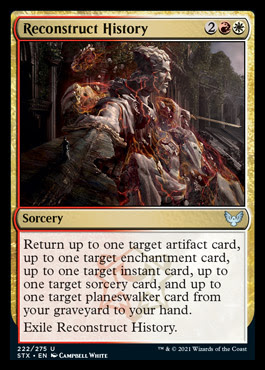 Somewhat narrow due to cost but in practice less so than Torbran or Benalish Marshal and somewhat similar in many ways. I think what keeps this out of cube is just being pretty rubbish by itself. Sure, when you are swinging away with dorks it is great. Sometimes it will still be great for some big attacks when you flop it out in a stalemate. When you pay four mana for a 2/3 that does nothing else it seems pretty appalling. Much as I have given this a below draft cube rating I think I will test this one out just to make sure. It is reasonably on theme and could prove quite punchy for the aggressive builds. 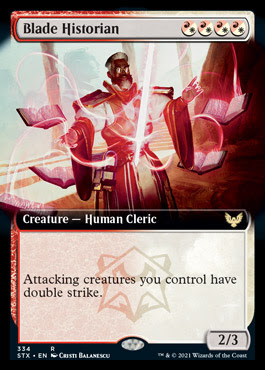 Very powerful effect but very poorly placed. Either you are playing Dreadhore Arcanist or Mizzix's Mastery. You should never land on this being the card you want for this role when building. This is four mana, effectively a 2/4, that needs to survive, and get through in combat, and have targets in the bin. So many ifs. This will kill you by being a card in your deck ten times for every useful trigger you get with it. 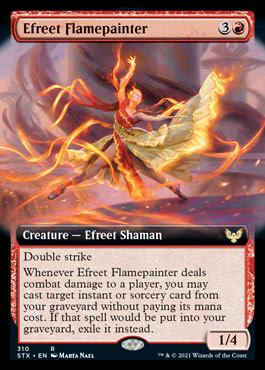 Much as we already had Hushbringer and Tocatli Honor Guard I do like this the most. Honor Guard just wasn't a relevant enough body nor did it reliably do enough damage to all archetypes to make up for that. Hushbringer did a little more on both fronts but really suffered from only having 2 toughness. It turns out I much prefer 1/3 to 1/2 plus lifelink on my passive effect fliers. Proctor is a much more useful body with flying and with reasonable toughness. More relevantly he disrupts all permanents EtBs, not just dorks. This really evens out the performance across archetypes. The dork light control decks do tend to pack a bunch of other permanents with EtB effects. Proctor isn't great in such places but equally he is a lot better than either of the other two. I also prefer the tax over direct lock approach to design. It just plays better. Much as I like this card a lot it is still ultimately a fairly low value body with a somewhat random and often minor disruptive element that has a fair amount of work to do to make up for the cost of the card. I quite want this to make it in cube but I don't think it is all that likely. Cards want to offer value, tempo, threat, or utility. This offers none of those things. Absolutely worth a test being cheap, doing a fair range of stuff, and being a rare example of a somewhat interesting white card. 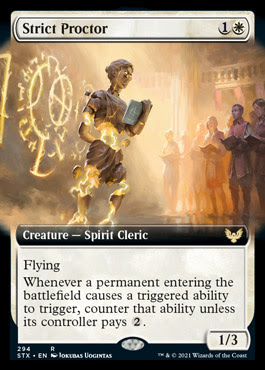 Not quite enough upside to be interesting as a top end non-face burn spell. 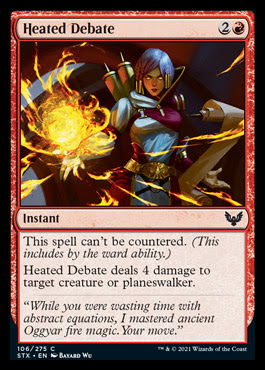 Kind of like the Lightning Helix of Cathartic Reunion. While functionally you will mostly just gain two life and have a Cathartic Reunion there are some subtle differences. The discard here is an option on resolution. This means it is far less vulnerable to countermagic but it is also rather less exciting with Fork and copy effects. Nice little support card although a bit too narrow to be a good cube inclusion. 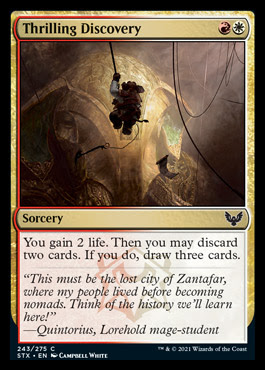 A kind of Luminous Broodmoth or Twighlight Shepherd but gold and more expensive. Sure, this has a bit more kick being a bit of a lord but still, if those cards are not big names in cube this certainly won't be. Powerful but not very appropriate. 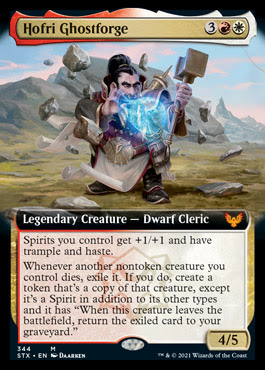 This is very interesting. Two mana Preordain to get instant speed isn't quite there for cube but it is very close. Omen of the Sea has managed to cling onto a cube slot thus far. The thing that excites me about Curate is how good graveyard synergies are at the moment. Both Mental Note and Thoughtscour are in my cube and both see a lot of play. They are Dark Rituals for delve, they provide card quality and advantage by giving recursion effects targets, or indeed providing them and the fuel thanks to the escape mechanic. Curate is somewhat of a combined Preordain and Mental Note. You get the immediate to-hand card quality of the Preordain and/or you get the yard filling prowess of the Note. I like this a lot. It isn't more powerful than Impulse as card quality but as an overall support card it might well outperform it and see more play. I am somewhat excited to play with this. You might cite the general lack of Strategic Planning and even Ransack the Lab in cubes to argue that Curate isn't cube worthy. The instant speed of Curate is pretty huge in its favour. That matters so much more in the card quality spells above one mana. The other is that Planning etc are actually a little awkward. They force your hand in some instances. To take that land you have to put your best threat into the bin etc. This is certainly a very minor downside but these things are pretty huge when it comes to cheap cards you want to streamline with. Curate is certainly going to be the low end of card quality power levels that you will find in cubes if it lasts but that is fine. It is still a good and useful card and the kind of thing I like to see. I am convincing myself that Discovery // Dispersal should go back in the cube! OK, so it is mostly about the sorcery speed, no Discovery! 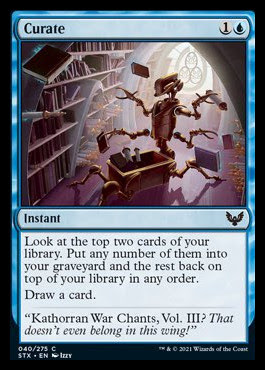 Useful little dork but not powerful enough by quite a margin. There isn't enough tempo here and there is no value. Either play a threat or play a way of getting lands. Don't play this halfway house attempt. 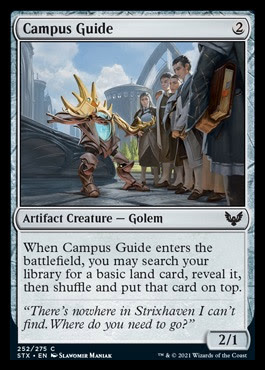 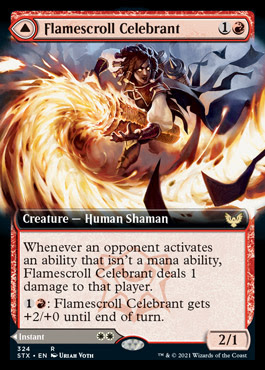 This is an odd one. Revel is quite powerful but it isn't the kind of thing you can just toss in a deck, you need to have a plan that supports it. Being on an MDFC significantly ups the value of situational cards like Silence but then you are really only looking to play it in a deck that wants the other side of the card. Celebrant is certainly much more widely playable than Silence. It is a kind of rejigged Immolation Shaman, which turned out not to be all that exciting. The punishment wasn't punishing enough, the threat of the body was minimal and the pump effect was too pricey to be all that relevant. Flamescroll is a tiny bit more threatening but ruins that by also being rather flimsier. I am not playing this card purely on the merits of either side despite one being very close to good enough and one being situationally good enough. Perhaps if Boros aggro really takes off and significantly outclasses white weenie or red deck wins then this could be worthy of a cube slot. A good but not good enough Boros card and a not quite there red card is what we have here. 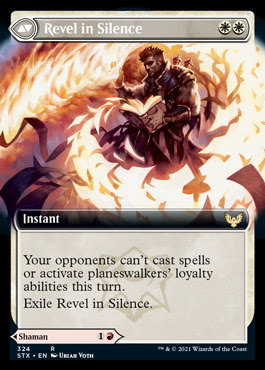 What an odd card. This gives cascade but only for instants and sorceries, and effectively a mana as well. It is far too narrow for cube. Spells this works with are typically more reactive or at least wheel spinning cards. To play this proactively you can only really use things like burn, time walks, and token producers. Removal and countermagic can easily just wiff. Codie is cute and can be impressively powerful but that isn't something you can easily engineer in cube draft. Locking you out of casting permanent cards is significant to say the least and makes building with these quite extreme. 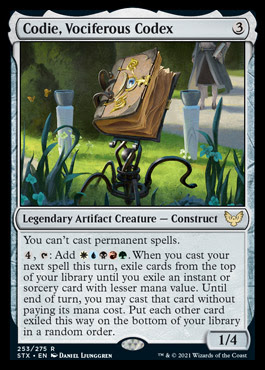