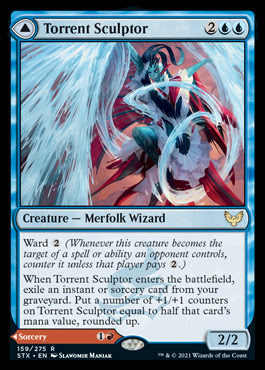 Removal that needs you to have the right thing in hand to toss away is bad. Sonata is a bad removal spell. Torrent Sculptor is just a dork. It might be a 5/5 if you are lucky. It could even be a 6/6 if you hit a big delve spell. It will still be pretty weak. This card overall is narrow, needs support, and doesn't even do a very good job of the things it does. In a deck all about the filling up of the bin and almost entirely instants and sorceries then I can see me considering Sonata as a part support, part removal tool. Don't think I would ever actively want the Sculptor in my deck even if it would occasionally get cast when playing the card for Sonata. 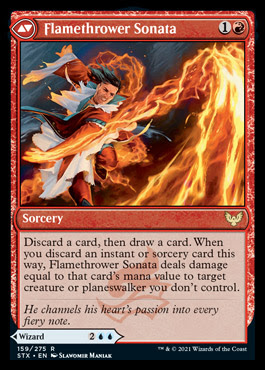 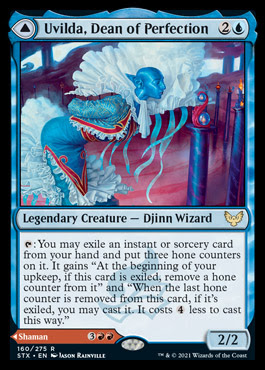 Super slow and vulnerable. Uvilda is just a bad card. I don't want Grey Ogres and Durkwood Boars. Having to tap and wait and only really getting a bit of mana out of the deal is also pretty useless. Nassari is much better but still poo. A five mana 4/4 that does nothing until my next turn and even then, pretty randomly. No thanks. Nassari isn't bad but there are many many superior five drops resulting in it never being a good choice to run. 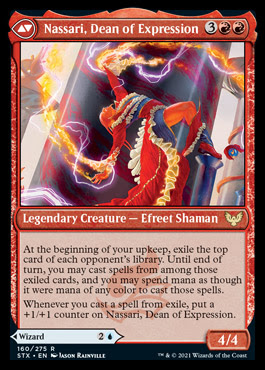 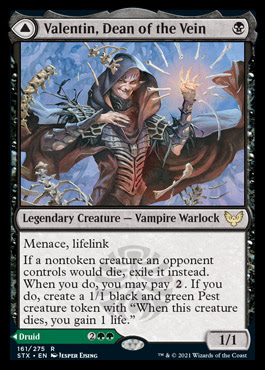 Valentin is cheap and does a lot but I am not sure it is all that exciting. The key words are cool but it is pretty low impact stuff. They don't really make the card relevant in any way. It isn't a real threat and can largely be ignored or handled with ease. The other ability comes in two parts. Making a 1/1 token on an uncommon trigger for 2 mana is not exciting or powerful. It is a mana sink more than anything else. In a deck with lots of uses for bodies the value goes up but it remains a long way from impressive. The exile aspect however is surprisingly disruptive and will get in the way of a lot of cards and effects. It is a fairly strong aspect of Kalitas. Thing with Kalitas however is that he is also relevant and good in addition to that effect which Valentin fails to be. I always like a one drop, especially an interesting one but sad to say I don't see what I would want Valentin for or where I might play him. Lisette offers more power but she requires you to have access to lifegain to impress at all. That isn't very easy to pull off in drafting cubes and so she is not going to do much in the way of carrying this card. I will at least test this, a one drop with that much text and option density cannot be easily dismissed. Can't express any optimism for it's chances though. 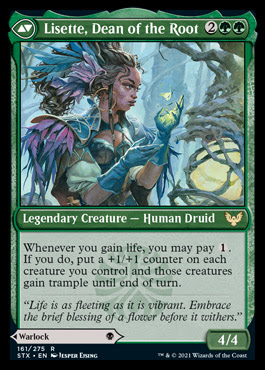 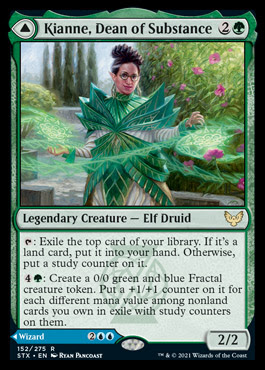 A Phantom Warrior or a Grey Ogre with some wanky tap and mana abilities. Both sides are low power, very low tempo cards with high risks and minimal upside. Lots of options but none I am all that interested in using if the cost is playing this card. 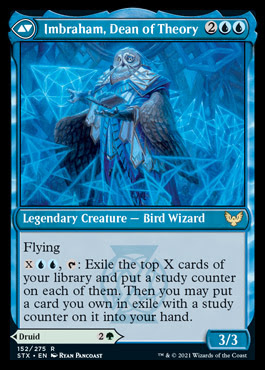 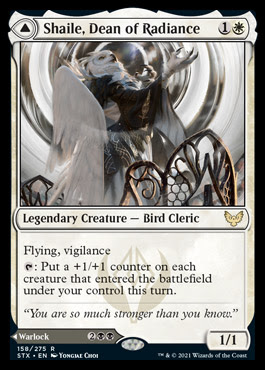 Shaile is cheap and useful. She gets to attack and buff dorks which is pretty nice. Her floor is fairly low but being a cheap evasive dork she is still suitable with all the dork buff effects white typically runs. She also has reasonable threat level just by herself. White is increasingly on the lookout for anthems that are also bodies so that it has less potentially dead cards. Shaile fits that bill well. I would be fairly happy playing her in most white aggro decks. Not a bomb but rounded and useful. A nice thing to play on turn two. Embrose is less interesting but not without uses. He is fairly big and does a couple of useful things. You wouldn't put him in a cube by himself but you absolutely might want to play him instead of a 1/1 flier and he can absolutely win games when you do. He can buff your dorks or ping down theirs. He can also draw you cards right away with the passive. Black is a fairly common splash colour for white decks and with the suitability of Shaile on top of that I expect this to be one of the more playable MDFCs from the set so far. Not a bomb by any means but at lest playable which is more than can be said for most so far. 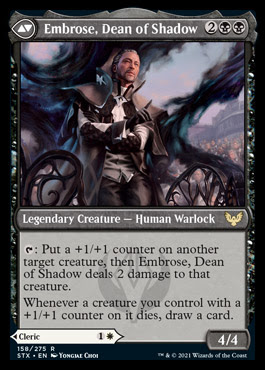 Shouldn't this be in the commander decks? It seems pretty unplayable in 1v1. I don't want to do any of those things for my opponent if I can avoid it. I might get away with the +1/+1 not actually doing anything but not something I want to be relying on. Imagine giving away a card and then just having this Swords to Plowshares. Imagine giving away two power fliers that make your planeswalkers vulnerable? Ghastly levels of risk for not all that much return. Unimpressive power levels despite the risks. In practice it is a little bit like Rankle and so despite the element of symmetry you should be able to engineer coming out ahead. Playing Shadrix precombat does allow you to get some immediate clout out of it should you wish too which lowers the risk of the card. Not as bad as I first made out but still not cube worthy. 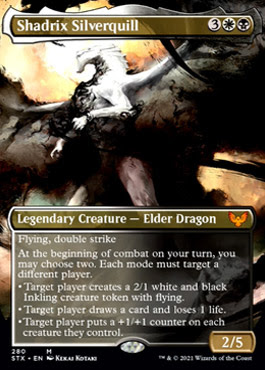 The essence of cheap card quality. This finds you action or land. Perfect. It gives you no choice beyond action or land but it assures you get one or the other. All told I place it around but a little above Sleight of Hand in power level which is a great place to be. Sleight is one of the most played cards in my cube. It is rare not to have a top rate card quality spell run in decks. This is also green which places a premium on it. Indeed this is the only green card quality spell that lets you dig for some of the non-creature action. You can't always sensibly run Oath of Nissa or even Once Upon a Time in a non-creature spell heavy Simic deck for example. This you absolutely can. The place this is biggest is likely Golgari midrange lists as card quality is either restrictive (Adventurous Impulse) or extreme (Vamp) for the most part and often not really played as a result. Unsurprisingly this card is a notch above the power level of the Strixhaven cards being a MK2 preview. Big fan of the art style used on these as well even if the boarder is a little gaudy. I would certainly like one in my cube to showcase the style. I should stress again, this card is really really good. It isn't as oppressive as Once Upon a Time was in standard but it is far more playable. There is just no green deck that isn't going to be more than happy to play this. You had to have the dork count for Once Upon a Time, you often have to spent two mana on it turning it into quite a low tempo card. Harvest is consistent and fair and is the only non-blue card that you can really compare to the likes of Serum Visions. Vampiric Tutor and Faithless Looting are both very potent card quality spells outside of blue but they both have extra costs that make them less widely playable. Oath of Nissa and Tithe are both very powerful too but both have target restrictions upon them which limit their applications and result in narrower, less playable cards. Even Brainstorm and Ponder really want you to have other library manipulation effects in order to maximize their card quality potential and take them above the likes of Preordain (the card quality spell with the highest average performance in cube). This might be one of the most exciting one drops I have ever reviewed. I love one drops. I love things that reduce screw and flood. I love cards that we don't already have loads of similar iterations of. Sure, another Birds of Paradise type of card would be lovely. Deathrite Shaman is absolutely a much more powerful card. That isn't the point. Deathrite is a little too good and can be a little tedious. A good white 2/1 for one just rarely excites me as it doesn't do very much to change the cube and the same applies to most of the one drops I add to cube. Abundant Harvest is fresh, fair, and highly desirable. In the ten years I have been doing this blog there are only a few one drops more powerful, of those most could be described as too powerful. Fewer still than those one drops more powerful than Abundant Harvest are those that are as exciting to me. A couple of red aggro dorks like Swiftspear. Then Deathrite, Looting, Gitaxian Probe are more potent cards. The cards that come close in terms of excitement would only really include Thraben Inspector and Faithless Looting. I obviously got excited about things like Oath of Nissa and Gilded Goose at the time just because they were new and interesting one drops. They are rather a notch down in playability and power compared to Harvest. 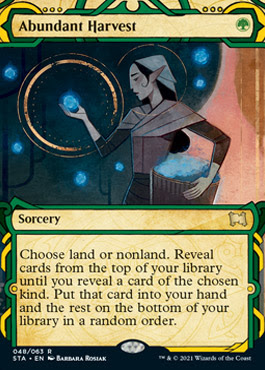