Tap to Entomb on a Hill Giant. Way too slow for combo uses and way too low in power for more general uses. I like what this does and want to see a cheaper and thus more playable version. A 1B 1/1 with the ability would be most interesting. You could even lose the counters and combo decks would still be keen. 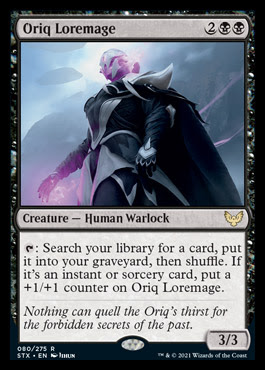 More big but awkward Golgari stuff. Really this is something you are only ever trying to abuse with something else that just wants big stats to trigger off. 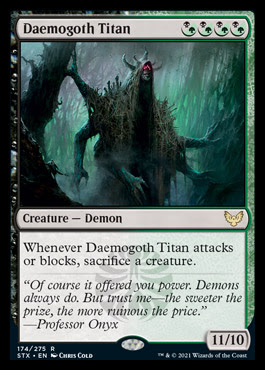 The +1 lifegain bit is nice but the card overall isn't very exciting. You just don't want the rest of what it does. White and then probably black are the lifegain colours. Green has a few bits but white does all the same stuff and more while having a lot more redundancy. That fact means that the +1 life part, while nice, isn't going to see much if any action. 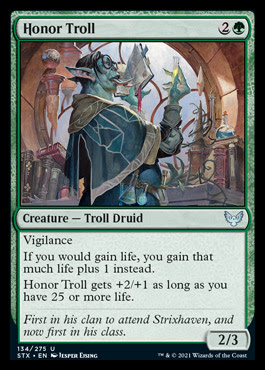 This is a cool little card. Innocent Blood plus a means to keep you up a card if you hit one of your own things. This isn't cube worthy as Edicts are too unreliable and gold removal is that much narrower. I can see me wanting to run this here and there for that multiple overlap aspect. If you have things that are good to sac, some stuff you want to return, and the means to take advantage of Edict style removal then great. This card will carry a lot of water for your list. 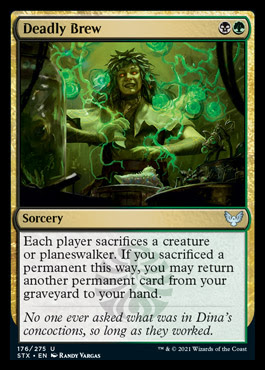 This is certainly a very big spell with an extreme effect. It is a bit full on to be a good cube card. Ways to abuse it don't want to lean on a seven mana value spell. Control decks want action and not value this far up the curve. They also want value that isn't contingent on having a nice big yard. I am not sure I can see a good home for this outside of EDH but it is sufficiently extreme that I wouldn't rule it out. Even just using it with card like Zombie Infestation or Cadaverous Bloom seems quite potent. 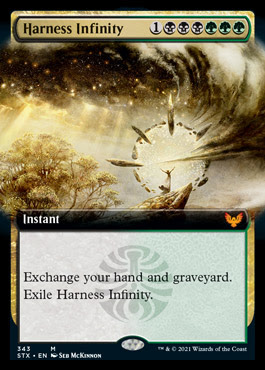 More the kind of thing green needs to become a force in the world of lifegain decks. You need a payoff that can threaten a win and this does that, just not in a very powerful or exciting way. This is just a filler card in a lifegain deck. You could play this for the sac outlet which is quite powerful but as it costs mana to use I cannot see it being a go to. 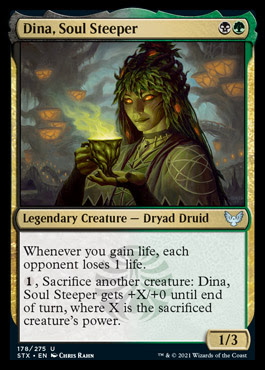 This is the kind of card black has been lacking for a while now. Rounded high powered midrange dorks. This is just one of those cards with enough lines of text on top of acceptable stats that it gets there. Menace gives it a bit of threat and combat utility and leans nicely into the go wide nature of the card. The ward 3 is a nice perk too. It ups the tempo and threat of the card and helps it to not be shoddy in the face of cheap removal. The main act is the magecraft ability which makes this a kind of meatier black Young Pyromancer. Black loves things that make tokens but usually has to go to other colours to find all that much. If this were green or white it would be a fairly uninteresting card but in black there should be a decent amount of demand for it. The power is quite high and what it offers is desired resulting in a promising little card. One pest makes this great value, more than that takes this into the top tier realms. No pests isn't the end of the world either. This has a much better floor than Young Pyromancer while being safer too. I am pretty confident that this will last in cube for quite some time and might even be enough to justify more support for Aristocrat archetypes as well as more of the many 0 mana black spells out there. 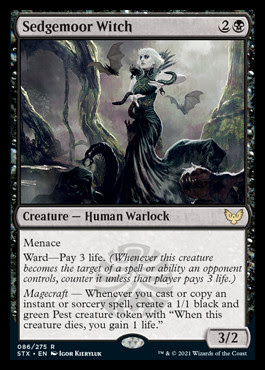 Yup, lets spoil this card directly after the Witch to handfeed you the synergy they have together. I like Plumb quite a lot even without a Sedgemoor Witch. It is a lot less powerful than Village Rites but it also has several perks over the card as well. The first and main one is that you can always just cycle this when you have no dorks to eat. Poor value but miles better than a dead card. Other perks this card offers include being a mass sacrifice effect allowing for big aristocrat payoffs or kills. The other is magecraft triggers for which this is likely one of the best in the business after the likes of Chain of Smog. It should be pretty painless making this a 2 for 1 most of the time with some random goat or a dork getting killed some other way. It is a long way off Night's Whisper as a draw card due to not consistently being a good 2 for 1 play early in the game. When you are tight on lands and need to draw into them this is a pretty brutal tempo concession. Later in the game it should start to outperform Whisper being instant and potentially going well past two cards. I imagine the average drawn with this will be near the 2.5 range which is pretty tasty. This has a pretty real shot of cube action. It is not for raw power, which it lacks compared to Village Rites, but for versatility and a more comfortable floor. 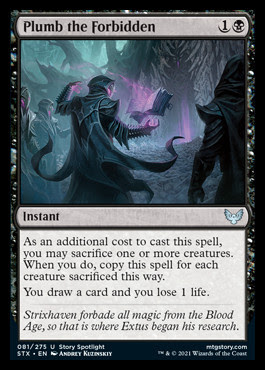 A small permanent buff or a one off protection. As a combat trick this is passable and as an answer to removal it is fine. Being both and being so cheap make it look like it has a shot. In practice black is not really that into this kind of spell. Black has hand disruption and creature removal that cover it better. Green has to lean on such as the likes of Blossoming Defence but black doesn't. Warning is very high up the list of black tricks I might play and I will test this out but I just can't picture myself putting this in a deck. 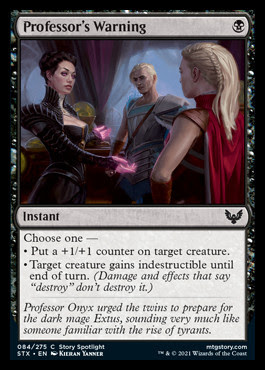 I like this a lot but in practice it is just far too slow and fair. Menace is nice but doesn't do all that much for a 1/1 dork. Three mana and a life and an exile from this to then get a card is poor value to say the least. Foulmire Knight has deathtouch which is wildly more exciting on a one drop. It didn't do quite enough to last and much as this has some minor pekrs over the Knight I don't think they make up for the deathtouch, let alone by enough to then also make this cube worthy. Having to exile this from the bin is lame too as you typically want to make use of your things in bin. That cost is either a mana or a third of a card when you account for delve and escape cards in your list. I do like that this is some free value if you mill it over but with the likes of Castle Lochthwain we now have access to far less costly means of attaining late game gas. 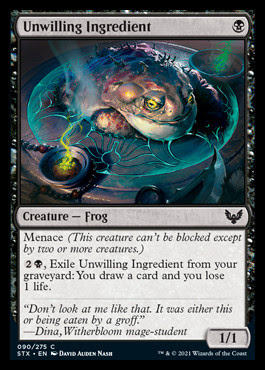 Nice little support card that could fulfil a number of different synergies but pretty niche and low power. As a source of self mill it is a bit slow and costly so not something you would want to use solely on those grounds. Certainly not powerful enough for drafting cubes. 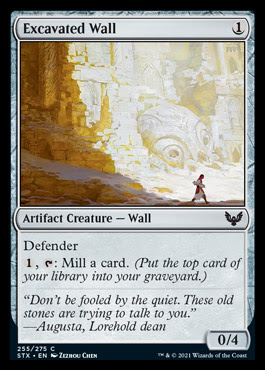 Quite the trick with a lot going on. If you can retrigger an EtB effect with this you are off to the races. That shouldn't even be that hard to do. The issue is that this is a situational combat trick in gold. Perhaps a counterspell to removal too. You can get those for half the price and half the colours and they still don't get any love. Adding bells and whistles to something you don't want to begin with isn't that enticing, especially when also made narrower. Another example of a fairly powerful card that is undesirable thanks to more streamlined or powerful iterations already in existence. We are seeing a lot of those this set. I guess the natural result of many years producing cards and having power creep. 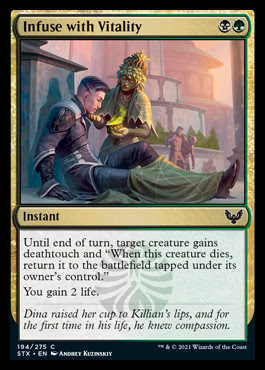 Low power and on the dull side but somehow quite desirable. This is something a number of decks quite want, especially white weenie. This is the card quality they crave and the reach they must have. Green and even some other colours would happily dabble in these. In many ways they are like a bad Smuggler's Copter. Much as these really don't impress me I am going to test them as I think they offer something in short supply that many archetypes in my cube are in the market for. Power wise this looks like it should be more of  3/10 and as such I can't see this lasting but I can also see it performing way above the power level would suggest it should. 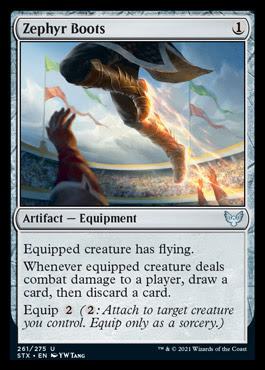 This is one of the more exciting cards in the set for me, not for raw power reasons but thanks to the broad utility and playability this card offers. Mostly this is a Phyrexian Rager missing a toughness. Sometimes this is just a road block that absorbs a bunch of damage, hopefully trades with a thing or two and gains you a whole life into the bargain. Sometimes it choses the pest mode so that you have fodder for the likes of Skullclamp, Goblin Bombardment or Yawgmoth. Every now and again it will crush a plan by answering an Uro or removing some key cards that were going to be reused somehow. Not being instant means it isn't going to be that commonly useful as graveyard hate but it is the perfect place to house that option. It makes the card quite a lot better despite not being something you will often need. Bloodmage is quite like a Knight of Autumn except it has a much nicer floor, broader proactive utility, and is mono coloured resulting in a wildly more playable card. Bloodmage is a reasonable include in almost any kind of deck. I think this is a better cube card than Sedgemoor Witch despite the Witch being a little more powerful. Black sorely needs utility and cards that are broadly playable. I want to give this an 8/10 to represent that but it feels a little extreme given the actual power of this card. 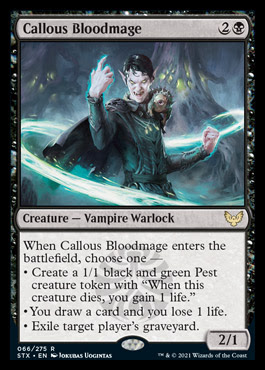 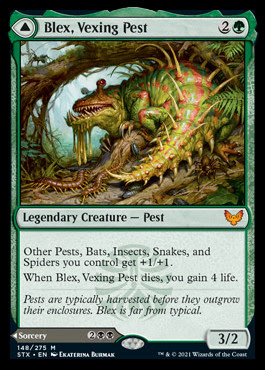 You can't sensibly build a tribal deck with Blex in draft cubes even though there are a bunch of those types out there. There isn't really enough incentive to do so in constructed types things either. A 3/2 for 3 that dies into 4 life and might give the odd token +1/+1 is pretty aimless and uninteresting. Not to mention low powered. Search for Blex is better. It is a 4 mana sorcery speed Moonlight Bargain that asks for 3 life per card taken rather than 2. You can 15 yourself with this badboy. That is nice for Death's Shadow to some extent! Being a 4 mana card it is sadly a bit late for that plan. Much as it can be a potent draw effect mostly it is way too painful to use liberally. Blex is not much of a consolation prize if you don't have life to burn. Ultimately this is narrow and situational and not very powerful. Moonlight Bargain has seen no cube action yet, I can't see this getting that much more. 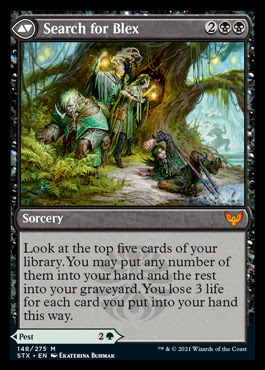