An instant speed modal card with spot and mass removal options is certainly eye opening. This is slightly worse than Murder at killing a single dork but it does at least bypass indestructible. Is the Infest on tokens enough of a boost to make up for the fairly high cost and unexciting power of spot removal? At a guess probably not despite cube being a token heavy format. Hero's Downfall is getting close to being cut from my cube and I would absolutely prefer the convenience of planeswalker removal than mass token removal. It will do nothing a lot of the time, harm you some of the time, will often fail to kill all the opposing tokens, and even when it is killing multiple tokens of theirs and nothing of yours will still frequently result in both a card and a tempo loss. Tokens rarely cost a whole card, they come off the back of other dorks or planeswalker abilities. Spending mana and a whole card to answer them should leave you behind. This feels overly situational, a bit underpowered, and hard to pull ahead with. I will still give it a test as it is unique but I am not holding out much hope. Perfectly playable but likely not optimal. 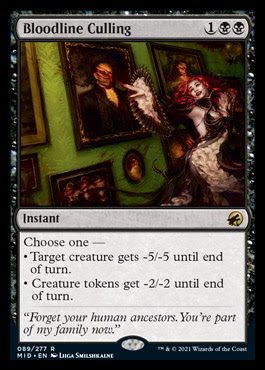 The front end has a fair amount of stuff going on but none of it really excites. Unless you need to protect the graveyard it simply doesn't seem playable. The disturbed side is of more interest but the high mana cost and low survivability is a big turn off. I prefer Bygone Bishop as a value tool and it is far too slow for cube. This being slower, more vulnerable and gold mean it has basically no hope. As soon as you do want a yard protector for some kind of synergy deck this does instantly get rather more useful. 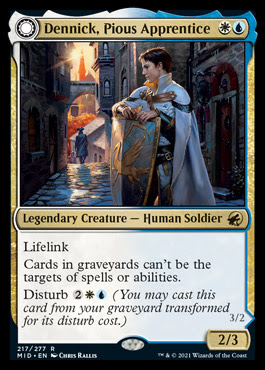 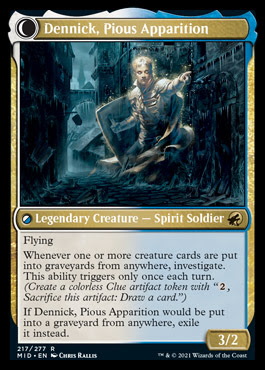 Collected Company gets a big brother. This might look similar on paper, even better in some cases, but it is a long way worse overall. Not being instant is a big deal although more for constructed use than cube. Looking at fewer cards in the deck significantly reduces the average result too but the main thing hampering this is counterintuitively the increase in CMC range. Hitting upto a five drop sounds good but it isn't. It is much the same as with high cost cascade cards, they just suck compared to the cheaper ones. You average lower value hits and you have way fewer top end hits. Storm the Festival can get you +4 mana when you hit a pair of five drops while CoCo is only +2 mana when you hit the nuts. The thing is hitting a pair of three drops is far more likely in a sensibly built deck. I suspect the average CMC of hits between this and CoCo will be pretty close thanks to this only hitting five cards and decks needing to be built with sensible curves. This might well fall into the same sort of Category as Tooth and Nail in that when you play a 40 card deck you are better off just having another big threat in your list rather than a card that can find them. The flashback is nice but at ten mana it shouldn't factor in that much to 1v1 cube play. The only thing this really has going for it over CoCo is that you can play it without having to focus your build too much. You can just slap this in most green decks without worrying too much about your creature count. There is plenty of potential in this card and I will absolutely test it thoroughly but my expectation is that I will want to play threats over this. Some combo decks might be interested in this too when it can find both pieces and they tend to be of higher cost. Not super likely as combos that want to play six mana cards are not typically the best. 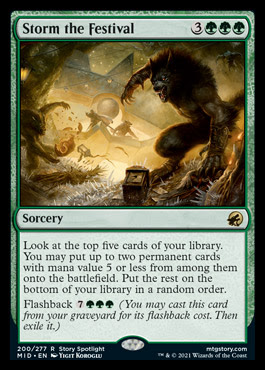 This is dripping in power yet I don't see it making it in cube for a couple of reasons. The first being the extreme number of insanely good Rakdos cards we seem to now have. There are simply too many good ones rather blocking entry for most would be newcomers. At least there are still tribal decks for Florian to shine in. The other tiny thing helping keep Florian out of the cube is that sometimes you won't be able to trigger him and then he is quite rubbish. Mostly though you will be able to trigger him and when you do you get a decent body on top of a powerful card advantage and insane card quality engine. When you get going with Florian you should steamroll most games with ease. 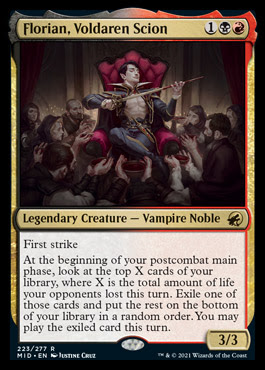 Tutors are great but this is all a bit slow to matter much. A booster draft bomb but all rather fair and narrow for cube. 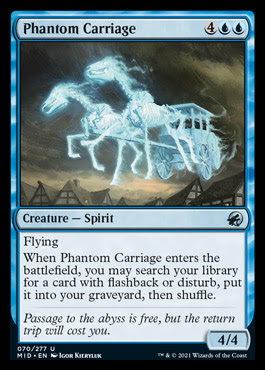 Another setup and synergy card with an amazing set of abilities utterly ruined by being on a six drop. As a two or three mana card, even with pitiful stats this card could do some impressive things in cube. On a six drop it is just rubbish as you can play cards that are powerful and win rather than just helping setting it up. 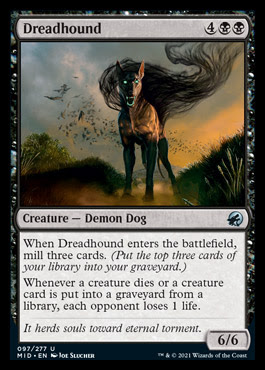 I am not even sure this would go in a tribal knight deck anymore. Not long ago a 3/3 haste was good enough. Now you can slap on a couple of extra perks and it just isn't even close. Gold doesn't help this but it still wouldn't matter, the card would remain unplayable as a 2R card. 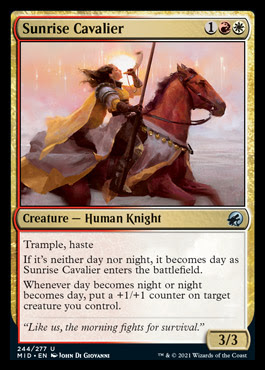 Delightful. They finally made a rounded Unsummon that appeals more than Vapor Snag. This has all the important qualities of a good dork bounce spell, it costs 1 mana, it is instant, it has no target or timing restrictions, and it can do both your dorks and their dorks. A scry is always nice and on a card this cheap it is very exciting. I can see this just bouncing a turn one mana dork or taking out a low value token just for that scry. Fading Hope gives you so much control over the game and is incredibly option dense. The power isn't all that high but in good hands it will do incredible amounts of work. It is a bit like a Peek in style although obviously one is tempo at a card cost and the other is info at a tempo cost. Even though card advantage is mattering a bit more in cube these days I expect this to see play.  The sometimes scry is enough of an upgrade for a one drop that was already pretty decent to become good. 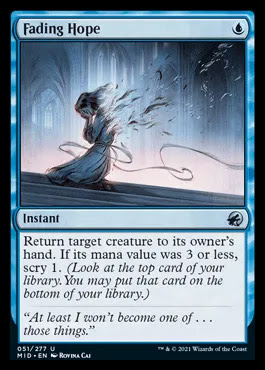 Yet more cards that are chock full of useless power. Sorcery utterly kills this dead. Extreme power and value might have carried a double narrow (gold and situational) card but a triple narrow card has no hope. 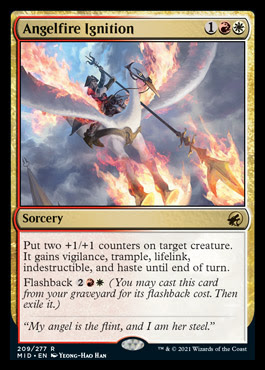 This is quite the card. A double Impulse front end (that is better than Behold the Multiverse in effect) with a seven mana Dig Through Time slapped on as a flashback. If you want card advantage and think you will have the time to make it happen there is little better than this. Insane amounts of dig and value at a very reasonable rate along with some nice synergy potentials. It is worth noting that this is not the be all and end all draw spell as it is super dodgy with Omniscience or other cheat on casting effects. When playing fair this is the business. If not, then perhaps you should look elsewhere. The cube has slowed somewhat of late and more raw draw effects are being used. This should do a decent job of brushing aside most contenders. This and Behold are absolutely my first choices for blue pure card draw spells. 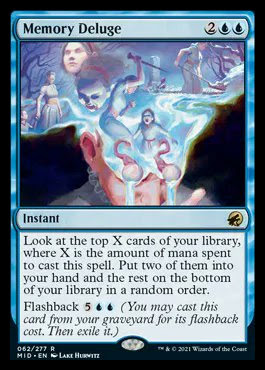 Red is getting inundated with cheap modal cards to the point where I am struggling to remember what effects are paired at what costs. This is certainly very similar to Abrade which is no bad place to be. While Shatter is a more valuable effect to slap onto a modal card Cathatic Pyre has the decency to hit planeswalkers which is significant. Loots, or rummages in this case, have loads of synergies, they are also great for digging you out of a hole. Pyre is rarely dead which cannot be said of Abrade. Perhaps due to red having so many nice convenient ways to kill artifacts now Abrade is of lower value that it once was and this is better? Seems somehow unlikely.  Outside of combo cubes this is not better than Abrade was in its prime. Abrade had a habit of undoing optimal draws for opponents be that some good cheap dork or a mana rock. This lacks that ceiling but does have a better floor. I just can't get over the fact that Abrade has two modes you want to be using and that are decent value while this has one. 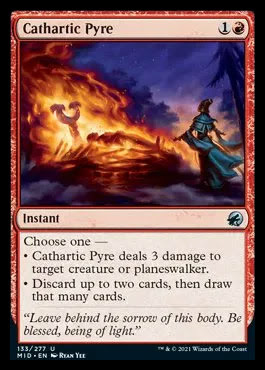