So many interesting Wraths getting printed these days. The issue here is that this is hurt when people are playing around Wraths and that is something you should expect as a player running Wraths! If people simply hold back dorks a bit then not only is this only getting a couple of kills it is also costing a mana or two more than a Wrath. The ceiling on this is obviously amazing when you can do hugely impactful double spell plays in the midgame or just utterly decimate someone who has managed to get 5 or more dorks in play by your turn three. This sort of board explosion does happen but rarely when facing down Wraths. Answer cards want to be reliable, this often means the more interesting cards like this sit on the side lines while dull old Day of Vengeance retain their slots. On average the cards are likely comparable but consistency is king and so this is unlikely to make waves in cube. Multiplayer formats however this looks very tasty. 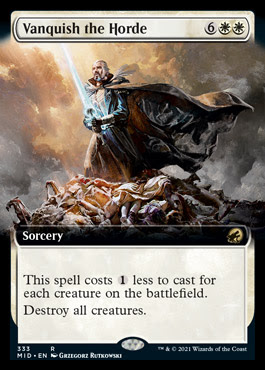 This is a lot of card with two subtle drawbacks that keep it rooted in the fair camp. Firstly the token is decayed and so offers pretty minimal value. Blue either wants a blocker or a threat, a one off two damage dork adds little to most blue strategies. A 1/1 that could block would be a lot better, a 0/2 might also still be better. The other drawback this card has is needing a target. No dorks in play means no token nor a card for you. It is going to be hard work turning this into a combat trick too meaning this is probably 2 life, perhaps 2 loyalty at best. I like this card but can't see ever playing it. Give me a Repulse over this. Give me the Hard Evidence. Perhaps even give me a Fleeting Distraction! 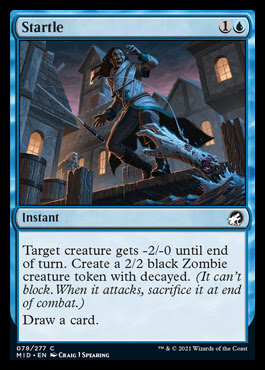 As a dork this sucks quite a lot but as a means to Buried Alive I am more interested. In decks with limited dork counts this will just get the things you want in the bin for a fairly low cost. Not quick enough to be an Entomb replacement but there are other combos and synergies that want you to put dorks in the bin. How many of those that also want to have a low dork count however is another matter. This might be narrow and somewhat low powered but it is unique and can be used as a tutor which always ups the value of cards. 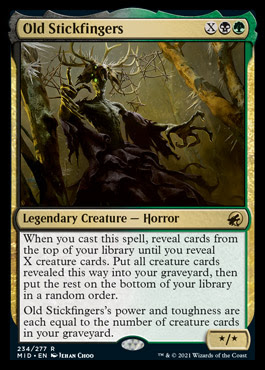 Cool card but unplayable thanks to all the bounce and exile removal rife in cube. This is quite a slow paced return of card and so doesn't really appeal in the aura decks that do exist. It seems like more of an aristocrats card but in such place the payoff is too little. 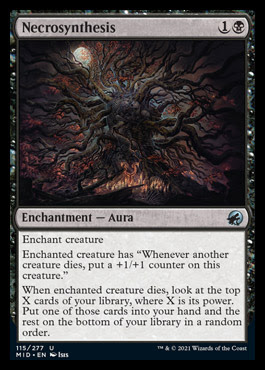 As far two drop mana dorks go this is very potent. It is a 2/2, it fixes any colour, it can double ramp on bin things (which is plenty in cube), and it can cash in for a card in the late game if you have one. While these are all good things this is just overly narrow being a gold card. Gold cards are not best suited to being core support cards, especially ramp ones. There are times this will be a premium ramper but for a drafting cube you just want the more playable and more reliable cards like Paradise Druid. 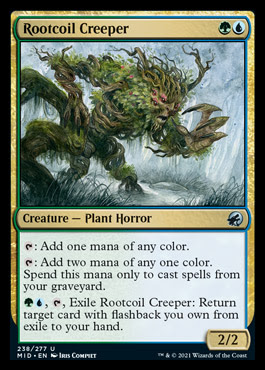 What an odd card this is. Is it a Harrow? Is it a Cleansing Wildfire? Is it some kind of Beast Within? Against decks without basic lands this is a pretty brutal land destruction spell thanks to the flashback. Beyond that I am not too impressed with the card. While it does loads of things none of them are done very well to the point that I don't want this in my deck. 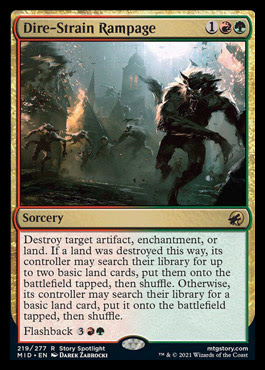 I compare a lot of cards to Brimaz and this one is the closest so far. In 1v1 play this is going to be a little better than Brimaz on the attack in an aggressive deck. On the back foot when blocking and having fewer dorks Adeline could simply be an unimpressive 1/4 which is a long way from good. Much as Brimaz was amazing he is getting a little old and tired these days. His saving grace is that he is actually fairly strong in all kinds of deck thanks to his decent defensive abilities even if the most common and obvious place for him is the aggressive decks. Adeline might be better offensively but being near unplayable outside of the aggressive decks makes her far too narrow for cube given her power level. 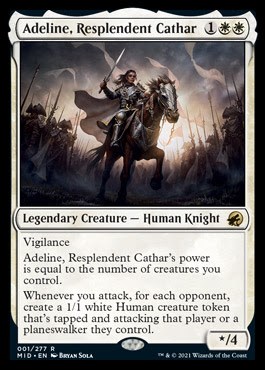 Think Twice meets Sleight of Hand and then meets Gonti! Siphon Insight is a lot of card. It is disruptive, it provides information, it provides loads of options, it provides value. The only thing it doesn't do is tempo but given how cheap and convenient it is I am OK with that. Power wise this is comfortably cube worthy. It is a gold support card which is something I am wary of. It is also an effect people do not enjoy having used on them which is noteworthy when it comes to cube design. This is good but it will need to be Expressive Iteration levels of good in testing to lock in a cube slot. Cards like this are just a bit too easy to cut and cubes are always in need of cutting these days thanks to endless releasing of really good cards. 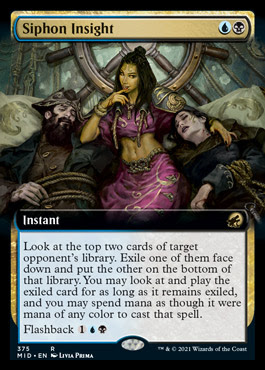 This was good enough just on the frontside. White is always after cheap value dorks to abuse with Flicker effects. This will see play in control, midrange, and even aggro decks in cube. In the former cases it is somewhat self explanatory with 2 mana draw a card dorks being a bit of a cube staple for setting up, defending walkers, and curtailing aggression. In aggressive decks this will do good work just by being a body that gets buffs, contributes to attack numbers, and that can hold equipment. The Cathar flipside turns a solid playable support card into a great one. The cost to flip is reasonable although the more the lifelink matters the harder coven will tend to be for you. Even so, it means a card that for you is disposable and has already done enough work to merit playing remains a problem your opponents must consider. 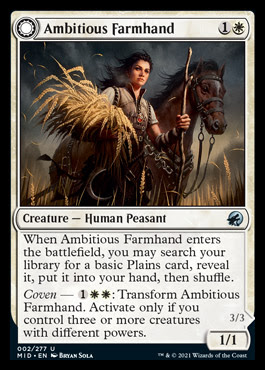 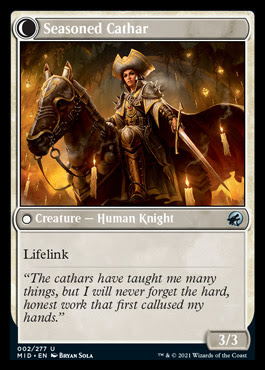 My main gripe with this card is the unclear wording on the Inn side. Is X the total number exiled and thus gets bigger or is it just always 1? I presume the former but then why are there no counters for tracking it? This seems all a bit flavour driven design wise and as such is a bit of a mess mechanically. As a threat it is slow as well as rather needy in support tools. As a sac outlet it costs too much and is too limited. The card isn't awful, it is a land at worst after all. There is just no place or role I can envisage using this in. For every idea I have I can quickly think of several other lands that would be better. I expect this to perform better than I rate it (they tend to push mythics a bit and this looks like it could be better so the fact that it isn't is suspicious) but even so that will not get it to where it would need to be for cube play. 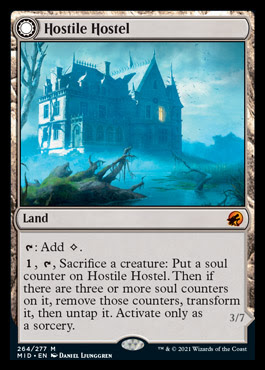 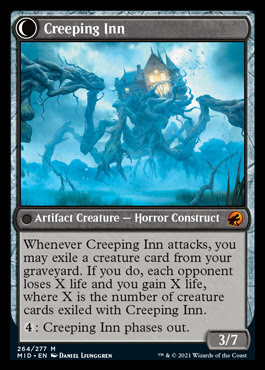 This is basically a Goblin Dark-Dwellers a bit tweaked. Five mana is very much the sweet spot for this with two being underwhelming and eight being a long way off. Is a 3/3 haste better than a 4/4 menace? It is pretty close. How much extra value is there in the various other modes on Adversary then? The logic being that Dark Dwellers are a bit clunky and narrow for most cubes and so to stand a chance this needs to better it significantly in some area. The alternate casting modes add a reasonable amount, well, the two mana one does at least. More than you might expect. So often it will allow things like lethal attacks and turning on things like Hazoret. Just being able to play what is essentially a five drop instead of doing nothing when mana screwed is a big deal as well. In practice I think this will play out quite a lot like a really limp Fury. It has a chance in cube but it isn't going to be a big deal or anything. Just a fair and flexible card that does the sort of thing you want to be doing. 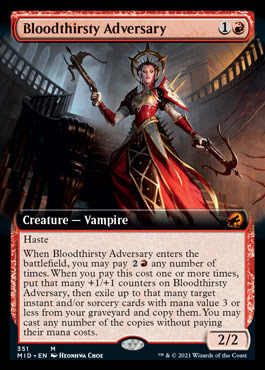