What a bitty card. The wrath mode by itself is poor, even at just XB it would be a little awkward. You want your mass removal to have CMC and toughness kill capacity equivalence. Any less and your wrath just won't save you too often. This is a pretty soft clear, it is able to clear out the small chaff early, it has to pull a fair bit ahead on mana into the late game before it could be considered a proper wrath. Perhaps it doesn't need to be though. Perhaps this is a utility clear that is more about the ongoing effect. This could be the equivalent of Overrun in an aristocrats deck acting as a sac outlet for you as well. Perhaps the life value is enough that midrange decks are into this for the overall value and flexibility. Certainly this card is packing a lot of pepper but it could well just be one of those cards that isn't quite good enough at any one thing. My guess is that if you support aristocrats this will be good enough for your cube and if not it will be a bit too narrow. Another example of a card with oodles of power but presented in a way that makes the power tame or inaccessible. 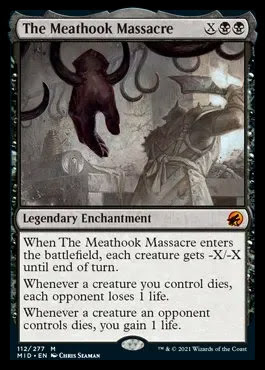 Speaking of mass removal with CMC to toughness kill capacity equivalence we have this cheeky number. Storm's Wrath has been highly impressive in cube with the cover across both main types of threat. Burn the House Down is the bigger brother, it is another Hour of Devastation when used in that mode. Devastation is a little clunky at five mana although still a fine mass removal card. The modality of Burn Down the House sends it well above Hour in appeal for cube. It is a fine control card but it a dream of a midrange card. It is even playable in some sac decks just for the power of the devils. This does 27 damage should you have a Goblin Bombardment and a Torbran in play and all three devils connect on their attack. Burn Down the House is powerful and flexible and supports enough differing builds to be pretty broadly playable, much more so than most other mass removal cards. Compared to Slash the Ranks it may lack the same effectiveness as mass removal but the added playability it has should see it getting more action. 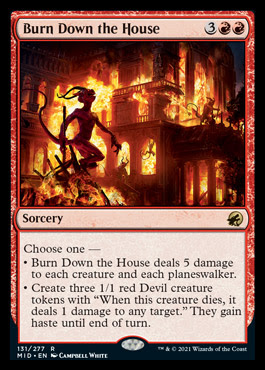 This is perfectly powerful enough but I fear it is just a little cumbersome and outclassed to get much cube action. You cannot just mill this and get it back as that skips the day/night cycle kicking off. You have to play this at which point you have invested a lot of mana in a fairly fragile card with low immediate impact. The mana and the conditional aspect of the recursion make it vastly inferior to the likes of Rekindling Phoenix, the lower toughness doesn't help there either. Rekindling recently got the chop from my cube for being too polar. It would destroy green players with ease but failed to impress at all against blue and white players who would just counter, bounce, or exile it. A card needs to be nutty good rather than just OK if it is going to have polar performance and this is only just OK. Not only does Rekindling seem like a superior all round card to this I also prefer the many three mana 2/2 haste phoenix that can recur. They have that bit more immediate utility and are better suited to that spot on the curve. 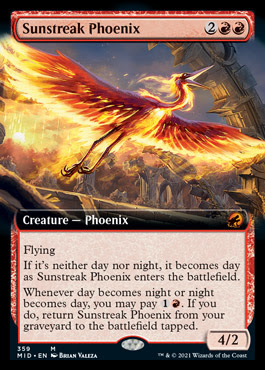 Red gets a Thing in the Ice style of card. Probably a better one all told too. Both start out very much the same with subtly different flip conditions that amount to a pretty similar speed. Egg should be easier to flip with a mere Firebolt able to do most of the work by itself! Thing is a bit easier to flip quickly but Egg is easier to flip with fewer cards. This makes Egg better in the mid and late game and a better late game draw. This covers one of the weaknesses of Thing nicely. So far we have very similar cards, what about the flip side? Immediate board impact lands firmly in the favour of Thing which puts a lot more stats into play while bouncing everything else! Ashmouth is just a 4/4 flier. It is what happens after the flip that makes me somewhat prefer the Dragon. Thing is just a lot of stats, it has no means of getting value nor evading blockers. I have not seen Thing in the Ice win a game in ages. I have seen it save a bunch of games and cause a lot of drastic responses but actually closing the deal just doesn't seem to happen any more. This Dragon has evasion and it has actual value and board control things ongoing as well. Ashmouth Dragon poses a lot more threat and reach than a vanilla 7/8 dork. It is also rather harder to play around this Egg/Dragon combo than it is for Thing in the Ice. You have an idea of how close to flipping they are with Thing most of the time and can prepare for the bounce and time your plan. With Egg the flipping can progress in much bigger chunks. In the mid to late game you need little more than a card or two and four or five mana to represent the ability to flip Egg and as such that has to be respected. All in all this card remains very close to Thing overall. The power is a touch lower but the suitability is far greater resulting in what I think will be a slightly better card. Typically they are both quite Izzet cards and are a touch on the narrow side. Overall blue is the better colour for flipping as well giving a bit of ground back to Thing and making it a little broader with some UW control build applications. While Thing was an absolute house back in the day the power creep is catching up to the point where the narrowness of the card is a concern for cube play. 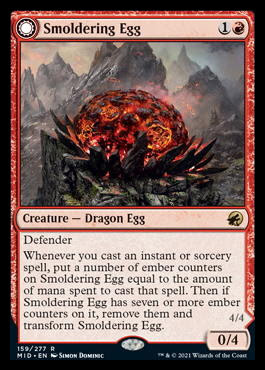 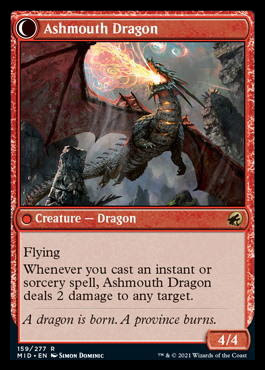 A cute little flicker that might make it into cubes heavily supporting Azorius flicker but stands little chance otherwise. Sorcery is a blow, gold is narrowing, and non-legendary rather hurts it in cube. The tap or buff give it versatility but still leaves the card being situational and not even that powerful. 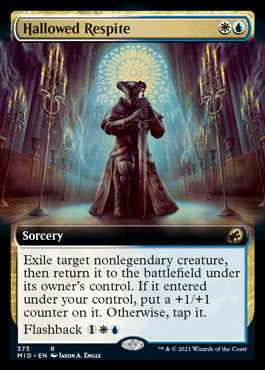 Somewhere between a Gnarlwood Dryad and a Stitcher's Supplier. There is plenty of power tied up here but as ever in Innistrad, it is fairly well obscured and hard to bring to bear. You mill slowly with this and the card flips regardless of your desire for it to do so. As such you may get little mill utility out of it which reduces the value of it as a support card. As a beater you might have to wait a little too long fir it to get powerful. If it is your only mill card and your opponent doesn't help you fill up your bin then you could be waiting over five turns for this to flip. You have to want self mill and cheap beaters for this to be generally playable. When after just one of those things this is failing to deliver too often. The ceiling on this is impressive being able to come down for one mana, attack as a 3/3 and grow in size there after. That should secure it some homes in some synergy decks but drafting cubes cannot sensibly house this. 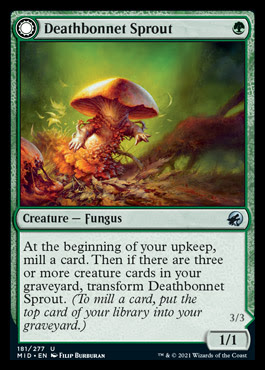 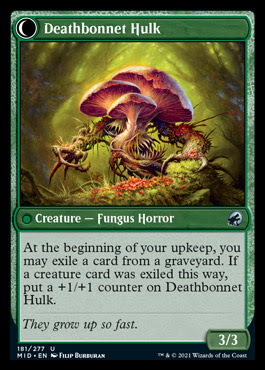 At first glance I thought this was nuts, now I am less sure. A 2/1 that can't block isn't super exciting. The opponent not wanting to kill it might mean you can sneak in for some free damage with it here and there but it isn't too exciting. It is just a bad Watcher for Tomorrow at that. The transformed bit of the card is soft weak removal that concedes so much control to your opponent and indeed the flow of the game. If Strangler dies when there are no targets then it is very poor indeed! Even if it lands perfectly and your opponent only has the 1 target plus lands they still have until your next upkeep to use their thing or find something to sacrifice so as to keep their thing. To really have much control over this you ideally need to be able to sac it at the end of their turn and even then it isn't reliable or impressive power. The advantage this has over a Hero's Downfall is that it gives you a bit of a go on a body or something to sacrifice for value and that it costs less mana. That doesn't make it better, it just makes it narrower. Ultimately I can't see this lasting in cube. It has a lot of power but it is way too fiddly and situational. 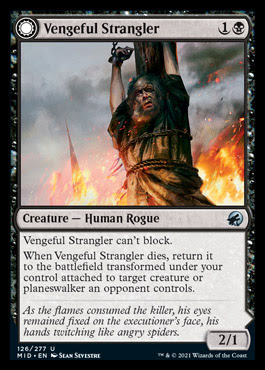 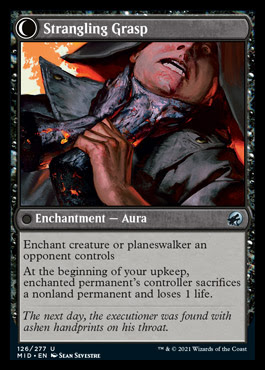 Green gets a Grave Titan, how very lucky! Power wise this is probably not quite as good as the original Titan but it is close enough not to matter. Especially as in practical terms this might well outclass Titan. Green simply has access to six mana a long time before other colours get there. Titan is good on turn six. This is a complete joke on turn four. Turn five is almost slow and turn three is very possible even in unpowered cubes. The floor of 10/10 in stats over three bodies for six mana is all sorts of good. The ceiling of flipping into a 7/7, making more tokens, and then fighting down things that annoy you with your free wolves does take it above Grave Titan in power. Flipping this is also easier than most cards as you are pretty happy not casting more once you have this in play, you shouldn't be needing more, to do so might well be an over extension. Grave Titan breaks a lot of stalemates by trading so efficiently into them and in a very big way. This will break stalemates without having to sacrifice itself. I was tempted just to give this an 8/10 because I felt that green already does muscle and big board presence in a big way and doesn't lack for that while black does. Green has Avenger of Zendikar, Boigenic Ooze, Esika's Chariot and so many more cards that all do a similar sort of thing. They are all still great cards though so I can't see that stopping Tovolar's Huntmaster performing as well or better than the infamous Grave Titan in cube. 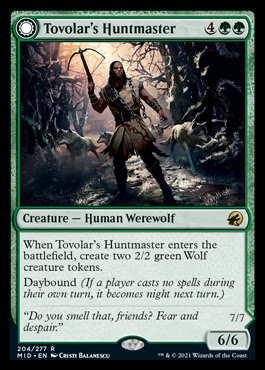 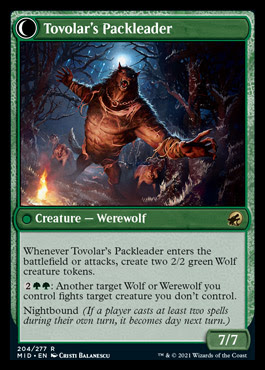