Flippy walker Arlinn returns with a new and tidied up version of the day/night transform mechanic. If you cast Arlinn while it is somehow night already she enters pre flipped which is interesting, although fairly minor as far as cube goes. Set mechanics such as this typically have such a low instance within cubes that interplay is infrequent. I do rather prefer Moon's Fury as the starting side. This would be a very impressive walker indeed if you could just chose which side it came down on. Both Moon Fury's modes are pretty high impact and good all round things you are likely to want. Sadly the Pack's Hope is more awkward as an opener. The +1 is amazing as far as helping you flip her the turn after you make her but it is terrible on the turn as you will rarely have both mana and plays left. Certainly curving with Arlinn the +1 is shocking. The -3 is very potent and reminds me of Huntsmaster of the Fells and Esika's Chariot. The issue is not the effect or the value, they are both fine to good. The issue is leaving Arlinn on 1 loyalty. A single Thopter, a Lava Dart, a stiff breeze, all end Arlinn. A lot of the time they will not even need to spend a card to kill her and you will have spent 4 mana on a pair of 2/2 dorks. Not awful but certainly not good. When they can't kill her immediately things are looking really good which increases the power of the card but not in a good way. It makes it polar and a bit of a win more card. A bit of a shame as I do quite like what is on offer here. Being gold on top of polar is a bit of a death sentence for cube cards these days with just such an abundance of choice. 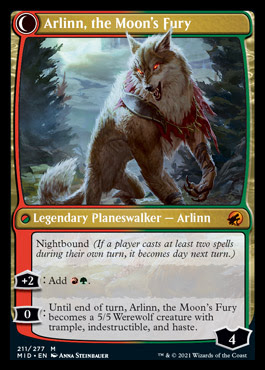 Certainly a potent card but very much in the Kalitas and Shalai, Voice of Plenty sort of camp. They are all cards that can lock down a game and cause real issues but at the cost of being vulnerable to spot removal cards thanks to high cost, no immediate value, and no inbuilt resilience either. Breaking this down, the deathtouch is the best bit here. It makes your stuff really tedious, things with trample become a nightmare, your small stuff becomes costly to block as well. The hexproof thing is nice but not overly impressive. It lets you do things like equip and enchant with some degree of security or add a bit of safety to something you really want to survive to attack with the following turn. Nice but infrequently useful, mostly Saryth would get killed first anyway and so it won't make a jot of difference in those cases. The untap utility is also nice but it isn't the kind of nice you want on a four drop dork. You might get a bit of ramp or fixing out of it but mostly you will be trying to represent the ability to protect another tapped dork you have. I do quite like this card but it isn't going to cut it in my cube. It seems more suited to EDH or perhaps other build around decks with deathtouch themes. 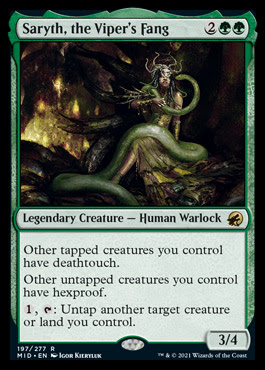 A rejigged Kiln Fiend that results in a more generally playable but less build around suited card. Essentially this is a bit more robust but grows a little less extremely. Still enough of a boost to be something you would want in any sort of Kiln Fiend deck. It does very much seem like the 2nd best Kiln Fiend for that sort of combo. A little bit narrow, cute, and likely fair, for most draft cubes however. 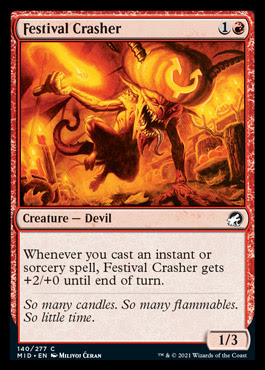 A very cool Fork effect indeed but still not quite good enough for cube play. The power is there for sure but this seems too narrow. You need to be in the colours and you need to have the cheap spell still in hand to fork. Mostly that is burn and card quality which you are typically casting early. Situational cards are hard to justify in lists, this one is generally a value tool too which makes it less appealing. I am much happier making concession for tempo gains than I am for value. Despite not being a draft cube card this Fork will have plenty of homes, notably combo ones, where being able to have a functional Fork working from the bin will be impressive utility. 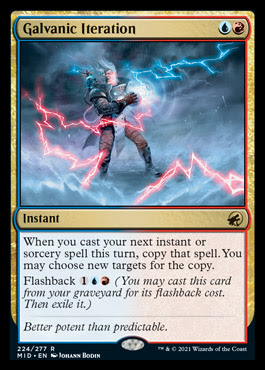 We could deep dive into the value of the various effects this has and how it will be able to win a bunch of games on it's own. Or we could just look at the metrics for paying 5 mana for a 3 toughness dork with no EtB effects or protection which make it pretty unplayable. This is another wildly polar card that will tend to cost you the game when you spend five sorcery speed mana to do nothing or just occasionally win you the game against opponents with the wrong answers. Not interesting nor fun. Luckily also just not that powerful on average. 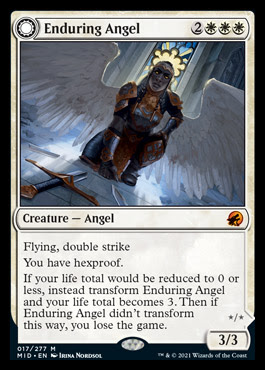 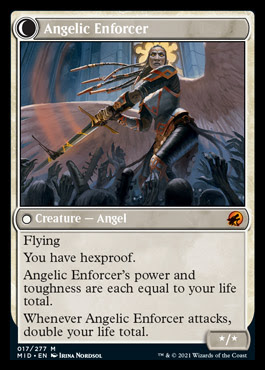 Far too slow and vanilla for drafting cube play but a bit of hope in a counters theme deck where by this is a doubly synergy payoff having and giving counters. The coven is also easier to trigger in such places where you have a greater degree of control over the power of your dorks. Cute though this might be it is still low tempo and situational which hurt it even in the synergy lists. 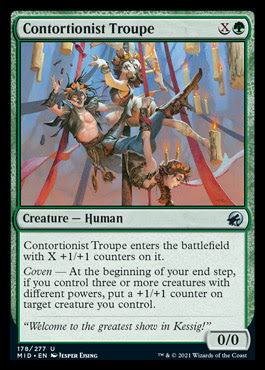 This is like a Wall of Omens that draws when it dies rather than on EtB and that instead of a card from your deck it always draws a six mana Serra Angel. In other words it is like a very bad Wall of Omens. You only want the disturb part when you have nothing else going on and so the early bit loses most of its appeal. 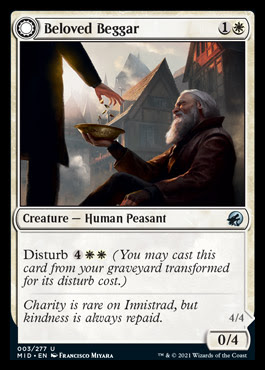 Most interesting. The inverse of the quick lands although both landing good on three. Is it more important to have untapped lands from 4 mana onwards or on turns one and two? The answer is both archetype and format dependant. Broadly speaking the slower your format or deck the more the slow lands will shine over the quick lands. Even in my unpowered cube I expect quick lands to outclass these although not by loads. The sweet spot is around the 3 mana mark. The quick lands are weaker in my cube than they are in modern by quite a significant margin. I tend to prefer running pain lands to the quick lands although again, the specific contexts are important to these kinds of choice. A more appropriate comparison to these slow lands are the check lands. Both fail to produce mana immediately when played early and both are increasingly reliable as the game goes on. While I suspect on average a check land is coming in untapped more often than these that isn't painting the whole picture. You often can't sensibly play a check land as you have too few basic lands. Check lands are weaker when you are more than two colours while also being weaker in rotisserie settings where you pick up far more dual lands. If you were able to account for the times that check lands are not played into your averages for when these lands come in untapped the slow lands would start to win out. They are simply more reliable and convenient. There is generally enough good fixing for cubes now that these shouldn't see all that much love in drafting cubes outside of the very large and potentially budget ones depending on how much these wind up being worth. That does not stop them from being excellent little cards. 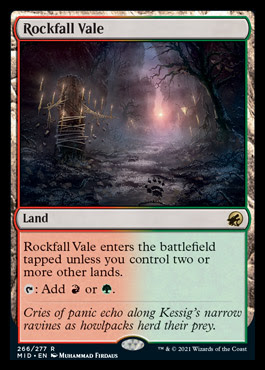 This seems amazing for cube to me. Mostly it is the high levels of synergy this has but it is also quite acceptable as a stand alone. This sits somewhere between Kari Zev and Ophiomancer. Jadar is fine if you want to just attrition at someone with a disposable 2/2 attack every turn. Jadar is nuts if you want to sacrifice dorks for value. It is certainly less good offensively than Kari Zev as Jadar is more vulnerable and far less able to tangle himself. On the plus side you don't need to send in with him to get your dork as you do with Kari. Jadar is still 3 power over two bodies for a mere two mana which is just plain old good. Equally, it is less good defensively than Ophiomancer quite significantly what with the token neither having deathtouch nor able to block. Like I say, it is all about that synergy. So many cards play off dorks in one way or another, especially black ones. Jadar will provide a lot of fuel for a lot of abilities. Low cost, high power, and high suitability all add up to a very desirable cube tool. 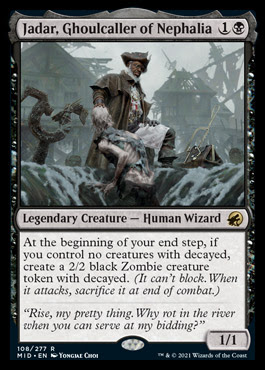