The power level here is OK but not exciting. The card has flexibility which is likely the main selling point which doesn't bode too well. There are some bigger issues with this card though. Mostly, when is it good? I am a long way from excited about a 4/3 with trample for 3. At six mana I get a 5/4 and a 3/3 for a land that I can attack with or five mana if I don't attack right away. For seven mana I can get a 6/5 trampler with a pair of tapped 3/3 lands. Eight or nine mana lets those lands be untapped and attack ready. This is OK for stats  for the mana and spread of bodies but it isn't great or anything, loads of cards outclass that rate of numbers and/or bodies. It can be decent against spot removal, especially with land being hard to hit with a lot of it but Adversary is horrendous against mass removal. The lack of good combat abilities or survivability all rather undermine the average things this card does. You can only get value from this if you have excess lands and they then trade favourable into your oppoents dorks and removal which is all rather wishful. Flexibility is the best thing this does but unless you provide something that is wanted being flexible about how you offer it matters not. 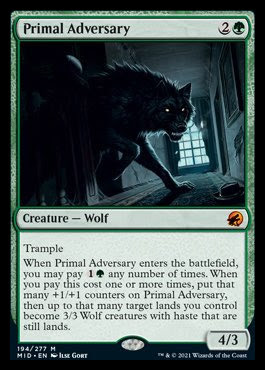 Declaration in Stone got a much needed updating. The ability to hit walkers and be cast at instant speed makes this a pretty perfect all round removal card. This doesn't Maelstrom Pulse down all the same token types nor does it exile but those are rather minor things compared to instant speed and hitting walkers. Fateful Absence is just really broad, really reliable, delightfully cheap removal. It is a better tempo removal spell than most others out there. It will be good in control and midrange but it will be outstanding in aggro lists. 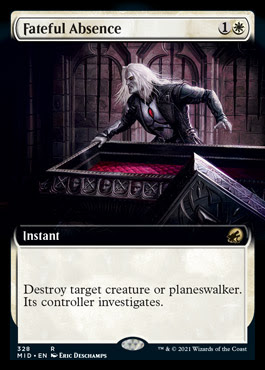 This dude does quite a lot but it is all a bit clunky and slow. A kind of cheap and vulnerable Glen Elandra Archmage. I am not sure that being a 2/1 helps this much as it is hard to do much with and very easy to kill. An enchantment feels better and then the mana costs make it seem terrible. Does having a Wind Drake flashback mode help? Yes, certainly but perhaps not by enough. When the uncounterable ability is useful the card is great but when it isn't and you just have a Wind Drake the card fails to impress. This card is very strong against control decks but seemingly quite a bit weaker in most other settings thanks to low tempo. I will certainly give this a good test but I am not expecting big things. 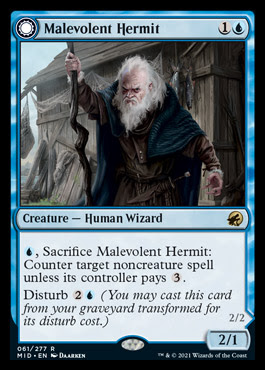 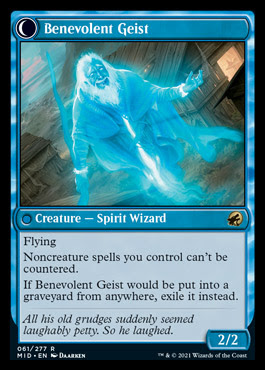 Certainly Ormendahl is very potent and should win most games. Lots of threat, hard to race, and usually able to secure value even when facing premium removal. The issue is not with the demon, it is with the front end and getting from there to the demon side. Having 13 life and 6 mana is not all that easy to setup, even with some lifelink dorks. Indeed, paying 9 total mana to get Ormendahl out rather detracts from his appeal. Jerren is mostly a 2/3 and a 1/1 with some expensive lifelink and some mild tribal token production. With lots of humans this is good. With few it is not. Jerren feels like a bad Pia Nalaar. Overall being a couple of bodies, a smattering of utility, and an acceptable stat total Jerren is at least playable. I suspect however it never quite makes it to good nor indeed flips to Ormendahl productively. I'll give this a test but expect to cut it eventually without ever flipping it properly. 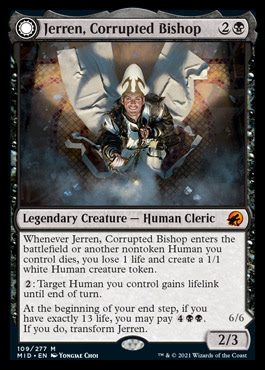 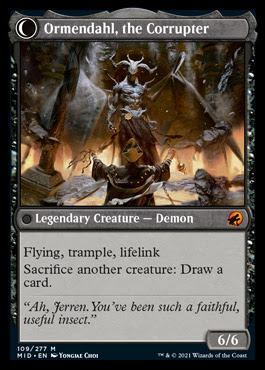 Much as I love a cheap looter this is too unpredictable for it to do what you want. 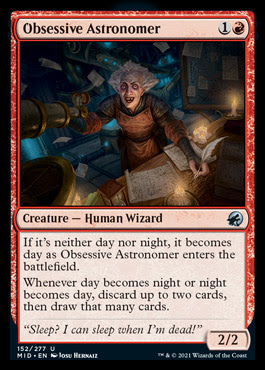 Gold narrow, sorcery narrow, targets needed situational and narrow. A big old no for this toy. 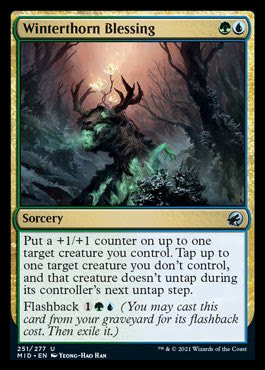 Lord of the Forsaken 3

A threatening body but one that is vulnerable to removal without returning value. Really this looks like a great support tool that is ruined by being a powerful demon with a CMC to match. I can still imagine abusing the life to mana mode, lots of fun with a Yawgmoth's Will! Sac outlets and mill are all good utility too. This seems like a treat for EDH but it is just too high up the curve for what you want to do with it in heads up play. 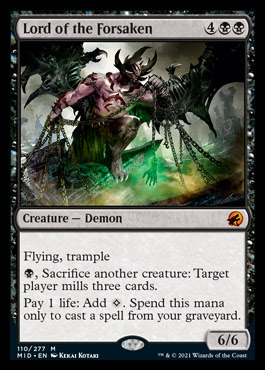 Tapping at the Window 4

Not enough range in target types nor enough dig into the library to be good card quality. Most of the time this is hitting exactly one card you can take. It will also hit none far more than you might hope. Where this has a bit of hope is as a self mill tool. It is also ultimately card advantage too and more of a Think Twice than a Commune with Nature or Adventurous Impulse. Tracker's Instincts is a much more powerful tool in the same vein as this but it is effectively gold. Without access to blue you are probably going to play this over it if you want that kind of support. I have certainly played a bunch of Instincts over the years and so I expect this will see about as much play, all exclusively in the constructed side of things. The cool thing about this in a deck after self mill is that it both does some milling and gives you some benefits when it is milled. This synergy double whammy really helps mitigate the lowish power and helps keep the card pretty playable. 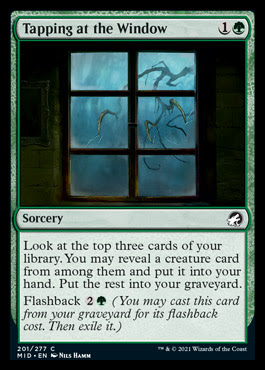 Path to the Festival 2

Likely just weaker than one of the 4 mana double ramp cards but flashback and scry are certainly nice things that generally help the card and in the case of the former, give it some synergy potential. Too slow for drafting cubes but a nice looking card for EDH and some other application here and there. 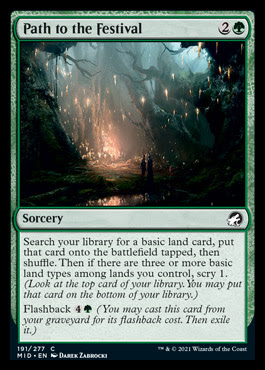 Some value and some synergic self mill. Sadly a card that wishes it could be scaled down and only cost 2 mana, at three the power is just lacking. 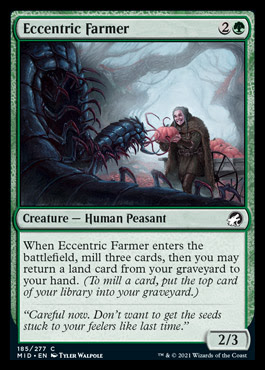 Lovely design concept but ruined by cautious powering. This could cost 1 and not be viable for my cube. 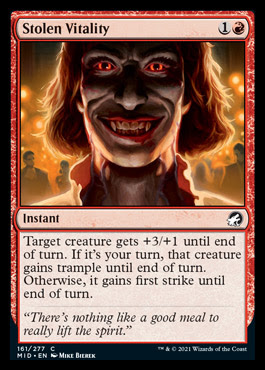 Just narrow enough to miss the mark. This is cheap and useful. In a world where I lacked things like Abrade and the many modal Shatters since then I would be all over this. Sadly for it I just now have access to things that are better than a shonky combat trick. Neither mode has that broad playability you look for in a modal card so as to anchor the floor nice and high. 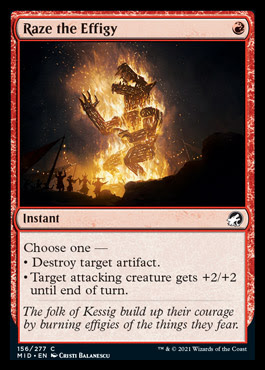 Card draw and burn in the same card always opens the eye. This however is pitiful, I wouldn't even bother with this in a vampire deck. 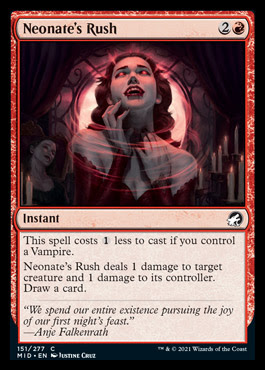 This however I very much would play in a tribal deck. Lighting Bolt is good. Three mana Bolt isn't the worst. No where near the requisite support to consider this in drafting cubes but a solid card. 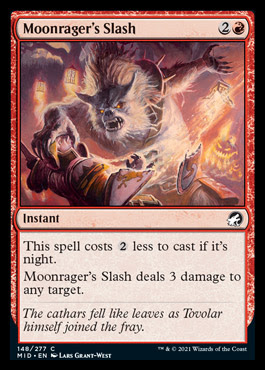