On death trigger for the mill really lowers the playability of this card as you simply can't reply on it to do what you want in good time. The disturbed mode is interesting but too pricy for the kinds of places actually interest in the effect. 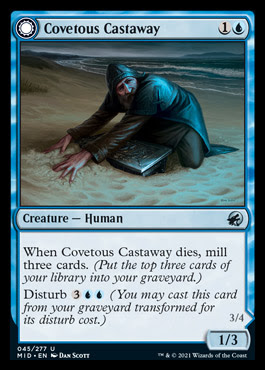 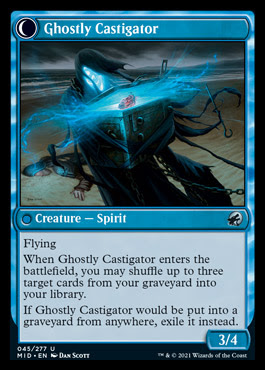 This is close to viable but at three mana it just lacks the power to cut it. Day and night shift too infrequently and mild card quality isn't enough payoff. A one mana 2/1 version of this would be quite the exciting card for white! The colour is hungry for card selection. Just not this hungry. 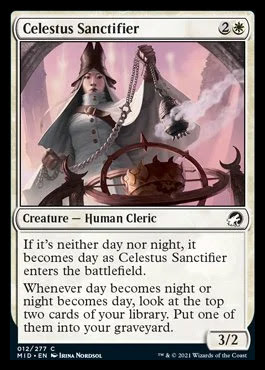 Mostly you want to play this as a 3/4 deathtouch that makes a pair of 2/2 decayed zombies. The 8 mana mode is powerful but not something you will get to very often. The two mana mode is not powerful but it will often be necessary when under attacking pressure or needing to be able to threaten a walker. The five mana mode is fairly poor as far as five mana army in a can cards go however it is in black which has precious few such cards and it is supplemented with cost flexibilities. The card is suitable and playable but not what I would call powerful. Just a fine card. I imagine also a cool card in tribal lists. This probably just doesn't get played as it is so far short of Grave Titan in power without being all that far away in cost. 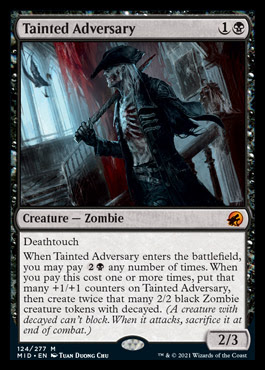 Overcost on the back end and too situational on the front. As a precondition for removal this is a shocking one almost always ensuring you two for one yourself. Lack of flash makes it even harder to use. Can't see ever playing this. 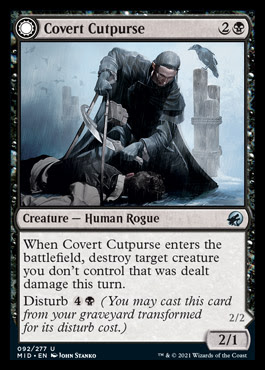 Either side of this card would likely be better if it didn't flip. If you want to lock something down you want to do it all the time not half the time and the same applies to drawing cards. This is a tiny bit clunky thanks to the costs and then very clunky thanks to the transform. I am just always playing a Mazemind Tome or an Icy Manipulator style of card over this. 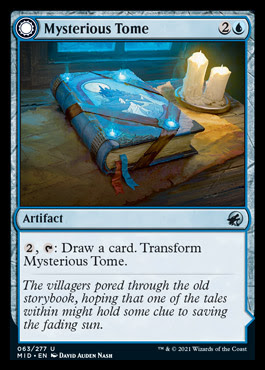 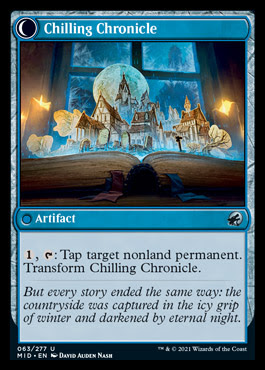 This is a long way from cube playable with so many superior Control Magic effects already in existence. 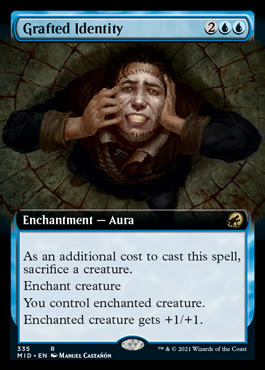 This is foolishly good. It simply has no downside. The body is powerful and relevant and reasonably cost. It has an on death trigger that is broadly useful and has some scaling potential. Then it sits in play and is also a bit of an Experimental Frenzy if you want too. A kindly convenient one with a juicy may clause not forcing your hand at any point. This is good enough to play in a mono red deck quite comfortably and so it is just even better in decks with more colours. A card normally only needs to be good on one of the metrics of tempo, value, threat, and disruption, and this Regent is good on multiple without being blank on any. 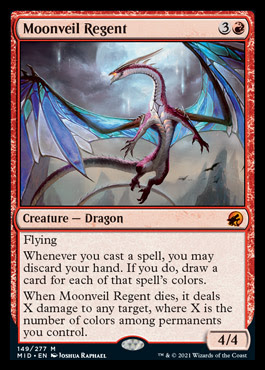 The front side lacks relevance and the backside is too expensive. The Chaplain looks like it should be good as it has so much stuff but it is really just a Tundra Wolves. The disturbed is just the cost of the back half and the ward is of minimal value given it is (barely) protecting something no one cares about. Sheildgeist is a cool thing to have but I want more than cool at 4 mana. I certainly want more than a single toughness. I want to find this a home and have it be playable somewhere as it is a pretty cool card but I am failing rather. The card is fine, it just isn't powerful enough nor really even that well suited. The point at which this could be considered suitable puts it firmly into the too narrow camp. 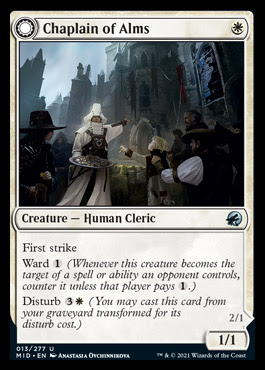 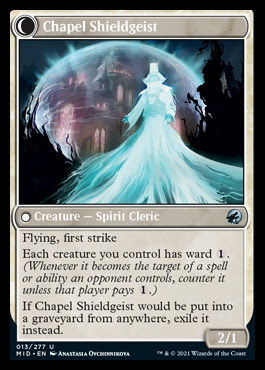 A 2/1 flash flying body is a nice starting place. Not all that powerful nor playable at just that but still quite a useful little body. You will play this in two mana mode a lot more than Snapcaster and it will kill far more planeswalkers and players as a two drop as well. Adversary then scales up to a 4 mana 3/2, a six mana 4/3 and an eight mana 5/4. Never efficient as a statline but always relevant thanks to the flight. Four mana will be the most commonly used mode by a mile. Sometimes it will be to protect something of yours from removal but mostly I suspect it will be used to calm down aggression and help stabilize. A nice way to save a walker. Phasing something out and getting a 3/2 blocker will take the steam out of most attacks or indeed pave the way for profitable ones of your own. The six mana mode is a bit more powerful but along the same lines and not more powerful for the mana or more relevantly for the stage of the game. Adversary is a very flexible card in both cost and application. It is not all that hard to turn it into value even if it isn't intrinsically a value tool. The same is true of tempo as well. The power level is not all that high but I think sheer convenience and utility will overcome that and result in a nice little tool for blue. A bit like a Brazen Borrower with a bit less raw power and a bit more flexibility. 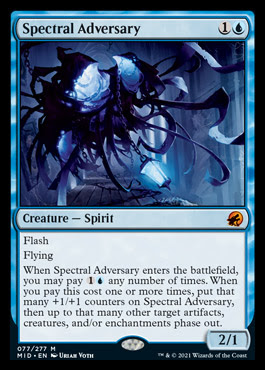 A Whitemane Lion that flies for an extra mana. Too costly for normal use but might see occasional play in Oketra's Monument and Soul Sister builds for some redundancy. R 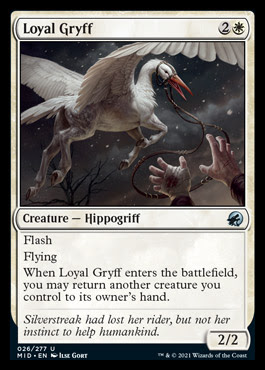 This is a card I will play in almost every green deck. It is absolutely premium all round filler with basically no downside. It is like Llanowar Visionary except with way more tempo, threat and board control. That is not to say it is better than Visionary as mana is known to be very good. They are both just similarly powerful and playable cards. In practice Tracker is just an upgrade on Jadelight Ranger. It gives you more control and offers you the best of all worlds. You get to have a 4/3 and you still get to have your card at some point. Costing only 1 green means this will get slapped into most green decks unlike Jadelight Ranger which only goes in the heavier green lists. Vigilance is lovely too for such a cheap and meaty card, especially one you are so happy to trade with. Controlling a token is the norm in cube and so this will often remain a 4/3 even when you do use the clue quickly. There are plenty of situations where just being two permanents in one card is useful as well. I just have nothing bad to say about this card. It is somehow both a relevant play and a supporting filler card and that all makes it rather scary. 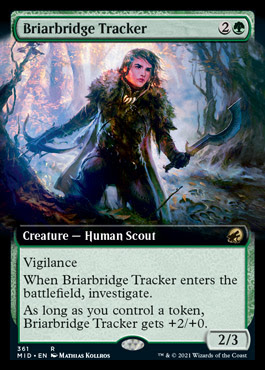 Hellspark Elemental is back but this time he is more total mana and more colours with the upside being that it is a vampire? A sorcery? having lifelink? I am sure there are synergy settings where this is appropriate at which point it's fine power level is enough to make it a consideration. For general use this is a non-starter. 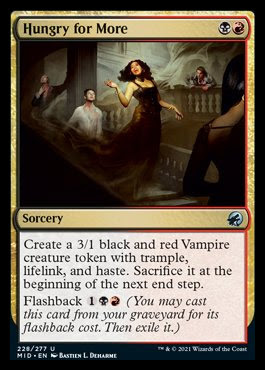 Yet more Oblivion Ring options that I don't need. This is playable but it is also a very long way down the list of cards like this I would play. 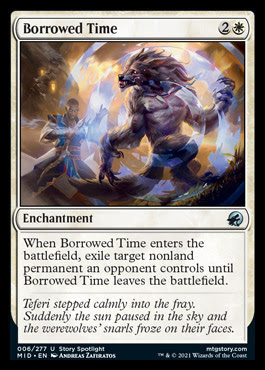 Fascinating card. Timely Reinforcements is a playable sideboard card and this is a cheaper version that has potential to draw cards as well. That certainly makes me take interest. You really only need any two of the modes to trigger before this card is impressive returns on the mana. When all three hit, or really even just dorks and cards, then the card is nutty good value. The issue is that different modes are wildly differing in value based on the matchup or the situation. Getting the triggers you want will be hard. As a sideboard sort of tool this isn't all that exciting as Timely Reinforcements just offers more total stuff for your card. You are unlikely to trigger the draw mode in the games you want those 1/1s and the life. My guess is that this will be too random to want to play in general and too often providing the wrong returns. I do however need to test it because it is rather an unknown and has such a high ceiling. 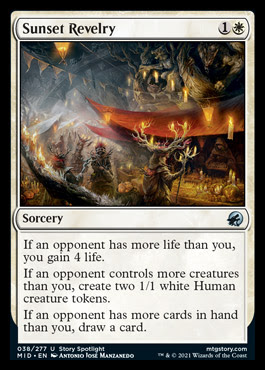