There is a lot of power locked up here but it is mostly rather contained behind tribal preconditions. In a deck where you can expect to flip this sometimes and have a good chance of getting to draw with it via another wolf then it is a premium threat. In all other places it is mostly a 3/3 Scroll Thief which remains a long way from good enough. The Kessig Wolf Run ability is particularly strong given the card draw mode but is plenty strong as it stands acting as a threat, a mana sink, and the general ruin of combat for your opponent. Shame it is locked behind a tribal clause... 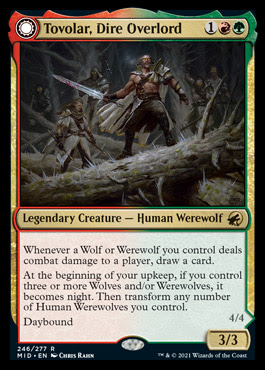 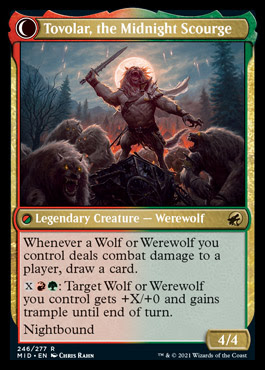 Humans are the most common type on dorks in cubes. This is still only around 30% which in addition to being gold makes Sigarda a little too narrow for my liking. The body is certainly powerful and the Anthem can be devastating but mostly the body will get answered and the Anthem will end up being minor. Obviously if you start to trigger and hit with Sigarda the game is going to be yours shortly but that will not be the norm, likely not even in tribal decks. Even so, Sigarda is an immensely good lord for those kinds of deck should your curve be going that far. 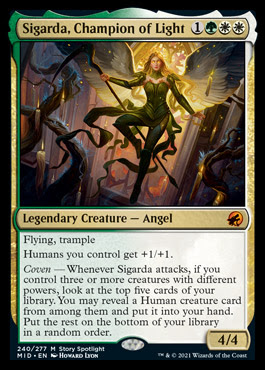 Secrets of the Key 4

This is some kind of crazy Think Twice. If you want to pay 11 mana to Ancestral Recall this is your best tool for the job. As a pure card draw spell this falls pretty short. It is convenient like a Mazemind Tome in how you spend your mana but it is still a long way from efficient, 4 cards and 4 life  for 10 mana is > 3 cards for 11 mana. The card isn't really about the draw so much as it is about putting useful artifacts into play. I quite like the idea of this supporting my Urza decks. This is a nice low cost way to safely bolster my artifact count early while still giving me some late game action. It is a somewhat narrow support card but it will get play being so cheap to cast and so clean in what it does. 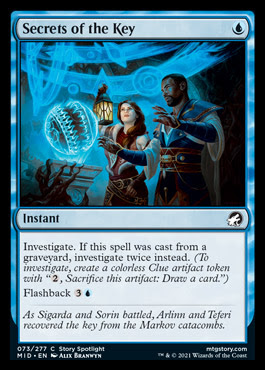 This is quite the upgrade to Banisher Priest. The more relevant question is if this is actually better than Fairgrounds Warden? When you play a card like this it is for the removal effect and so resilience is important. That starting toughness on Warden might simply be enough to outclass this despite Brutal Cathar having way more raw power. I think that in cube Cathar will rise to the top of the pile (excluding Skyclave Apparition of course) of these Oblivion Ring style dorks. This is down to it being something you are happy to have in play compared to the others which one tends to hold in hand for the right moment. This flips into something substantial and then threatens to exile more dorks again. I suspect I will often just flop this out whenever I can take out a token or even just disrupt some tempo. While this is of sufficient power and utility for cube play it looks like the kind of card I will just wind up cutting for space in the near future. It is a bit tempo and a bit removal, it does nothing that well or that reliably. Yes, it has high power levels but that is everything in cube for three mana or more. When you look at the three drops getting cut from cubes this starts to look less impressive. 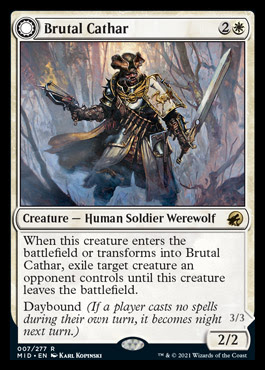 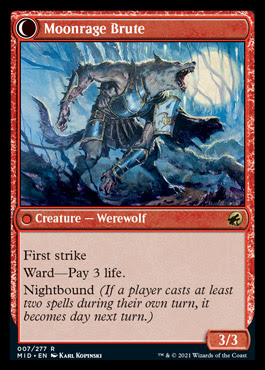 Nice interesting flavourful design. Cute card too but sadly a little lacking in the power department. There are no archetypes that want this set of bodies, likely even including constructed lists. Self mill getting you this for free still doesn't really excite. Insufficient on the old impact. 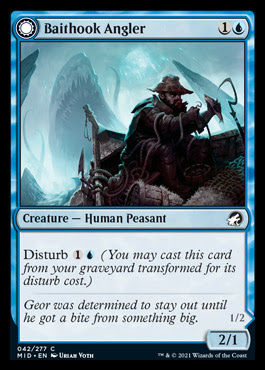 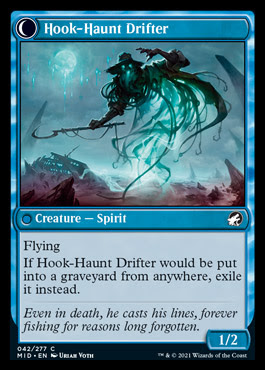 The card this has to compete with is On Thin Ice and it mostly fails at doing that. You do not want to play this in an aggressive deck as you give them a wall to absorb damage with until you cough up another 3 mana. In a control deck this is a little better but you are less likely to obtain coven. The main two things working against this are the same things that work against cards like Pacifism. It is too easy to get your dork back in action with flicker or even bounce effects on top of enchantment removal and it does nothing to stop activated and passive abilities on the creature. 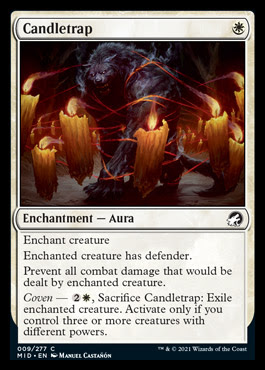 With coven active this is great. That however is not how you want combat tricks to be. They are situational to begin with so having to fulfil other criteria in order to not suck is very awkward. Two mana is also pretty steep for a combat trick and makes it a tougher thing to use well. Compare this to a Mutagenic Growth that is the same pump for zero mana and as such always active and impossible to play around. Then just imagine spending that two mana later down the line on a clue or something and never bother playing this. 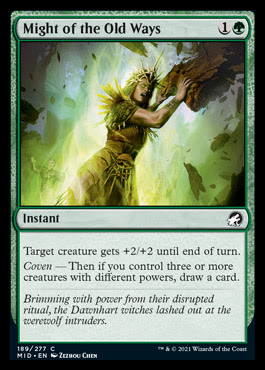 This has a lot going on but really it is a glorified yet ineffective Coal Stoker. You might have played this in a quirky synergy deck but needing to have caused life loss to get the relevant trigger makes this all too conditional to realistically get action. 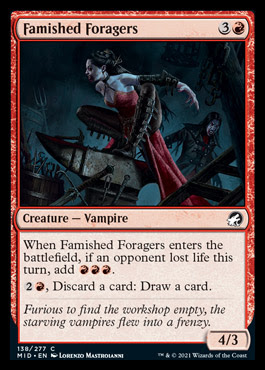 This has to be the best Fireball for cube play. It is passable flexible removal in the early and mid game while still having all that late game reach that Fireball offers. The issue with Fireball cards has always been that they have really poor early game damage output. Light up the Night solves this issue cleanly with an X+1 on non-player targets. The flashback is really interesting too. It increases the threat of your walkers, effectively giving any a new and dangerous ultimate you can fire at any time. This is particularly good with walkers like Dack Fayden who lack serious payoff when you have lots of loyalty. It is a cool combo with Chandra, Fire Artisan too. I suspect this will end a lot of games. A number of those as quite the surprise too. The flashback, much like with Devil's Play helps to offset lower early game impact as it is a card you are quite happy to loot away and just lean on the flashback value option. 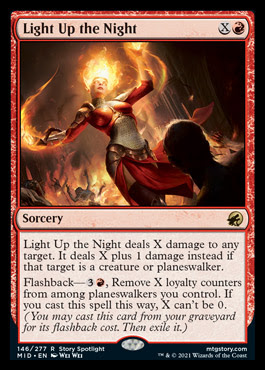 Blue loves payoff cards for playing instants and sorceries thanks to having a powerful and deep pool of cheap cantrips. Sadly a lot of the blue ones are shockly bad tempo four drops that are pretty hard to get working. As such blue is often using other colours for these pay offs (Sedgemoor Witch, Young Pyromancer, Monastery Mentor etc). Poppet Stitcher being a three drop greatly increases the viability. Three toughness also goes a good long way to helping with this viability. The flip side of the card in addition to this all help to make up for the somewhat weaker tokens. It is actually fairly dangerous, not only turning your decayed zombies into far more useful and threatening 3/3s but also protecting the Stitcher from mass removal. This guy has a lot of reach and value potential. It is a little slow and awkward but I think it ticks enough boxes to get work done in the cube. Unanswered he should end a game only a touch slower than Mentor. 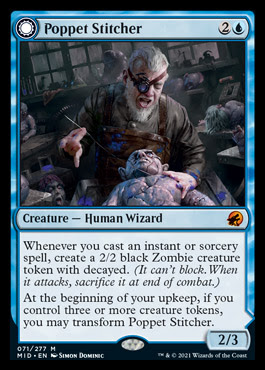 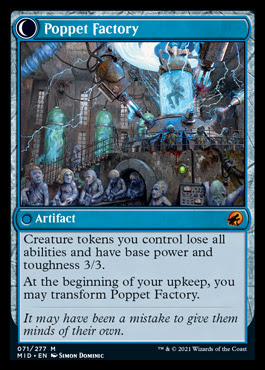 Making a token on entering play goes a long way to making this more playable but sadly it is still too demanding on support for a draft setting. Despite there being plenty of good ways to cast stuff from the bin you need more than you can reasonably expect to get in a draft to make this good. As such this is a build around only tool. Quite a cool one that makes me want to play it which is impressive for a simple card that is a long way from busted. Even when supported approrpriately this card is still really just a fair spell. 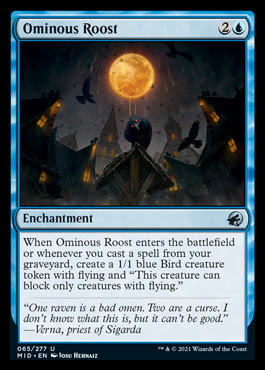