A delightful cheap disruptive two for one. This is pretty poor tempo and might also wind up being relatively low value too. The average CMC of things you kill are not going to exceed the cost of playing this and of the things you kill many will have otherwise gained value or just not cost much to deploy. I can see this killing a lot of thopter tokens for example. The danger with this card is having it sit in hand without targets. I want it to be viable as I love both investigate and this kind of card but there is a high chance this lacks the range and power for cube. When you kill off one of the pricier cards like low power like Torbran or a Yawgmoth with Foul Play it will feel great but at sorcery speed that could still be too late. 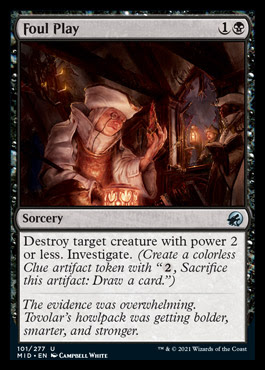 This is a bad looter than turns into a dull threat. To get to the Fiend you need to pay 5 total mana and three life while waiting three turns. Sure, Fiend is fairly big and threatening but it is fairly easily answered and doesn't afford tempo or value in any way. If you want the loot part you probably don't want it to flip a bunch of the time. If you want the dork side then the loots are going to feel like a real chore. An awkward pairing of effects on a deceptively low power overall package. 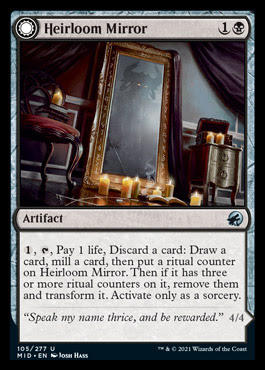 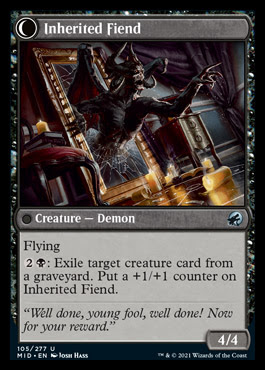 This is a bit of a value Shrine of Burning Rage. It charges slower but it is both reusable and has an actual card draw mode. The nature of the card advantage does mean that paying two is a little uncomfortable. You can dig for lands or make solid use of it late game but in the midgame it will just misfire too often to be worth activating for gas. Even so, a card that is both reach, control, and value has to be taken seriously. The downside with this card is speed and tempo. Similar but not the same. The speed relates to how many turns you need this around before it does much, which is lots, and thus why this card is slow. Tempo relates to how efficient the card is for the mana and on an infinite timescale it is indeed quite efficient. Over three or four turns however, which is a much more reasonable number to consider for the practical performance estimations of a card, the efficiency is going to blow. I like this card a great deal, there are places it will fit in, and there are even going to be games in which it dominates. Overall though, this card is just too fun and fancy to compete at the big boys table. 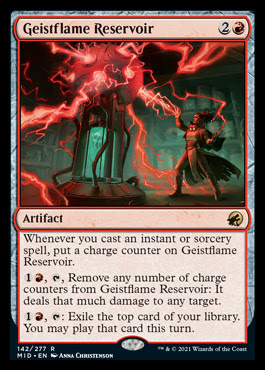 If you are bothering to recur stuff in cube then you can just get a real threat for a similar cost. If you are trying to play this for value in a more conventional sense then the situational nature on top of the being gold all rule it out comfortably. This might get some love in a creature based combo deck where it can help to recur key combo pieces. Beyond that I see little application for this. 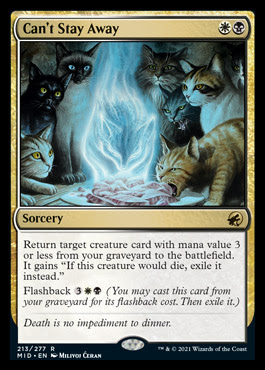 A cute card but a bit slow and aimless. I am most likely to play this for aura/curse synergy or because I want lifegain. These are all constructed synergy settings. There is no way I am playing this in just a deck. The front end is terrible tempo and far to slow to really offer reach. The back end is meatier but a bit of a do nothing that easily dies or just goes back to not being a board presence. An interesting card and not without a degree of power. More a case of poor suitability and internal disharmonies. 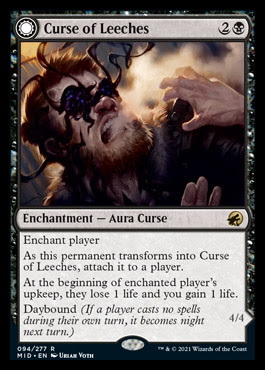 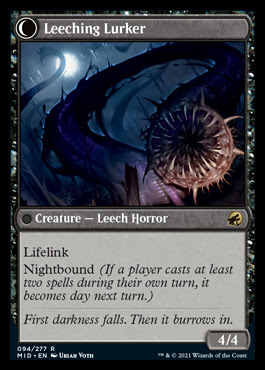 A Tarmogoyf that spawns another every one of your end steps. It does only count your own graveyard so it will be smaller than Goyf and more easily disrupted for that matter too. I rather prefer the reliability of Whisperwood Elemental and Biogenic Ooze. This may have some perks over alternatives and does the kind of thing you want a five drop to do but the upsides do not outweigh the drawbacks when faced with such stiff opposition. 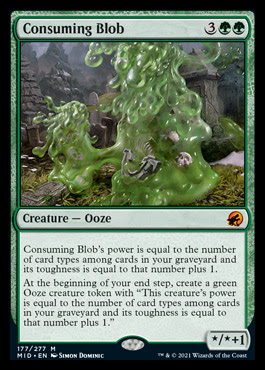 Golden flashbacking Glimpse of Nature with an enchantment trigger slapped on for good measure. This is a lot of card to be sure but I am not exactly sure how excited I am about any of these extra aspects. Mostly this seems like a bad Glimpse that might not even get play over Beck // Call due to colours. You certainly shouldn't play a card like this unless you are fully building around it and that is hard enough to do already in singleton. Redundancy in this effect certainly helps but we are still talking a fringe deck you make just for fun. 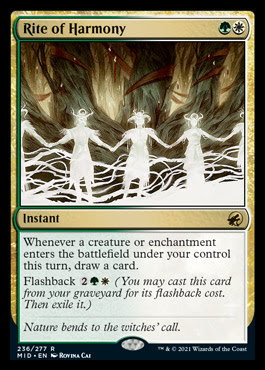 Quite delicious anti storm hate here. Too easily played round to be of general use but as a targetted sideboard tool this has some roles to play. 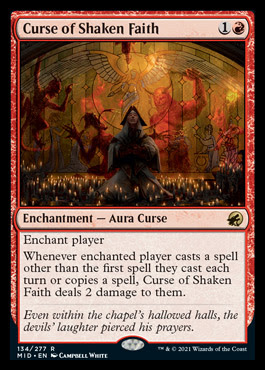 Normally a card like this with a limp front end and an appealing back end is a total trap. This has a bit more chance of success for a couple of reasons. Firstly, the flip condition is actually pretty easy, you only need to do damage with your spell, it isn't just to a player. That nearly translates into just casting an instant or sorcery. You can do it reliably and easily and sometimes even for 0 mana and blow someone out with it. Embodiment of Flame is the other thing that makes this enticing. Obviously the power is high when it is a two mana investment. It is also just a great thing to have in all metrics. It is good early for being high tempo, it is good late for the value. It is good as an aggressive card or as a more midrange affair. It reminds me most of Dragon's Rage Channeler. A cheap dork than can become overstatted and provides some ongoing value on cast triggers. DRC is better at the former, this is better at the latter. This certainly isn't anywhere near as busted as DRC but I do imagine it stands some chance in cube. A test candidate for sure. 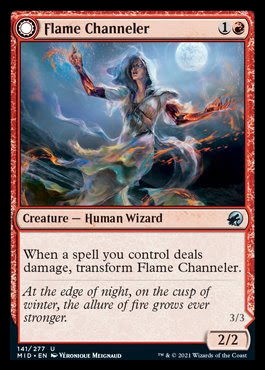 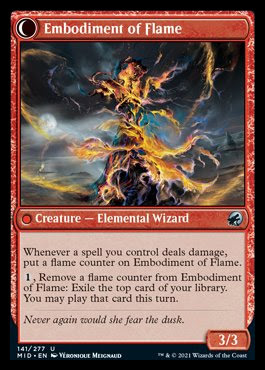 A lot of overlap with Kalitas on this card. Both exile opponents dorks when they die and both reward you for doing so. Both are also four mana dorks with no EtB triggers or otherwise reliable value. This raises the bar for what they need to accomplish. Kalitas is a more defensive dork as he produces dorks that can block, has lifelink, and has the capacity to grow himself further putting him out of reach. Gisa on the other hand seems to have a rather higher ceiling with a decayed version of most cube dorks being substantially more impressive than a 2/2 token. Cheaper things tend to have EtB effects and bigger things are so powerful that just one hit with them is going to do way more work than a 2/2 token could dream of. The bigger things often have EtB effects themselves and then there are those many dorks that have triggered and passive effects that the decayed downside doesn't impinge upon. Much as Gisa seems more powerful than Kalitas I am not sure she is more suited to cube. The strength of Kalitas is in his stabilizing ability which Gisa lacks. Gisa feels rather a win more card and thus not a good fit for cubes. I will very much need to test this one as there is a point where the power is just enough to carry a card past these kinds of issues. I would guess at Gisa not having it but she is still worthy of some playtesting to confirm. 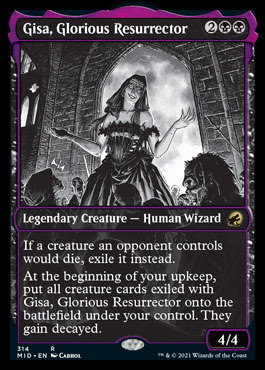 Another one of those cards that clearly has no chance in any sort of cube setting due to low power and lack of unique effect. This in turn highlights quite the extent of the power creep as not all that long ago this would have been playable, and if we go back over a decade then this would absolutely be a lock in card for cube. Two bodies in one with a useful ability on the first and a total load of stats above the curve on mana paid used to tick all the boxes. This is not that far off a Flesh Carver and for a long time that was one of blacks best creatures. Sadly now Carver is just clinging on, largely due to the memory of power once held.  . 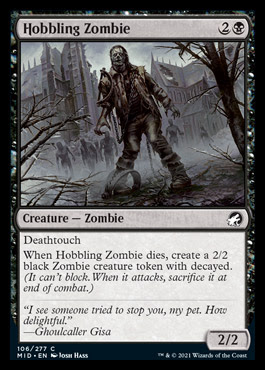