A quirky little card that I obviously like due to the low low cost. Certainly there are constructed places you might want a card such as this thanks to an array of potential synergies and that low low cost. The big question is how much a card like this is of interest in a drafting cube and the answer is sadly a likely not. A 1/3 is a sizeable wall for the cost which does help to justify the rather less impactful card quality effects but it is still nominally very small. Surveil is lovely but tapping three total dorks is a long way from a low cost. Being a blue zombie isn't a huge deal in most cubes either. 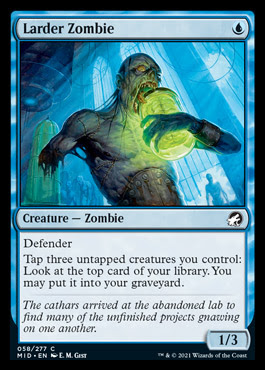 A nice cheap little lord that does rather invite you to play blue with your zombie tribal lists thanks to the high power and spot on suitability of this card. Tribal only card but a good 'un. 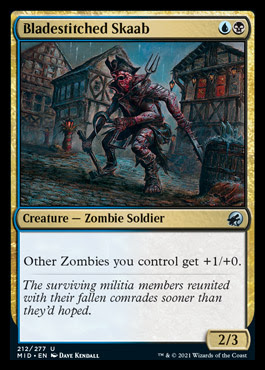 Interesting design. Normally a card like this is a bit slow and a bit too much of a risk being a three drop that doesn't offer returns right away. The ward 1 might help solve that though because it means any removal used on it will not gain nearly as much tempo, if at all, and will make Dawnguard that much safer. Most aggressive white decks should have a hit rate on 3 CMC or less dorks in four cards well over 60% which would be good if you stood much chance of flipping day and night around much. Sadly it is slow and hard trying to cycle through day and night and the payoff isn't worth it here. I do hope to see more cards without immediate impact made playable with low ward values. I like the idea of it not to be a protection for the dork per se but a protection against tempo losses. It would also just be nice to not instantly have to rule out a load of more expensive cards on the spot because playing them into cheap removal is game endingly bad. 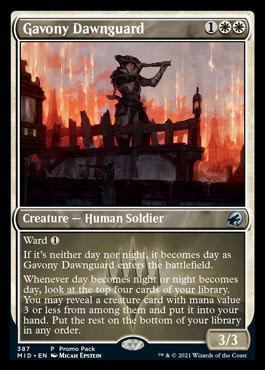 A bit of a Mire Triton card. The mill makes it great support for loads of things. The tap is minor but will come up here and there and is reasonably useful. The disturb effect gives you some real punch on your card too with a useful threat that is cheap on mana and effectively free on cards. As a mono coloured card this would be a great support tool for cube. In gold it isn't playable or powerful enough to clear the bar. I do at least anticipate playing this in some constructed decks. 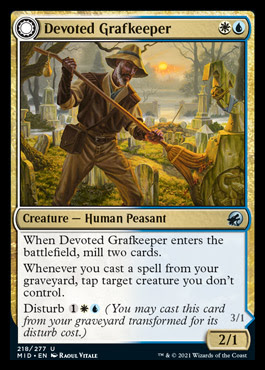 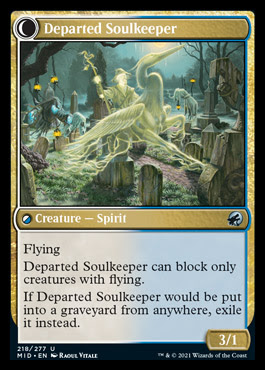 This is an intriguing combat trick come Fireball card. The first strike and trample make it something you can often play at one mana usefully. The X means this can do a lot of work late. I suspect it is not range or utility that harm this card but how often it is useful and how much return you can get from it. Certainly worth testing but I just can't see people putting a situational luxury card like this in a list very often over a threat or a removal spell. 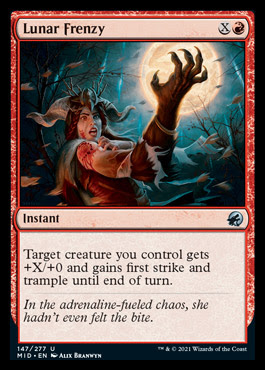 A Savannah Lions with upside is always a nice starting place. A few years back it would have already meant at least and 8/10 rating. The upside here doesn't help the Pit Fighter out much as a 2/1 beater but it is a highly useful and rounded ability that has plenty of synergies. It also complements the low power of the card in that you can effectively cycle it away later in the game and dig into some gas. A big upgrade to Wild Dogs! Pit Fighter will do good work in vampire tribal and is comfortably enough to join the ranks of generic cheap red beaters in cube. It will get in some early damage and cash out later down the line. A more contained version of Bomat Courier if you will. Less cap on the value but less risk with more upfront punch as well. You can even sack off other vampires and get some real dig out of Pit Fighter. Not a bomb as it is still just a 2/1 beater as the primary function and that is just fine these days. 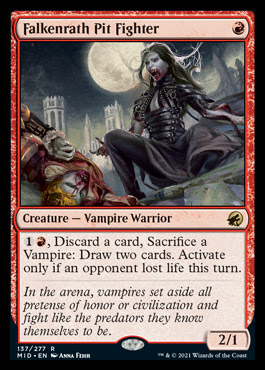 Powerful but narrow. You have to be Izzet and you have to have a very high count of instants and sorceries. That is some tempo decks, some control decks, and a lot of storm deck but even if you support all these in your cube it still isn't really enough to justify running Infusion. Especially with Expressive Iteration competing with it. As far as card quality goes this not finding lands is a bit of an issue. Impulse is so much safer, more reliable, and more playable. As far as value goes the second part costing five makes it rather less impressive in tempo and combo decks. 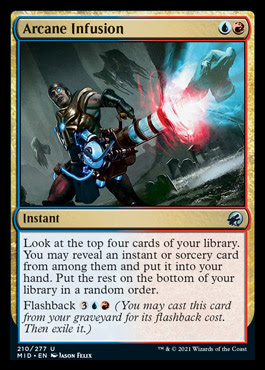 A Bear that tries to be a lord and a mana dork and fails a bit at both. I would play this in a tribal deck but it isn't as good as it looks as you need to get it to night time. I am certainly not interested in this when the Anthem isn't even potentially relevant. During the day this is just a bad Magda. 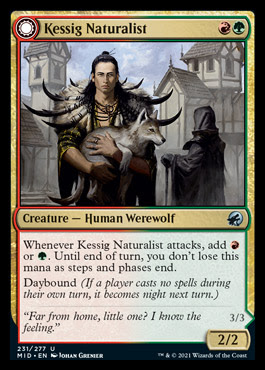 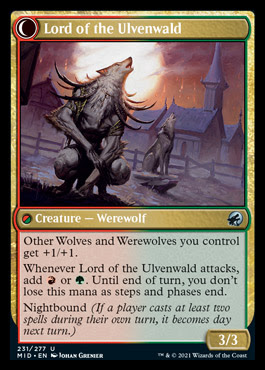 An over priced mana rock that lets you mess about with day and night and offers a smattering of life and loots as they change. Cute but not the kind of thing offering enough payoff in cube. At significantly reduced costs the life and loots would become good but we are talking some serious reductions! As it is cost you would need like a quarter of the cards in your cube to have day and night synergies before this gets good. 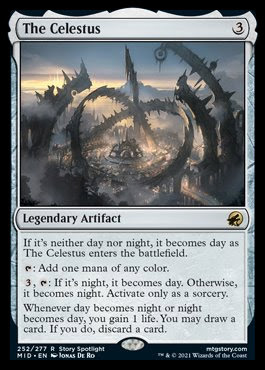 This is a bit of a wannabe lord as it needs triggers to activate it which generally means it will not be on lord detail for the first attack possible as Socialite will need making post combat. Likely still cheap and powerful enough to make it into most vampire decks in Rakdos but not seeing play anywhere else. 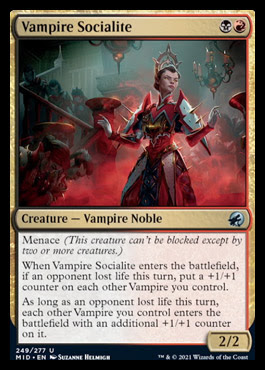 Big tokens for lots of mana and lots of setup. Yes, this can make big tokens but often it won't and even when it does those tokens will tend to do little. This isn't useful outside of combo one shot abuse and that feels like far too much work to be close to a good combo. 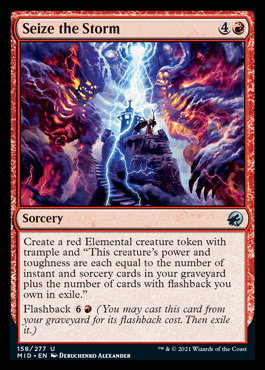 While the ward protects this nicely from spot removal blowouts the card simply isn't very threatening or powerful. The 3/3 mode struggles to get work done in combat and even the 4/4 side isn't terrifying. It still gets easily taken out in combat. Exile effects are handy but it seems to be the main thing this card has going on. Medium stats, meagre lifegain potential, and limited yard disruption do not excite in this package. The ward is great but it has to protect something worth protecting to be good and this doesn't seem like it is that. A card needs to be good on one or more of the following metrics of the game, value (card advantage), tempo, threat, or disruption. This only achieves any of these metrics mildly, calling it good in one would be more than generous. I still probably need to test it to confirm my suspicions that this is bad in cube as there is still quite a lot of raw power in this card. 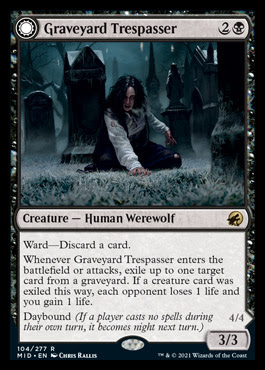 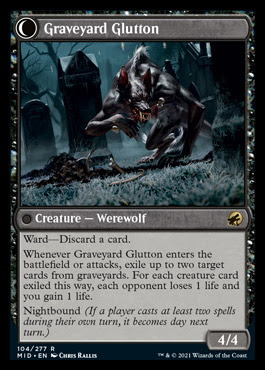 I love this. Used well this is just a tax, you pay 1 and they pay 2 leaving you ahead. Obviously in singleton you always sac and draw your card. It gets rather better in formats containing multiples. The issue facing this is naming correctly. This can be easy when the draft format allows for it and you pay attention. It can be a free roll when you have cards like Peek and Elite Spellbinder but when you are just guessing blind the card isn't playable. At best this is super proactive Remand. At worst it is a do nothing. I want to play with this but I fear it is likely all a bit too Meddling Mage to sensibly run in a draft cube. 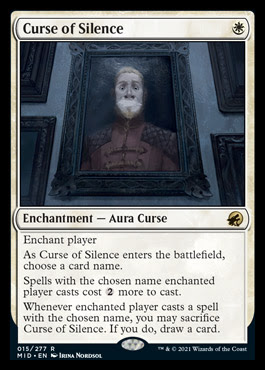 This is a decently efficient and effective token producer in any deck with a wealth of cheap dorks and some control over the time of their death. If only partially supported the card can still be great but it relies on your opponent having a deck that involves a lot of their dorks winding up dead. Really I think this can only be played in Aristocrat style decks that make use of the tokens as sac fodder and aggressive lists that can usefully apply pressure with the decayed tokens. The once per turn limit doesn't ruin the card as the trigger works on both your dork sand the opponent's dorks and it works in both players turns ensuring a good steady flow of decayed zombies. The cost is right for the potential and expected outlay of this enchantment. This is a little narrow and conditional for my liking but it still has a lot of potential and certainly merits testing. 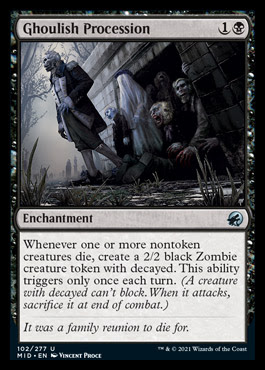