I like this but it is quite a lot of do nothing text. The protection is near useless in cubes. The counters is so expensive that it isn't useable that often and unlikely to be impressive when it is. It will ultimately win a board stall, which I guess is nice for a ramp dork to be able to do but still. The best thing here is the ability to turn your other dorks into mana dorks. Cool but something Rishkar already does and he isn't all that. Rishkar is also much better tempo, less narrow, and just the one colour. Mostly Katilda falls down on being a gold mana dork, the bar for them is so so high. I might play this in a human deck based in these colours. That might is itself pretty damning pretty damning. 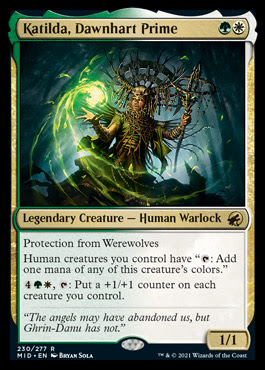 This is loads of value and tempo. It is however not really a card that stands alone all that well. You need to have targets in the bin and in order to do that you need to avoid some disruption and build with a high density of targets. This limits the card to certain archetypes. Yes, in a control deck where you can recur a Wall of Omens and a Jace or a Charming Prince then the card is a joke but it won't be that, you just don't have the density of targets. In a beatdown deck you will much more often but then there are two more problems. Firstly a five drop is a bit top heavy, you want a bit more punch and a bit less value. Secondly, a lot of your targets will be little beaters which are a whole lot less useful at the five mana mark. The potential power of this card is rather undone by the awkward way it matches up with archetypes. Not enough targets for this. Likely not even going to see play as a sideboard tool. 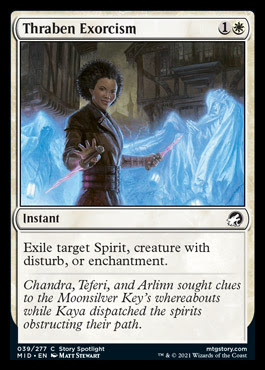 Impressive value dork but four is the point on the curve in cube where cards have to threaten rather than just setup well and offer some value. 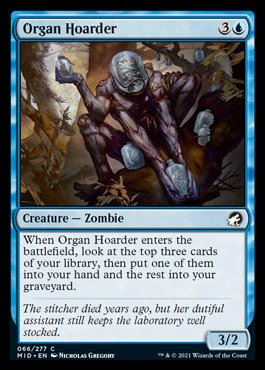 Love this card, really love the mana fixing mode but I can't see ever running it in a limited setting. As yard disruption it is lacking punch and that is the primary function. It is two mana to cycle without achieving all that much. The best hope for this is in decks with lots of self mill and discard that have a need to fix mana, say a deck leaning on red rituals to go off but also wanting to use some non-red mana as part of going off for example. 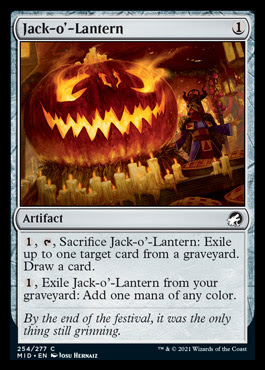 Teferi, Who Slows the Sunset 5

Likely the weakest Teferi although that isn't saying all that much. The issue here is that this is poor at protecting itself. It also needs to -2 if it wants to get value meaning it is low loyalty as well as vulnerable to the board. You have to make the +1 do a lot of work for you before this is even close to Architect of Thought, which is now a very fair and baseline level planeswalker for cube. This Tef will also need to significantly surpass that bar to get into cube being gold. So how do you make the +1 on this good? Mostly it will be about having a couple of those types that produce mana, a BoP or a Talisman plus your land. Every now and again it will be tapping down a blocker so as to attack an opposing planeswalker. Sometimes it will be tapping down land so as to help force through a spell in your turn. Disruption and protection beyond that are minimal as you just pass the turn and they all untap ready to produce mana and attack. The +1 is versatile and has some scaling you can try (and kind of need) to take advantage of. If you can get three mana or more out of the effect with some big mana producing permanents or a spread of all three then it is more exciting but this is all just more narrowness slapped on. The ultimate isn't even that winning, it will eventually, or at least deck you! As for right away the effects are pretty calm and reliant on other stuff you have going on. This dude has a great ceiling. He generates all the primary resources (life, cards, and mana) while having a good degree of versatility. In the right deck he is good but that deck is going to be hard to draft resulting in a card that is narrower as well as less effective than your entry level walkers like Garruk Wildspeaker and Architect of Thought. 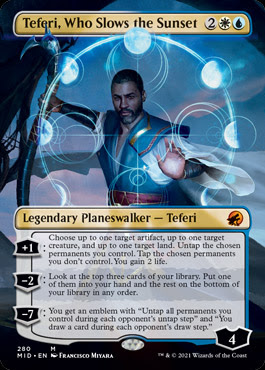 This is impressive but I am a little wary. Less so with the sacrifice than I am about the sorcery speed and being gold. Orzhov is utterly spoilt for removal and has all the very best. Realistically you can only fit two or three pure removal spells from the guild in your cube. Needing to sac something is a drawback but a pretty negligible one in a number of decks. It does more to make this narrower than it does to hurt the power. Rite of Oblivion is low cost, exile quality and comprehensive target range. The real temptation here is the flashback. Not only is it a great card to have flashback on the cost of doing so is really low. Like Utter End is an actual spell...  Without the flashback I would easily say stick to cards like Bone Shards, Vanishing Verse, or Anguished Unmaking. With the flashback this might just be too good to be held back by some narrowness. This just gives so much control over a game for very little card or mana cost. As far as budget cubes go this looks like an absolutely premium removal spell. I think this will outperform Vanishing Verse but it will be more polar and I imagine it will also see a bit less play resulting in me be much more likely to cut the Rite of Oblivion. 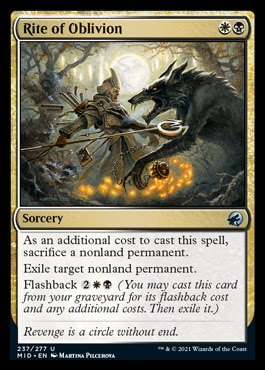 While this is potentially very powerful it has too many ifs to be a standout cube card. You need it to live which isn't super easy being a three drop with minimal toughness and no other means of protection. You then need it to flip and then you need to be able to attack with it while having targets in the bin to recur. The risk of just getting a 2/1 for three mana here is too great for this to be playable despite a reasonable power level and seemingly easy set of conditions. It is the cumulative effect of those conditions that push this into the basically unplayable ranks. 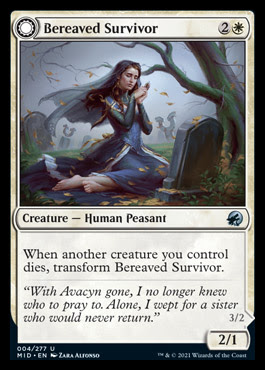 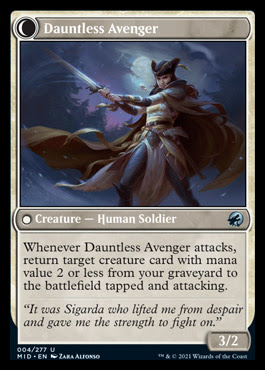 This is a rejigged Midnight Reaper which itself has been a decent cube card for some time. Reaper isn't so good I want multiple so it is going to be a case of which is more powerful and more suitable of the two. While Opportunist has some perks I am coming down on the side of Reaper. The Reaper is a more relevant body to have in play and also a safer one being able to replace itself with a card if answered. Reaper has better creature types and does a better job of protecting against mass removal too thanks to unrestricted triggering. The advantages of Opportunist are that it works with tokens and that it doesn't cost life. There are situations in which I would rather play the Opportunist but for the average situation this will not be the case and so this will not be in my drafting cube. Potent enough to get a test but familiar enough to not need a very long one. Utterly unreasonably levels of card advantage for a set booster draft or sealed at least! 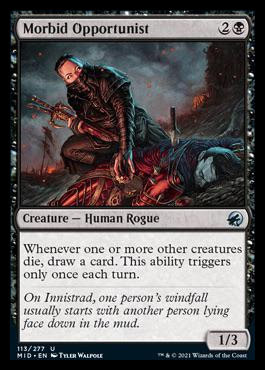 Cool design and a very high ceiling. You could easily steal a game with this quickly. It would not be at all hard to attack with this as a 5/5 on turn three. This is both high tempo and high threat and I suspect the average performance will be pretty solid. My main concern here is high risk. Every now and again this will let them hit you with a Jitte you didn't expect or use Grist to immediately kill the Specialist etc. There are just a few too many ways things can go very wrong when you give your opponents dorks. I will give this a little test but I don't see the payoff being worth the risk. This is just a beater and even good risk free ones of those above one mana get very little cube love. 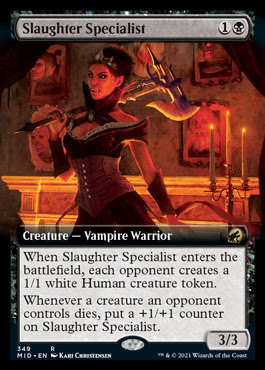 Sorcery limits the utility of the card and increases the risk. Add on top of that a situational gold card and you wind up with a pretty unplayable spell. For this to be worth it you need the night to be relevant and in cube draft it will not be. Some mild potential in tribal decks but that is all. 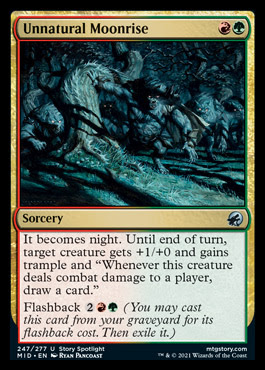