RIP Looter il-Kor. This is simply better and by a good margin too. It wasn't a card type drying out for redundancy either. Looter il-Kor did a lot of work in cube as a support card filling up the bin, a card quality card getting you the right stuff to play, and an offensive card applying pressure with evasion. The latter might sounds laughable until you play a Sword of Something or Other and that unblockable aspect suddenly looks terrifying. The main thing Stowaway has over Looter on the front side is that it can block which isn't something you want to do but it is huge when you need to. With no flipside this is more than enough better than Looter. Old il-Kor Looter is still a fine card but it will be seeing massively less play no that we have this instead. The backside is where Stowaway gets really impressive. It is also easy to flip this yourself if required with it being cheap to flop out and blue thus easily supported with relevant instants. A 2/1 unblockable Thieving Magpie is amazing. Loads of value, lots of threat. It can kill people and walkers with the damage sometimes but mostly the overwhelming card advantage will do it. The Werewolf is a must kill. It is easy to do so but that is fine on a card so cheap and likely to have already done good work. We always used to joke that Looter il-Kor was the Lava Axe Looter as it always seemed to get in five free damage. If this does that kind of living it will often get an extra Lava Spike and Ancestral Recall on top for free! I expect this to see more play than Dark Confidant. It certainly has a higher ceiling too and would not be stunned if the average performance of the cards was close. 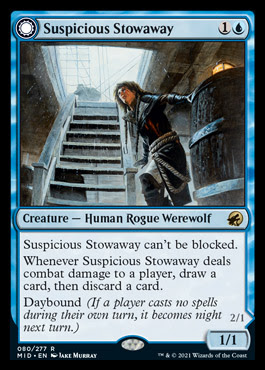 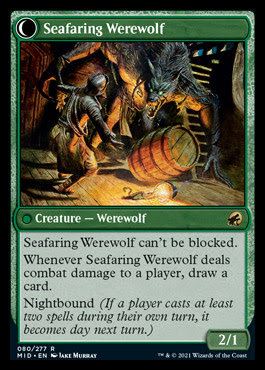 Curious card that seems impressive in a build around and a bit risky and polar in a cube draft setting. This offers cards and life which is amazing in a soul sisters deck or similar. The cost is quite high but given how much it does I would be hard pressed to leave it out of many builds. In a cube setting this is a big tempo loss which usually results in losing life. Things can then spiral as your card resembles a four mana Fountain of Renewal and never draws you a card. That might be OK verses a red deck but it isn't good. Against other aggressive decks it is just not gong to be enough without the card draw. Against slower decks you will be more able to trigger the drawing but the lifegain will matter a bit less. This feels a bit like the white Court card which was good but had really unpleasant polar play patterns and so got cut. 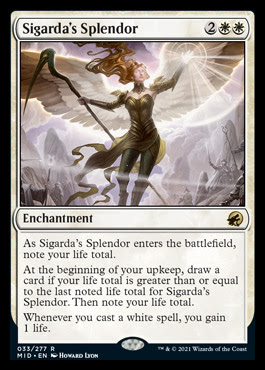 Lier, Disciple of the Drowned 7

Well now, this does a lot. Super Snapcaster Mage. Comically the first line of text here is a huge nerf to the card rather than a good thing. The most oppressive use for this would simply be in a control deck where you get to use all your counterspells twice and utterly lock down the game. That obviously isn't fun for at least one player. While it makes the card sensible it does also make it narrow for cube. Without counterspells what are you doing with this? Just drawing a load of cards with recast Serum Visions and the like? Perhaps you are going ham in a burn heavy deck? There are some good things to do but it is quite late in the day for the blue sorts of things. You likely need to make this on five and hope it lives so as to have a Yawmoth's Will style turn. I guess Time Walk effects are in fact the most abusive with this which is arguably less fun than the counterspells plan... Luckily those are on the decline in cubes. Lier certainly doesn't lack for power but there are a lot of red flags as well. Very polar, in need of support, narrow, anti-synergy with a core blue thing. I'll give this a lot of testing but I imagine this is a card I will not be keeping in the cube all that long despite the pretty foolish amount of power. 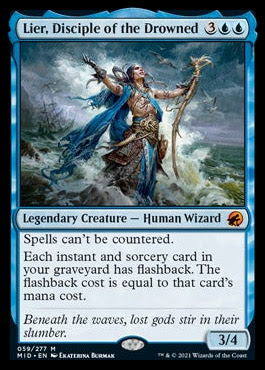 A cheap support card and mild tutor effect. The overall mana cost is reasonable but the split is a little bit sub par and will prevent this getting used in most places. Really this only has a chance if you have a specific mana rock you are looking to find for a combo. The power is too low to be of interest more generally. 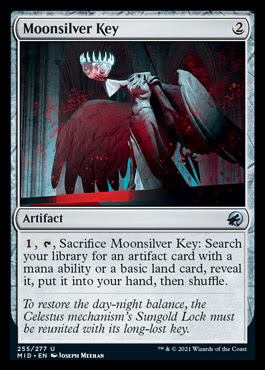 Very durdly card that doesn't do high impact stuff or really anything much rapidly. There are certainly some places in which this scales nicely and offers good support but those are constructed places not drafted ones. A maybe card for land decks isn't exactly a widely playable card. 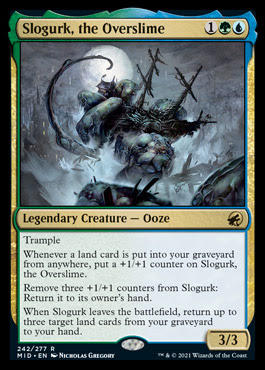 This is just an overcost Baral / Electromancer. The extra reduction isn't worth the wait, certainly not the extra cost. In EDH this will do some good work but in cube this is to be avoided. cost reduction cards are not as rare as they used to be and three mana ones have to be exceptional to get a look in. Yes, you can pair this with pump to do big stuff but that is so convoluted and narrow and at cross purposes to the kinds of things such a deck wants to be doing. 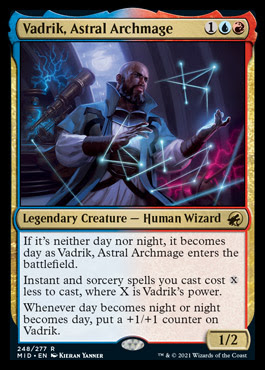 This is one of the better uses for decayed dorks I have seen. The cost is quite high to use and the body is fragile and low relevance which should combine to keep this out of most cubes. In constructed decks expecting to have a load of token dorks kicking around this has some hope of play. It can offer a lot of control over a game once the game is established while being a cheap card to deploy. 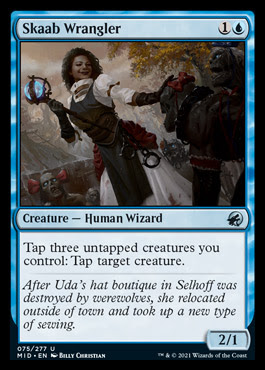 Pretty low power utility dork here. Green does want a smattering of dorks than can Naturalize stuff and this is pretty good but not clearly great. As such it just joins the pile of options that mildly vary in performance based on your cube design and the meta. The front end is a low powered but pleasantly mono coloured Qasali Pridemage. Proactive is nice as you can just flop it out whenever which is a perk over Reclamation Sage. The 2/1 left over body when you eventually cast it doesn't really make up for when it is doing nothing useful in hand. The flip side of this is interesting. There are lots of things you can Disenchant that you wouldn't waste a card on such as clues. Trapbreaker isn't so good that I would be playing it at three mana. At two it is decent certainly but I don't expect it to flip often or quickly so overall it adds only bit to the total potency. Test worthy for sure but anticipating a fairly low end cube card at best. More of a stopgap than a card you actively want. 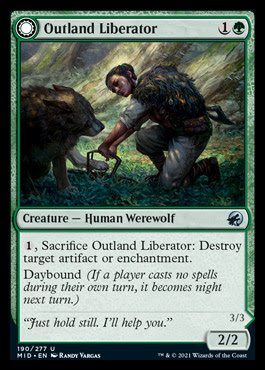 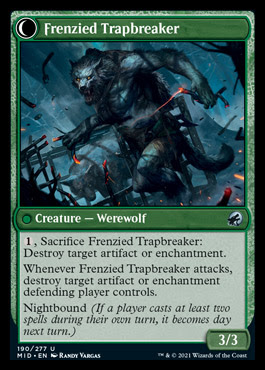 This is a two mana 2/3 that mills a bit to start with. Not impressive at all in other words. Give me a looter or something like a Mire Triton instead please. You have to want the flipside and that is another 5 mana just to get a 5/5 copy of something. Yes, it can scale up a bit in size and in terms of the effect of the cloned card but that isn't impressive. This is costly to use and likely just better as a Scarab God or even a Zombify... A very gold card with lots of hoops to jump through and lots of mana investment required for uninspired payoff. 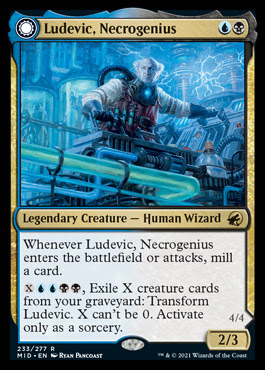 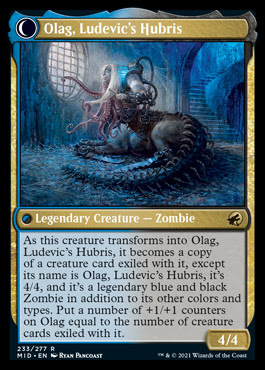 Part Tajic (Legion's Edge) and part Torbran. Mostly this is a Skyknight Legionnaire! It will buff a couple of your spells, it is pretty unlikely to prevent much damage. That isn't enough extra return, or indeed reliable enough return for this to cut it. Lots of power but more of a hoser card than a thing you just play. Against burn they just kill this. With burn you are going to be lucky to get more than a couple of extra damage out of this at which point play something with more impact, a harder hitting threat or some means of getting value. 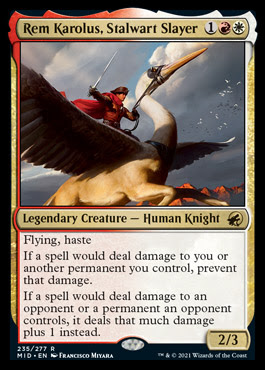