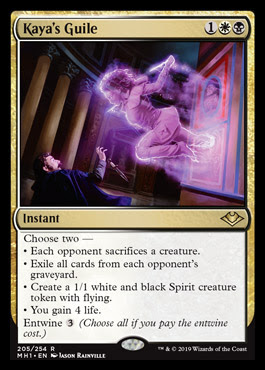 Cute card but no Kolaghan's Command. The issue this has is that most of the value and tempo are tied up to the Edict mode. If you don't force them to sac a guy then your card is not really worth what you are paying for it on average. Certainly there are times that removing a graveyard or gaining 4 life is all you really care about and it will win the game but mostly these are minor disruptions. The issue with the value all being tied to the Edict is that often your opponents will have crappy tokens. It is pretty hard to engineer the Edict you want without time and support, which is an issue. Cards like this should be the support, they should not need it. Sometimes the best you will be able to do with this card is kill a 1/1 token and get a 1/1 token. Sad to say I think that will be the most common "best" option for this which is why I am so down on it. The entwine effect doesn't really improve it that much. Double the cost to get the two least useful abilities? Not really interested. If you can't get the Edict to work for you are three mana, it not working for you at six isn't a solution. This is still very playable (for a gold card) but I just don't expect it to come close to some of the more boring removal spells on offer in terms of being a challenge for a drafting cube slot. In constructed events you are rarely going to be so pushed for space that you condense your life gain and graveyard hate into one card. Consecrate // Consume just feels like it does this cards job more effectively. 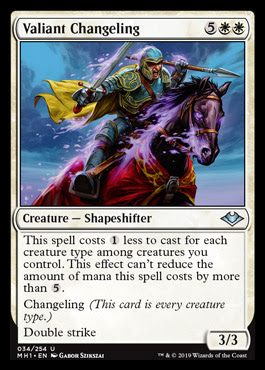 Seems a bit too much in need of support for the payoff. This is not exciting until it costs three really. To do that you will need at least two other dorks, more often three or four. That is a gross over extension and this is exactly the wrong kind of threat to be making when you are extended or extending! A vanilla 3/3 doublestrike for  2WW probably isn't good enough for the drafting cube these days which really guts this cards chances. 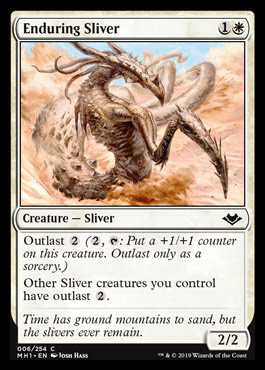 Mostly just bears with the sliver tag. Neither of these effects are what you want to be doing in a sliver deck and so these are mostly just cheap meat to fill up with. Too many good slivers in cube for these to excite in a 40 card deck but some potential in EDH to pad out the curve. Potentially some synergy uses too but not interesting enough to go into. 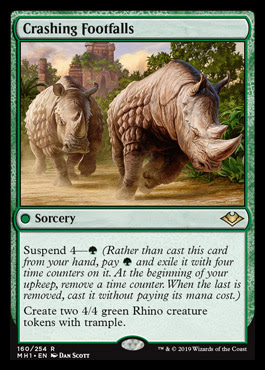 Interesting new tool to abuse with things like As Foretold, Electrodominance etc. Footfalls remains powerful at RR or on turn three and/or when it costs you two cards to play. It even seems fine as a thing to simply suspend. It seems comparable to Ancestral Visions in this latter regard and more powerful to cheat out. A pair of meaty token dorks do lose value as the game goes later. Trample is great on these big tokens but they are still on the vulnerable side. Lacking immediate impact is the mean issue with Footfalls. This is especially the case when you conventionally suspend it as your opponent has all the time they need to prepare. In a deck rife with effects that provide haste this is a lot better. The other big issue for this card is much the same as with Ancestral Visions but a little worse and that is simply that it is a completely garbage top deck. Draw this in the mid to late game and it frequently won't do a jot for you. This will make it appeal a little less to decks without ways to cheat it out. Blue is a lot better suited to handling dud draws than green is. Still, overall I think you can probably just run this in a lot of places. It is such a low investment with such a high payoff that why not! Far more games are won and lost with everyone still having action than go to topdeck mode. In a format where that is the case this seems good assuming the game is averaging over five turns, which again is a tick for cube. Good to combo, good to just play, and fairly fair in both camps. 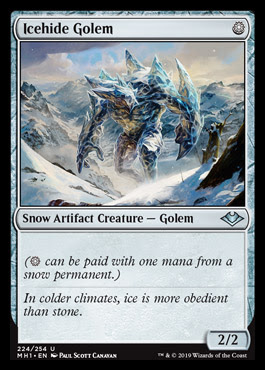 Nice little incentive card here. Totally safe to print as well what with all the best aggro decks in modern having such exotic mana bases, not to mention higher power level one drops. You need to be running most to all of your lands as snowcovered basics, or at least just the snowcovered bit, to run this in your list. That isn't a huge ask for the mono colour aggressive cube lists out there but I actually can't see me running this without having some artifact or snow synergy outside of a blue list. All the other colours can do better than this in house. If not directly so then with synergy or at least the freedom to play some more interesting lands. Sadly you probably want things like artifact lands if you are packing artifact synergies which makes this less likely to see action. Still, a one mana 2/2 with little to no drawback has never not seen play before. If this does in drafting cube it will be much like Rakdos Cackler. Suitable and playable filler  rather than actually all that exciting. 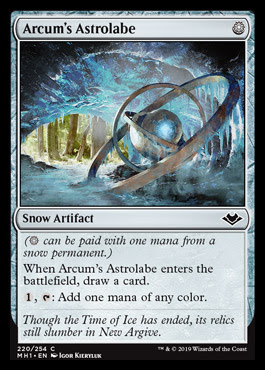 Prophetic Prism for one less if you can find the snow mana. Basically all the same kinds of stipulation apply as before with Icehide Golem. Awkwardly however this is a fixing effect which is not needed in mono decks and super hard to support in multi-coloured lists as dual lands are not so snowy. These kinds of cards see a lot of love in artifact combo decks but that buts up with the issue of artifact synergy lands also not being snow. Very cheap and efficient card that will still see loads play when mana bases allow for it. It will see even more if cost reduction effects work on it like Etherium Sculptor and Helm of Awakening. 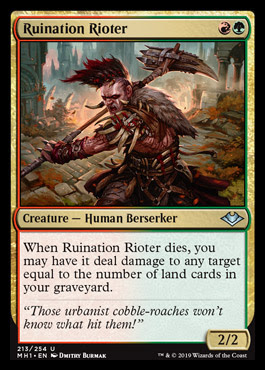 This has quite the wide range in terms of power. It can be a Grisly Bear or it can just win the game. This feels like it might legitimately lead to some self mill combo kills. Sadly this has a lot less hope in 40 card decks with them not having enough lands to support a kill from 20 in most cases. Rioter is not an all in card either as so many which have combo potential are. You can simply play this in a list with a load of sac lands or looting effects and it will perform very well. I don't think you can come close to doing that reliably enough in the drafting cubes to be worth it, even if it were not a gold card. In constructed formats however this has a world of potential. 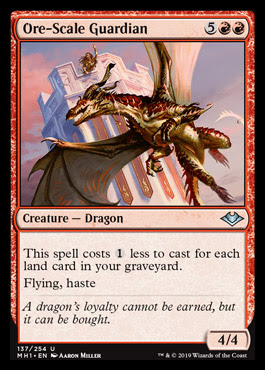 More lands in the bin matters cards which is a theme I like. This however is not the payoff I am looking for really. At two mana this is great and at three it is good depending on how much effort and time it took to get there. This at four mana is fine and there after becomes fairly poor. Unlike Rioter this has a very capped upper end. Unlike Rioter this has a shockingly bad floor. This is only playable in a deck that not only consistently has a bin full of lands but also thematically wants a 4/4 flying hasting beater. That is not really a thing as yet and this isn't an incentive to try and make it a thing. 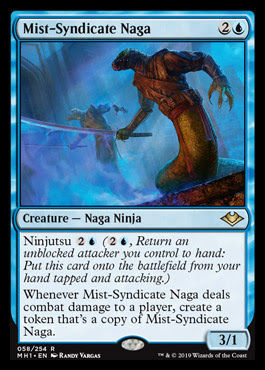 This can get out of hand pretty fast. I am reticent to call it the blue Rabblemaster but it is still the closest comparison on offer. This kills faster than any other blue dork on curve I can think of. This gets out of hand far quicker than Rabblemaster too, it is more like a Pack Rat in that regard. You need to get them all else they might all just spring up again! So this kills in a clean 3, 6, 12 damage output over three turns which is turn six on a ninjitsu play and turn seven if raw dogging. This is aggressive and dangerous and highly un-blue in that regard. A bit of evasion and protection and this is a really potent win condition. This will do more for aggro blue decks than most other blue cards. Blue is able to provide both evasion and protection with ease, it is the scary threats they have always lacked. The Naga should provide value fairly reliably if the ninjitu is supported well. All copies of this do really need clearing up and short of a few ideal cards like Forked Bolt, will require mass removal or a two for one. Failure to do so will just leave you open to dying to a swarm of these damn things. I am a little scared of this card. It looks pretty good and if it lives up to that then it is quite a snowbally card. I find cards that snowball tend to not provide the best games when they win. I think it is fairly safe to say that if two of these hit you at once or one consistently hits you for three turns that you are probably losing. Mass removal is often going to be the only answer to this you have that isn't too backbreaking. Imagine having to use things like Vindicate to kill a Naga token... vomit. 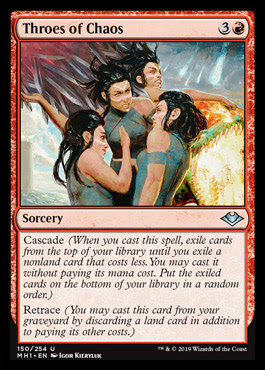 Lovely card design here. A very interesting way to allow for a deck to curtail floods. You can just build a deck that curves to four and play this and never have a dead draw (if you can find it in time!) It is similar to having all your lands cycling for one without having to invest any deck slots in it. There are some upsides to cascade such as Crashing Footfalls but there are also some drawbacks. You have curve considerations, reactive, conditional and situational card considerations and so forth. For the first reason alone you are actually much more like cycling for two or more mana than one. You can't just play three drops! This seems all too fair to just play it and I think will only get any attention when cascade is being abused somehow. In cube and modern at least, in EDH I rate this a lot higher as there is so much more time to ramp up your mana and then dispose of excess lands.