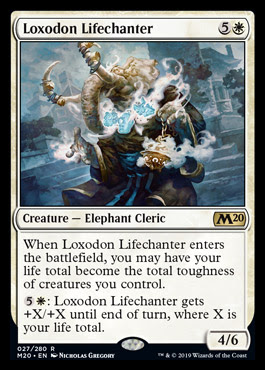 Broadly a terrible card but it does start to get interesting with a lot of mana, especially if you can use the ability with the EtB effect on the stack. I can see this making it into EDH lists for that kind of abuse even if it has no chance in cube play. This is expensive yet it fails at the two things it does in heads up play. Unreliable lifegain source and inconsistent threat. 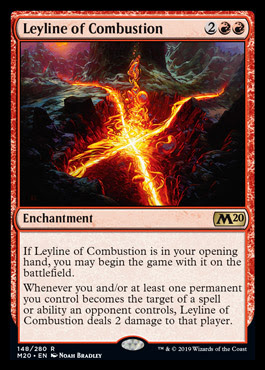 This is too unreliable to be used as any sort of damage output and the same applies for using it as a disruptive or protective tool. It is shockingly bad to play out normally and might well do nothing even if you do flop it out for free. Hard to rule out cards that play themselves for free but I fail to see where I would ever want this maindeck. It is at least a good counter to a lot of good storm win conditions although still probably not as good as something like Pyrostatic Pillar. 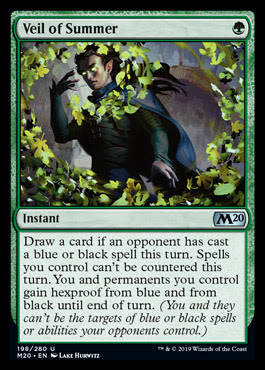 This does a lot for not very much but it is narrow even before we consider the colour limitations on it. You only get a card if a spell has been cast making it weaker than it seems as a way to force something past countermagic or to protect against abilities of things already in play. You only then get value if something of yours is being the target of something of theirs. I can see this in some sideboards but infrequently. As a green player I want to protect against mass removal far more than I do spot removal and this doesn't really help with that. It seems best as a counter to things like Thoughtsieze. I see this far more as a way to protect a combo than as something I would run in a midrange sideboard. This is the kind of convenient card you want to run main but can't due to the colour restrictions. As a sideboard card it isn't quite enough of a blowout to be an exciting inclusion. I want my sideboard cards to be massive and this isn't. Still, it does do a lot for one mana. Anytime you counter a spell and draw a card you are hugely ahead as a result. 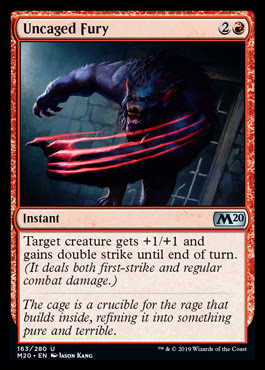 Powerful but you are almost always going to want cheaper versions of this without the pump and there are enough of those for most uses that this seems like it shouldn't get any cube love. EDH will be up for redundancy at this power level though. 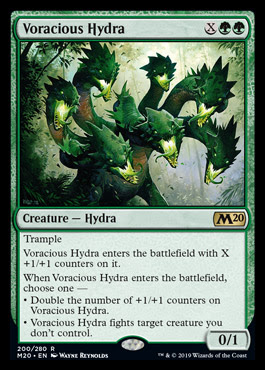 There is no value of X where this becomes good if using the first mode. It does at least halve the clock when you are in full topdeck mode but green decks don't often find themselves in that position. Having trample does at least make it a relevant threat but you are mostly using this and entirely including it for the second mode. This is a green Flame Tongue Kavu. You kill a creature and you get one back of your own. It is not exactly efficient at any mana cost although it does improve in that regard as you increase in X. Mostly I like this because green doesn't have creature removal and this is fairly reliable and fairly flexible. Mostly it will be used to kill off utility dorks like Grim Lavamancer. That is what green needs but because of that I do tend to overrate cards that can do such things. Especially the more recent printings of fight cards, all of which have sucked. The reason I think this might be a different story is the contained nature of the card. It isn't dead on its own nor does it open you up to eating a two for one. Mostly you will be administering the two for one. Being versatile, being removal and likely being a two for one together do enough work to offset the relatively low mana efficiency of the card. I don't expect this to be all that good or exciting but I do expect it to see enough play as it stands to remain in the drafting cube. 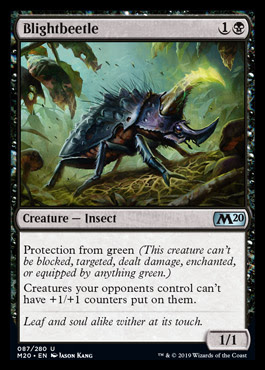 It looks like a one sided hoser but actually the one sidedness is a sneaky nerf to the card stopping it being another Melira style combo tool. All this beetle does is is really hate on certain creature strategies. In cube you are unlikely to come up against enough of those to make this even a board consideration. It is potent but the right time for it is so unlikely that I'll probably never see it  played in cube. In modern however it is brutal against affinity (especially Hardened Scales versions) and reasonable against humans. I can see it being an interesting option there. 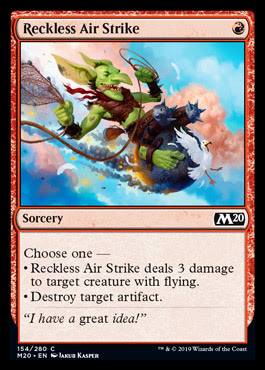 This is no Abrade. It is just too narrow on both modes. You want a narrow but desirable effect supplemented by a more all round playable mode. This lacks the latter. It might get some love as a space efficient sideboard tool but shouldn't ever be maindeck material. 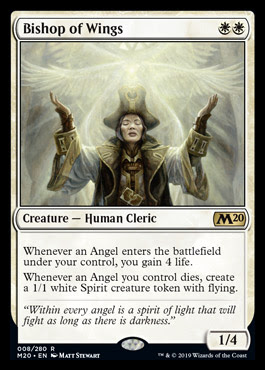 Tribal angels feels pretty imminent... This is narrow and not even all that well suited. Most angels shouldn't really need this kind of weird empowerment. You would be much better served leaving you angels alone and playing a good stand alone two drop. The Timmy bait in this set is strong. I know that this card is bad and the archetype it goes in is bad and yet I also know that I will one day build and play it. There is probably some dodgy convoluted combo you can run with this thing but the safe money is on it sucking too. 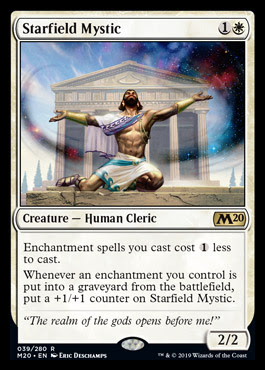 A white Herald of the Pantheon. While gaining life is better in enchantment based decks than getting +1/+1 counters having redundancy in the effect and/or a white option is going to count for more. This should see some fringe use in some fringe decks and it will do a decent job there. 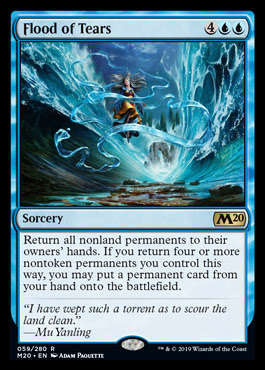 Well now this is an interesting card and no mistake. It can be used in a couple of ways as well. You can play it as you would a Crush of Tentacles just as a big board sweeper that has a decent chance of giving you a good tempo swing. In this capacity it is pretty midrange. You want to have enough things to trigger the Show and Tell mode and a big enough thing to make that a good payoff. It doesn't need to be huge, just a Rogue Refiner or Mesmerizing Benthid should dominate pretty hard. Planeswalker are good I hear too and the one thing you can't cheat out with Show and Tell. I fully expect to run this in builds just to get Nicol Bolas into play more easily (more Timmy bait). It is harder to setup for this Swing than Crush of Tentacles is but the payoff is a lot more impressive. An 8/8 token barely ever does anything. It is certainly outclassed by any random 4 drop in cube. Control decks might well play this if they are permanent heavy or desperate for a big sweeper. Aggro decks probably won't ever play this but then blue aggro decks are such a weird and varied breed it is hard to say that for sure! I don't imagine it being better than Crush in those cases at least. Midrange is going to be all over this however. It seems impressively swingy. Combo is the other place this has a good shot. With things like Through the Breach only costing one less than this I expect this will wind up somewhere. You can ramp into this on turn three in modern and flop out an Omniscience or Emrakul or whatever you want/have! While a touch pricier than alternative cheat out cards the board sweep goes a long old way to offsetting that cost. This is a personal Show and Tell or it is Crush of Tentacles for your building needs and when you play it you get both bits most of the time making it pretty brutal! 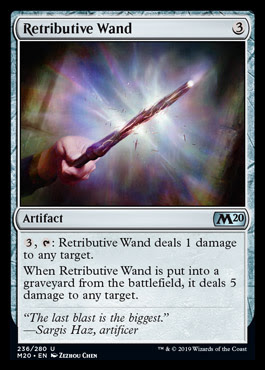 The ability is far too slow to be worth considering however just as a big Perilous Myr this has some application in artifact decks. Five is a lot of damage and when you have a need of artifacts the value goes up a bit. It is like draw half a card or something nearing that approximate value. Very dangerous with Goblin Engineer. Narrow to the point of barely even having one home but it should be good when it gets there. 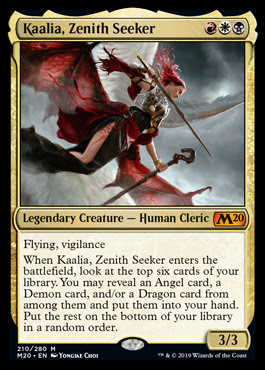 Much as this is another Timmy bait card it is also pretty powerful. You don't need a high hit rate on this at all before it is looking really strong. The base stats and abilities are so good that even with 0.5 cards drawn per cast I think at the very least it makes it into standard. The casting cost is a big barrier to drafting cubes but in any sort of constructed setting this will be very playable. I obviously also want to make a deck where this has a decent chance of hitting at least 1 card per play. The hard part is not the hit rate but making the rest of the deck not a total dud!