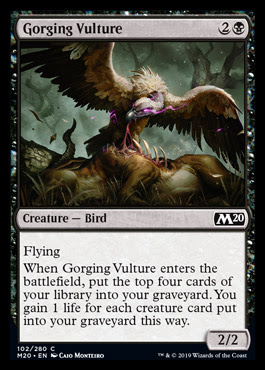 Self mill is useful but this is just too low powered for a three drop. It is an OK mill trigger and a passable body but it had to do better on one of those aspects to see much play. 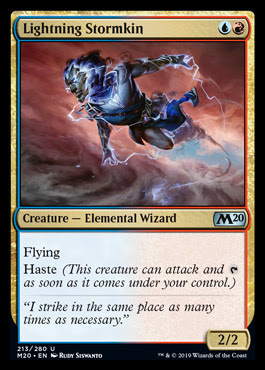 Potent but not worth putting into a drafting cube. Not only is Stormchaser Mage almost always better but two drop efficient beaters turn out to be a real waste of valuable cube slots, even a waste of slots you are willing to give to gold cards in general. This is just a card you are happy to play in an Izzet aggro deck, it is not a draw to the colour or a bomb or something you can't get a comparable copy of in a single colour. This is potential for both tribes it ascribes to. Simple, powerful and efficient but nothing more. High quality filler. 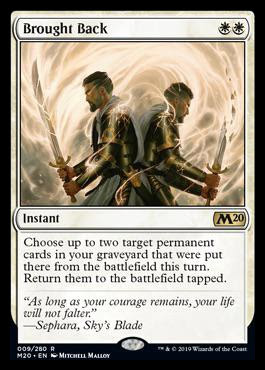 This seems overly situational. It is an OK way to undo some of a mass removal spell or otherwise brutal turn. Mostly I think a protective card, a value card, a threat that limits exposure to removal, or even a combat trick will do more for you than this. You can't even abuse it with silly things like Black Lotus that easily as they return tapped. That is certainly the only kind of place this will get any love - a combo deck of some exotic nature.It does have some nice interactions with basic lands and will likely see some play as a (double) Rampant Growth in concert with sac lands or Ghost Quarter Flagtones of Trokair combos. In cube this will be cute and afford relatively low payoffs but in something like modern where you can play a good number of these support cards then Brought Back starts to look pretty impressive. 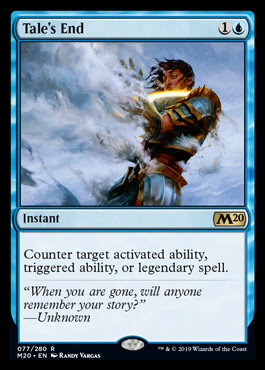 Stifle for one more that can counter something legendary. Alternatively Disallow that can't counter any old thing! Stifle is too narrow for the drafting cube and Disallow is expensive for what it does regardless of the mode. Being in between two decent cards that fail for different reasons certainly looks good for this rather than bad. My cube has a little under 15% legendary spells. If going from countering 0% of things to 100% of things isn't worth 2 mana then a 15% improvement is unlikely to merit 1 mana. Unlikely but not impossible. When you are looking for a balance the raw numbers going in matter less, it is the product of them that counts. Put simply 2 and 10 are more than 3 and 7 added up but less when multiplied. This logic indirectly applies to magic in a contextual sense which just means you can't rule out Tale's End just because it seems less efficient. Ultimately I don't expect this to last in the cube but it is interesting and test worthy for sure. The percentage of legendary cards is rising in cube over time and so perhaps one day this will broad enough. Ultimately for now it is just a card that doesn't do enough, enough of the time. 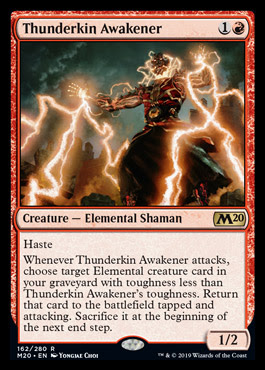 
Well this certainly makes a Ball Lightening, or better yet the new Blightning version, quite the beating. Turn one Looting, turn two this and in for 7, perhaps with a Mind Rot to boost and threatening the same each turn there after! Brutal. Not nearly enough support for this in a limited setting but build around and this will do work. Probably good in most elemental builds as well as having a build specifically for him as well. You don't even need a stats boost for this to be impressive. 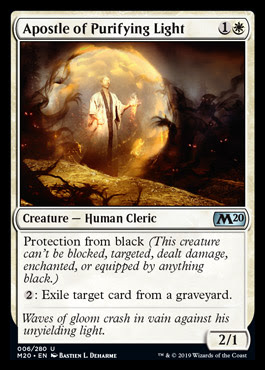 After Remorseful Cleric proved a failure as a graveyard hate card in cube I learned more what you want from such things. The issue with the Cleric was that it was rarely worth your card and two mana to disrupt the bin. You want to have ongoing access to graveyard disruption that doesn't cause you card advantage. Scavenging Ooze is perfect and Cleric is bad. This is more like the former. It costs more to do and rewards you less but then white quite wants access to graveyard removal so it might well run this little dork. Prot black is not the security I really want on this card being polar and uninteractive. Even pro red would have been more suitable to cover the low toughness. At least black is infrequently played as mono giving some hope of an out to this thus making the protection a little less tedious. It is a very low powered card but it does a job in the way it needs doing and it does so better than any other white alternatives. Close to the mark but certainly potential. 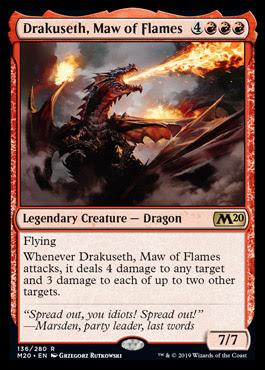 Inferno Titan turned to max! If this had any sort of EtB effect (or haste) it would be a strong contender. Needing to get an attack in means this is only getting love in places it will get haste, and being a seven drop also only in places that can cheat or ramp him out as well. Attacking with this is made of winning however. It should safely wrap up a game in two hits and generally put it out of reach in one. I like the trigger way  more than annihilate 4! 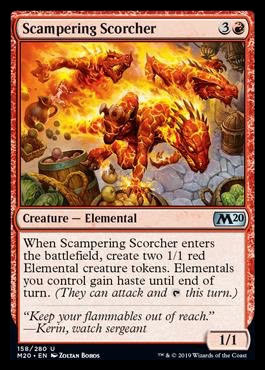 Lots of tokens, a bit of haste and a real body to recur or flicker for more going wide value! Sadly this is a support card and as a four drop that makes it quite hard to fit in. It might make the cut in some elementals decks but I can't see it outperforming even the lowly Goblin Instigator in a general setting or even a token themed setting. 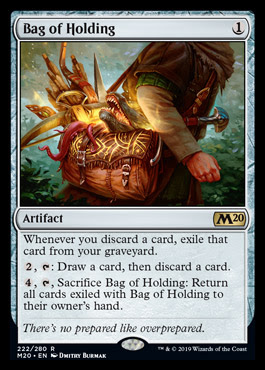 A cheap artifact with a loot ability for two mana and a potentially big card draw one off use for four mana. This is a lot to loot with but it is still pretty good as far as a colourless looter goes. The real issue this card has is that it doesn't work like other looters for most of the things you want looting for. If it is purely card quality and draw then this is fine but if you are trying to empower delve or threshold or something then this is no help. Indeed it prevents anything helping you do that! On the flip side you can use this with cards like Burning Inquiry and Goblin Lore to exile a load of cards and get a huge amount of draw for relatively little cost. Seems like too much work just to draw cards. Certainly interesting and offering rare utility but for the most part this is just a little clunky, risky and unhelpful. 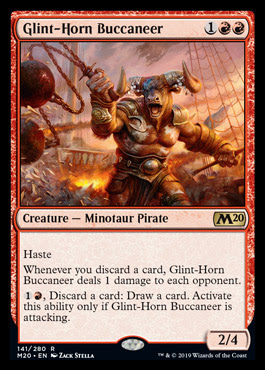 The activated ability is pretty poor on this which makes it look quite weak. I think that is deceptive however. You could take that away from the card and it somehow looks a little better despite being far far worse. This is a 2/4 haste for three with a passive damage trigger. That is aggressive, something you can synergize and scale with, it is pretty efficient too just as a body. You can just flop this out and do some beating down and it will be pretty good. Toss in a bit of looting from other sources and it starts to get scary. The activated loot is repeatable as well so you can get yourself a four mana Faithless Looting and a bonus two damage the turn after making it which isn't nothing. You can sit back and just use other loot, discard,  and rummage effects to wear down. Save up mana and go for a big card dump in a chump attack. Pretty versatile considering. Red has so many three drops of really high power and this is a bit all over the place. Part aggressive and part defensive. Is it a midrange card? Who knows! Testing will help with this oddity of a card. Certainly got tribal potential if it fails on other fronts. 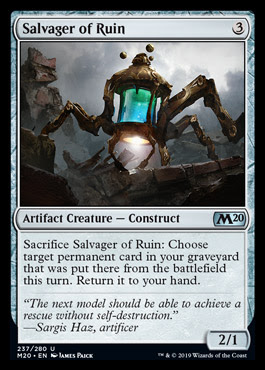 I am sure this has some uses in combo decks. Recursion effects always seemt to. Seems quite pricey and less easily abused than a Junk Diver but at least it can be used without needing a sac outlet. It certainly isn't a help in an Ironworks build! 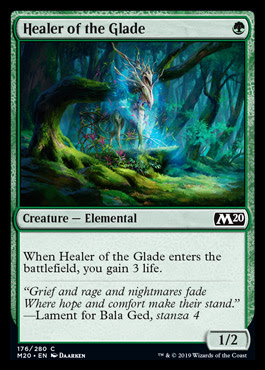 Potential elemental tribal tool or anti aggro hedge card. Far too low power and too narrow for the drafting cube so a double fail for that but I do expect it to pick up a smattering of play in the singleton constructed formats. An odd one drop but the value of the sum of it's parts is high. 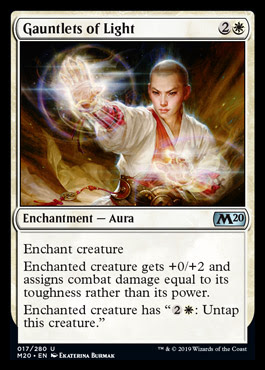 Mild potential in an infinite mana combo and perhaps even a cute supplement card in a Doran build. Probably just playing a tutor for a global effect however.