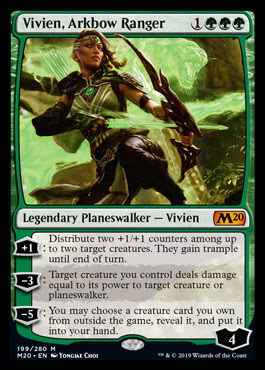 Powerful but critically hampered by needing a creature in play to do anything at all. The Living Wish mode being costed like an ultimate is a problem and likely an overreaction to the power of Karn, the Great Creator. I think it could have been -3 and Vivien would have been decent. It would mean you could flop her out and do something useful regardless of the game state. Living Wish was fine at two mana and finding lands. This is green and green does tend to have dorks in play and so this will mostly do things. The fact that it is fairly powerful should help with the conditional downsides. Counters scale well and gaining trample is very potent when growing dorks and trying to threaten other walkers. Mana dork, random three drop dork, then Vivien should be able to win a lot of games without anything else. Removal is also a big pull to this card. It is why Garruk Relentless sees most of his play and Vivien offers it in a mostly better way. This is right on the line and very much needs some testing time to establish if it will join the drafting cube ranks. It might be a staple, it might be too awkward. 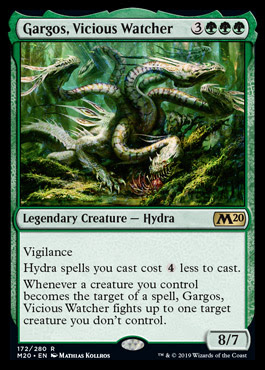 Cute, a hydra lord! No use for this in cube but I am sure there will be many happy EDH players. 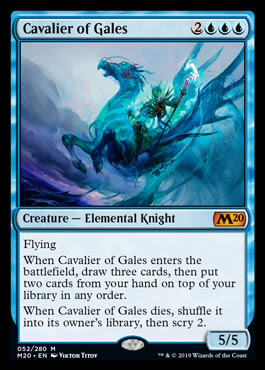 Five mana 5/5 flier with Brainstorm as an EtB takes a massive dump all over Riverwise Augur! Toss in a scry 2 on death complete with a prior reshuffle and you have quite the neat little card. It is loads of card quality, decent value, and reasonably worth having. A 5/5 flier does work! It is somewhat of a recursive threat too. I like it more than Kefnet for the drafting cube that is for sure. The value is more assured and that is a big part of why these cards are good. You get a decent tempo boost with this without costing you cards. This can be played in most heavy blue decks and be reasonably suitable. One of the interesting quirks of this card is the gamble on when it will die. With Brainstorm you will often hide a card in the relative safety of the top of your deck. If you do that with this then you will potentially lose it should your opponent kill Cavalier and force a shuffle. On the flip side, Brainstorm will often lock out your next two draws in cube when you fail to find a shuffle. Cavalier has a somewhat built in shuffle. One final big use for this card is in Vanifar / Pod decks. In singleton you need the specific cards in the library and drawing them can be a real burden. Having Brainstorm on a creature with an EtB is a massive help with this. Having good options like this and a range of CMCs is even better! This card will see a bunch of play in a bunch of places. It isn't silly power or anything but it is strong on that front as well as very playable in terms of archetypes. 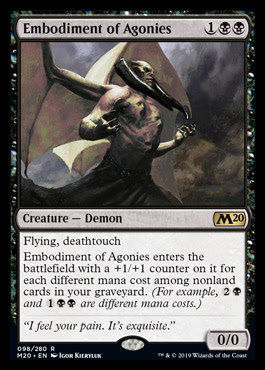 This is probably really good but I don't have much love for it. The deathtouch means that even if it is small it still has relevance in the late game. It is pretty easy to make this huge as well. Even on turn three you could easily have this coming out as a 5/5 and well over a 10/10 late game. While this is easy to do you do need to actively do it. You need mill, discard and looting and you need to pay attention to the spread of your costs. This is probably great in an undergrowth build akin to Hogaak decks but they already have tonnes of options on generically undercost fatties. I think this is too much work and too narrow for drafting cubes and not quite exciting enough for most singleton constructed uses. A card I should at least build with a couple of times to give it it's dues. 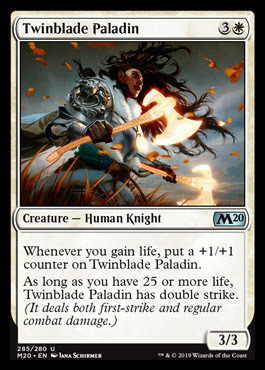 I might play this in a Pridemate style deck. It isn't great but it is on theme and packs a punch. What I don't like is the powercreep in these starter kits. Thirsting Bloodlord is another one very close to the mark. There is no need of a vanilla 4 drop vampire lord in 40 card singleton but I suspect you need one in any vampire EDH deck and at that point it feels like a price gouge. Either make these products actually good in terms of power level or just use exclusively reprints. Seems like wasted design efforts otherwise. Carrying on like this we are going to find a good or important card wind up in these products and lots of people being really unhappy about it. 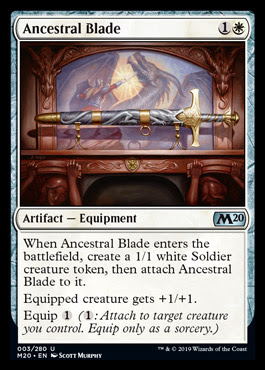 It is a Bear, it is Leonin Scimitar. While incredibly fair looking I think this is actually really good. It is cheap and kind of like a two for one. It is also two permanents in one cheap card which some decks care about, an artifact synergy card which others care about, an equipment which another subset of archetypes have interest in and so forth. Even just as an EtB effect card there is some merit to playing with this. Initially Ancestral Blade isn't very exciting but it is cheap and proactive and gets on with the game plan. The only real advantage it has over a Bear early is that you can get stuck in with it quite happily without risking card disadvantage. It is also a bit like a Scrounging Bandar in that you get to reallocate the stats if you want. The mana cost to re-equip makes this tempo poor early game but the potential for countering your opponents board offsets that rather. Being able to scale it with other effects like first strike or flying is nice. The Blade will do a lot of work over time making your dorks more efficient and forcing through damage you otherwise could not. I think this is a truly exceptional support card for cube. It is more relevant as a play than Flayer Husk, more useful as an equipment in an ongoing capacity and immune to being entirely removed with a single Shatter effect. This card isn't powerful but it is suitable, great at scaling with things and even better at empowering other cards. It is an enduring early play that offers incremental advantages there after without costing you much at all to do so. 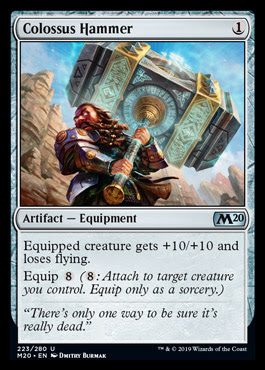 Rather silly as far as things go but with any sort of cheat on equip costs this starts to impress a lot more. Also only being a one drop to play makes this a perfect tool to pair with Puresteel Paladin. Obviously awful if you are not abusing this in some way with synergies and thus very narrow. Fun none the less! 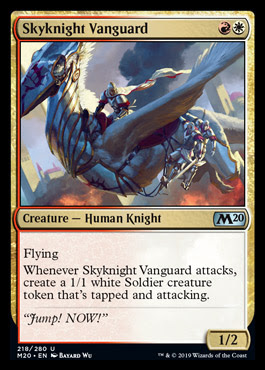 The Aetherswooper with unlimited energy supplies!  Kari Skyzev. This is good but it is very polar. On the play uncontested and unanswered this will win a game far more impressively than most other two drops going solo. Mid and late game this will just send soldiers to die if it can even attack itself. The real comparison for this is to Precinct Captain which is a potent cube card that does much the same sort of thing. This has to be better what with being gold but it doesn't have to be much better what with Captain being great and also a WW two drop which is a narrowing element in the same lines as being gold. So a 1/2 flier is worse than a 2/2 with first strike but not when they have attacking triggers. Triggering on attack is obviously a lot better than on combat damage to a player. The tokens coming in attacking is occasionally good for damage output but usually bad for value generation. It is looking good for Vanguard at this point. What really breaks it is when paired with synergy cards. Something like Purporos or Goblin Bombardment suddenly make Vanguard far better than Captain. Captain struggles to make the tokens late game and when you just care about the triggers they can offer rather than the amassing of tokens it makes Vanguard great and and Captain a dud. Skynight offers better scaling and is more reliable in that regard. Seems like enough card to make it in the drafting cube. It is certainly themed and powerful enough to be in any Boros token builds you could construct. 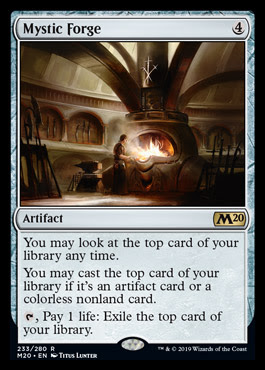 Oh my my. This is danger. I am not sure this has been thought through properly at all. The odd cantrip and a bit of cost reduction effects and this is just a one shot wonder. This will be a mainstay in Paradox Engine decks. It might make a new colourless Aetherflux Reservoir and/or Paradox Engine storm deck. It could be pure filth in a land light shops deck in any eternal format. A really good job Ironworks was banned but quite possibly not enough to stop this. Obviously only a build around card but one of the scariest of such I have seen in a long time. 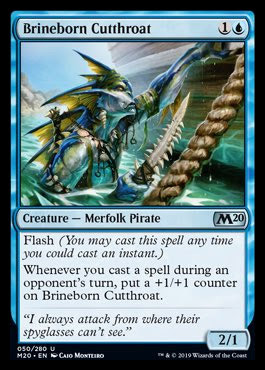 Good enough to make many fish and any pirate builds. Not however good enough to make it in the cube. It is unsupported in terms of generic ground based aggro in blue. It is slow in that it isn't growing fast enough and it isn't doing anything impressive beyond slowly becoming a mana efficient threat. Probably better in a control deck in the drafting cube than anything else which doesn't bode all that well for it! It looks like a lot more card that it is.