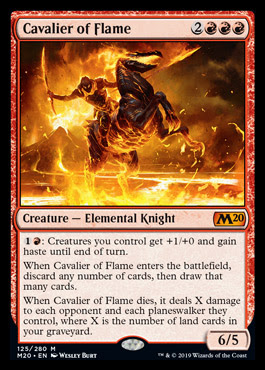 This is a whole lot of card. It is powerful, flexible and covers a lot of bases. A 5 mana 6/5 is OK as a starting point although with triple red in the cost it is a little restrictive. The activated ability means you can surprise people with it once you hit the seven mana mark and generally means it is a fairly dangerous card to leave lying around in play. Follow this with any sort of token generator and it is going to be really filthy! Seven extra damage on my Pia and Kiran Nalaar for a total of 18 in one hit over the two cards. Punchy to say the least. The unlimited rummage triggered ability is nice. It supports the other triggered ability somewhat and also gives you better odds on a busted followup play such as the Nalaar parents. Mostly it is going to be quite a small rummage, red doesn't have many cards by the five mana mark in most cases and you are only pitching the duds. A very strong effect in general but a minor one in terms of this card and how late it comes. Lastly we have this X damage which is pretty scary. It is redundancy for the Rioter just spoiled in Modern Horizons. It is generally going to hurt a bit and can hurt a lot. It will always make planeswalkers rather worse against it and will often make it a card you cannot easily kill without killing yourself. This is an odd card but it feels like there is just too much going on at too high of a base power level for it not to be good. If it gets play commensurate with its power then it should do well in the drafting cube. I fear the combination of it being a little aimless at the top of the curve and being restrictive on cost mean that it won't see a tonne of play. 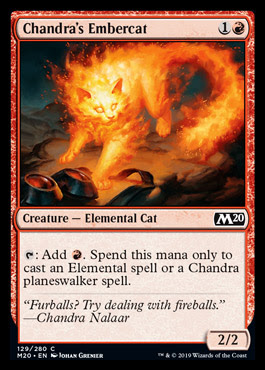 Tribal card that has at least two homes in elementals and Chandra builds. While fairly potent in both I suspect that neither are going to anywhere near top tier rather capping this cards potential. 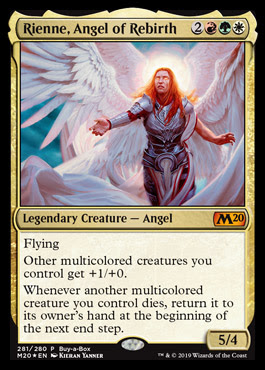 Very gold in poor colour combos while being top end and narrow. It isn't even that powerful compared to cube five drops. 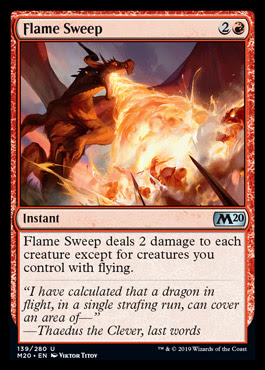 A fairly cheap low end sweeper that has three big things going for it. Single red makes it nicely playable. Instant speed makes it far more powerful and being able to miss just your own fliers makes it something you can build to abuse. While red sweepers seem decent they see less play than I feel they should. I have only a couple of the best in the drafting cube to align with the demand on them. This seems up there with the good ones but probably isn't overly needed. Raw numbers seem to be the most important thing making Pyroclasm, Fiery Confluence and Sweltering Suns win out on those fronts. 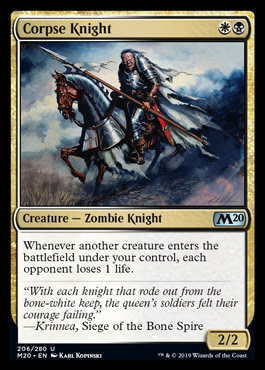 This puts out a lot of damage in cube and probably needs dealing with as soon as possible. It is a far more proactive version of Cruel Celebrant. You might not gain life but you get a better body and you don't need to have stuff die for it to trigger. This means you can apply life pressure while building the board. This is great in an Aristocrat style deck but it is also great in any sort of generic go wide deck too. Great creature types as well. It might be a little narrow being a gold card that needs a creature heavy deck but it is not lacking in power. It is obviously a lot worse late in the game than cards like Cruel Celebrant as you miss triggers on things having come into play already. It is not a replacement for such a card, just a good way to support those cards by being a good early play that applies pressure well. 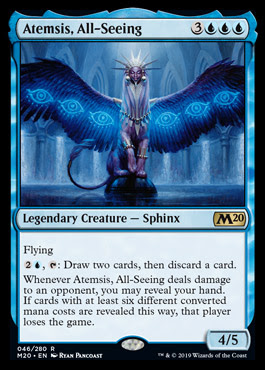 While this is a bad card it is an enticing one. I want to win with it! The Timmy in me wants to show my spells and make people lose. This is bad because it is a 6 drop with low stats, bad abilities and no immediate value. Walk this into a Doom Blade or a Remand or really any sort of disruption and it is a huge setback. It can't even really handle on board defenses either. It is certainly going to be a lot of work making this connect, let alone setting up your hand. Somehow this is something I take as more of a challenge than simply evidence that the card is awful. 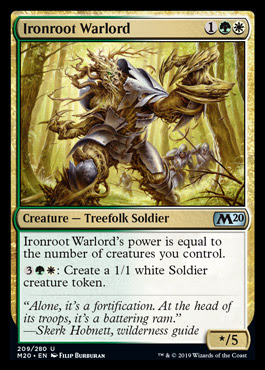 Powerful but not enough so. While this will average a good 3/5 statline it is not as reliable as you want your generic big dorks to be. Early this is rarely more than a 2/5 and the average is brought up by those big late game stalls where the 10/5 nature of this is less relevant than the token production. As a token producer this is slow and inefficient. Give me an Ant Queen any day. Give me a Guildmage for that matter. The only place I see this getting any love is tribal treefolk. 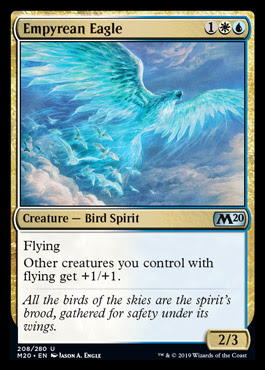 This is a Thunderclap Wyvern for one less mana just for the loss of flash. As such it is a most impressive lord and quite possibly pushes the Favourable Winds deck up a tier. There has been a lot of support for that style of deck coming out of late with Serra, the cheap Overrun for fliers, and a bunch of high quality cheap fliers as well, many of which have good scaling abilities like lifelink. A 2/3 lord for 3 is usually decent and this one has flying thrown into the mix. I don't think a skies deck is quite top tier yet but it is certainly on the rise and not all that far away from the top either. 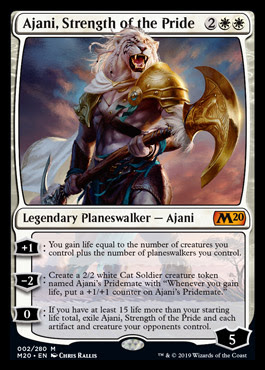 Ajani, Strength of the Pride 5

An actual lifegain themed Ajani at last that can be usefully aggressive with a life gaining ability! Ajani Goldmane failed as a walker simply due to having too few worthwhile things to be getting on with. Really it is just a bunch of +1/+1 counters and vigilance. That is great when that is what you want but being all it does it can be a dud which is really not what you want from walkers. This Ajani however is a much more rounded and useful card. The +1 feeds into the -2 and the 0 greatly increasing the value of gaining life even when you are under no pressure. There is plenty of power behind this walker but it is all a little bit on the slow side. Going to 6 loyalty and gaining some life is OK but it is the kind of tempo devoid of value. It isn't defending Ajani and unless you have a significant board or other immediate lifegain synergies it isn't all that exciting. The -2 is powerful but it takes a while to get going unless you have something like a Soul Warden in play already. Just having a 2/2 token and a 3 loyalty walker is pretty bad at four mana and really needs your things to survive rather longer to bear fruit. The ultimate takes a long old time to get to and really needs you to have done other work towards those ends, either by having a massive board or by having other lifegain effects boosting you towards 35 (or whatever) life you need to have it work. A one sided Wrath at four mana is nice, toss in a Shatterstorm and exile effect and it looks even better. Most of the power in this card relies on you making Pridemate tokens and having them grow. Tokens are rarely what you want to invest in as they are so easily bounced and flickered out of existence. I would much rather be using the 0 on Ally of Zendikar to churn out 2/2 tokens. It is safer and should end the game quicker. I like this card and think it is well designed and appropriately powered. It will be the go to Ajani, and planeswalker for that matter, in any soul sisters or lifegain themed deck where it will be exceptional with all 3 abilities being significantly more impressive. I however don't think it challenges the more rounded and powerful planeswalkers in white for a drafting cube slot. Good but up against some exceptional competition. 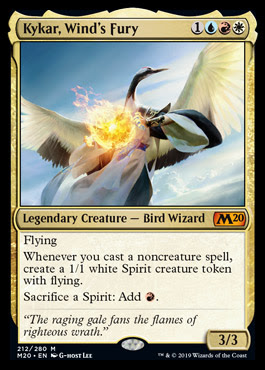 This is not all that dissimilar to Emeria Angel. Prowess is a lot easier to support and scale than landfall but then mono coloured cards are a lot easier to support than three colour ones! Baseline I much prefer Monastery Mentor to this however the sac outlet to produce mana is most interesting. It gives this a lot of potential outside of conventional builds while also helping it out regardless of the deck. I expect this will be some top end redundancy in Jeskai prowess decks and might well fit into some combo lists. Three colours just about rules it out for being playable enough for the drafting cube but it is close. Being a legend in the prowess colours this will be the perfect commander for decks themed as such. 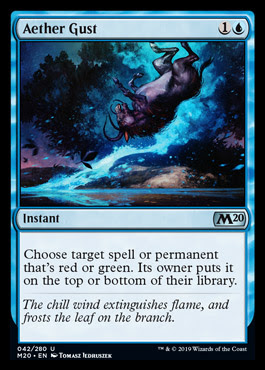 Impressively potent hoser card that is not far off the power level of the Elemental Blast cards. It costs a little more but has twice the range in terms of colours. I expect to see this in a lot of sideboards going forwards. It is more powerful than Memory Lapse as a counterspell and better than Unexpectedly Absent as removal and it does either as you need! One of the most pushed hoser cards I have seen in years. 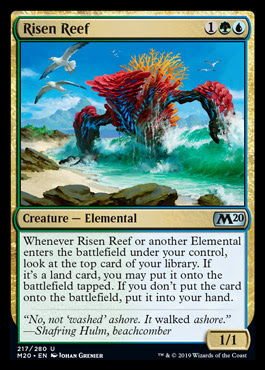 Coiling Oracle for one more mana than gives the EtB effect to all subsequent elementals. Too weak to play in isolation but a little more interesting if you can fit it into a tribal list. Still a bit of a gold 3 mana 1/1 so not any sort of lock in even in an elementals build but an interesting option at least.