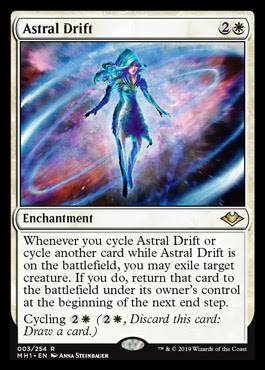 This set performs admirably in nearly every way. Great design, high power level, lots of interesting new toys, high inclusion rate for my cube set of cards and those I draft with. Such a high inclusion rate in fact that I would have been significantly better off had I just listed the cards I wasn't interested in picking up! To handle this new volume of cards I just listed them according to how I rated them out of 10. To convert that in to the normal brackets I give we have the lock in cards from 7 and up. Things to test will be from 4 and up and the rest will just be the exotic reserves.

Modern Horizons has so many powerful cards around artifact themes that they may well cause a significant meta shift in cube requiring a fairly significant rebuild. The power of Urza along with Mirrodin Besieged and Goblin Engineer could well lead to a new archetype which in turn will up the value of a load of support cards for that and have a marked effect on the cards in cube. The last time this happened was in Khans block where strong prowess and delve cards sufficiently pushed those support cards that things like Mental Note became cards people wanted enough to make for good additions to the cube. I can see my putting a lot more Ichor Wellspring type cards into the cube if these new offerings prove too potent to omit. It is not as if we don't already have a lot of great artifact matters cards out there to help Urza create a demand for artifact support. The same can somewhat be said of many of the mechanics in this set. Horizons is so pushed that ninjas or land themes and so forth might well creep into the cube.

Horizons is exactly the kind of set I have been after for ages. For too long the only time we would get pushed cards that impact the cube are from Commander sets. Those only offer a small number of new cards and so many of those are tailored to the needs of EDH that they are a lot less use for heads up play, both due to the speed difference and the functional differences in how a card works heads up compared to in multiplayer or with bonus rule sets like the command zone. Horizons is full of the "bypasses" standard power level but framed in a conventional heads up manner. As such it has at least ten fold the value of a Commander set in terms of exciting new cards for cube without bringing any of those tedious and annoying cards like True-Name.

I want to be more excited and grateful about Horizons but I have one massive gripe about it which I have alluded to already in the comments section of this set review series. That is the pricing. I feel like I am being taken advantage of with a pricing structure of at least double a normal standard set. It seems to be more like a 250% increase in sterling, not sure if that translates the same in dollars or euros. It feels like Wizards justification for this price hike is simply the power level. These cards are more powerful and thus worth more. You will need them for your modern decks, EDH decks and cubes and so you will buy them. This is a very dangerous precedent for Wizards to set. Modern Masters sets reprinted cards with significant value due to the play they receive. They had to be priced up so as to protect the secondary markets but it wasn't a problem because the value from packs was guaranteed to be higher. The reprints in this set are lower value cards to begin with and are more likely to go up than down if they prove good in modern. The new cards, while powerful, are not assured value with years of consistent performance to underpin their price tag as with the masters sets. Prices on Horizons cards are fairly even at present while the meta isn't at all established and simply reflect the higher product prices. As modern adapts we will see some cards tank to normal lows with the few cards seeing modern and other format play spiking way higher than usual. The rare land cycle will help spread the load but I fully anticipate a couple of rares and mythics fairly quickly representing the bulk of the EV from a box. I really wouldn't be shocked to see $100 cards while the set is still in print.

The only power I have to avoid giving Wizards incentives to hike prices or over escalating power creep is to not buy into this product on either the primary or secondary market. That leaves two options, not play with the new cards or using proxies / fakes instead. If this was normal booster/box prices as per a standard set I would have bought at least one box. As it stands I have no clue what I plan to do. All I know is that it already leaves a bad taste in the mouth whatever it is. I might even have been OK with the extra price if they had made an announcement about it claiming the prices reflected extra development and design time. I would feel better about getting ripped off then at least. What I find most surprising is not that Wizards have done this, this is just what monopolies do. It is the acceptance of the community. I have seen no other noise about this and even a load of people saying they think it is good value or reasonable. With that in mind I think we can expect far more price hikes in conventional product and special products with arbitrary prices even higher like this. This set was a good way to help make modern a more accessible and affordable format but instead feels as if it has been used as a cash grab.