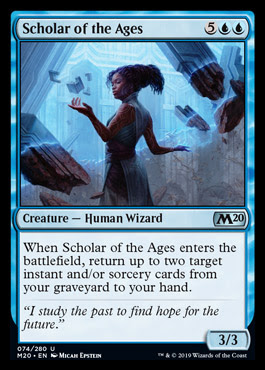 Scholar of the Ages 1

A powerful effect on a prohibitively expensive body. This will only see cube play in decks than can cheat on the cost in some way. There are plenty of loops you can do with this but only those that can be done for free have any real chance outside of EDH. Trying to use a seven drop for value generation is not a winning line in heads up play. 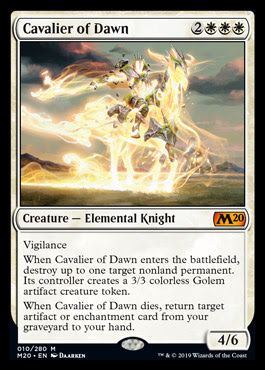 This is like a mini Terrastodon. You can either blow up a thing of an opponents and have a 1/3 stat advantage or you can blow up something of your own and have 7/9 worth of stuff. This is impressively versatile as a starting point. The vigilance means that the first mode isn't too much of hindrance to your 4/6 as you can safely attack into the golem and hold it off at the same time. The latter lets you really apply the pressure. Not being able to hit lands makes it a little harder to get the 3/3 yourself without it costing you something you care about. The on death trigger to get back an artifact or enchantment is nice value but it is fairly narrow. Sometimes you will have a Jitte in the bin your opponent can't afford to let you have back but mostly it will be without a target. This compares closes to Angel of Sanctions and while this had more power and versatility in many ways I don't see it getting more play. It is awkward to include and play the Cavalier, the bodies are harder to make use of even if they are bigger, and the card is generally just less streamlined. I don't see this making it in a drafting cube over cards like Sun Titan or the Angel. Decent power but mediocre suitability. 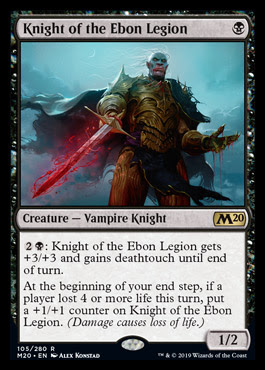 Knight of the Ebon Legion 6

Lots of things going on in this little one drop. It might well see some tribal play in either of the tribes it has on offer simply for being a reasonable one drop. It might even see some +1/+1 counter archetype play but probably not as it doesn't begin life with a counter as the best cards for that kind of plan do. So what of the other two abilities? How much do they improve the card and do they make it enough better than Devoted Hero to see play? They both work with each other a little to improve the other but not so much that it is gaining significant extra value. The counter gaining is the better of the two but it is also the narrower. If you drop this and Snuff Out their Elf then you are really far ahead. If you drop this and it stays as a 1/2 for the next couple of turns then you are likely behind as a result. It is hard to pay four life or make others do so, especially early when you most need to do so. You need at least one trigger for this to be good early and more like two triggers from the midgame onward to have this be sufficiently relevant without leaning on the pump activation. It is not so exciting that you can warp a deck around empowering the lifeloss component and thus it is seemingly too unreliable to impress. It can only trigger on your turn as well which reduces the value of things like Snuff Out. It also prevents you milking it for two counters each round of turns and having things get out of hand fast. If this is a 3/4 on first attack and a 5/6 on the second the fact you have put yourself to 4 is rather less a concern!

So does the pump remedy this card? It makes it a pain to get into combat with that is for sure. If you don't block it then it might grow itself and hit for four. If it is blocked then deathtouch is going to hurt. It is mana intense but still very awkward. Most of the time it will not be blocked in the midgame. It is in the late game this card actually starts to look at its best. Early game it is just too hard to grow. Midgame it is too mana intense to have it do that much for your tempo. Late game however this is an impressive mana sink. It is what Nantuko Shade wishes it was. It is a much better starting body and much easier to play and pump in multicoloured decks. It hits hard and needs removing. While it is very good lategame compared to other one drops it is not good late game compared to a good late game card like Scarab God. You have to be playing this for what it does for you throughout the game and I fear it will slightly under perform in the early through mid game.  Given that this has so much going on with a reasonable starting point for a one drop I expect it to perform well enough to last in the cube. One drops are just in such high demand. While aggro decks might have enough those that are playable in midrange decks are harder to come by, especially in black. This gives Knight a good shot of getting a lot of play being viable filler for aggro decks and potentially decent in midrange. I am impressed with how well balanced and hard to unravel this card seems to be. That is a super hard target to hit with a one drop as you have so little room to maneuver. I can't think of the last time a one drop left me unsure of how it would perform. 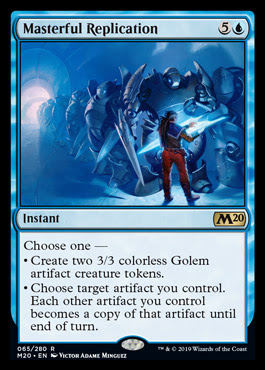 Instant is lovely as are modes but a pair of 3/3 tokens is not the return I am looking for on my six drops. The other ability can be more powerful but it is super narrow and still not exciting at six. 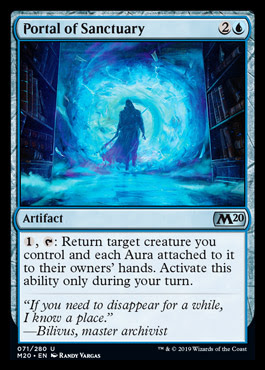 Bad Crystal Shard is bad. Really bad. Terrible for protection and trickery and savagely bad for tempo concessions. All this does is slowly get value if you have an EtB effect dork. 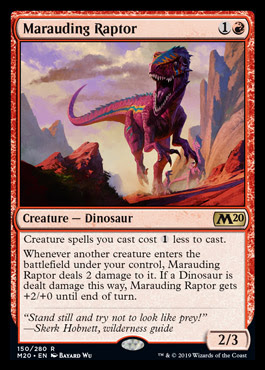 This seems pretty strong all told. Most cost reduction cards are pretty powerful and this one has upside you can abuse. A 2/3 for 2 that reduces creature costs by 1 is pretty darn outstanding in any sort of zoo or midrange deck. While it might shut off creatures with two or less toughness it isn't super hard to build around that a bit. You don't have to only play high toughness dorks either, just draft, build and play with it in mind and things will be OK. If you have enrage effects, on death effects, or just some other dinosaurs you can milk the Shock trigger even harder. I suspect this will be a mainstay in multiple themed decks. As for cube play I am a little more wary as there simply not very many cards in red this really works well with. A lot of the things above it in the curve make tokens and fully die to the Shock. Great card, great design and a real boost to some archetypes. Potent enough to have a chance in the drafting cube even if only a small one. 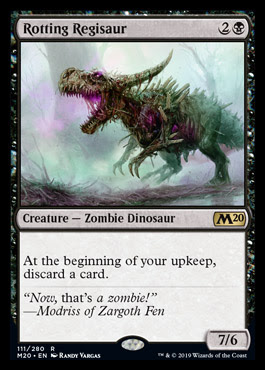 Massive! This is a cool card that certainly has some homes available for it. I don't see it working out in the drafting cube though. Big dorks are just not what you want. You would have to make the discard an upside to make it good and you can't reliably do that in the limited cube settings. I can see this in some zombie decks, some dinosaur decks (ones that can give this haste), and some graveyard themed decks. I can even see this in some suicide black decks where you will not have cards in hand to pitch by the time you flop out your three drops. What makes this card bad is not the discard trigger in upkeep but the lack of trample! 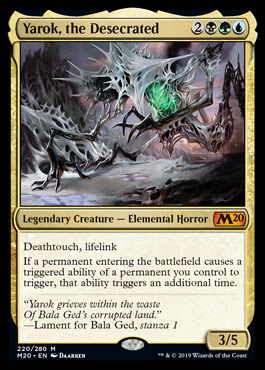 Super cool commander option with lots of power, interest and build around potential. For cube this is nearly there having an OK baseline and a lot of support with the many EtB effects in cube. It is the high cost and the three colours that make this too narrow. I want my five drops in cube to win on their own rather than because I doubled up on my subsequent EtB triggers. I want my five drops playable in multiple archetypes too which Yarok fails to do. Lovely card and all sorts of fun looking but ultimately just a narrow win more card in limited. 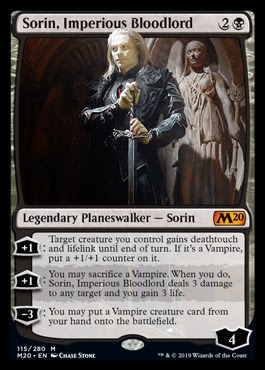 Pretty exceptional in a tribal vampire deck and unplayable outside of one. With all the abilities needing vampires, most in-play vampires, you just have to have both a high creature count and one of specifically that type. If that is the case then Sorin offers a lot of power and versatility and should be able to perform better than most other three mana walkers. Versatile and powerful effects, all ready to use right away, lots of loyalty and ways to grow. Impressive, although narrow, card. 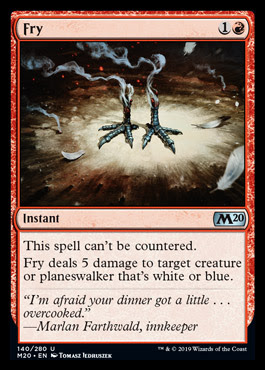 Broadly just a better Combust. It will see little to no cube use being a narrow and relatively fair sideboard card. Will see lots of standard and some modern play too though. 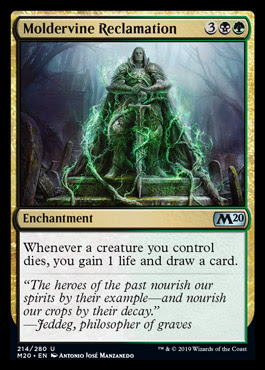 Super powerful effect but rather far up the curve to be all that in cube play. The lifegain makes this much more comfortable to sit on compared to most alternate black options which tend to cost life rather than gain it. The thing is you don't need many cards extra to be in a really good spot. What you need with those cards is mana and the cheaper black cards give you that. Much as I like this I can't see it being quick enough in a 1v1 format. Five mana enchantment do nothing synergy payoff cards need to win the game directly and this does not do that. Sigil of the Empty Throne is a card that does exactly that and is one of the few examples and unshockingly also one of the few that sees play.