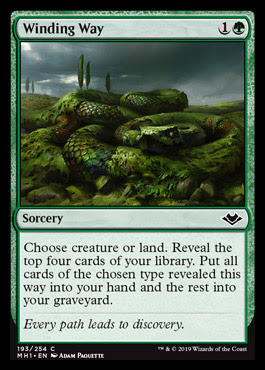 Lovely. One of the best support tools green has received. This does so very much and will end up supporting a vast array of decks. First and foremost it is card quality. You get to choose action or choose lands which is what most good card quality really does. Another thing good card quality does is dig into your deck when looking for specific things. This digs as well as most of the best of them. Four deep is solid for two mana, it is Impulse deep, few one drops touch that range and many two drops fall short of it too. This helps fill up the bin which far less card quality effects do. A lot of those that do are either lower potency i.e. digging three deep, or lower range either unable to find lands or much more restricted on what kind of action you can grab. Now this is where it gets really spicy. Winding Way has some pretty reasonable odds on hitting two or more things you named and being very impressive card advantage. If you want to find a land with your early card quality finding two or three is going to be amazing. On the flip side, if you wanted to find land and failed that is really not at that much worse than failing to find a land with any other kind of card quality in that situation. Getting no value from your Winding Way is not what is costing you that game, lack of lands is. Indeed, Winding Way is still a huge help in those cases as it digs your four cards closer to actually finding a land. This is pretty comparable to Grapple with the Past. Both very playable and solid cards that support a lot of builds. Grapple offers a little more security with the recursion element but Winding Way offers way more punch and power with the ability to dig deeper and get actual card advantage. Mulch is pretty good and this is so much more powerful and playable. In a deck with 20 dorks, 16 lands and the rest spells Winding Way is basically a two for one on average in whatever mode you like. Sometimes it will be more! That makes it so much better than Night's Whisper that it is comic. Even at 1.5 lands or 1.2 creatures a go it is still better than Whisper. This gets you what you need and more of it than other cards of the same effectiveness. The only times this is weak is when you have a low creature count and then you don't play it as often. Twelve or more dorks sounds a good starting place for this to be worth playing in most midrange decks without much in the way of graveyard synergy. If you just want the mill and only have a handful of dorks then you can just play this as a Mulch and it is still better. Those few times you need to hit a dork you can name them and hope to get lucky. I want to give this an 8/10 but I do have a habit of getting a little over enthusiastic about cheap card quality. Having recently trimmed Adventurous Impulse from the drafting cube I am reluctant to rate this as high as I want. 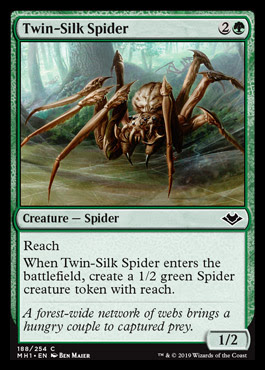 Three mana for a Giant Spider spread over two bodies, and with the potential perk of an EtB effect to milk. This is pretty low powered for cube but it is still generally an OK card. When it is the right kind of support tool it has a chance of seeing play. Best odds for that are with a tribal spider deck! More upfront kick than Penubra Spider but a whole lot less value overall. 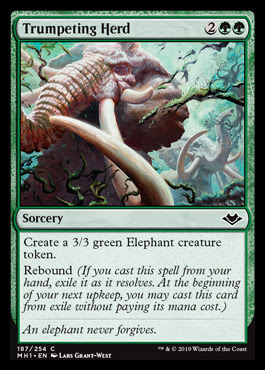 All of Call of the Herd for the bargain price of 4 mana! While this is reasonable value it is painfully slow and vulnerable. Your turn four play is a bad Hill Giant. You can make that tempo loss back with the rebound on the next turn but it is all a bit stars needing to line up. So many things make this a do nothing, both in value and tempo. The ceiling isn't even that good. I think in most cases a vanilla four mana 5/5 non-token is getting more done for you at less risk. Not a place you want to be in cube. 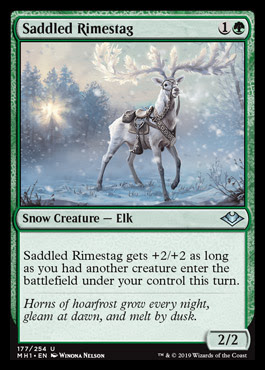 In a zoo deck this is broadly going to be a 4/4 for two which is great. It looks a lot like some of the landfall cards out there. Outside of a zoo kind of deck you are not going to have the creature density to have this be consistently big nor will you really have the theme to suitably abuse a big vanilla dork. This is narrow and pretty fair by cube standards but it is still playable. I recall people losing their minds over the power of Watchwolf and now here I am calling a two mana 4/4 playable! 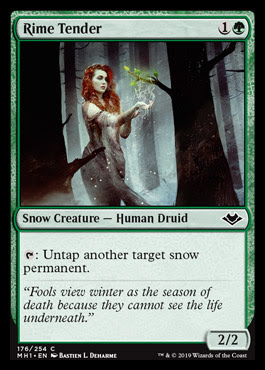 This is fine at doing one thing, it will be some awkward backup for untap effects in the odd place. 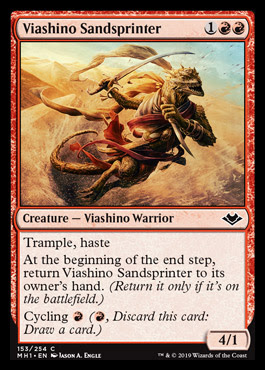 A bit fair in function all told despite very elegant design. Really you need a deck that wants to fill up the bin with dorks while also being a heavy red aggro deck for this to look like an include. It is not quite potent enough at what it does for you. Cycling is at it's least valuable on a mid or late game proactive aggro card. Those are the meat of what you want to be finishing the game with and so in theory you shouldn't under normal circumstances want to cycle them later on. Certainly you want to cycling anything expensive in a mana screw but the tempo hit from doing so is a significant blow. When aggro and building with cycling you want to tip the scales in the other direction. 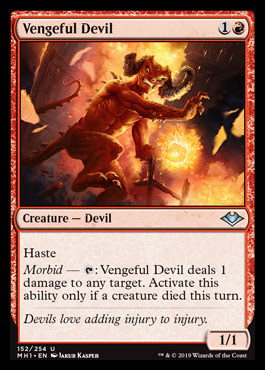 This might just be good enough. A cheap and hasty pinger with the drawback of needing morbid to actually ping. Red is good at killing things and fairly good at getting its own stuff dead as well. The power on this is lower than something like a Sharpshooter but it is far better suited to the mana cost. Usually we see this effect in comparable cards between 3 and 4 rather than 2 and 3. With most pingers being 1/1s or smaller you are rather happier investing two mana. The risk is far lower while the power is only a bit lower. Pingers are generally polar cards, they are vulnerable but do a lot of work if they stick. You can afford to lose some top end performance to reduce the severity of a bad performance. Haste also lowers risk further and increases your odds on doing some work with the Devil. Once in play your opponent will be able to play around it to some extent but on the first ping they will have no idea. All in all this seems like a fair and playable pinger. I think it should be comparable to Gideon's Lawkeeper in power and playability, perhaps a touch behind. 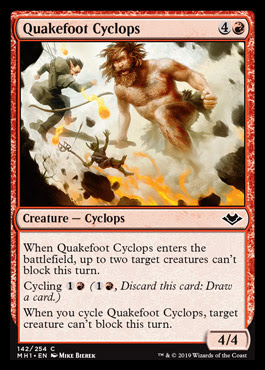 This is pretty good for this kind of card. It is basically a Stun that is both uncounterable and more importantly, playable when you have no targets. You can literally just cycle this! The only place this doesn't measure up well to Stun and even Renegade Tactics is that it is a creature. The others trigger things like Young Pyromancer and reduce the cost of Bedlam Reveler. They are more commonly desired for being cheap cycling cards of the appropriate type than they are for the effect of stopping blockers. Smoldering Spires, Ahn Crop Crasher and Earthshaker Khenra are the most played can't block cards in red with Frenzied Goblin still cropping up now and again with the most caps already under the belt. These are all cards that do something else you want rather than just can't block effects. While Cyclops does have a dork mode it is shocking. Without haste it is really unlikely to be that useful. Not only is a 5 mana 4/4 poo but not lining up with the blocking prevention means you are really only likely to get value from one or the other in any good time frame. If you do get value from both it is slowly and you will likely have some dead attackers sitting about. Despite sucking a 4/4 off the top is still a thing and better than a land or a Stun and there will be plenty of times taking out two blockers for one turn wins it for you. This all means that this Cyclops does significantly outclass Stun but I still don't really anticipate seeing it played in cubes. Impressive power, playability, depth and design for a common at least
. 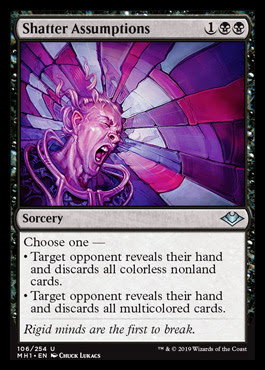 Interesting sideboard card in modern but quite possibly still too slow there at three. In cube this can only be played as a sideboard card and certainly has no place in a drafting cube. It has a tiny chance of some action in some rotisserie sideboards. You need such a high hit rate with this (over two cards per cast) for it to be good that it is only good against decks that are heavily gold or colourless in the non-land area while also retaining decent hand size in the mid game. 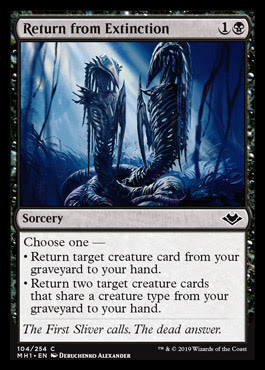 These draw two for two cards that recur things from the bin are just too narrow. While it is very easy to build a deck where this gets two things back consistently it is very hard to build a deck that allows for that on turn two. Cheap draw is usually something you want early. Night's Whisper is a great turn two play in a lot of cases. This isn't. Find // Finality is also rather more appealing than this even without green. I can't see this getting run despite seemingly reasonable power.