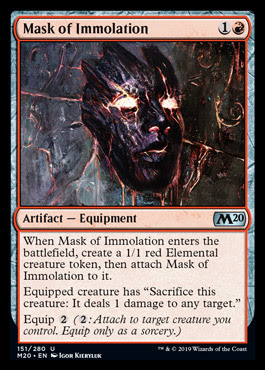 Bad Mortarpod is bad. You might run this if you really wanted an equipment and a token in one card on the cheap for some reason. Basically you might run this in the places you might want a second Mortarpod, when you are red. Which sounds like almost never. This is probably a 1/10 and I just like the design leading me to overrate the thing. It isn't a bad card, just not a needed one. 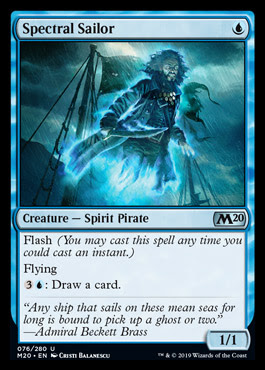 This is great. Three lines of text always a strong starting place on a dork these days. This will see play in tribal spirits being a top rate one drop. It will see play in pirates if that is ever a thing due to there not being many and this being good. This makes the cut in skies decks too. I am not quite so sure how this does in drafting cube though. It isn't overly aggressive or all that relevant of a thing to have in play. It is a great mana sink but not an efficient way to draw cards or even all that reliable what with having one toughness. For midrange I think this does too little early and is too expensive to milk for value. I think this is probably a better control card all told. Something you can use as a tiny bit of planeswalker support early or as a potent card draw engine late. Having flash makes that a real possibility but probably again just too mana inefficient. 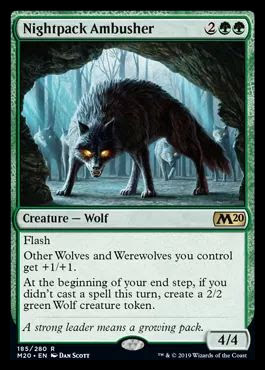 Great tribal card but not unplayable generally. If you have any sort of mana sinks on permanents open to you then this is an impressive card. It is like a Whisperwood Elemental that costs one less and makes 50% bigger tokens! This will win a game all by itself fairly fast, it is reasonably easy to get out and big enough to evade a bunch of removal. It is a little linear but it does the right sort of thing to be drafting cube worthy. Without the flash it would not be. Certainly one of the first names on the teamsheet for any wolf or werewolf tribal list. 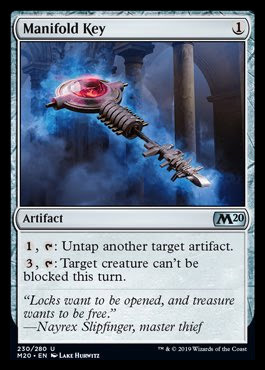 Just another Voltaic Key. Unblockable is nice but rarely why you play this. It makes Blightsteel a bit better! Mostly it is about making high production mana rocks better and having a bit of bonus utility while being a cheap supporting artifact. This will see a lot of play in the places you see Voltaic. As I banned both Vault and Monolith a while back Voltaic has seen barely any play and so I expect the same to apply to this. 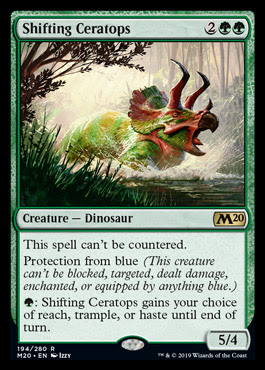 Just play a Thrun or a Carnage Tyrant, they are good against non-blue decks. This is a fairly mediocre dork that is only good because of how good it is against a heavy blue deck. 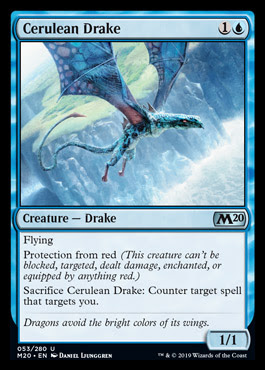 This is fine, it is very good against aggressive red decks and has some applications elsewhere. Blue does struggle against aggressive red decks so this is a nice way to patch up that hole. It is great where you need it to be without being unplayable in other matchups. This is a common failure in hoser and hedge cards. There are certainly a lot of new cards that make me want to pad out a blue ninja theme. Comically that is more to be able to play with cards like this and Spectral Sailor than it is the ninja cards. This is a card you play in a cube for balance reasons. You don't want to have to resort to cards like this but sometimes we have to and it is good that we can. This is certainly a well made card being both playable and suitable. 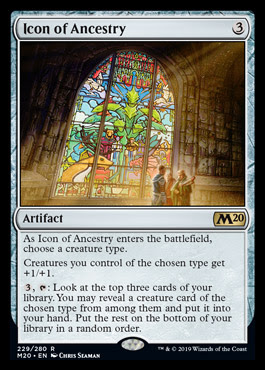 Very strong tribal card being both late game value and midgame Anthem. A huge help to the lord light and value light tribes out there. Unplayable in a limited setting but not going to be a card short on attention elsewhere. More of a casual card for EDH and cube than competitive constructed but still with some potential there too. A whole lot more impressive than Hall of Triumph. 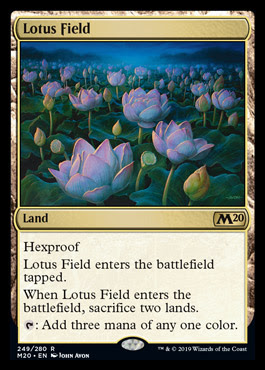 Some redundancy for Blood Sun but that isn't a serious thing. If it doesn't work when you have four copies of things there is no chance it works in singleton. Hexproof does make this something you can just play. It is just an EtB tapped dual land provided you have two others. For decks that always need to hit three lands that is fine but not good. This then has a wide range of applications not relating to trying to be clever with Blood Sun. You fill up the bin for all the juicy things that does for you. You can cheat a Cataclysm or further unbalance a Balance. You can more easily splash a card like Seismic Assault. You might get away with making more quick lands untapped! Lastly but absolutely not least you have the ability to abuse this with untap effects. Frantic Search can add two with just this (and two other lands) empowering it. Garruk Wildspeaker suddenly makes twice as much mana. Interesting card that should see a lot of play. Seems too narrow to be wanted in the drafting cube though. Mostly it is just a dual land that needs to be preceded by two lands and which enters tapped. Vivid lands probably outclass it at that. A most useful and interesting tool. At face value it is fair but you can abuse the lopsided nature of the card. Unlike previous iterations of such things you can somewhat more reliably lean on this to do what you want as it cannot be sniped out by such things as Wasteland and Vindicate. 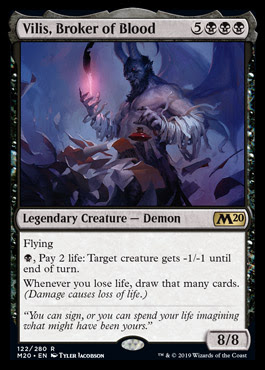 A somewhat fair take on a Griselbrand card. This is more versatile with both card draw and board control options and it is a bit bigger. It is still not a patch on Griselbrand because you cannot reliably just draw a tonne of cards without spending more mana. The Snuff Out cards are nice with Vilis but they are a far cry from as consistent as having 7 life to burn. This will not take the slot of Griselbrand in any cheat out decks and as an eight drop it had no chance of cutting it. Perhaps you play this as your bad redundancy in the odd cheat out deck. Powerful, well designed, but even more outclassed. 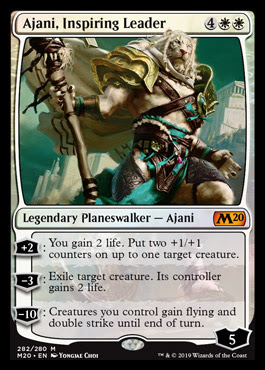 While this is still sufficiently bad for me to be happy with this product it is a touch frightening. This is almost better than Ajani Unyielding which was from an actual set. I really don't want to ever have to buy cards from these intro packs, that would feel like such a money grab. Granted Unyielding is a very poor walker but still... 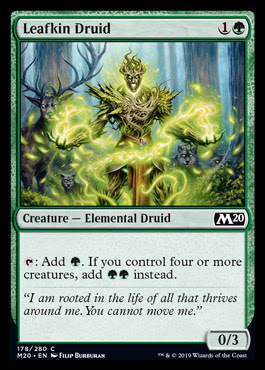 This is probably an upgrade on Whisperer of the Wilds but still not reaching the level of Devoted Druid. The only time I see myself playing this is in an elemental deck. There are just more powerful alternatives to this of sufficient quantity when tribe is not a factor. Even in elementals Smokebraider is still better but you will at least happily play both. 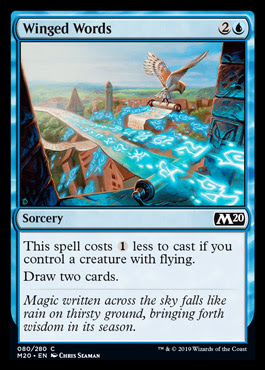 Narrow but cute. Much as I like this I am probably still not playing it over Chart a Course. Although this is certainly better when the conditions are met, and those conditions are easier for Winged Words too, the floor of the two cards heavily favours Chart. Although bad compared to Chart in terms of floor the floor of Divination isn't terrible and the upside of two for two is very nice. I can see myself playing both, or this if I don't have access to Chart. Just in very few decks.