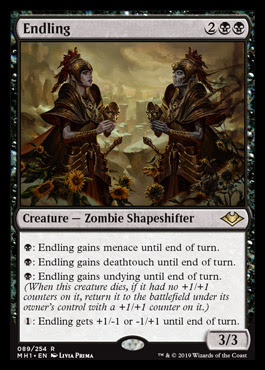 If it were not for the zombie tag I might well write this off entirely. It is a Hill Giant without mana up and it is far easier to deal with than most of the cards of this nature. This is not the reliable game ending threat that we usually get with our -ling cards. This is just annoying in combat and versatile. It is not all that efficient or high tempo. A five one menace attacking on turn five is not a frightening prospect. Especially when tying up four mana to do so with undying protection up. Seems garbage. 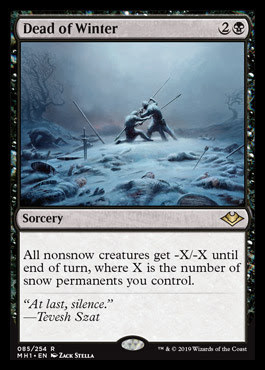 This is potentially very impressive. It is pretty much a Mutilate for one less black mana. It doesn't have the same cute land cheats with Urborg, Tomb of Yawgmoth but we can probably live with that if we are getting a juicy three mana Wrath for our troubles. While this is very strong if all your lands are snow and even more impressive if you can add to that count with the odd snow permanent extra it does rather make it a mono black Wrath like Mutilate. As soon as you touch non-snow lands the reliability and scaling power of this start to really suffer. If you don't touch non-snow lands your multicoloured deck will have a horrible mana base. This makes it too narrow for the drafting cube but a strong option for any mono black control lists that gets done. 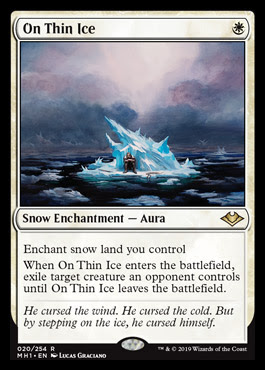 Unlike Dead of Winter this is a card you can actually run in a multicoloured deck. You only need one snow land to enchant and you don't need it right away as is the problem with some of the other snow dependent one drops in this set. Providing you have half your lands as snow or a third and a boat load of dig and draw then you will be totally fine to run this. The only thing I can see making this bad is if there is a big punishment for playing snow basics instead of normal ones. Seems unlikely for cube but if it ever does happen this will drop off in value. As it stands this is pretty much just a Journey to Nowhere for half the price. Sounds pretty cube worthy to me. It competes with Declaration in Stone as a removal spell more than anything else and I suspect it is going to get a touch more play being that much better tempo and that much less likely to give away card advantage. 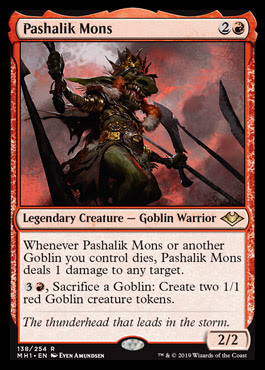 Nice homage card. Also nice goblin card. This single-handedly makes goblin aristocrats a really big deal. The passive is scary good and makes cards like Goblin Bombardment and Sharpshooter utterly terrifying. The activated ability is a reworked Goblin Warrens and fairly well suited to what Pashalik is about. Left unchecked with some mana to spare goblin tokens and damage are happening. Great mana sink mode for this package deal card. It doesn't matter so much that it is not the most efficient way to spend four mana. A ping and a 1/1 is pricey despite being good. The thing is that you are playing Pashalik for the passive and so the activated is all just on-theme bonus. Despite being a tribal card I think red is goblin heavy enough that this will perform well on average in drafting cubes. It is potent enough to be in the running for any kind of goblin deck regardless of the sub-theme and is the undisputed trump card in goblin aristocrats. Red is flush with nutty good three drops presently so this will have to out perform expectation in a limited setting to retain a drafting cube slot. Even if it doesn't it will be a mainstay of many singleton constructed decks so we will not miss out on this fellow! 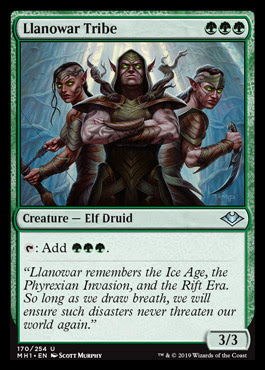 Well this is ramp. Holy shit. Pound for pound this is up there with some very big names. This is doing Gilded Lotus and Thran Dynamo levels of ramp at rather less of a price. It is doing the work of Mana Vault or Grim Monolith without restrictions on untapping. This is fairly well locked to green with the GGG price tag and it is both slower than artifact ramp courtesy of summoning sickness, and also typically more vulnerable to removal. Despite all these things this card is nuts. You can play seven drops on turn three with ease using this. It almost feels as if Tron decks are simply going to be outclassed by green ramp decks! While a creature tag is broadly considered a disadvantage on a ramp card of this power it is still a three mana 3/3 and actually has a fairly significant effect on the board as that. I think this will outclass Rofellos in my cube. Rofellos dies easily and does nothing as a dork other than die. This Tribe isn't so fussy about what kind of lands gave you green making it much more playable and it does rather more as a dork. Impressive card. Three for three is just so much! 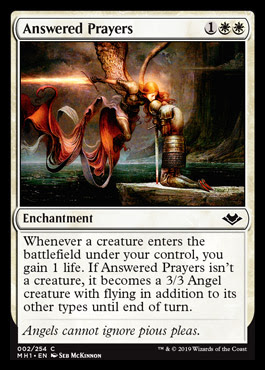 A bit of redundancy for Ajani's Welcome style effects that also does some reasonable backup work as a 3/3 flying beater. This is too inconsistently a threat to play it just as a threat, you need to actively want the lifegain or perhaps enchantment elements of the card. Fine building tool to help support some exotic decks. 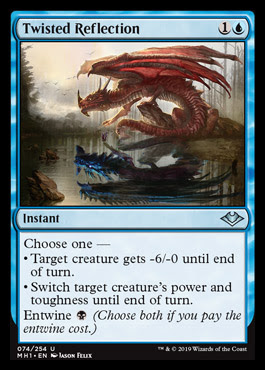 Despite being a design triumph this simply doesn't have the power or playability for cube use. 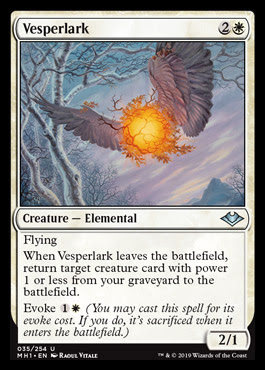 Mini-Reveilark! Generally cheaper is better. If you just want something a bit like Reveillark, as opposed to specifically it for a combo purpose, then Vesperlark is going to be better. You will use it much faster and more often and as such it will have at least as much effect on the game as well as a greater option density. The stats on this are not great but then that wasn't the bag of Reveillark either. Flicker abuse, recursion and value was what Reveillark was about and this is much the same. It is less value but still a value card. It is likely a lot more value if you set about abusing with flicker effects because of the cost difference. The relatively lowered evoke price is nice too, it means you can actually do some abusive things with this in combination with cards like Pentavus to cheat in a fatty. While this card has ranging application from aggressive white decks through midrange value flicker decks all the way off to wacky combo reanimate I think it is too low powered for the drafting cube. A three mana 2/1 flier that replaces itself with something small, if at all, is just not blowing any minds. It needed to much more reliably get something if played early or at least be a bit more powerful! 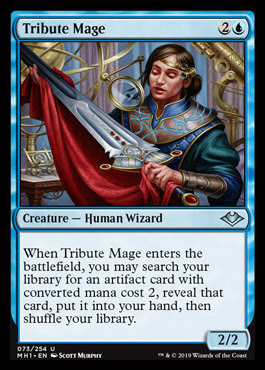 Probably a bit better than Trophy Mage although still just not matching up to Trinket Mage. Trinket Mage just has a vast array of targets covering a broad selection of effects, many of which scale, and most of which have way more immediacy than two drops. In a drafting cube that is mostly just mana rocks and Jitte. Good but not enough variation. Mostly this will see play in combo decks where it finds one or more of the parts. Thopter Foundry Sword of the Meek springs to mind. Tutoring is always good and this is a tried and tested fair form of tutoring. 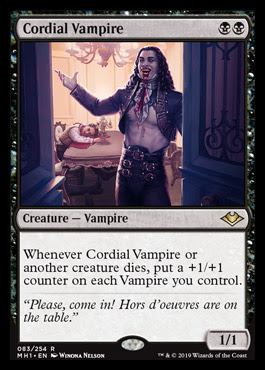 This is pretty nuts for a vampire tribal deck and pretty useless outside of one. While this does still buff up itself when things die the low stats and lack of keywords just make this easily dealt with and often a poor late game top deck or early curve play. If it manages to buff a couple of other dorks as well as itself it is going to get out of hand very fast. The trigger is from all dorks dying as well making combat a total nightmare. Sac outlets and removal, even things like first strike, are going to make this pretty obnoxious. It will be an Overrun for vampire decks if they have a sac outlet too. A build around card that needs setup but provides massive payoff potential. 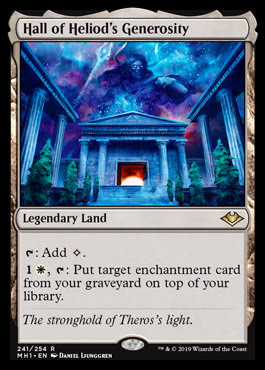 Lovely! Just the thing to help support some of the more exotic enchantment based decks for singleton formats. This won't see quite as much play as Academy Ruins but not wildly far behind. A little narrow to be worth it in drafting cubes but a most welcome addition that will make a lot of low tier things a lot more viable. 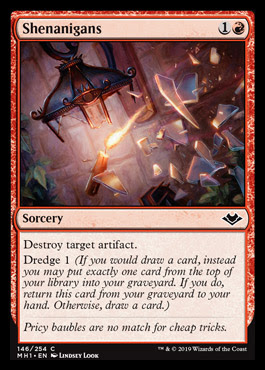 I am not expecting to ever play this. It is a hard artifact disruption card but it just seems bad compared to better spot removal or more powerful mass removal effects in red. Perhaps in the sideboard of a deck that wants to fill up the bin and has some artifact heavy lists to play. Not being instant makes this so bad as a disruption tool against so much ranging from combo through to equipment.