While certainly a superb counter to Grape Shot I don't really see where you are using this outside of a Bolas's Citadel deck. Now that I think about it this does also support Aetherflux Reservoir as well as Citadel but it is a bit win more in the latter. It probably just counts for 2-3 spells towards your getting to over 50. Eitherway, when you are generating storm it is about winning, not about gaining life. This will probably counter more combos than it ever manages to support which is at least nice. This is a safe card to print with storm on it which is both good and important. It will see fringe play in and against niche decks only. 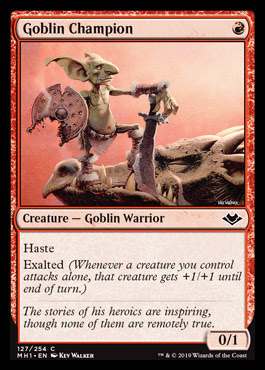 This is surprisingly good but probably still not quite good enough. This is a 1/2 Raging Goblin on its own which is fairly well able to poke life totals down early in the game but unlike the Raging Goblin this continues to provide utility as the game goes on. Not only does t his let you freely and safely apply itself to combat but it lets you scale with better cards. The most notable being the new Krenko. That is exactly the kind of card I wish to become exalted! Even just first strike or some evasive keyword is good scaling though. This even gets around Ensnaring Bridges! The main issue this has is that the kind of decks that might want it tend to attack with more than one thing as the game goes on rendering this of less value. Still, as it one drop it doesn't have to do all that much to make the cut. This has an impressive blend of baseline playability and theme suitability combined with later game scaling and synergy to wind up in a bunch of places and do some decent work. I expect to see this in some goblins decks and potentially something like a Judith deck too. I think this is a similar sort of card to Foundry Street Denizen despite their opposed scaling. 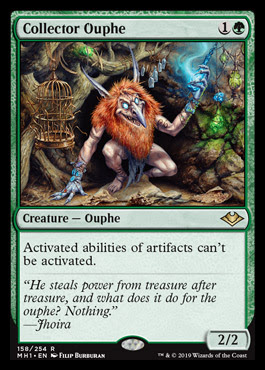 The green Kitaki, War's Wage. This is vastly more playable in cubes than Stony Silence or Null Rod. The legs make it a do something regardless of the matchup and the type makes it much more easily tutored for and put to task when needed. My relatively low artifact count combined with this cards low baseline power means this isn't enough for my drafting cube but most powered and other wise artifact heavy cubes will be able to support this no trouble at all. Great sideboard card and likely a more fun hoser to play against than the harder to remove card types that do much the same. 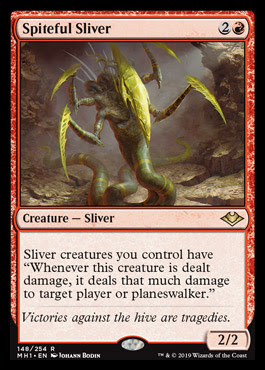 Some combo potentials here but for general use in a 40 card deck I don't think this is enough power or utility compared to other three drop slivers. As your deck size increases and your number of opponents does the same this would seem to improve rapidly. 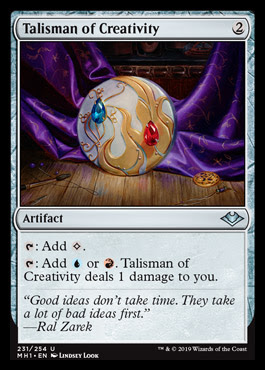 Lovely to finally have these after leaning on the Signets for so long. I expect some Signets will remain in the cube and retain a bunch of use all over the place but there is no getting away from the fact that these are a lot better functionally than Signets. These have been better than the Diamond cycle in mono coloured decks forever and so now the Diamonds are no better than fifth in line! The 10 Talisman will see the lion's share of the play for all kinds of use when it comes to two CMC mana rocks. Mind Stone and Chalice will not suffer quite as much as the Signets and will still be very popular despite still taking a hit. These are great ramp, great fixing, great artifact support and good power level. They will see a tonne of play, likely more than a load of cards I have rated higher. The Izzet one will absolutely see the most by a fair margin. 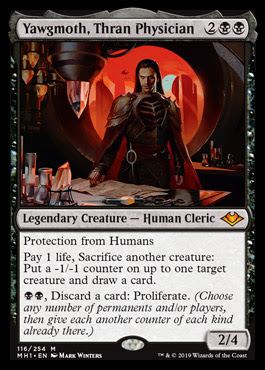 Impressively pushed card that has appropriate flavour. Yawgmoth does not eclipse Urza but he is more playable in my 'creature heavy but unpowered low artifact count cube. I am always on the lookout for good sac outlets and Yawgmoth is certainly that. Free, repeatable, instant and with impressive payoffs too. Either card draw or -1/-1 counters is good, both is great. Protection from humans is fairly big, they are comfortably the most common tribe and have members across all the colours. Yawgmoth also has a discard outlet  although it is less exciting that the sac outlet. Discard tends to be something you lead with while sacrifice is more of and end of chain thing. As such being on a 4 drop is already bad, costing further mana makes it worse. Still, repeatable proliferate for BB which scales with the previous ability is still great. Yawgmoth empowers himself and a whole host of other cards. I expect he directly replaces Yahenni as a top of curve sac outlet with complete ease. Great generally when creature based and superb in Blood Artist decks. Very little bad about this. 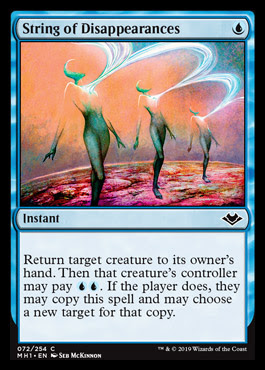 Good blue version of Chain Lightning and despite the fairly direct translation across the balance on this is very impressive. Further to that the ability adds rather more to this card than it does for Chain Lightning. For the reasonable price of UUU you can bounce a thing of yours and a thing of theirs. Basically it is supremely unlikely that this is ever worse than Unsummon while often offering much more utility. Despite being better than Unsummon it is not by much. Vapor Snag is the competition and that will be harder to unseat. String is only going to be good when you are heavy blue and have a decent creature count. Vapor Snag is rather more consistently better than Unsummon, not so mention nicely on theme for most aggressive lists meaning this is getting very little action. 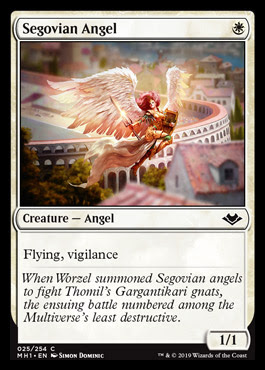 Better than a Suntail Hawk but not better than a Rustwing Falcon or a Healers Hawk! Vigilance is not that useful of an effect here. It is good with the flying but rather undercut by being a lowly 1/1. Best this gets to do is be annoying against 3/1 fliers without buffs. The thing is that you are playing buffs if you are playing this and so it probably does scale up faster than Rustwing. Not that relevant either as if you are playing this you are probably also looking to play all the other white one drop fliers that are better than Suntail Hawk! Low powered card but as a one drop with a theme it will see action in singleton. 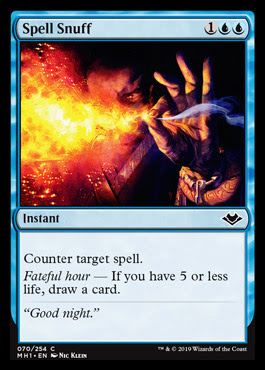 A Cancel that turns into a cheap Dismiss when you are nearly dead. A lot better than Cancel but not enough better to be cube worthy. As it turns out I would rather play one of the scry 1 style counters out there if I am playing a three mana generic hard counter. While a lot less powerful than drawing with fateful hour you never get it early and often won't see it at all. 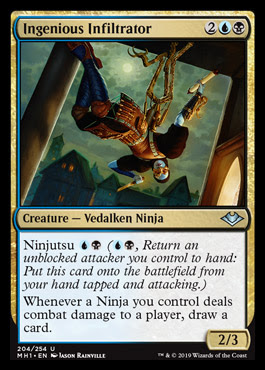 This is just a better Deep Hours effectively. The only real reason to play ninja's, or certainly more filler ones like this, is Yuriko. As such ninjas are very much a Dimir thing. As such this is just a Deep Hours with an extra toughness and a card draw that applies to the who tribe not just itself. I expect to see this in all tribal ninja decks going forwards. I wouldn't even be shocked to see this get some stand alone play. People do just love a ninja! Deep Hours gets love as a stand alone even if it is just in pauper! 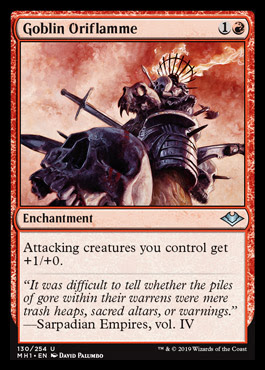 Lovely how things go full circle. A misprint halved the cost of a banworthy card back in the day. Now we see it in print for real. This seems powerful but also narrow. I will likely just play things like Goblin Wardriver over this. It is only going in synergy decks and I don't rate it enough to merit hurting synergies when I could play dorks with these effects. Given how much better things like Honor the Pure are than this I can't see it making any impact at all in the drafting cube. I have played War Horn but only in blue decks that lack much access to these kinds of things. And even there it wasn't very impressive. Despite the lower cost, just being red makes this a lot less interesting than War Horn.