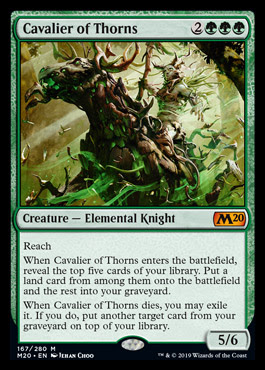 The weakest of the cycle by some margin. Ramp late is mediocre. Play Primeval Titan or play Elvish Rejuvanator. The body on this has poor closing power and the on death trigger is slow and affords no card advantage. This does quite a lot but none of it is what you want given the way it is presented. 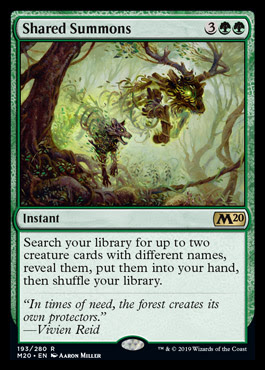 Instant speed makes this quite interesting. It is card advantage and a tutor and it isn't over cost. This has a lot of potential in a number of combo decks and has some application in both ramp and midrange decks. With enough creatures with enough of a spread of effects this looks pretty good in control too. It might be one of those top end cards that overly thins your deck of gas but it looks a bit too good to suffer all that much for that. I am not sure it will get enough play to last in the drafting cube but it is very much one of those cards that could. 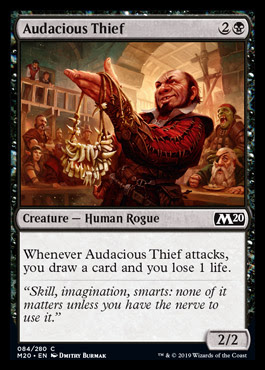 Interesting rework of Phyrexian Rager. Slower and less likely to return value but potential to return a lot more value. Seems like black doesn't need to run slow risky crap like this in cube so we can probably move on but I do like this card. I like that it is made and printed at common too. 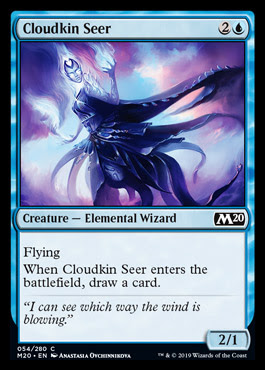 Hmm. Well, this replaces itself, is cheap, and unlike most other cards in this camp, has a relevant body. Baleful Strix is relevant mostly for the deathtouch and while a much better defender, Strix offers poor offensive threat. Now Strix is one of the best dorks in the cube and remains firmly better than this what with being a two drop but the fact that they are even in the same conversation together speaks volumes to this Seer. I see myself playing this a bunch. I'll throw in a lot of places just as nice filler. It gets you where you need to be going at minimal cost. It is OK on the tempo front, is never dead, and costs no cards so it is very low risk. The card is lowish on the power level by cube standards but the playabiltiy feels great. 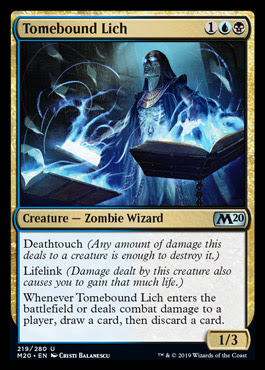 Lots of strings to this one's bow but all together still not enough to compete with cards like this that actually generate card advantage. Play Thief of Sanity or Shadowmage Infiltrator. Lifelink is mediocre here with one measly power. Deathtouch is better as it makes blocking more awkward and helps on defense a lot. Ohran Viper is pretty reasonable and the deathtouch counts for a lot of that. The biggest perk this card has is the EtB trigger on top of the combat damage one. It makes this card a lot more reliable than the likes of Ohran Viper if you are in the market for looting instead of drawing without the discard. It is a bit slow for combo decks but is just the ticket for some zombie bidding lists and other graveyard midrange strategies. This is like a better Nyx Weaver and will see play in the same sorts of places (theme wise rather than colour obviously!) Too fair and gold for the drafting cube but a card with some uses never the less. 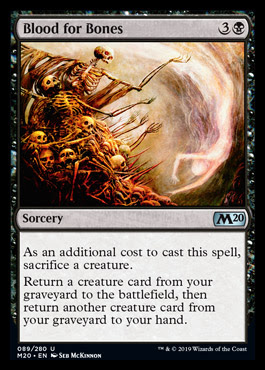 Slow, risky, narrow, and not even all that powerful. Play Victimize over this. Or Zombify. Or treat yourself and play a good card over it instead. This is so bad that bad cards start to look good. I bet this will see play somewhere too, just not in any of my cubes! 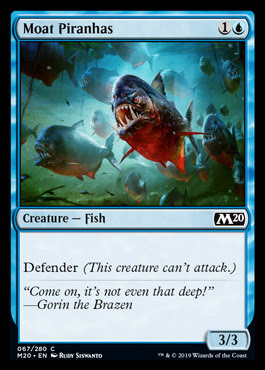 Big stats for blue. Might see some love just as a big cheap wall but I highly doubt it. Might see play in a defenders deck but again, I doubt it. Most of those don't need power and with this card that is what you are getting. Nice clean design though. Feels like this card could be 25 years old. 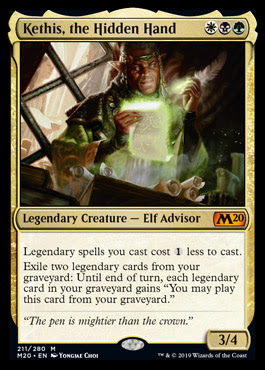 Lovely design that instantly makes me want to brew around this in a multitude of ways. This is a fantastic looking commander first and foremost. For cube he is hurt by the many colours. Despite the legend count in cube being higher than in most other formats this just isn't going to be enough extra to be worth a cube slot. I suspect this does under 0.5 mana reduction per cast and still under ten times less than that on the recursion front on average in limited cube. It is not until you build a legendary deck around Kethis that the power level really starts to rise. This will go very well in a historic deck where your mana base contains a bunch of legendary cards and you can run Board the Weatherlight and Urza's Ruinous Blast with no trouble at all. There this goes very well indeed! I suspect Kethis ramps that build up a tier in cube and at least two tiers in commander. It also gives it direction. Black and white are the best historic colours but there was no clear way to go beyond that until Kethis. You should be able to make a nice 40 card Abzan deck with up to 50% legendary cards in it while still being decnent which will make Kethis pretty nuts. The passive will do a lot of work and the activated will be so nuts that you play self mill cards to power it up and increase the option density. Kethis looks like a lot of fun. 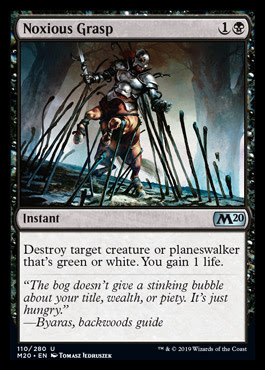 I rate this over Deathmark mostly for being an instant. The increased target range and lifegain make you happy to pay two for it but the speed of the spell is what makes it so good. This is a nice sideboard card in that it is space efficient due to working against so much. It is also nice in that it is a fairly fair way to hedge and hose. You just get a powerful efficient spell that won't ruin games unlike Chill or Warmth which do. Much as I like this there is not much call for sideboard cards like this even in singleton constructed events. 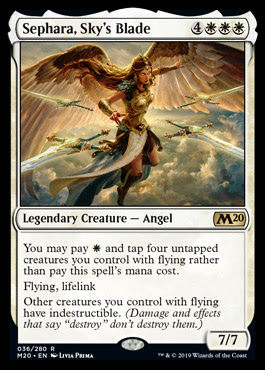 Oof. Four fliers you say? That is a lot of fliers needed to play this. It makes it sound very win more as well as unreasonably conditional. Decks that can play seven drops will not have four fliers in play and those decks that might be able to put out four fliers really can't play seven drops meaning this will be dead weight a lot of the time. The real cost of Sephara is skipping attacking. If you have four fliers then that should be at least four damage missed. If instead of Sephara you just play a Glorious Anthem card and attack then you are doing eight. Sixteen in the space of Sephara doing eleven over two turns. This means Sephara isn't even that good unless you make her off the back of vigilant fliers or on the same turn as making your fliers. The massive six mana play of Lingering Souls times two followed by Sephara is certainly powerful but it is late, unlikely, and probably win more too. I love the idea of turn one dropping out four Ornithopters and playing Sephara while we are talking about unlikely things. I will give Sephara a shot of performing in a skies deck at some point. She has no hope outside of decks built to house her and I don't hold out that much even if she is supported. She is potentially very powerful at least, who doesn't want to make a one mana 7/7 angel of winning!