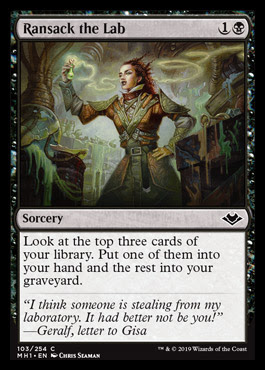 Strategic Planning in black. I have Planning still in the cube presently but it is comfortably one of the weakest card quality spells on offer there. The thing carrying it is the self mill component which is a big deal in cube. Decks without some graveyard synergy only run it if desperate, although most decks do have graveyard synergies in my drafting cube. What is so exciting about this is that it is decent card quality in black. Prior to this the only card quality in black were tutors or Discovery // Dispersal, which is also pretty new. I expect this to see a lot of play. Some aggro decks will run it for the synergies but I expect most black decks without blue that are not aggro will also run it. Golgari delirium has taken a massive jump in power this set with this and Winding Way added to their arsenal. Grisly Salvage is typically the most powerful card in that pairing but it is not as easy to put into a cube due to being gold and thus relatively narrow. Ransack the Lab hits a sweet spot of having enough power to do the job it is supposed to do while having top tier playability. Being the best black card quality spell (that isn't a tutor) it will see significantly more play than Strategic Planning which we can call the worst (good) blue card quality spell. 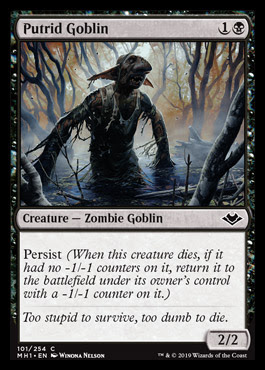 Safehold Elite in black and with much more useful creature types. Butcher Ghoul sees play and this is almost always better as it starts in 2/2 mode thus affords more immediate tempo. The only occasions this is worse are when you have a synergy with undying and not persist. This isn't powerful enough to make it into tribal goblins but it might make tribal goblin aristocrats. It might be powerful enough to make the cut in some zombie decks and should find some love elsewhere too. A useful little support card for a number of solid archetypes. It is probably just a bit too fair and vanilla for the drafting cube these days though. 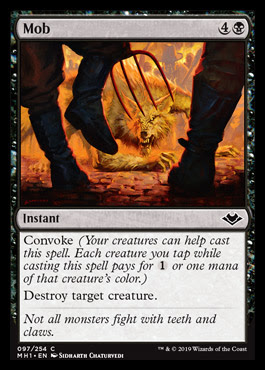 A nice convoke take on Murderous Cut. You can even get this all the way to zero mana! Sadly having untapped creatures in play is narrower and much harder to do that having dorks in the bin. Murderous Cut is still rather better than Mob. It seems only playable (as in better than enough of the alternate removal options) in the swarmiest of decks. Those tend to be light on disruptive cards too so I suspect they would favour something that does a little more taking up non-creature generation slots like a Hero's Downfall. This is a strong card but I don't see where it is ever wanted over alternatives. To empower your inspire cards?! 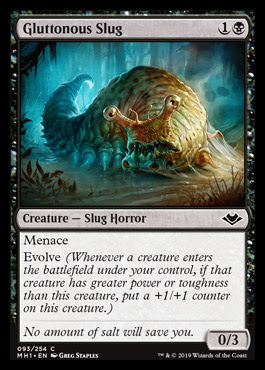 This is a lot better than it looks. It is cheap, tough, evasive, and offers both scaling and synergy potential. Low power high toughness is typically what you want on an evolve dork. Cloudfin Raptor is an impressive little card in cube and this is a similar sort of thing. This is a bit too low powered for a conditional card and so it is only something you would play with heavy synergy. Even so, a playable card! 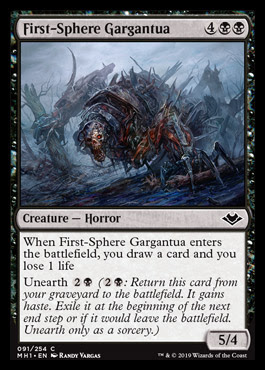 With enough discard and self mill this starts to look quite good. As a late game top deck it is pretty good just for being big and replacing itself. You never want to play this on curve however as it doesn't compete on power level at all. You can only play this in your deck in the first place if you expect to mostly unearth it. Five damage for 3 mana is passable even when it is going to be combat damage subject to being blocked etc. When it costs you no cards as it is from the bin it looks pretty nice. Slap on to that an actual draw for the minor cost of a life and you have a very nice little option. Like a clue that packs extra punch! I suspect this will make the cut in a lot of Ichorid style decks as a sort of rounded filler card. 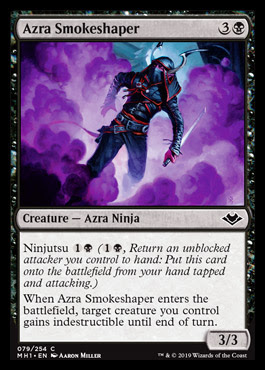 This looks good enough to make the bar in a lot of ninja decks. It is reasonably meaty and should afford a reasonable tempo swing for you when made. It is not an exciting ninja but it does help cover the aspects of ninjas where they are weaker. You don't even need the indestructible trigger to do work if you return something like a Fearie Seer or even Pilfering Imp, just a pseudo-haste Watchwolf is fine enough. 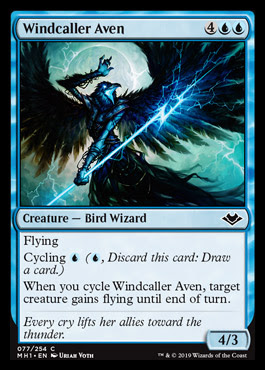 A blue take on Quakefoot Cyclops. While the hardcast mode on this is even worse than the pisspoor Cyclops it has a little more potential being a one mana cycler. Blue probably has enough of those now on more useful cards but much like I rarely rule out a one drop, I rarely rule out a one mana cycler either. As with Cyclops and Stun, this is generally better at doing the job of Leap as you don't need targets. 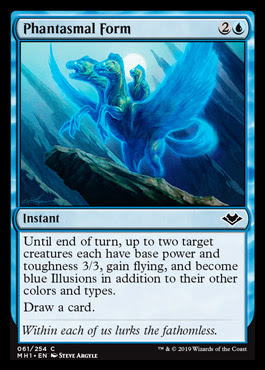 Powerful but a little too situational to be good for a drafting cube. You need a dork in play to do anything beyond cycle this and you really need two smaller ones for it to be good. Ideally you then want to have on option on combat with other small dorks or perhaps planeswalkers. The ceiling on this is killing a pair of 2/3s with a pair of 1/1 dorks for only three mana thus getting a 3 for 1. Perhaps it is killing a 6 loyalty planesalker with a pair of plant tokens! Powerful but unlikely. 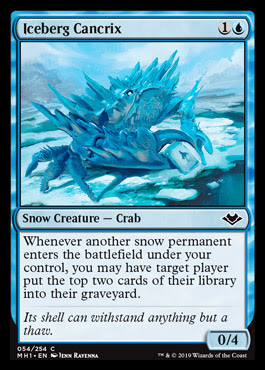 A bad version of Hedron Crab. Still playable in a deck that can run mostly basic lands and really wants to mill, just very very narrow. 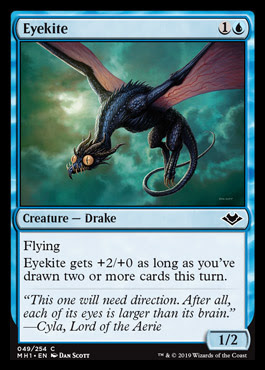 Cute but too much work to support in a drafting cube and not enough power or synergy to really be building around. Sustaining two cards drawn a turn is a whole lot more significant than this 3/2 flier. Either this is a 1/2 too often or your deck should be doing more impressive payoff things than a 3/2 flier for two. 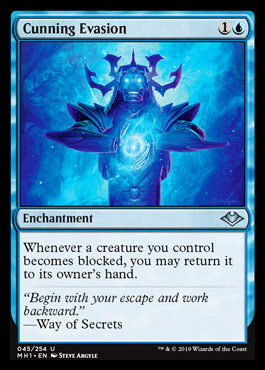 This is a ninja's wet dream. It is also a blue version of Reconnaissance which is quite exciting. While super low tempo when used on mid range vanilla beaters like a Trained Armodon that isn't what the cube is full of. The cube has lots of cheap things with powerful EtB triggers which makes this really scary. Either I take two every turn from this Snapcaster Mage or I let my opponent reuse their Snapcaster Mage! I anticipate playing this in a lot of aggressive decks containing blue and all ninja decks. Blue is sufficiently non-aggressive in drafting cube that this is likely too narrow but the power is there. 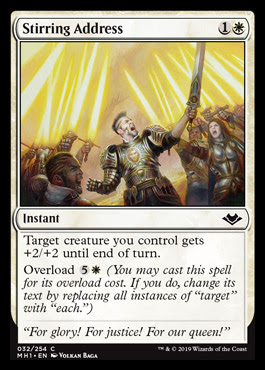 Just a little over priced at both ends. Could really have used a nice extra keyword in there to spice up the deal. 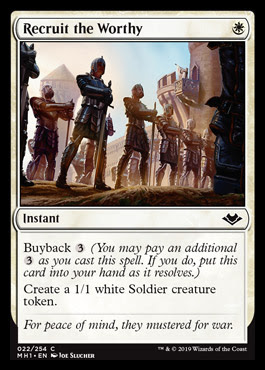 Cheaper Sprout Swarm without the convoke. Alternatively a much better Lab Rats! White is certainly the colour you want this in but I think it is just too fair and slow to make much impact in a white deck. Pretty sure I would just rather play Kjeldoran Outpost over this in most cases. I would certainly rather a Legion's Landing! Even Dawn of Hope looks like it gets more done than this. Elegant card but not powerful. The only real perks this offers are spell synergy for something like a Monastery Mentor, and option density. Having a one mana 1/1 flash in your hand might be just what you need to kill off a walker or trigger a Windbrisk Heights or whatever. Technically this card isn't 4 mana per dork. It is X mana where X = 4n +1 / n+1 where n is the total number of buyback costs paid. Taking into account this final cast you wind up with a value for X which is always lower than 4 mana. A five mana Raise the Alarm is bad but a lot less bad than an 8 mana one!