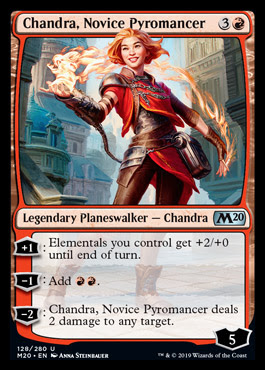 My god these spoilers seem non stop at the moment. I always wanted sets to contain few unplayable cards and now that I have my wish and this has come to pass I can't handle it! In what seems like it is heresy and something my younger self would hate me for it transpires that I could do with fewer releases. I will attempt to be concise with these reviews to help ease the load. Sadly concise is not my strong suit....

This is impressive considering. Lower power and utility than Torch of Defiance but not by all that much. Better utility than most of the other 4 CMC Chandra offerings too as it happens. Novice is nicely splashable and offers some redundancy in mana production roles. I might play her in an elementals deck or as a 2nd Torch of Defiance in a deck really keen on the combination of mana production and direct damage. A bit too low power and narrow for drafting cubes but none the less a staggeringly impressive uncommon planeswalker. This is exceptionally good for cube. As with Novice Pyromancer the ultimate is replaced with another normal ability and this greatly increases the utility of the cards compared to the conventional ability ability ultimate setup. Ultimates are powerful but infrequently relevant. Abilities you can use right away add way more to a planeswalker in most cases and these are not an exception. The first ability is fine, it has some scaling potential and might make things a bit harder to work out for your opponent. It gives you the option of just going up to five loyalty which is great on a three mana walker. The second ability is decent damage output that can assist in killing planeswalkers. It is not as reliable as the damage output on other Chandra cards but then they tend to cost more to cast and do less work. Less damage per loyalty if not nominally. It is efficient but it also has some scary scaling potential too. Any creature buffs and sac triggers or outlets get to apply, and twice. Have a Goblin Oriflamme and a Goblin Bombardment in play and these attack for two each and then ping for a further one at any target. Just based on the power of this ability alone you will find Acolyte of Flame in any red token, sac or go wide list. Lastly we have the -2 which lets you Snapcaster Mage cheap cards. That is pretty much all you do with Snapcaster anyway. It is value and utility and really really good. As a sorcery speed effect it is no good with counter magic but we can cope with that. It will typically be used the turn after playing Chandra as you still have to pay mana costs. This is one of the more impressive three mana planeswalkers I have seen. It isn't narrow nor is it limp. The only thing it doesn't do really well is protect itself but the -2 will a lot of the time, as will being cheap and having loads of loyalty. It does sufficiently aggressive things that racing it will be hard. High power and utility with lots of synergy and scaling potentials. 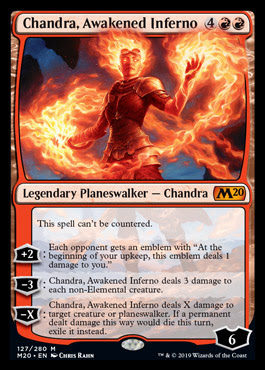 An impressively powerful planeswalker that really only needs to contest Chandra, Flamecaller to earn a cube slot. Absolutely Inferno is a lot more powerful but it is also a bit less utility. Both win a game with their first +loyalty. Inferno does so reliably while Flamecaller does so quickly. Both have a board clear. Inferno is relatively cheaper to use and can offer some one-sided synergies but it is less reliable and less versatile. It cannot efficiently snipe out a load of low toughness dorks or indeed ever kill a bunch of four toughness dorks. Inferno has a spot removal last ability which covers board control very nicely indeed. It makes up for the restrictions on the -3 and makes Inferno impressively safe overall. Flamecaller however has an impressive card quality and advantage tool. Versatility is nice on a planeswalker but at six mana you are happier just winning the game. You shouldn't need that much more value if your six drop walker is in play. With that all in mind it seems like the lower utility of Inferno doesn't really matter given the power level and point of the curve they occupy. Game ending power in a reliable guise is what you want and that is exactly what Inferno offers. Uncounterable is a perfect extra bit of security tagged on. It will give midrange red decks a Carnage Tyrant type card against the heavy control decks. This is an easy direct replacement for Flamecaller. It might even be more impressive than Inferno Titan! 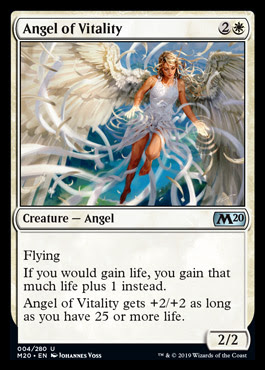 Potential for soul sisters decks where you are getting most out of the +1 to lifegain trigger. A three mana 4/4 flier is good but not so exciting you build to empower it. The floor is sufficiently bad that this shouldn't see play outside of lifegain themed decks. 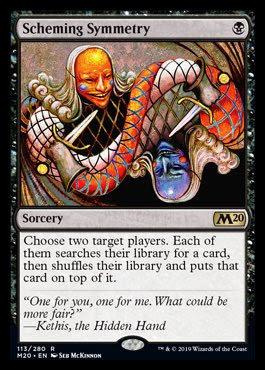 Well isn't this a nice EDH friendly tutor! I expect we shall find this in most black EDH decks moving forwards. For cube it is a little dodgier. Sorcery speed on a Vampiric is a big downer for one as we have learned from using Imperial Seal. It just gives your opponent way to much time to react while denying you possibly vital info. This goes one worse by giving your opponent the card they need as well, but at no cost and usually first. I think you can only play this in a deck that is able to break the symmetry. Either it uses library search prevention tools, mill, or it has card draw at the ready and wins the same turn as casting. Great design. If this was instant it could challenge Vamp. As it is it is supremely narrow but that is what you want from a card with such a potentially high ceiling. 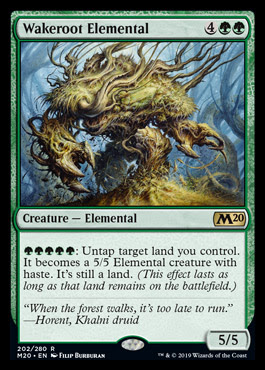 Basically unplayable as a six mana 5/5 but it does have one potentially redeeming feature in that it can generate infinite mana with a Gaea's Cradle type land in play (and six or more total creatures). While a terrible curve play it isn't the worst card to flop out when you have a foolishly high amount of mana either but that isn't a quality that is earning it any play on its own. 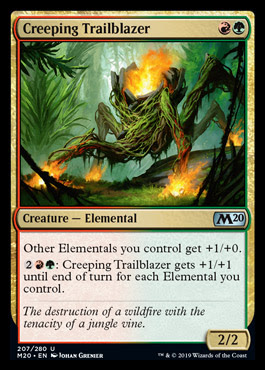 
Tribal card only but likely a good one being cheap, decently powered, and offering scaling potential. 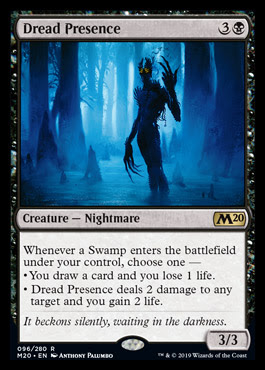 Well now this is some Hill Giant! Much as this can do some impressive things it would seem to be too narrow and have too low a floor to be a drafting cube card. It is a pseudo five drop, it requires you to have lands to lay that are specifically swamps. It isn't even that good when you make it and get one immediate trigger. You really need two or three triggers before the card is good. I guess you can cheat a bit with a sac land and an Urborg, Tomb of Yawgmoth! All told I think this will die to often and easily or not come out soon enough and end up not doing enough work. When it all comes together this card will be terrifying but mostly it will be a clumsy card. I think you can only really play this in mono black control decks or ones with very light splashes. 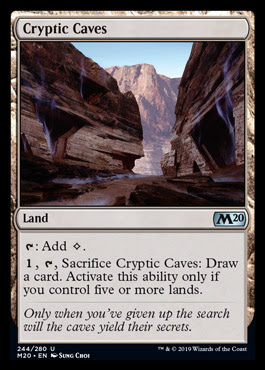 Useful but not frequently enough for the drafting cube, especially now we have more Horizon Canopy cards. I guess this is the colourless Canopy for Eldrazi or shops decks. When you are competing with cards like Ancient Tomb however I am not sure this really gets a look in. Just too many other better alternatives for the available slots. 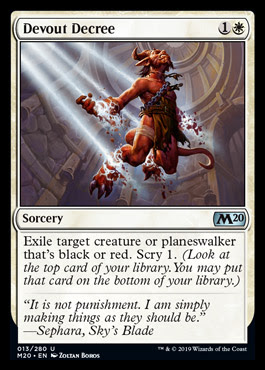 Powerful sideboard card that covers a lot of ground but fails to be a truly premium removal effect simply down to being sorcery speed. 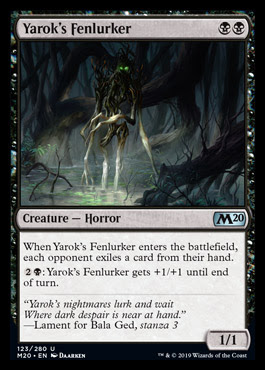 Intriguing take on Ravenous Rats. Exile from hand is a lot more painful than a discard which is more help than hindrance all too often these days. At 1B and just the hand disruption this would be in the drafting cube for sure. At BB it is going to be too narrow even with the extra pump. This has a home in devotion black decks and Cabal Coffers decks but I don't see it elsewhere. It is a support and setup card and in that role a BB cost makes it undesirable outside of the heavy black decks and thus too narrow. 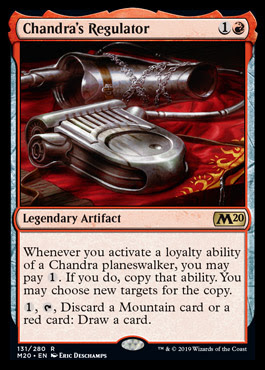 Well isn't this a spicy little gadget! It certainly makes me want to do a tribal Chandra list along with the Acolyte of Flame. It is almost good enough as a looter although it is rather locked to mono/heavy red decks. The copy effect makes it very dangerous when you have a Chandra in play and significantly increases the value of having them in your deck. This just sits in play looting until you have a Chandra and then it pretty much becomes a planeswalker itself, all be in one with a small activation cost. A bit like a Guardian Idol that rather than being a mana rock that turns into a creature is a looter than turns into a planeswalker. Sadly I think you need to be mono red and pack three Chandra cards in your non-aggro deck to really justify this card. Ideally more. With those stipulations we can pretty much rule this out for the drafting cube and restrict it to the meme level tribal planeswalker builds.